The road-ready Mission E Cross Turismo builds on the Mission E study Porsche demonstrated at the 2015 International Motor Show (IAA) and uses elements that are close to series production.

This car has many talents and is aimed at people who like to spend their free time travelling, playing sport and pursuing other outdoor activities. Thanks to the car’s all-wheel-drive, every ski slope is easy to reach, while the flexible interior creates space for all kinds of sports equipment and the modern load-carrying systems facilitate the transport of surfboards or a Porsche e-bike.

The strengths of the four-door four-seater include an emotional design with striking off-road elements, as well as an innovative display and operating concept with touchscreen and eye-tracking control. Measuring 4.95 metres in length, the concept vehicle has all-wheel-drive and an 800-volt architecture, prepared for connection to the fast charging network.

A low-cut bonnet between heavily curved wings: the front of the Mission E Cross Turismo reveals its relationship to the sports car icon Porsche 911 at first glance. The silhouette is defined by a sporty roofline that slopes off to the rear, which Porsche designers refer to as a ‘flyline’.

The Mission E Cross Turismo presents a picture as to what a Turismo model with features of a crossover utility vehicle could look in series production – a car that is equally suitable for travelling, everyday life and weekend adventure, filling the role of a versatile companion both in the city and in the countryside.

The interior reinterprets classic Porsche elements, bringing them into the digital age. The interior design features also include visible lightweight structures, which can be found on the instrument panel and other places as well as the sporty seats, reminiscent of those found in racing cars, with illuminated Porsche lettering.

Two permanent magnet synchronous motors (PSM) with a system output of more than 600hp (440kW) allow the Mission E Cross Turismo to accelerate from a standstill to 100km/h in less than 3.5 seconds and to reach a speed of 200km/h in under 12 seconds.

The 800-volt architecture of the vehicle ensures that the lithium-ion battery can be charged for a range of around 400 kilometres in just over 15 minutes. Charging of the concept vehicle is flexible and can take place on the road or at home. The vehicle is prepared for connection to the fast charging network, which is being created on arterial roads as part of the IONITY joint venture. Additionally, the battery of the Mission E Cross Turismo can be replenished using induction, a charging station or a Porsche home energy storage system. The latter is compatible with solar power generated by domestic photovoltaic systems. 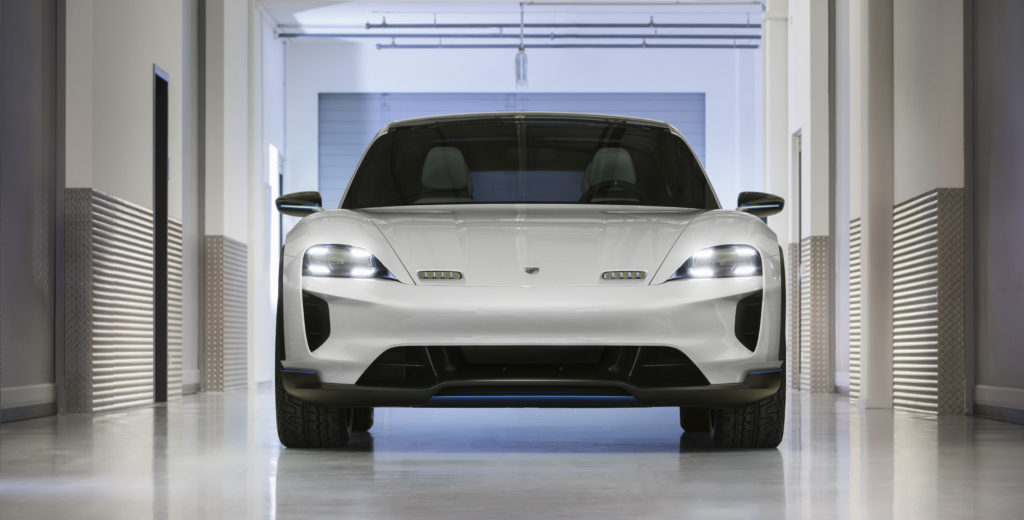