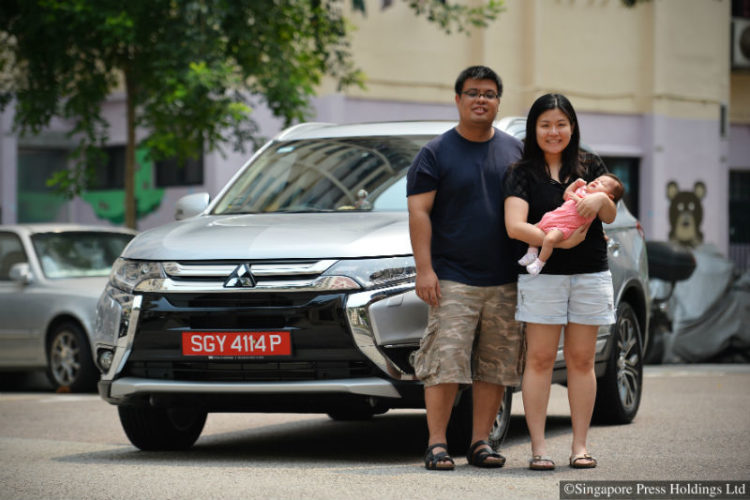 Jeosiah and Clarissa Wee with their child, photographed at Hougang on 11 September 2015. They are among a small but increasing number of car buyers and owners opting for the off-peak car scheme, even as the overall population of these red-plated vehicles on the roads continue to shrink.

Rebates for off-peak cars have to be raised by nearly half to get more young people to opt for the scheme.

Of 501 people polled, only 22 percent would consider a red-plated car over a normal car, based on the existing rebate of $17,000.

When the rebate was hypothetically raised to $20,000, only 22.8 percent said they would opt for off-peak cars, which cannot go on the road between 7am and 7pm on weekdays.

This went up to 33 percent when respondents were presented with a $25,000 figure.

“This would indicate that significant rebates have to be provided in excess of $17,000 before you see some real shift in demand,” said Dr Jack Loo, chief methodologist of Nexus Link, which conducted a survey commissioned by The Sunday Times on young people’s attitudes towards car ownership.

The rebate for off-peak cars can offset the certificate of entitlement (COE) price and registration fee in buying a new car. Owners also get a discounted road tax.

National University of Singapore transport researcher Lee Der Horng said a $25,000 rebate is a more substantial offset against the cost of a car, given that COE car premiums currently exceed $50,000.

Some respondents said the limited driving hours deterred them from buying an off-peak car.

Ms Hui Qing, 32, a human resources executive, said she would not buy an off-peak car even if the rebate is raised. “If I buy a car, it would be for the convenience to get to where I need to go, when I need to.”

Some experts said the scheme is outdated.

SIM University economist Walter Theseira believes it will eventually be phased out in favour of technological solutions such as the upcoming satellite-based ERP 2.0, which measures car use more accurately.

The current hours for off-peak cars do not necessarily correspond with periods when roads are less congested, he said. “It is a fairly crude way of measuring and controlling the demand for cars.”