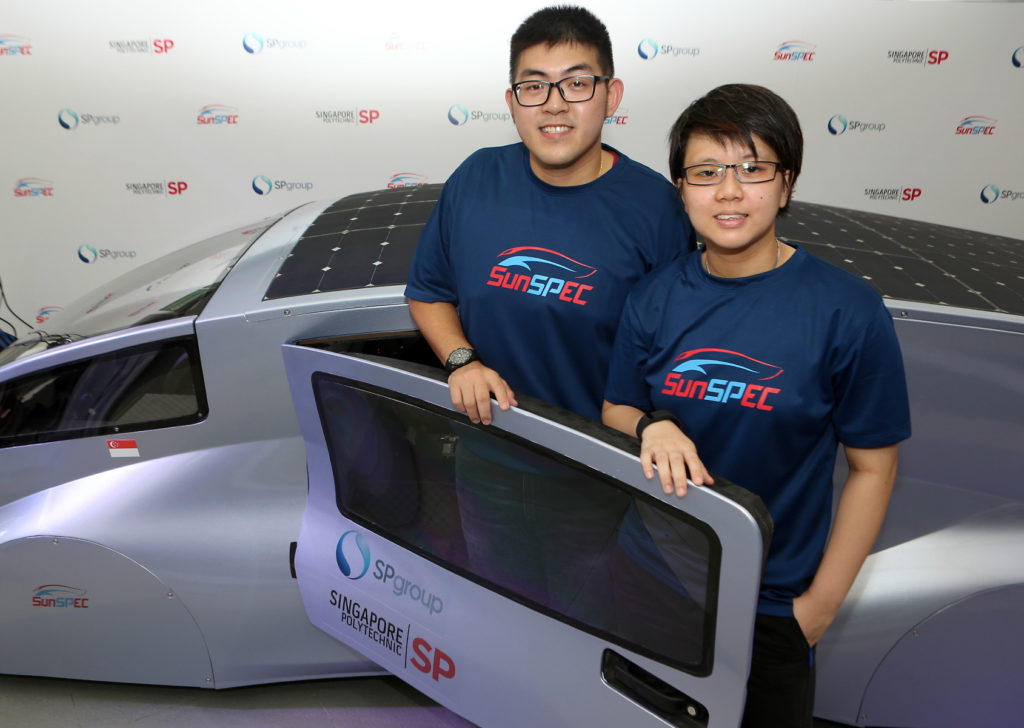 Singapore Polytechnic and SP Group has unveiled their most advanced solar car, SunSPEC 5, designed and built by 35 of the polytechnic’s students to take part in the biennial World Solar Challenge 2017 in Australia this October.

SP Group’s sponsorship of $1 million over five years for the team’s participation supports the students in developing innovative green technologies. Three SP Group staff, who are SunSPEC alumni, will also join this year’s team to contribute skills and experience, and serve as mentors to the current student cohort.

The SunSPEC 5 follows the creation of its predecessor SunSPEC4 in 2015, also supported by SP Group, which beat challenging odds to participate in World Solar Challenge 2015. The SunSPEC 5 will be Singapore’s sole entry in the World Solar Challenge, considered one of the world’s toughest and most competitive solar car races, alongside leading global universities such as the Massachusetts Institute of Technology and Stanford University.

The SunSPEC 5 team is competing in the advanced Cruiser Class category, which focuses on sustainable transport solutions and tests the car’s practicality and responsiveness to real-world challenges.

This year’s solar car represents another significant stride towards commercially viable applications of solar and energy storage technology. It has leapt forward with integrated dashboard telemetry, a commercial vehicle lighting system, and improvements to safety and ride comfort such as sports seats and adjustable steering positions.

Over the past two years, more than 60 students across various Singapore Polytechnic Engineering diploma courses have pushed their knowledge and skills to new heights by designing and building two solar cars to withstand the arduous road trip over 3000 kilometres in the Australian outback from Darwin to Adelaide. Besides learning to integrate their different disciplines, such as electrical & electronic engineering, energy systems & management, mechatronics & robotics, the experience hones the students’ resilience, creativity, and ability to solve practical problems.

SP Group’s Head of Corporate Affairs, Ms Amelia Champion, who has journeyed with the solar car team since the start of the partnership in 2015, said, “The spirit of innovation, resilience and passion among the students is unwavering from one cohort to the next. They have outdone themselves in delivering the latest SunSPEC solar car, which has pushed the boundaries in engineering and green technology.”

Read about another unusual race in Australia, between a Tesla Model S and a Qantas Boeing 737.

Read about the Holden Commodore’s final year of production as an Australia-made car for Aussies.