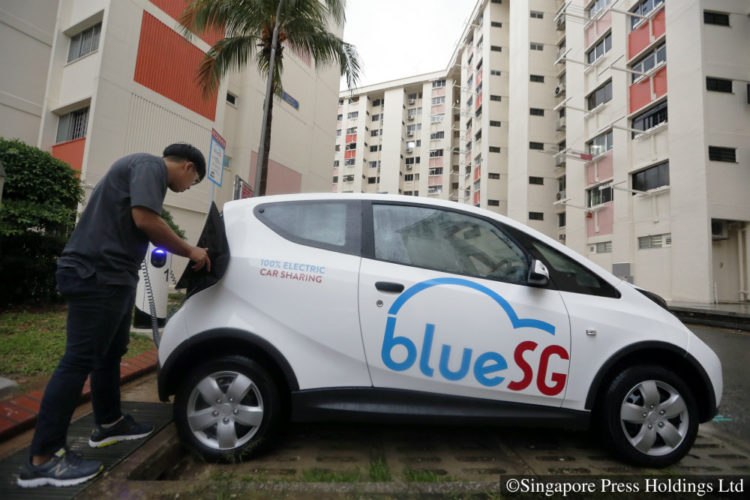 Mr Benjamin Ho returning the electric vehicle he rented at a charging station in Yishun yesterday. By 2020, the goal is to have 1000 of such green cars, along with 500 charging locations offering 2000 charging points.

Singapore’s first large-scale electric car sharing programme was officially launched yesterday, a milestone which some experts say could spur the greater adoption of zero-emission cars in the Republic.

For a start, users can rent one of 80 battery-powered hatchbacks, drive to their destinations, and drop the car off at any of the 32 charging locations in housing estates, the city, one-north and Science Park.

By 2020, the goal is to have 1000 of such green cars, along with 500 charging locations offering 2000 charging points – making it the second-largest electric-car sharing programme in the world.

The charging infrastructure and electric cars are supplied by BlueSG, a subsidiary of French conglomerate Bollore Group. The group has a similar electric-vehicle sharing scheme in Paris, with more than 4000 cars, currently the world’s largest.

Transport Minister Khaw Boon Wan, who launched BlueSG’s programme at a ceremony at the Singapore Flyer, said he supported the scheme on two fronts.

“First, it uses electric cars, a green initiative. Second, it is about car-sharing, making better use of resources. If BlueSG and similar ideas take off in Singapore, they will help realise our car-lite vision, enhancing our quality of life and making the city more liveable,” Mr Khaw wrote on Facebook.

About 2000 users have signed up for BlueSG. There are two subscription plans – one charges a monthly subscription of $15, and 33 cents for each minute of use. The other has no monthly fee, but charges 50 cents a minute.

By the end of this year, BlueSG aims to have 110 cars and 42 charging stations with 165 charging points. Next year, the plan is to roll out between 100 and 150 more charging stations, along with 250 to 300 more cars, said BlueSG managing director Franck Vitte.

Mr Vitte said it is in talks with City Developments (CDL) to place charging stations at Republic Plaza, Central Mall and Quayside Isle in Sentosa Cove. This makes CDL the first private-sector landlord to partner BlueSG.

Professor Subodh Mhaisalkar, executive director of the Energy Research Institute at Nanyang Technological University, said the BlueSG initiative establishes the electric vehicle charging infrastructure for Singapore, and will give drivers confidence to buy such vehicles.

As the Government is providing financial support to install the charging infrastructure, 400 of the 2,000 charging points will be opened to public use.

Prof Subodh noted that for BlueSG to be financially sustainable, cars must be well utilised throughout the day.

Dr Walter Theseira, an economist at the Singapore University of Social Sciences, was less optimistic. He said the value proposition for car sharing in Singapore is low, as there is good public transportation coverage, and taxis or private-hire services offer comparable charges. “It remains to be seen if BlueSG has a scheme which is dramatically better than other competitors, which have not achieved significant scale or profits in Singapore,” he added.

Mr Benjamin Ho, 28, who works in the IT industry, rented a BlueSG car to drive from Bedok to Yishun yesterday evening. The trip took 1hr 15min and cost him $26.

He said: “It won’t be my ideal choice during the peak hours as I will get stuck in the jam and incur costs. But I can consider it for off-peak travel. Still, it was a quiet and smooth drive.”