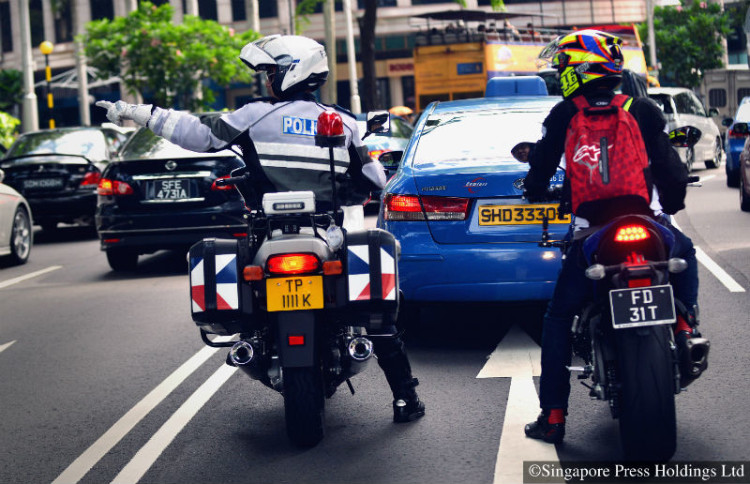 ASP Firdous Haniff (left) gestures to a goods vehicle driver and the passenger and orders them both to buckle their seat belts.

Motorists who flout traffic laws, such as illegally modifying their vehicles or driving recklessly, could face harsher penalties.

Under the Road Traffic (Amendment) Bill introduced in Parliament yesterday, maximum fines for these offences will increase.

Those caught altering their vehicles illegally can face a fine of up to $5000, a jail term of up to three months, or both. Currently, the maximum fine is only $2000.

For those caught a second and subsequent time, the penalty is a fine of up to $10,000, a jail sentence of up to six months, or both. This is double the current $5000.

The revised punishments will be aligned with similar offences in the Active Mobility Act, which spells out penalties for users who illegally modify their personal mobility devices and bicycles.

Fines for motorists who drive recklessly or dangerously will also be steeper. The current penalty under the Road Traffic Act is a fine of up to $3000 and a jail sentence of up to a year, or both.

The proposed changes to the law will see the fine raised to $5000.

For repeat offenders, the current penalties are a fine of $5000 or a jail term of up to two years, or both. The proposed changes will increase the fine to $10,000.

A specific punishment is also being proposed for motorists who leave their vehicles on the road in a way that can “cause danger, obstruction or undue inconvenience to other users of the road or to traffic”.

Motorists caught will face fines of up to $2000 or a jail term of up to three months, or both. Those convicted a second or subsequent time can be fined up to $5000, given jail time of up to six months, or both.

In the light of the development of self-driving technologies, changes to the law are also being proposed that will make it an offence for an individual to hinder or obstruct any trials involving autonomous vehicles.

As to what constitutes an interference, the text of the draft law says: “For example, curious bystanders may deliberately throw objects or walk in front of autonomous motor vehicles that are on trial, so as to test the reaction of the vehicle’s sensors.” The maximum fine for such an offence will be set at $5000.