Toyota i-TRIL is a future runabout for drivers who still wish to have fun while driving at slow speeds in urban environments | Torque
Loading posts... 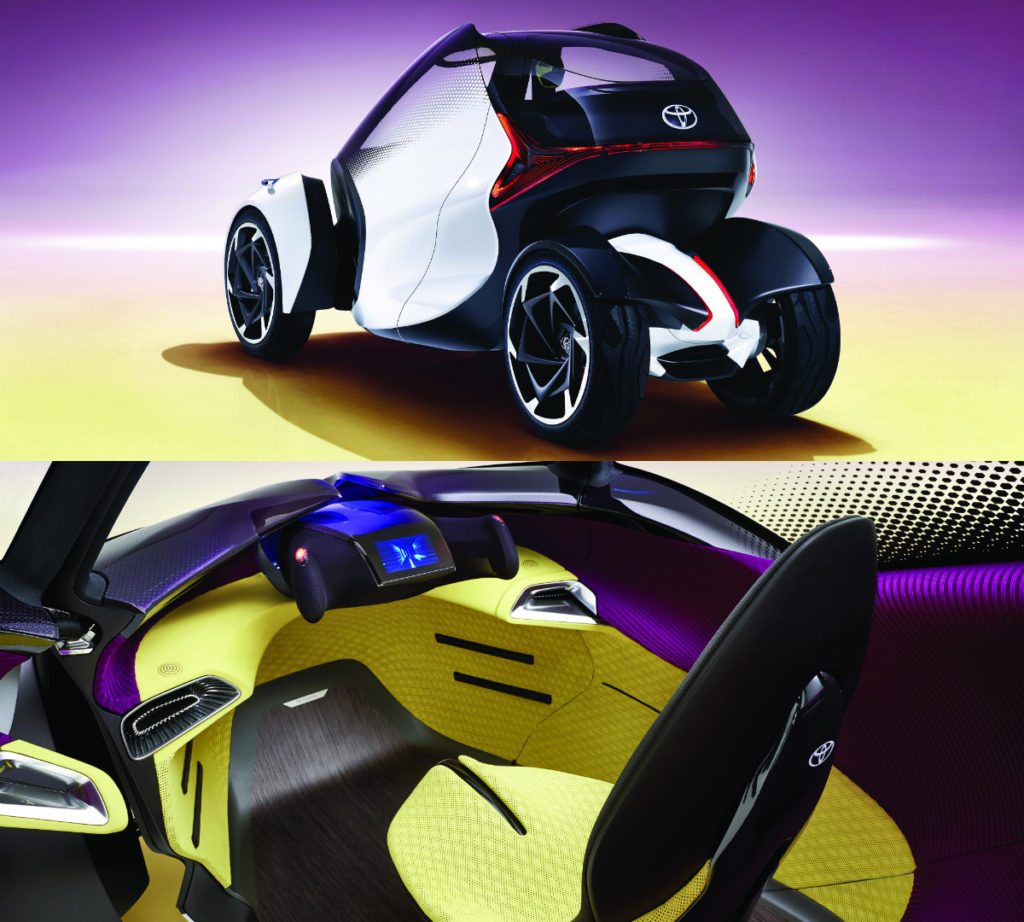 Heralding a change in mindset for motorists, the i-TRIL is designed to be more than a mere commodity. Driven by Akio Toyoda’s commitment to bring passion and driving pleasure to all future Toyota vehicles, it embraces the company’s Waku Doki (a Japanese term translating as “Beat of the Heart”) philosophy to demonstrate that future EVs can still stimulate the senses and set the pulse racing.

A different type of transport for those who still wish to have fun whilst driving even at slow speeds in the urban environment, it represents all the best elements of future mobility beyond mere eco-friendliness.

Driven by electric motor power and weighing just 600kg, the i-TRIL is 2830mm long and 1460mm high. It features 1200mm front and 600mm rear track widths, with a hinge between the rear axle and cabin allowing the vehicle body and front tyres to lean whilst the motorised rear tyres remain perpendicular to the road surface at all times.

With the front wheels and fenders clearly separated from the main bodyshell to facilitate the leaning of both the former and the latter, the cabin consists of a smooth, dark, cocoon-like central mass with no belt-line or door handles.

This is visually overlaid with a surface wrapping which undergoes a seamless transition between the body colour it shares with the front wheel arches and the transparent cockpit glazing, whilst emphasising the powerful forward movement inherent in the i-TRIL’s silhouette.

The butterfly-opening doors are hinged on the sloping A-pillars to maximise the opening area and ease of cabin entry to even the rear seat passengers, whilst requiring no more opening room within a carparking space than conventional doors.

The robustness of the vehicle architecture and the added width of the rear cabin to accommodate a two-seat bench are reinforced from behind by the full-width combination lamp design above a clearly separate rear axle structure, which incorporates the electric motor drive system.

Allied to 25 degrees of front wheel steering, this technology equips the i-TRIL with a turning circle of just 4 metres (similar to that of the Toyota iQ), making it not only highly engaging to drive at even modest speeds, but also very much at home in even the most congested urban environment.

Targeting an actual driving range of more than 200km between charges, the new Toyota concept is capable of operating autonomously, but has been specifically conceived to provide such driving pleasure that owners will wish to drive themselves for the majority of the time.

The i-TRIL has no pedals, enabling the driver to stretch out his/her legs in comfort, and wear whatever style of footwear he/she chooses without risk of losing control of the vehicle. The base of the driver’s seat features a central rib to offer a snug, highly supportive fit for the occupant’s legs.

Steering, acceleration and braking are all carried out via drive-by-wire technology. The i-TRIL is operated by left- and right-hand control nodes (in the manner of computer mice or game controllers), which extend towards the driver’s hands beneath the stretch fabric covering the manual driving module.

During autonomous driving, the left- or right-hand instrument panel extremities automatically illuminate whenever the i-TRIL is about to enter a corner, letting all occupants know which way the cabin is about to lean.

There are no other controls or switchgear, and no driver’s instrument binnacle. In manual driving mode, a simple head-up display gives the driver all the information he needs. A completely new approach to the Human Machine Interface (HMI) focuses on voice activation technology, communicating with the vehicle’s Artificial Intelligence for the control of multimedia and infotainment systems.

With its One-plus-Two seating layout, the i-TRIL redefines interior space and spaciousness. Current interior design philosophy hinges on everything being built around the driver, with rear seat passengers very much regarded as second-class citizens.

Allied to the vehicle’s Active Lean technology, the i-TRIL interior allows the rear bench seat passengers to become much more involved in the driving experience. For instance, it brings children very much closer to their mother, without actually interrupting her space.

Better yet, it affords them far greater forward visibility, uninterrupted by a front seat headrest immediately ahead of them. The front seat headrest is actually fixed to the roof of the vehicle, and pivots down into position when the i-TRIL is switched on. Children also benefit from extensive legroom either side of the front driver’s seat. And there is, in fact, room for three adults on board as a result.

Careful consideration has been given to how the driver enters and exits the vehicle as easily as possible. When the cabin doors are opened, they remove a section of floor with them to narrow its footprint and make stepping out simpler, with a shorter stride. Moreover, the front seat may be swivelled through up to 20 degrees to allow the driver to both enter and leave the cabin more decorously.

The interior has been designed specifically to avoid an overtly automotive feel – rather, the Alcantara trim, fabric rear bench seat upholstery and wooden floor finish, all made from recycled materials, offer occupants a more comfortable environment styled on a comfortable and exclusive living space in the home. A ducting system distributes ventilation airflow on board.

The ribbed texture of the rear bench seat fabric radiates outwards to emphasise the width of the rear cabin space. In addition, the tread pattern of the Goodyear 19-inch front and 20-inch rear tyres has been exclusively cut to match the design of the interior trim. 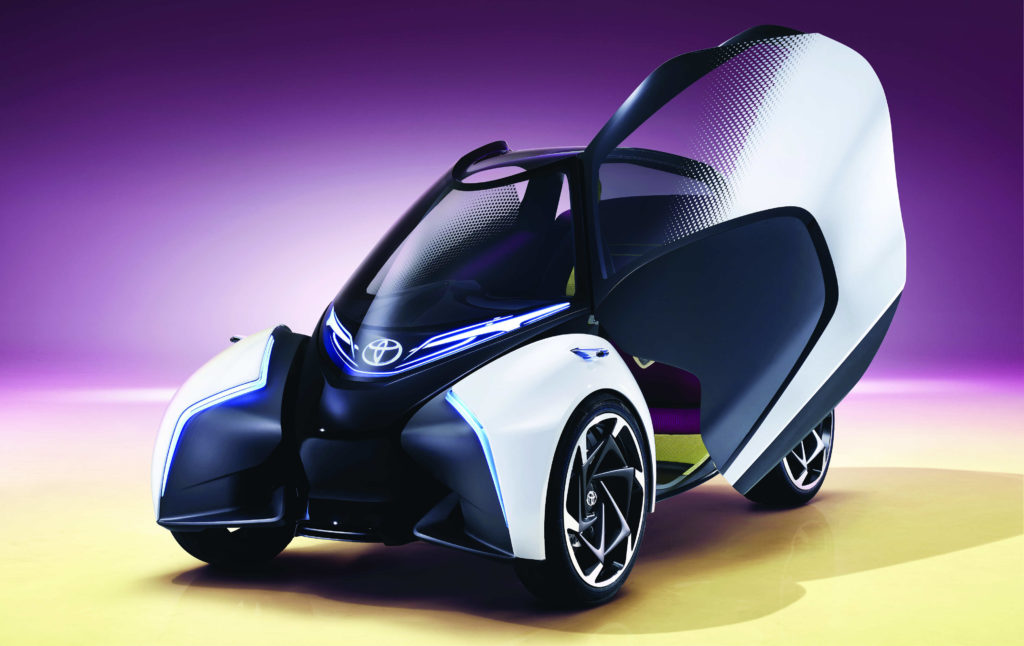 Check out Kirobo Mini, a Toyota gadget that provides companionship.

Porsche unveils the 911 Targa 4S Heritage Design Edition
This site uses cookies to help us serve you better. By continuing to explore our site, you accept our use of cookies.I Accept