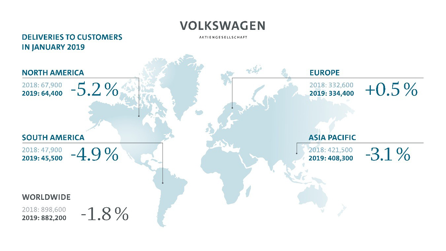 The Volkswagen (VW) Group sold 1.8 percent fewer cars in January, dented by persistent market weakness and the cold snap in the US.

The group delivered 882,000 vehicles to customers worldwide in January 2019, down 1.8 percent from the same month last year.

However, the group says it has succeeded in winning market share despite softening demand.

“The Volkswagen Group made a solid start to the new year with relatively stable delivery figures. The fact that we won market shares in a broadly declining overall world market is a good result,” said head of Volkswagen Group sales Christian Dahlheim.

“It shows the strength of our brands and their products. The persistently volatile geopolitical environment and looming economic risks in individual markets will have a decisive impact on our business this year, and I believe China and Brexit will present us with special challenges, particularly in the first few months of the year,” Dr Dahlheim noted.

Spanish brand Seat notched a 14.2 percent increase in January sales to 44,500, the biggest gain among the group’s passenger vehicle brands.

In the Asia-Pacific region, the Volkswagen Group sold 408,300 vehicles to customers in January, down 3.1 percent down on the same month last year.

In China, the Group’s most important single market that currently accounts for 44 percent of all deliveries, 387,300 customers took delivery of their new vehicle from the Group family, 2.9 percent down on January 2018.

“Even though the Group was not entirely immune to the generally declining market trend, it nevertheless managed to increase its overall market share still further,” VW said.

VW group performance was “especially strong” in Central and Eastern Europe, where 56,100 vehicles were delivered, an increase of 3.3 percent.

The Group delivered 64,400 vehicles to customers in North America in January, a decline of 5.2 percent.

VW said the severe cold snap at the beginning of the year, which hit the Midwest particularly hard, was a crucial factor.