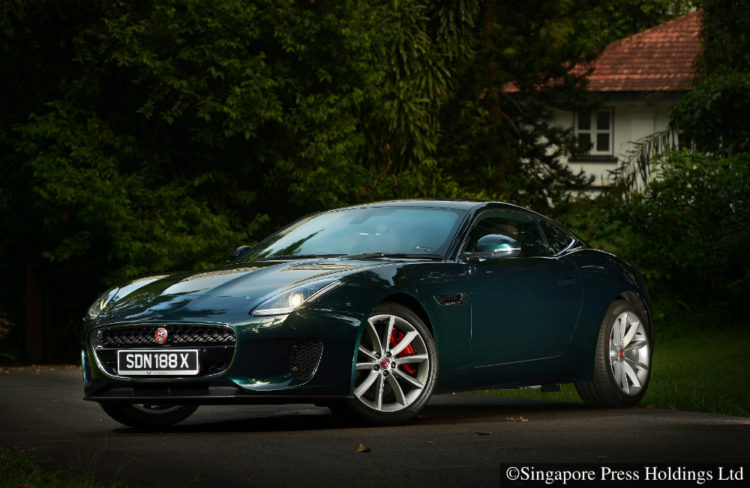 A turbocharged 2-litre 4-cylinder engine for a two-door Jaguar coupe wearing 19-inch wheels and British racing green paintwork must be a lark.

Surely, this cannot be related to the fire-breathing 5-litre V8 which sounded like dragons in a dungeon when it heralded the arrival of the F-Type four years ago?

But many things have happened in those four years. The world has grown even more carbon-conscious. Engines have been miniaturised. Many dragons have been slayed.

The current line-up consists mainly of 3-litre V6s with 340 to 400 horses. Against these tamer cats, the 2-litre new arrival does not seem too shoddy.

Although not quite qualifying for the word “fiery”, these numbers are still fairly respectable.

Porsche’s 2-litre Cayman – with similar outputs – is quicker and faster, but it is also a visibly smaller and, hence, lighter car.

A comparison with the Cayman is only natural. A Porsche with a 2-litre engine is still a novelty – one made necessary by the same factors which spawned the 2-litre F-Type. Both are two-door, two-seater coupes.

But that is where the similarity ends. The front-engined Jag is a different proposition. It proffers elegance, smoothness and low-effort motoring. The mid-engined Cayman, on the other hand, is a hyperventilating toy for track novices.

With a creamy 8-speed automatic transmission, the F-Type’s attack on the tarmac is more measured.

While acceleration can come in heaps, the inclination for anyone behind the wheel is to adopt a more leisurely view of the world.

There is, however, the occasional temptation to put the car in Dynamic mode, activate the sports exhaust and rev the engine to kingdom come.

At around 4000rpm, you hear faint notes of pop and crackle – which arrive in buckets in the bigger F-Types. At lower revs, the aural accompaniment is a somewhat sporty percussion that is a mixture of V6 rumble and diesel clatter.

The endearing thing about the F-Type 2.0 is that it is not wild and frenzied like the 5-litre. On public roads, it is a more civilised beast. Squeeze its throttle too hard out of a bend and you will not risk ending up in a ditch.

It is a product that is better suited to the disposition of folks who enjoy cars that are fast but not necessarily furious, which presumably make up the majority of people.

A beautiful car, however, is appreciated by all.

On that front, the F-Type still has it. The car has been refreshed cosmetically, with a bolder grille flanked by large aggressive-looking intakes. Vents on its expansive bonnet are more prominent and look like part of the bigger picture instead of coming across previously like add-ons.

The 2-litre gets a single large rhomboid tailpipe set within a pronounced rear diffuser assembly. This is actually sportier looking than the multiple pipes poking out of its more decorated siblings.

Inside, the F-Type looks the part of a proper Jaguar too. It is well furnished and finished, unlike the 2-litre Jag F-Pace tested recently.