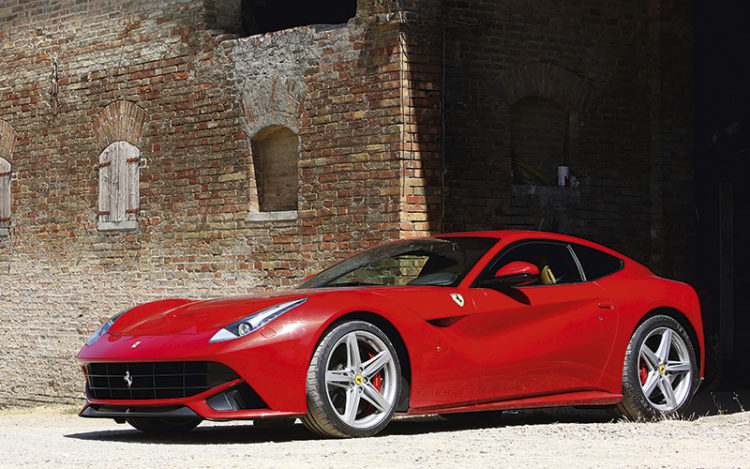 Physics does not know where the engine is – so declares Franco Cimatti, Ferrari’s head of vehicle architecture, when describing the front-engined F12berlinetta’s near-perfect weight distribution.

Indeed, rules of physics do not seem to apply very strictly to Ferrari’s latest flagship. If they did, the supercar – the most powerful street-legal Ferrari ever – might well execute a wheelie when its 740bhp V12 unleashes its full complement of power to the fat rear rubbers.

Instead, the F12 takes off cleanly and hurls itself down the tarmac with no histrionics, displaying the balance and poise of a mid-engined sports car. Despite its obscene output, it is completely controllable, rarely intimidating, and it manages to be entertaining and convincingly fast even if the driver is less than brilliant. This supercar may be the wildest and quickest road model Ferrari has ever made, but it is also one of the most driveable. 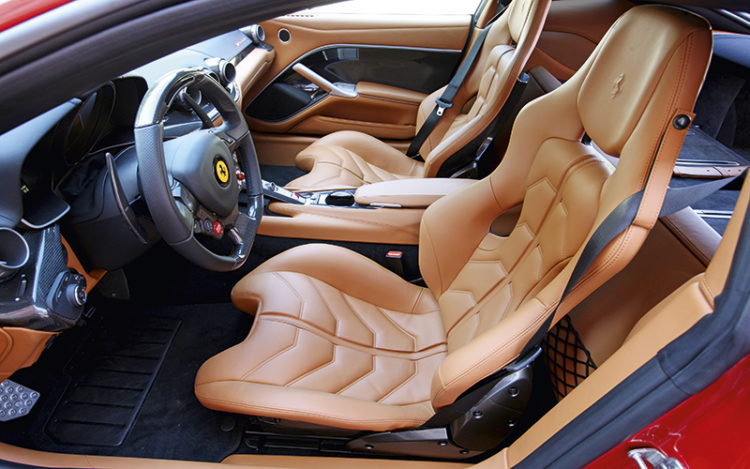 While the car is outwardly similar to a grand tourer (it is about the size of the Mercedes SL, except broader, lower and with shorter overhangs), it behaves very much like a taut and sorted coupe.

The paradox extends to its heart. The F12’s V12 is of the same block found in the FF, but while the latter produces 660bhp, the F12 unit churns out 80bhp more thanks to a slew of technological wizardry such as multi-sparking, multi-hole injection, knock prevention and super-polished bits such as cams and tappets.

But the biggest trick must be the resonators on the cylinder head. Used for the first time, the devices create a similar effect as supercharging, only without moving parts and without lag. The big V12 is thus able to have a highly efficient compression ratio of 13.5 to 1, giving it a steep power curve that does not taper till well over 8000rpm on the dial. 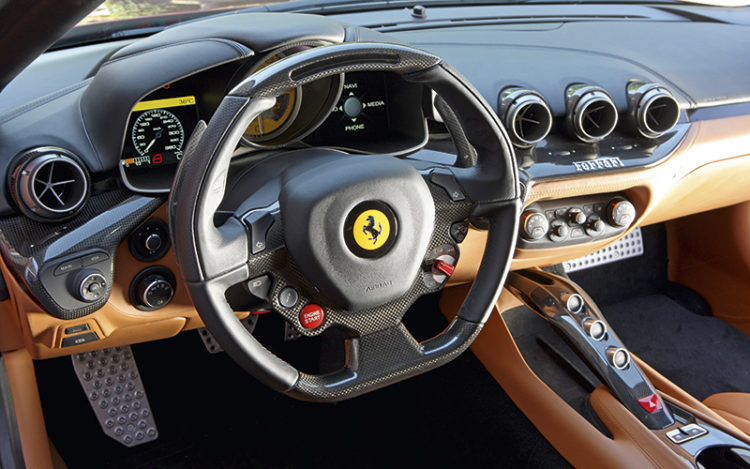 This is pure petrolhead heaven, trimmed in fantastic Frau leather and equipped for “F1” fun.

There is explanation for the F12’s physics-defying poise, too. Its V12 is positioned as far back from the front axle as possible, while the fuel tank is moved up towards the driver. The car’s 7-speed dual-clutch transmission is slotted in an impossibly tight space between the engine and the firewall. The engine ended up being so close to where the windscreen ends that it wasn’t feasible to tuck the wiper beneath the bonnet, even if that would improve aerodynamics and aesthetics a wee bit more.

As a result, the driver sits very close to the Ferrari’s mechanicals, giving him a certain “oneness” with the machine. He is also seated close to the ground. Even though the F12 is lower than the 599 it replaces, there is ample headroom, even for six-footers, but more on the cabin packaging later.

Another paradox lies with the car’s shape, which is traditional GT yet unlike something you would associate with an above-340km/h projectile. Ah, but the F12’s curvaceous body is an aerodynamic temple. Aero bridges on either side of the bonnet help the car cheat the wind, as well as generate downforce on the bonnet. Discreet “blown” spoilers in the rear create further downforce. 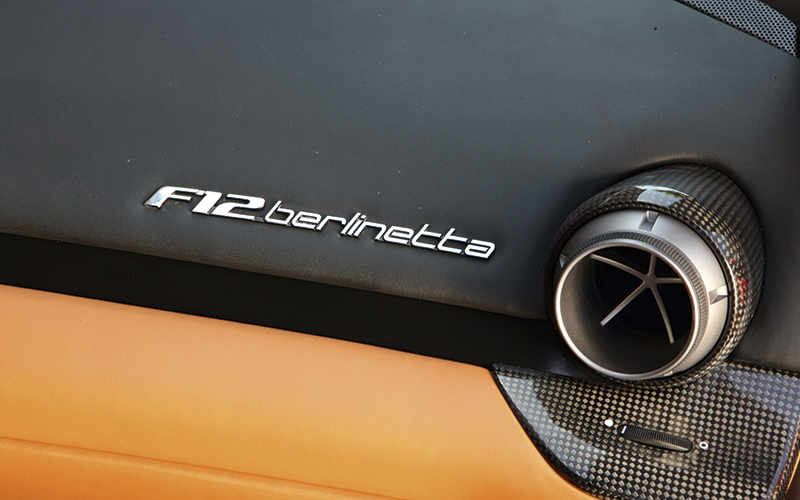 At 200km/h, the car has 123kg of downforce – an unbelievable 90 per cent more than the 599 GTB, and without the unsightliness of huge wings that afflict other racers. Its underside is also completely flat. All in, the car is twice as aerodynamic as the already “slippery” 599.

The F12berlinetta is also an exercise in extremes. Its power delivery, for one, is civil and brutal at the same time. Civil because throttle response is beautifully linear, making the car as driveable on a circuit as on a narrow street downtown. Brutal because the acceleration the powertrain affords literally sends blood rushing to your head. 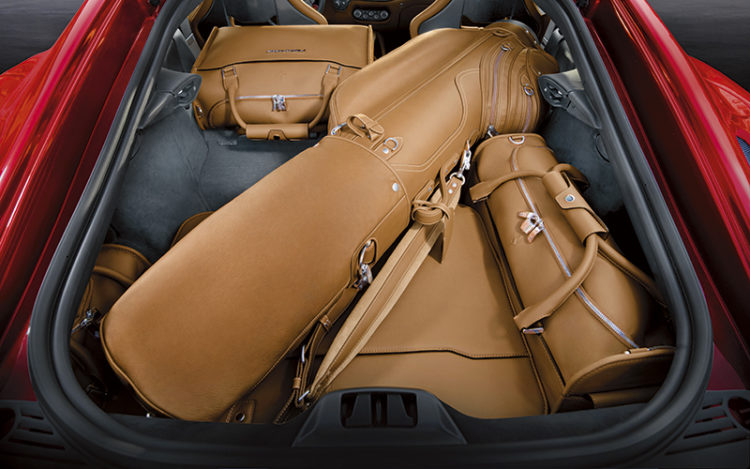 While two-wheel drive pretty much restricts its 0-100km/h timing to above three seconds (the F12 does it in 3.1sec, to be exact), the car blasts off from a standstill to 200km/h in 8.5 seconds. That’s even quicker than its closest rival, the 700bhp V12 Lamborghini Aventador.

The numbers and the engineering don’t tell the whole story, of course. Driving it does.

The F12 is truly wonderful to behold when unleashed on bitumen, especially the kind that is designed to let supercars exploit their dynamics. Like Fiorano, Ferrari’s proving ground, replete with a series of sweepers, sharp bends, a hairpin and undulations that make a jaunt in a fast car seem like a roller-coaster ride. 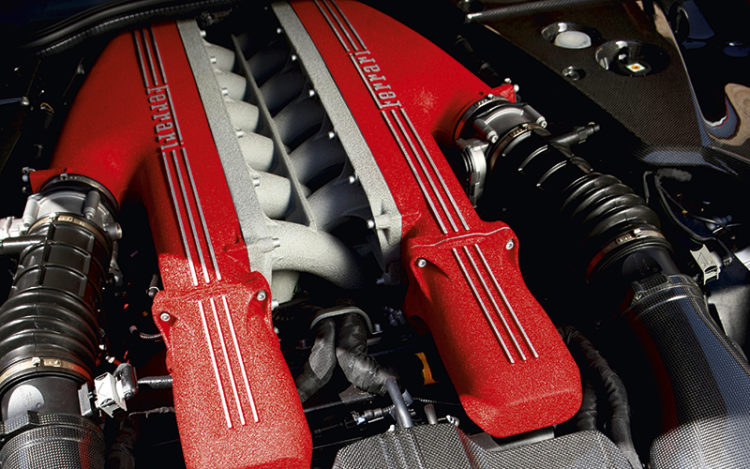 On the track, the F12 impresses firstly with its very stable, balanced and controlled behaviour. There is not a hint of the nose-heaviness expected of a big-bore, front-mounted V12. Or indeed, overall heft.

It feels a lot sharper than all other GTs, with incisive turn-in, immense grip, and highly responsive steering. Its tautness dispenses plenty of confidence, allowing any driver to go faster than he normally would on unfamiliar grounds.

The F12’s naturally aspirated V12 works well with its dual-clutch 7-speeder, with the car knowing exactly which gear to be in even before the driver does. In Race mode and left to its own devices, the vehicle often behaves like it is sailing through the winding course, rather than labouring with forces made famous by one Isaac Newton. 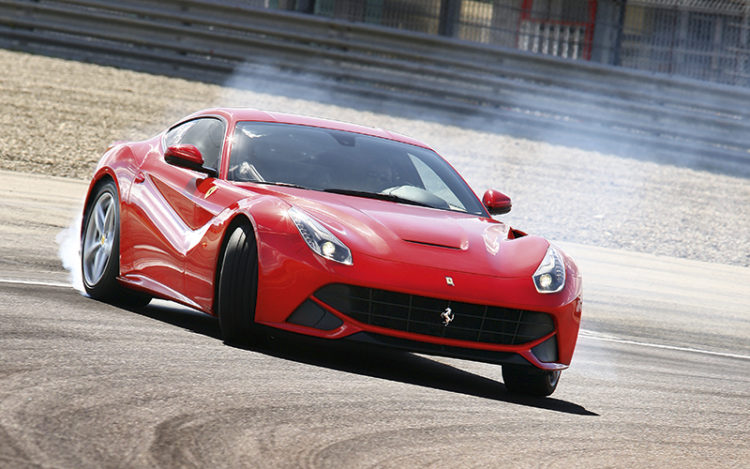 One other thing about the gearbox: It remains smooth and seamless when dealing with monumental forces. That means greater comfort and great efficiency, especially in sustained acceleration that requires plenty of cog changes.

Power delivery is predictable and linear, with no blank spots. Which means it is unlike a number of supercars, which tend to have an all-or-nothing approach to dishing out velocity. 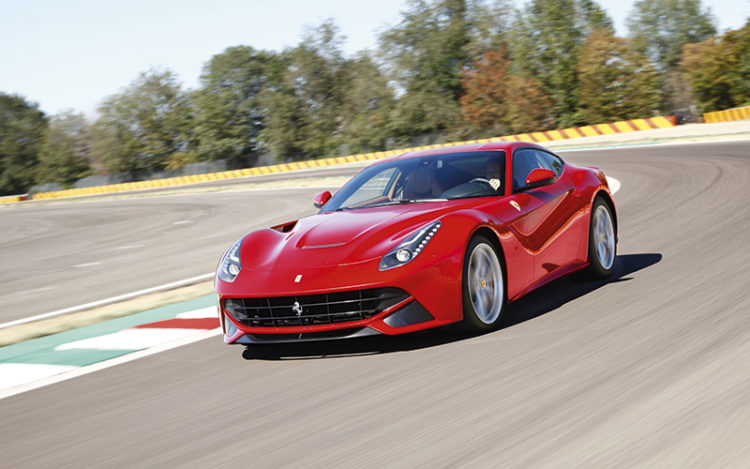 This Ferrari is easy to drive fast, and much credit for this lies with its battery of electronic traction and stability aids. Their application in this case is far less obtrusive than expected, reining-in just enough power to keep most fast corners from being overcooked, but never leaving the driver in the lurch, even for a moment.

The ESP (electronic stability programme) intervenes just a split second after the adhesion point is breached. You will clearly sense the tail going out a bit, but the car allows you to recover easily. Likewise, the anti-lock braking system works without any trace of judder or shock.

In other words, this Ferrari newcomer makes you feel like a hero. Simply brilliant. 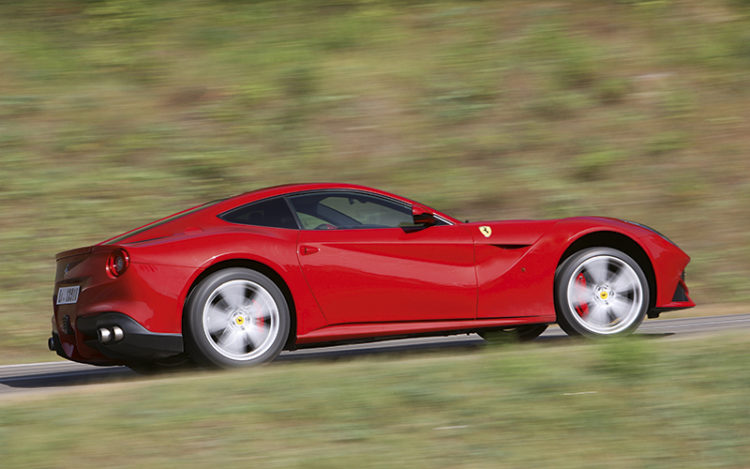 It isn’t perfect, of course. The brake pedal does not feel as firm as I would have liked it to be, and the brakes start to squeal after a number of rounds on the track. Even so, they offer a very progressive response to foot pressure. To stop late, full-weight stomping is required. Then again, we are talking about a car that gushes speed like an open dam. Ferrari says it takes 131m to come to a halt from 200km/h – a useful seven metres less than the 599 GTB’s stopping distance.

Despite so much horsepower going to the rear, the F12 never loses traction unless you switch off the traction control. But despite doing so, the resident Ferrari test-driver had a relatively hard time smoking the rubbers and doing doughnuts. This Prancing Horse is that stable.

If the F12 is likened to a domesticated stallion, it is one that has not shed its bronco ways entirely. Floor the accelerator and you get lethal acceleration that literally pins you to your seat. Cornering g-forces are merciless, and yet those rubbers stick to the tarmac like second nature.

The 3km, 12-turn Fiorano track is thus tameable and very entertaining, with the F12 at your command. Occasionally, you are able to kick-down the powertrain and let the V12 roar to redline, enjoying that intoxicating surge before easing off and applying the brakes. 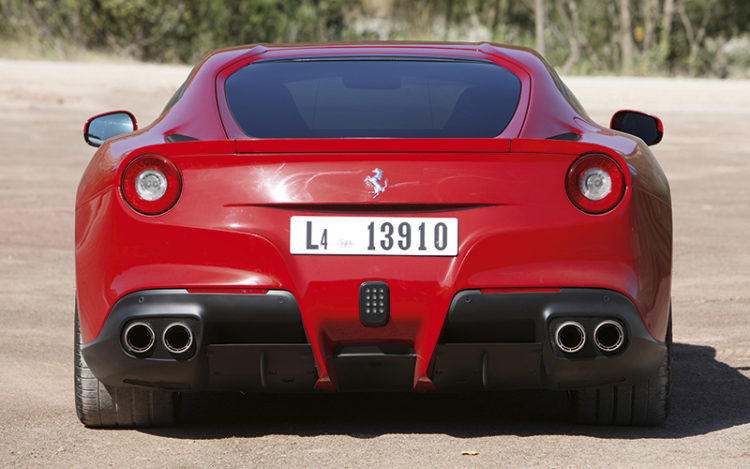 Occupants get to enjoy the rich bassy notes of the car as much as folks outside. The F12 has twin acoustic ducts that go from the intake to the cockpit, channelling the engine’s aural delights (and nothing else) to those inside.

Indeed, there is plenty to like about the F12. Its tight steering ratio allows you to tackle very sharp turns without either hand ever leaving the steering wheel. As superlative as it is, it offers a lot of accessible fun. It has none of the weightiness and unwieldiness that rob you of immediacy and intimacy. Instead, it works well with the driver, bringing out the best of his or her abilities, and injecting a good dose of high jinks to offer a tyre-screeching, pulse-raising, ball of a time. This car is sharper, more nimble and clearly more capable of tearing up the track than you would expect of a GT.

On the open road, the F12 is wonderfully relaxed and steady, with a driveability that often escapes high-powered machines. While others tend to be high-strung racer refugees that deliver performance with the finesse of a jackhammer, the F12 has all the traits that make an easygoing, confident cruiser for long hauls. 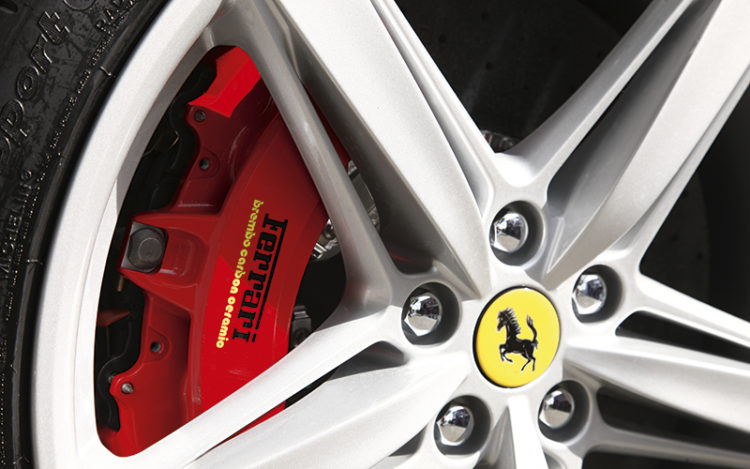 At 80-90km/h and in seventh gear, it is nearly as quiet and fuss-free as any big-displacement limo, with the faint drone of its V12 actually being masked sometimes by road noise. Yes, its ride is stiff, even in the softer damping mode, but it isn’t harsh or trashy.

There is plenty of creature comfort elsewhere. For instance, a new infotainment system that incorporates satellite navigation, voice control and connectivity to mobile devices. The boot area offers more than 300 litres of stowage, but if you remove the parcel shelf, you have 500 litres – comparable to cargo space in a big saloon.

Even though it’s more compact than the 599, the F12 does not compromise on roominess. This has much to do with its new bodyshell structure and panels, as well as brilliant packaging. The cabin is sturdily built, which you can never take for granted in an Italian car. As if to prove a point, the test route included a stretch over broken tarmac. The surface is so bad it might as well have been unpaved, but the F12 went over it with nary a squeak. 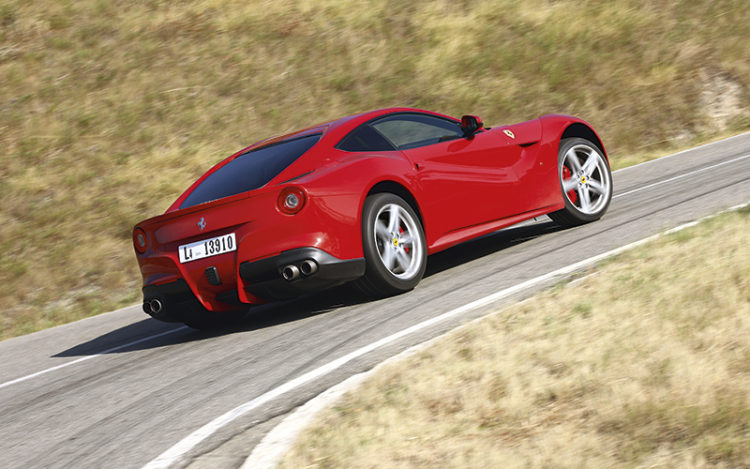 Supercars tend to treat the passenger as an inanimate object. But in the F12, the passenger gets sporty metallic footrests and a linear digital display providing information such as navigation, revs-per-minute and gear position.

The F12berlinetta is quite a complete package. But just to drive home an additional bonus, Ferrari offers it with seven years of free maintenance – an industry first. It also comes in a striking new colour: matte aluminium. It is a pretty costly option, but even if you go for that, the car will still be significantly more “affordable” than its archrival from the Lamborghini camp.

Now, that’s something physics can’t quite account for either.