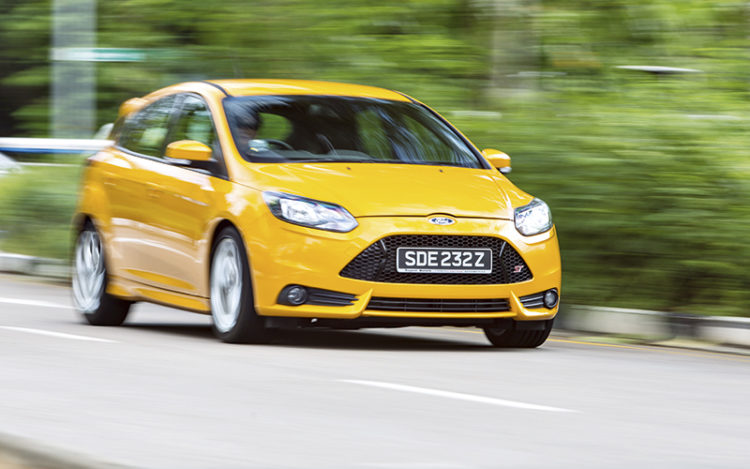 The faster this racy hatchback goes, the fitter it feels.

Ford no longer fields a factory team in the World Rally Championship, citing current economic difficulties and the need to redeploy resources. The American automaker has been active in world-class rallying for over 30 years, during which it brought home three constructors’ trophies, two drivers’ titles and numerous event victories. But the firm’s withdrawal from the ultimate form of grassroots motorsports isn’t a complete exit, with Ford still providing technical support for its UK-based WRC “co-driver” M-Sport, which is working on rally derivatives of the Fiesta supermini.

Another kind of Ford technical support, for “privateer” boy racers who have grown into young corporate executives, is the hot rod you see here. It is the new Focus ST, engineered by the Sport Technologies division that gives the Blue Oval a touch of blue thunder. 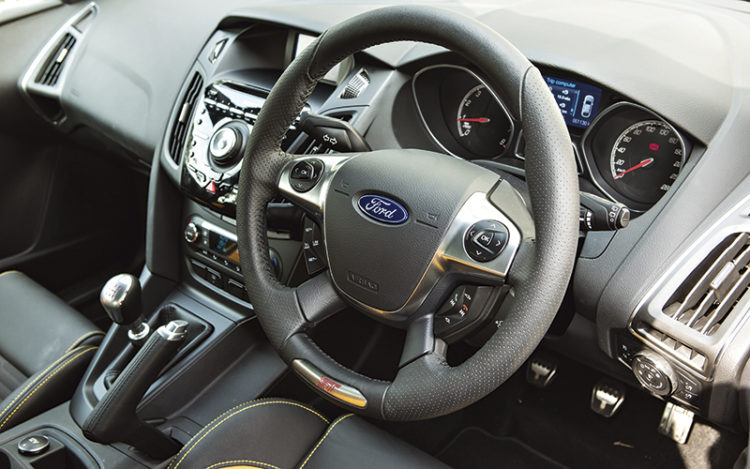 In this case, it’s actually thunderous orange, louder than anything this side of a yellow RenaultSport. Called Tangerine Scream, this flashy paint job is unique to the go-faster Focus, and it sort of matches the yellowish halogen headlights (a downgrade from the previous model’s standard HIDs). The car is also available in quieter colours, such as Race Red and Spirit Blue, for motorists who don’t wish to be the focus of attention.

Unfortunately for them, the body has other attention-seeking parts that do not depend on colour to grab eyeballs. That large wing atop the tailgate, for instance, which would be cleared for take-off if the vehicle were anywhere near Seletar Airport. 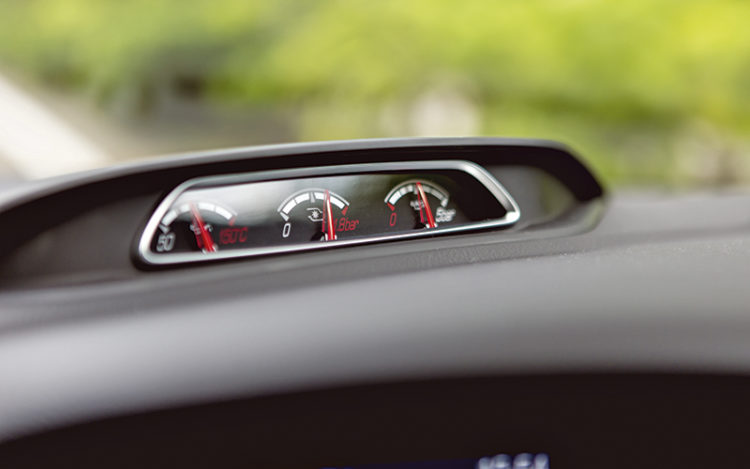 Then, there’s the unusual hexagonal exhaust tailpipe, protruding from the centre and looking like some Murcielago ripoff. More unofficial Lamborghini influence is evident in the 18-inch alloy wheels. And that trapezoidal honeycomb grille surrounds the front licence plate like a battlement, ready to do battle with road hogs and whatnot. Also making sure that nobody mistakes this for a soft Focus are sizeable red “ST” badges on the front and rear.

Of a good size, too, are the front Recaros in the five-door cabin. Upholstered in a grippy, hardy combination of cloth and leather, with colour-coded patches and threads, and bolstered so aggressively that they’ll reject (or eject) fat people, these are seats made for speed. 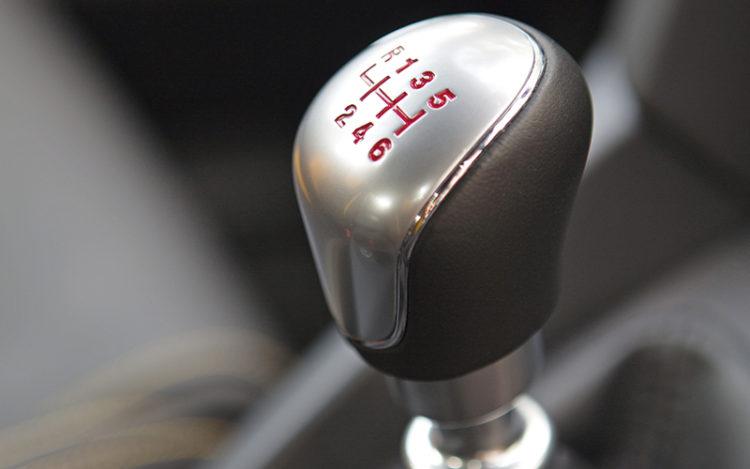 The same goes for the cluster of dash-top gauges angled towards the driver. They keep track of the oil temperature, oil pressure and turbo boost – which is especially useful at a track day. Of use every day, away from the racetrack, is the multi-function display between the main instrument meters, which has fanciful pictograms and a helpful trip computer.

Bringing the engine to life is a small “Ford Power” button, with the power in question being anything but small – 250 brake horsepower and 345 Newton-metres from a Borg Warner-turbocharged, double-camshaft 2-litre 4-pot. That’s a healthy specific output of 125bhp per litre – 40 percent higher than the 2.5-litre predecessor, with fuel consumption almost 30 percent lower at the same time. Feeding the juice to the front wheels is a 6-speed manual, the sole transmission available, which means the Focus ST is a closer rival to the manual-only RenaultSport Megane than to the DSG-by-default VW Golf GTI. 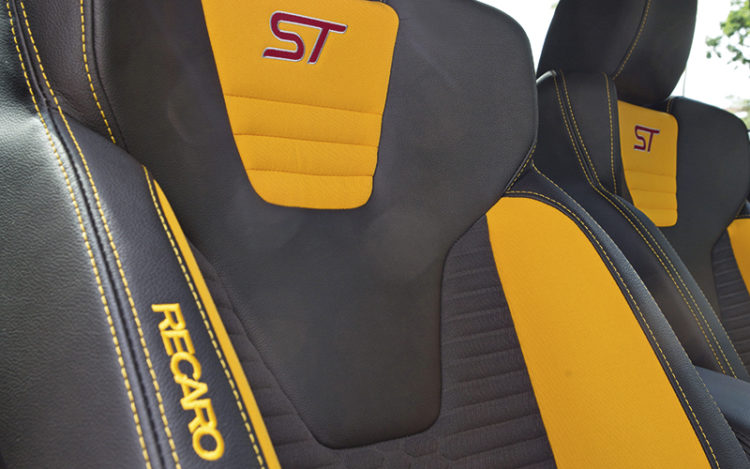 These really supportive Recaros stop “body” roll, but might not suit the roly-poly.

It’s a user-friendly 6-speeder, with an easy clutch action and smooth, short travel between the gear gates. The knob could be “stickier” though, to facilitate rapid shifting, and there is a notchiness in the ’box you won’t experience in a classic Type R Honda. The Focus also has an in-dash gearchange prompter to remind the driver to change up or down for efficient running, although it’s unlikely the petrolhead at the wheel will be heeding the up/down prompts when he’s heading towards the next bend in double-quick time.

On the attack, this hatchback sounds good from the inside, and even better from the outside. The exhaust system produces a promising burble at rest, which becomes a bellow when the engaged revs go high enough. It’s not noisily antisocial (like the riotous old Focus RS), just sporty sounding, with some assistance from the engine intake’s so-called sound symposer. 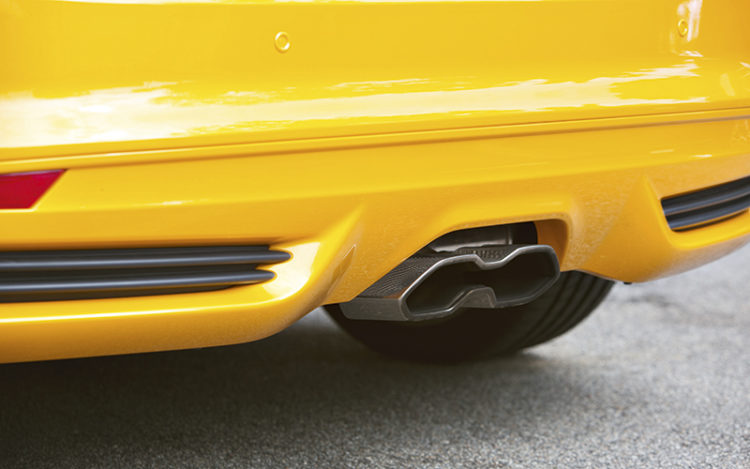 It’s speedy, too, of course. First gear takes the car to nearly 70km/h and second gear takes it to just over 100km/h, stopping the century sprint stopwatch at 6.5 seconds – respectable compared to the 6.6sec GTI E35, less so compared to the 6sec RenaultSport Megane. Mid-range acceleration from 3000rpm upwards is punchy, so overtaking on the highway (or anywhere else) is over in a jiffy. Thanks to the cool, wet weather we’ve been experiencing lately, the Focus’ “turbo charge” is probably a bit stronger than normal, I reckon.

There is some torque steer on uneven tarmac, but it’s never excessive or terrifying. In fact, it’s entertaining once you get the hang of it, although the uninitiated would be curious about the slight tugging sensation. Wheelspin is also served up in spades when the traction control is disabled along with whatever self control is left after finding out how fast this Focus can go.

Interestingly, the electronic stability control (or ESC) takes a while to change to the Sport or Off setting, like it’s copying files or something. Anyway, indulging in silly wheelspin not only burns rubber tread, but also wastes time. 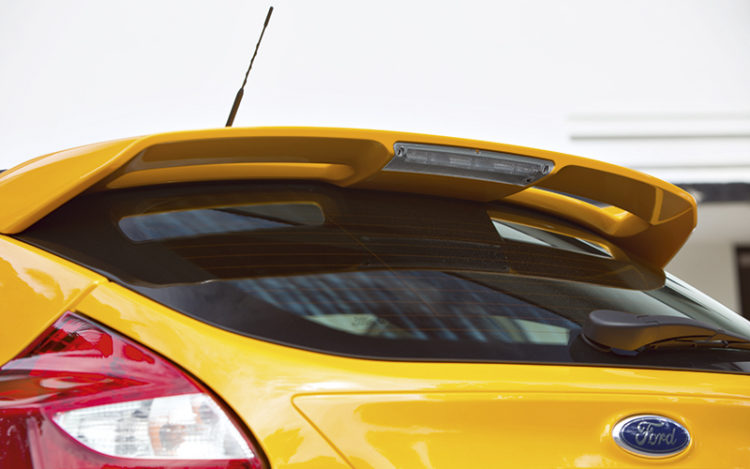 Your time at the wheel is better spent focusing on the important stuff – handling, roadholding and “feeling”. And the Focus ST delivers at every opportunity.

The steering is well weighted and very responsive, able to swing the front axle into the apex in concert with the suspension, chassis and body, all of which move as one cooperative collective and proceed to catapult the car out of the corner. The sharp turn-in could take some drivers by surprise, and the sensitivity requires a degree of concentration unexpected in an everyday hot hatch. But for the keen driver focused on getting a nice drive, it’s worth the trouble. 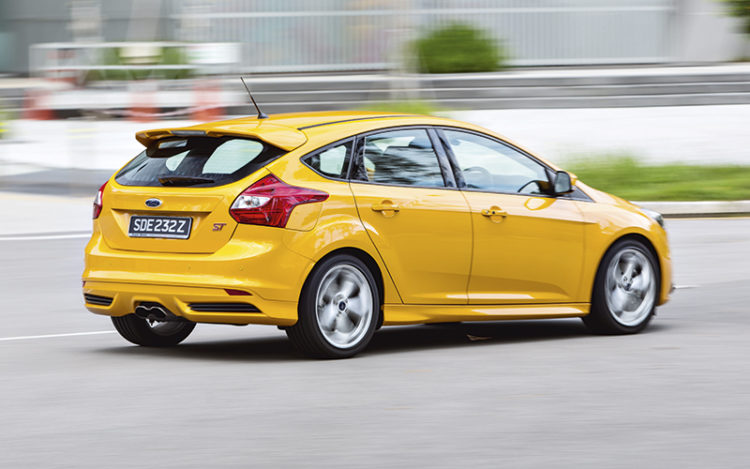 Troublesome, too, is the rather big turning circle that makes every other U-turn an unintentional three-point turn, and every multi-storey carpark a little tighter. That’s the price to pay for a pointed rack with less than two turns lock-to-lock. And the firmish ride is a tad busy in town, with road noise always noticeable, too.

Other than that, the ST is as practical and comfortable as any five-door Focus. Its amenities include a decent Sony stereo, straightforward Bluetooth connectivity, convenient keyless access, cruise control, rain-sensing wipers and dual-zone automatic air-con. 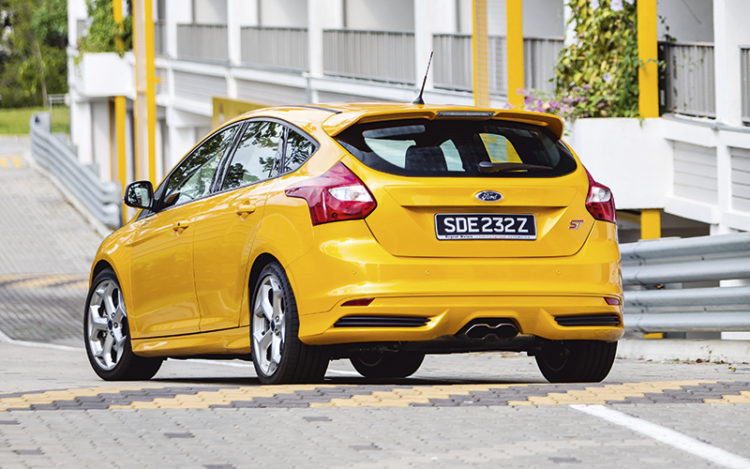 The boot space is satisfactory, while legroom in the back is more than adequate, although the rear bench doesn’t provide the same sideways support as the well-bolstered front seats and its headrests have very limited adjustment. The overall build quality is okay.