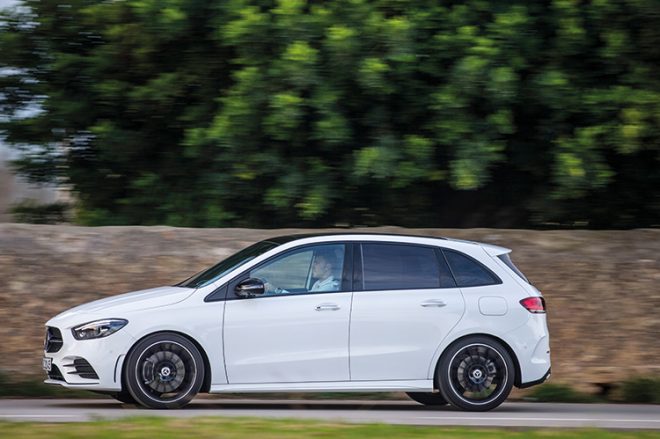 Close on the heels of the all-new A-Class which Mercedes unveiled last year is, predictably, an all-new B-Class.

The new iteration of Mercedes’ five-seater mini-MPV (or Sport Tourer, as they prefer to call it) looks like what it is, an A-Class hatch which has been hit by an enlarging ray.

Reflecting its more family-oriented focus (think of it as an A-Class with a dad bod) it also looks rounder and cuddlier than its smaller sibling.
Still, it is sleeker than its boxy predecessor, thanks to a 4mm lower roofline and a slight stretch to both body length (by 26mm) and wheelbase (by 30mm).

Mercedes says that it wanted to make the new model sportier-looking and less utilitarian than before, and to that end it has succeeded. With a class-leading drag coefficient of 0.24, the new car is also more slippery than before.

Sector-wise, its direct rivals are other five-seater MPVs like the BMW 2 Series Sport Turismo, VW Golf Sportsvan and Renault Scenic, although the Mercedes is a considerably more premium product than the latter duo (and is priced accordingly).

Given the people-carrying priorities of this sector, the cabin of the B-Class is appropriately bright and airy, thanks partly to a beltline lowered by 5mm. 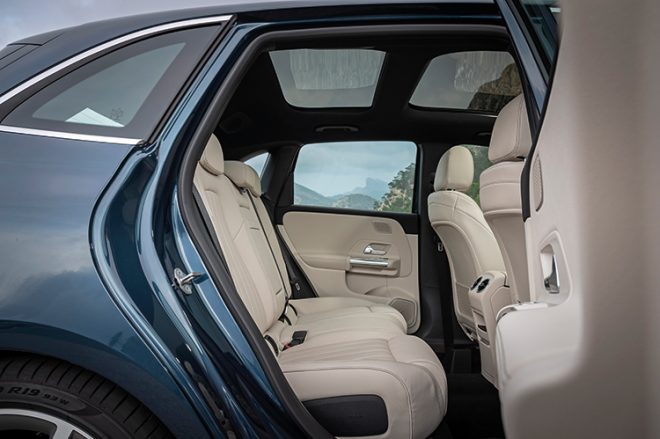 The sliding rear seats have 14cm of travel, which can increase boot capacity by up to 50 percent

Space inside is ample, with elbow room increased by up to 33mm even though the car’s body itself is only 10mm wider than before, and a touch more headroom despite that slightly lower roofline.

There is legroom to stretch at the back, the boot is capacious and well-shaped (albeit slightly smaller than before), and there are multiple storage options all around the cabin.

There will also be the option of sliding rear seats (with 14cm of travel), making it possible to increase boot space when needed, by over 50%.

The fascia design mirrors that of the new A-Class, with a freestanding tablet-like screen sitting atop the dashboard and spanning half its width, containing a configurable high-resolution instrument display (in front of the driver) and interactive infotainment and ventilation touchscreen displays (above the central air vents).

It makes for a uniquely clean-looking, minimalist dashboard.

The screen is also the visual interface for the Mercedes Benz User Experience (MBUX) which debuted on the A-Class. This is an integrated control system for entertainment, navigation, climate control and communication. 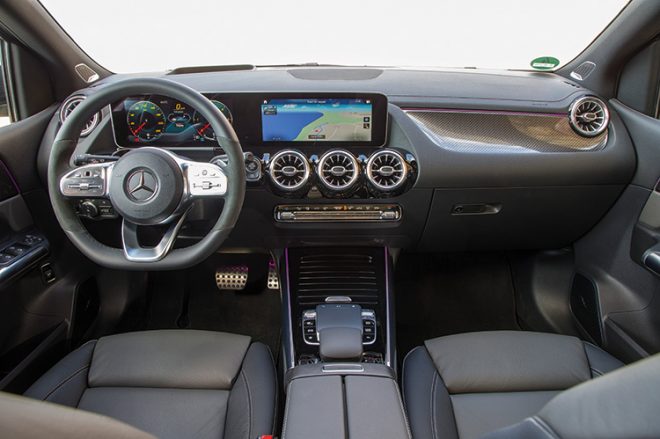 Cool cockpit is the best in its segment and can be equipped with MBUX for enhanced useability.

MBUX also boasts an “intelligent” voice command logic which responds (after you’ve first got its attention by saying “Hey, Mercedes”) to instructions given in casual conversational language rather than requiring rigid, pre-programmed commands – so it will understand “I’d like some music”, and not just “turn on the radio”.

Tell MBUX that “I’m hungry” and it will search out the nearest café for you. Despite all that, it has not yet got the grasp of Singlish, although given that it’s equipped with artificial intelligence that allows it to learn and adapt to the user’s language patterns, it’s probably only a matter of time before you can “leh” and “lah” and swear in Hokkien at the car.

The cabin looks lovely – certainly the best in its class by far – with the circular “jet engine” air vents, door handles, grab handles and some switchgear finished in matt chrome, a soft-touch dashboard, and premium-feeling materials all around.

Slightly detracting from this however are the skinny and fragile-feeling column stalks for indicator and wipers (on the left) and gear selector (on the right).

The driving position is markedly better than before, with the pedals no longer too near to the driver’s seat. The front seats are set a bit too high though, and consequently feel rather perch-like – but Mercedes say they deliberately made the driving position 90mm higher than that of the A-Class.

Mercedes are justifiably proud of the suite of safety and driver-assist features that the new B-Class comes with, most of which has been adopted from models higher up the range like the S-Class.

Using the car’s comprehensive battery of sensors, they will help you brake, change lane, evade obstacles, maintain distance in traffic, warn you of other vehicles in your blindspot, prevent the car from reversing if it detects traffic approaching from the side, dip or raise the headlights as needed depending on conditions, and many other clever things.

The Park Assist self-parking feature is particularly nifty – where most other similar systems can steer and brake for you, Mercedes’ system goes one step further by automatically toggling between forward and reverse gears as the car shuffles itself back and forth into the lot.

When the B-Class goes on sale here in the first half of this year, it will be available as the B200, powered by a 1.33-litre turbocharged 163hp four-pot married to a 7-speed dual-clutch gearbox driving the front wheels – a combination already seen on the new Mercedes A200.

The century sprint is dispatched in a swift 8.2 seconds. In other markets, a new 8-speed dual-clutch gearbox is available on the Diesel-engined versions, which will not be sold here.

On our press drive in Spain the B200’s petrol engine served up its power in a nicely linear fashion, and its ample low and mid-range torque allowed swift progress in town traffic. 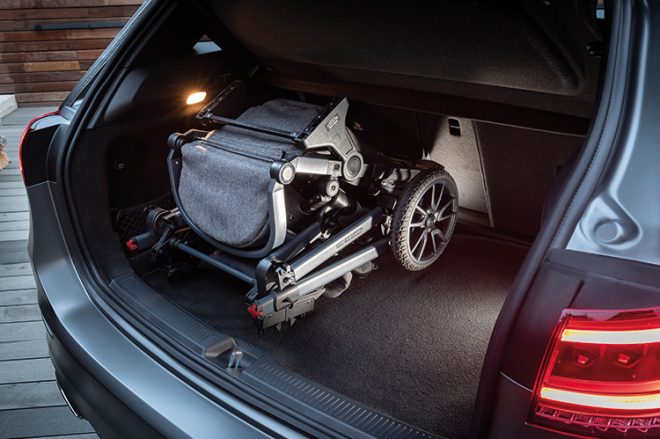 B-Class boot volume can be expanded from 455 litres to 1540 litres with the rear seats folded.

However it started to sound coarse once past about 4000rpm, discouraging hard driving. Take things easy, and the din subsides. Road and wind noise is well-subdued and the cabin is a relaxing cocoon to inhabit.

Mercedes says that its ride/handling target was to make the new model “at least as agile as its predecessor while even more comfortable”.

It has certainly met the latter objective – the ride is incredibly supple over even the worst roads, even with the (optional) adaptive damping in its firmer mode (Sport) – on this front it is a vast improvement over the old B-Class, which was unsettled by the slightest of bumps.

In fact it is so cushy in Sport that Comfort mode (which also introduces some float and heave over undulations) is redundant.

However on the dynamic front, perhaps Mercedes set its sights too low by merely aiming to match the predecessor’s handling, given that the previous B-Class was hardly a driver’s delight. 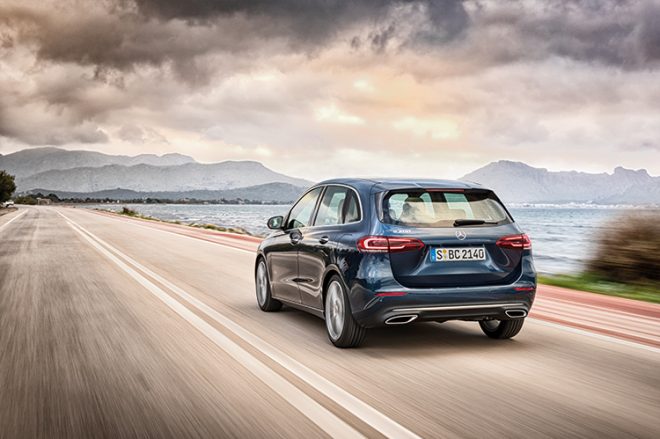 Latest B-Class rides better than before, but is dynamically no better than the older model.

Consequently the new model isn’t one either. Initial steering response is slow, with even slight direction changes necessitating a concerted swivel of the wheel, and the car generally feels nose-heavy, lurching onto its outside front wheel under committed cornering and being prone to understeer.

The B-Class is most at home being driven at five-tenths pace, where it amply fulfils its remit as a spacious, well-appointed, extremely comfortable and relaxing mode of transport.

And ultimately it is these established Mercedes traits that will drive sales of the new B-Class.

It may not sparkle dynamically, but buyers wanting a premium-branded mini-MPV will be delighted with its space and usability, its class-leading tech and safety features and its superb ride.

Being inside it just feels special, and for many, that will be all that matters.