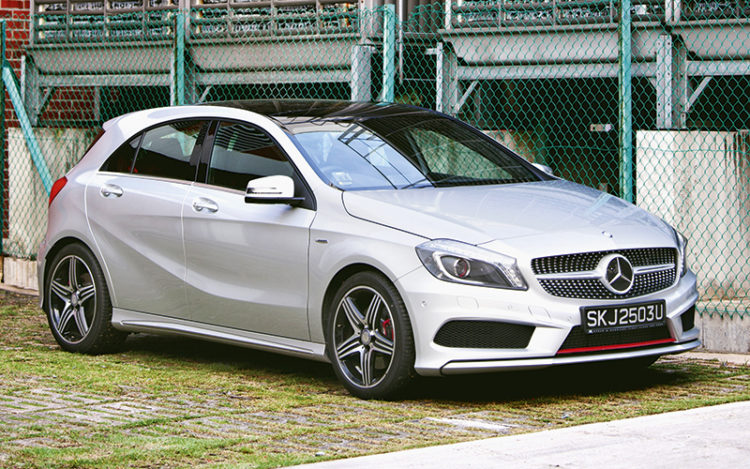 I’m not a fan of Mercedes’ recent front-drive offerings, the A-Class and B-Class. They look good (especially the squat, pocket-sized A-Class) and steer sharply, but the examples I’ve driven have been hampered by a crashy ride and a hesitant, indecisive 7-speed dual-clutch gearbox.

So I settle into the driver’s seat of the A250 Sport with all the enthusiasm of an NS boy booking into camp on a Sunday night. (Well, at least the cabin is more inviting than the average SAF facility.) 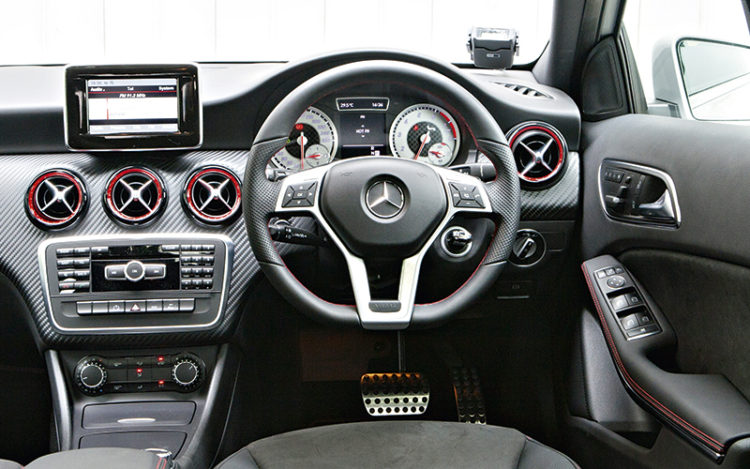 The dashboard is cleanly styled, subtly curved and punctuated with SLS-style “eyeball” air outlets, the steering wheel is a handily sized three-spoke affair with a nice dimpled surface just where you grip it, and the white-faced instruments are a funky touch. On this Sport-trimmed version, the fascia is clad in mock carbon fibre instead of the usual textured plastic, while the air vents have red trim around their circumference, giving cabin ambience a further lift. Even the seat belts are in red.

Everything is elegantly integrated except the central infotainment screen which is, unfathomably, tacked to the dash face. Like a clown nose on Keira Knightley’s mug, it’s disfiguring. The sports seats in the A250 are fantastic, though. Good-looking, supportive and snug, you could spend many painless hours in them. Painless, that is, apart from the ache in your ankles that manifests after about 10 minutes of driving. The seat/steering/pedals relationship is poorly conceived for someone with moderately long legs – you’ll need to drive with legs slightly splayed and your right foot at an unnatural angle. 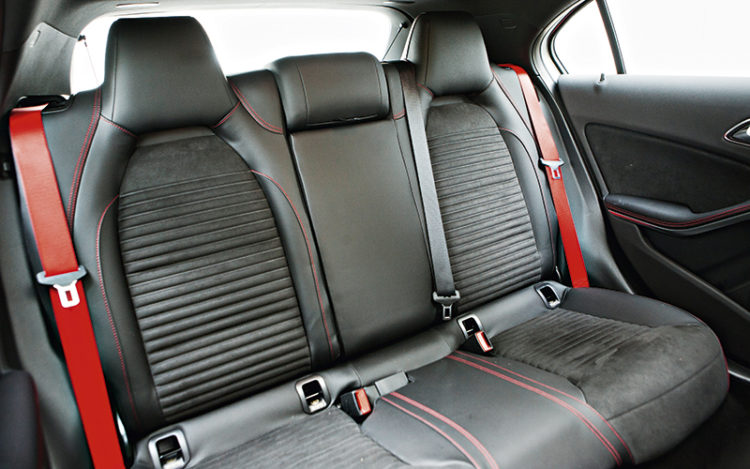 Despite its compact looks and coupe-like roofline, the A-Class is up there with its class rivals space-wise, with enough legroom to allow a six-footer to sit behind another without discomfort, and enough headroom to clear his hairdo. There are also plenty of door bins and consoles all around to swallow all manner of knick-knacks. The absence of rear air-con vents is a surprise, however.

With its 2-litre turbo engine delivering 211bhp and 350Nm of torque, the A250 is the hot hatch of the A-Class range, going head-to-head with the likes of the VW Golf GTI. The on-paper numbers back this up, with a 0-100km/h time of 6.6 seconds and a top speed of 240km/h – significantly quicker than the A200’s 8.3sec and 224km/h figures. The hard performance is certainly there, but its delivery is anodyne. The engine is punchy and linear, but it sounds disappointingly pedestrian, lacking the sparkle of the Golf GTI’s unit or the zing of BMW’s turbocharged 4-pots – as the A250 motor homes in on its 6200rpm redline, it merely gets louder without sounding any sportier. 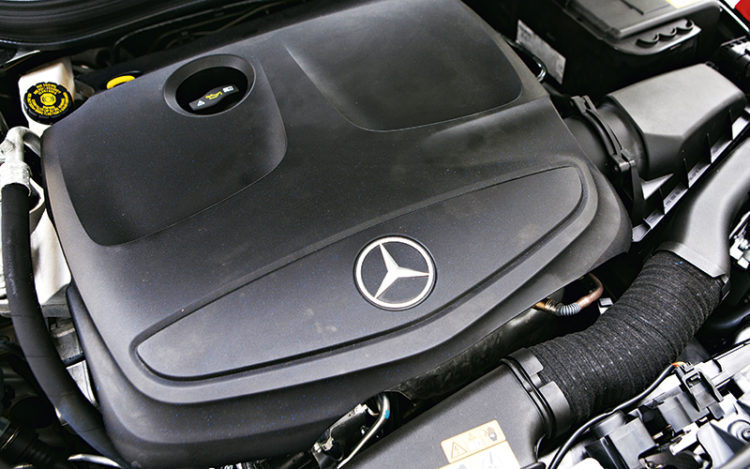 A250’s 2-litre engine has impressive output-and-performance figures, but its soundtrack is nothing special.

Given the imperfect examples of the 7-speed dual-clutch that I’ve sampled in the A200 and B200 in recent months, I didn’t expect great things of the similar transmission in this car. But in the A250, the 7-speeder delivers more respectably than in the other cars, no longer exhibiting exasperating lethargy when moving off, and responding to the steering-mounted paddle shifters with more immediacy.

However, it still seems to slip the clutch excessively on downchanges, and in its default Economy mode, isn’t very keen to kick down. Switching the gearbox to its Sport mode isn’t really a solution to this problem, because then it hangs onto low gears for much too long, making for raucous progress around town. Ultimately, it’s not quite up there with the best twin-clutch ’boxes yet, but it’s no longer a constant irritant. The A250 Sport spec includes these high-sheen 18-inch wheels and perforated brake discs.

What remains irritating, however, is the ride. It’s painfully jarring over broken urban tarmac, and every speed hump is a wince-inducing prospect, as if the dampers have seized solid. Given how well their bigger models ride, it’s hard to imagine that the same Mercedes chassis engineers had a hand in the suspension setup of the A-class. The car’s lowered “Sports Suspension” (standard on Urban and Sport versions of the A-Class) and 18-inch wheels may well have had something to do with it, but even so, it’s unfeasibly harsh for the daily commute.

The beneficiary of that stiff suspension is, of course, handling. And in this regard, the A-Class impresses, flicking into bends with little inertia and no discernible body roll. Its steering isn’t particularly involving but it is quick and very sharp, and the car consequently feels very chuckable. The handling balance isn’t really throttle-adjustable, but there’s big grip from the chunky, low-profile 235/40 R18 tyres. In essence, it’s a very effective handler, rather than an inspiring one. 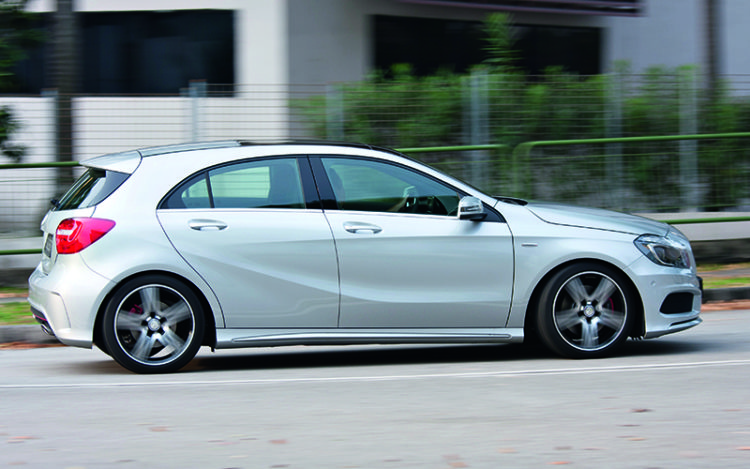 So it’s quite an odd fish, the A250 Sport. It’s shapely, sporty and looks downright delicious, and will be bought by many on this basis alone. This range-topper comes as standard with mean-looking five-spoke 18-inch rims, front and side skirts, and a lovely “diamond” radiator grille, making it even more handsome. It’s also got the speed and handling to match its looks. And just the idea of a hot-hatch Merc is a delectable one.

But the buyer of such a vehicle expects to use it as an everyday tool, and on this front the A250 is badly tripped up by its ride. It’s also not as entertaining or complete a package as the class benchmark, the (Mk 6) Golf GTI. I remain decidedly unsmitten.