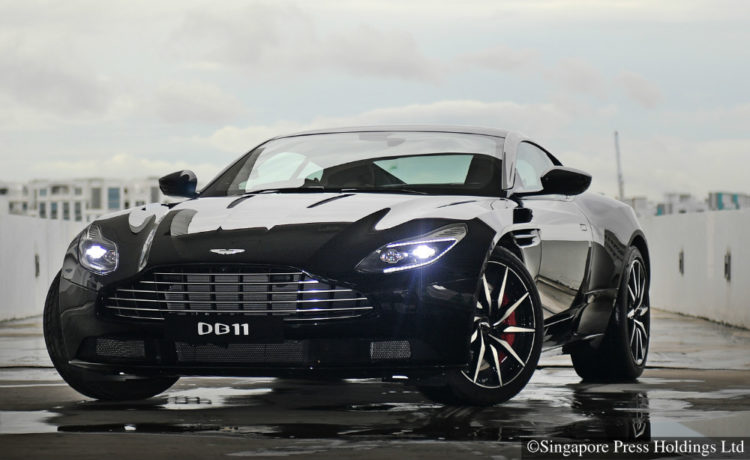 Among sports car marques, Aston Martin has always been the low-key one, the discerning rather than the showy choice.

But the same cannot be said of the new DB11.

I have been reviewing cars for more than 20 years and I have not driven a vehicle that has attracted so many stares.

Even as I snarled away from the Wearnes showroom in Leng Kee Road, an over-enthusiastic fan chased me on foot, no doubt trying to get that precious shot for his car-spotting blog.

Almost everywhere I went, heads turned and pedestrians stopped in their tracks. People on overhead bridges paused to gawk as I passed below. And a petrolhead friend messaged to say he had just seen a DB11 drive by, not realising I was the one at the wheel.

Then again, this car has been keenly anticipated for ages, given that it has been more than 12 years since its predecessor, the DB9, broke cover. It has been a long time coming, but the wait has been worth it.

For a start, the DB11 is strikingly beautiful, not something that can be said of most modern-day sportscars, which tend to favour visual aggression over elegance.

The wheelbase has been stretched by 65mm over the DB9’s and, viewed from above, the car’s body is pinched about its middle and then flares dramatically outwards again at its rear haunches.

The trademark Aston side strake behind the front wheels now conceals an opening to vent air from inside the front wheel arches to reduce front-end lift at high speed.

At the rear, air is channelled through intakes at the base of the C-pillar and out again over the downward-sloping rear boot lid, to reduce rear-end lift without the need for a spoiler.

Launch Edition units, like this test car, boast extra visual goodies such as V12 side badges, special directional 20-inch rims and roof strakes in either silver or black, instead of the usual body-coloured ones. 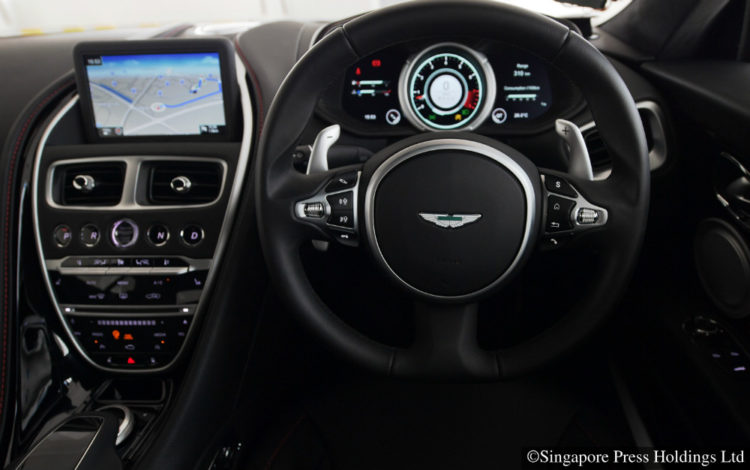 The DB11 is equally lovely inside, with supple, hand-stitched leather cladding much of the cabin and glossy inlays of wood or carbon trim on the doors and centre console.

The instrument cluster is a 12-inch thin-film transistor display, with another 8-inch screen dominating the centre stack.

On top of this, the Launch Edition cars add a 1000-watt Bang & Olufsen sound system (instead of the standard 400-watt system), piano black trim inlay and touchpad control.

Legroom and headroom for the rear plus-two seats have grown significantly. Young children can now stretch out at the back and they will be more secure too, with Isofix childseat-anchoring points provided.

But sports cars are about performance and dynamics, not child seats.

Under the DB11’s exquisitely sculpted one-piece clamshell bonnet sits an all-new 5.2-litre twin-turbo V12 engine with 600bhp and 700Nm of torque (smaller but punchier than the long-serving naturally aspirated 5.9-litre V12 in the DB9), enough to hurl this 1.8-tonne coupe to 100kmh in 3.9 seconds and on to a top speed of 322km/h.

Despite being turbocharged, the engine doles out power in a linear fashion, ever-increasing in ferocity as the rev needle homes in on the 6500rpm limiter. Power is transmitted to the rear wheels through a ZF eight-speed autobox. It is slick enough, although a bit slow to respond to downchange requests from the paddle-shifters.

You can revel in the magnificent noise that the engine makes. From a start-up bark, it mutates through a stirring mid-range snarl, before reaching an urgent, howling crescendo at the redline.

The DB11 has the handling to match the engine’s potency. With a near-ideal 51/49 front-rear weight balance, it is keen to tack into bends, the adaptive dampers and anti-roll bars quelling almost all stray body movement and the fat, bespoke Bridgestone S007 tyres grip ferociously. Despite its weight, it feels lithe, agile and sturdy.

For such an able-handling car, the ride is beautifully composed, even with the adaptive damping in Sport+ mode – befitting the DB11’s remit as a sporting tourer instead of an out-and-out racer.

The DB11 is one of the loveliest cars on the road and it drives every bit as well as it looks.