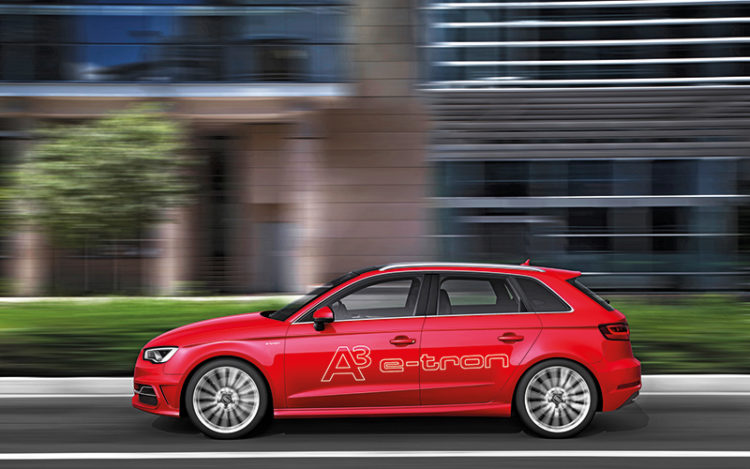 From the outside, it’s hard for even the keenest Audi aficionado to differentiate the A3 Sportback e-tron, the automaker’s first plug-in hybrid car, from conventionally powered vehicles in the A3 range.

However, there are subtle cues, in the form of “e-tron” (the German automaker’s sub-brand for its advanced hybrids and electric vehicles) badges, and polished chrome slats for the front grille, as opposed to the semi-matte grille slats found on “regular” A3 models. At the rear, the tailpipes are hidden under the bumper, a nod to the car’s partially electric nature.

But it’s underneath the skin of this vehicle that most of the work has been done. To accommodate the hybrid powertrain, the 4-cylinder engine has been shifted 6cm to the left in the A3 Sportback shell, the battery pack is now nestled beneath the rear seats and the fuel tank has been relocated further rearwards. 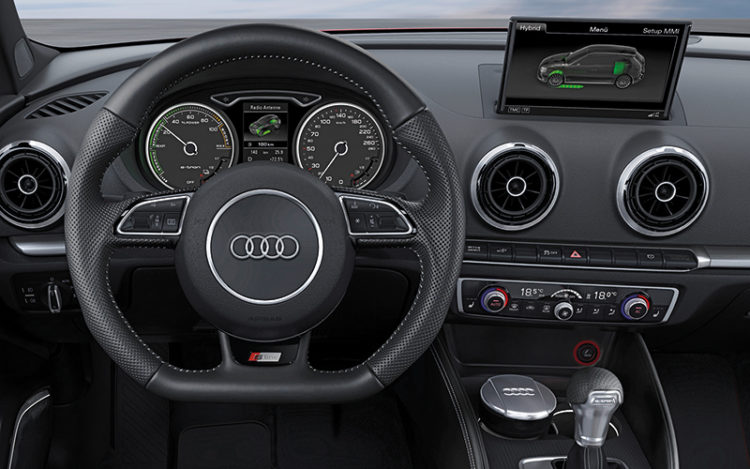 The hybrid drivetrain in question is a 1.4-litre turbocharged engine twinned to an electric motor that develops a combined total of 204bhp and 350Nm. These are power figures that aren’t entirely surprising these days, but more than that is the A3 e-tron’s ability to return an incredible 66.7km/L (giving it a theoretical range of 940km) and emit just 35g/km.

The secret to those eye-popping economy figures is how it can drive on electric power alone, for 50km at speeds of up to 130km/h. Charging the A3 e-tron’s lithium-ion batteries (through a port located behind the Audi badge on the car’s nose) takes a little over two hours on a high-voltage industrial socket and just shy of four hours on a domestic wall socket.

The A3 e-tron’s “dual-faceted” nature is all rather subtle on the surface, but step inside the car and that impression soon changes. In the instrument cluster pod that usually houses a tachometer, it has a power meter. This gauge essentially shows the same information as the tachometer – though here it’s expressed as a percentage instead of revolutions per minute. 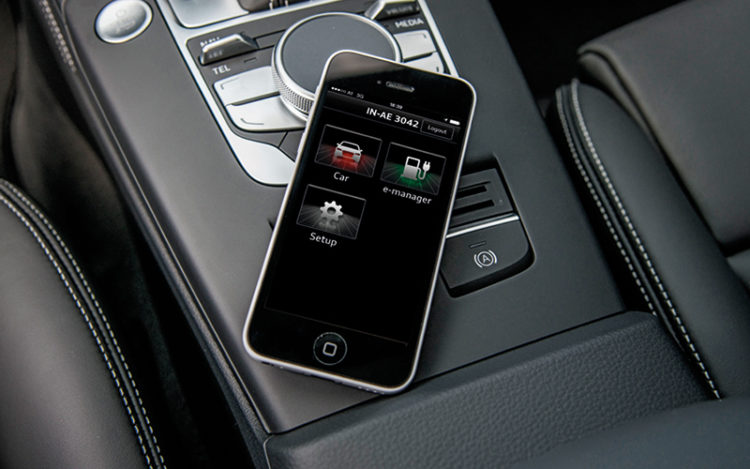 The most important button is the one marked “EV” on the centre console. If there’s enough charge left in the batteries, you can drive the car like you would any electric vehicle, without the aid of the combustion engine (but if you floor the throttle pedal, the engine will start up).

Then there are the other driving modes – hybrid auto, hybrid hold and hybrid charge. The first uses what the car thinks is the ideal mix of battery- and petrol-powered locomotion for maximum efficiency/power; the second mode runs the engine more often to conserve the battery’s charge (Audi says this is useful when transitioning from highway to city driving); and the third sees the engine working “overtime” as a generator to recharge the drained batteries. This is in addition to Audi’s usual Drive Select modes that govern such things as steering and throttle responsiveness, along with the gearbox’s aggressiveness. 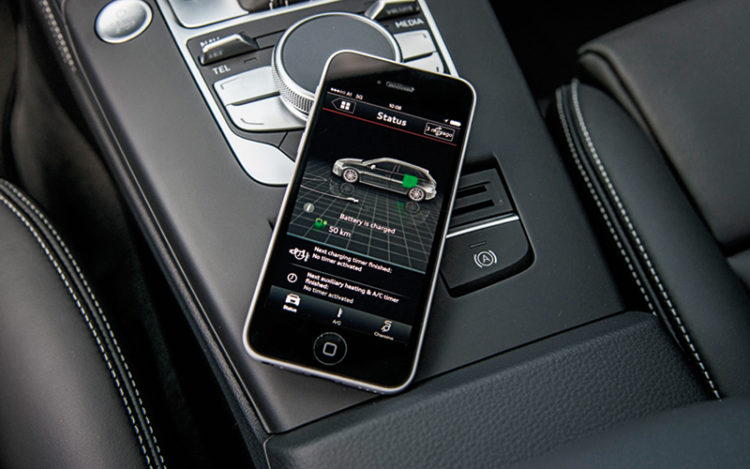 There is a smartphone app that lets you monitor the car remotely.

For our test, Audi plotted an 83km route that would enable us to try out the A3 e-tron’s various driving modes. I set off from downtown Vienna in pure electric mode (which the car slips into by default), and there is simply no better way to drive in the city – the car is superbly refined and highly responsive, thanks to the near-silent running and instantaneous torque afforded by the electric motor.

On clearing the city limits and onto faster, more open roads, hybrid auto mode was selected. In addition to the petrol engine’s turbocharged boost, hard acceleration also results in more “boost” from the electric motor.

On my return to Vienna, I noticed I had just 8km of electric-only range left, so I opted to use the hybrid charge mode to “juice up” the cells, so I could complete the final leg of my test-drive on “electron” power alone.

Despite not even trying to drive in an eco-friendly fashion (including several stints where I put the pedal to the metal), I averaged 27km/L, with the multi-function display showing that some three-quarters of my journey was powered by the electric motor. 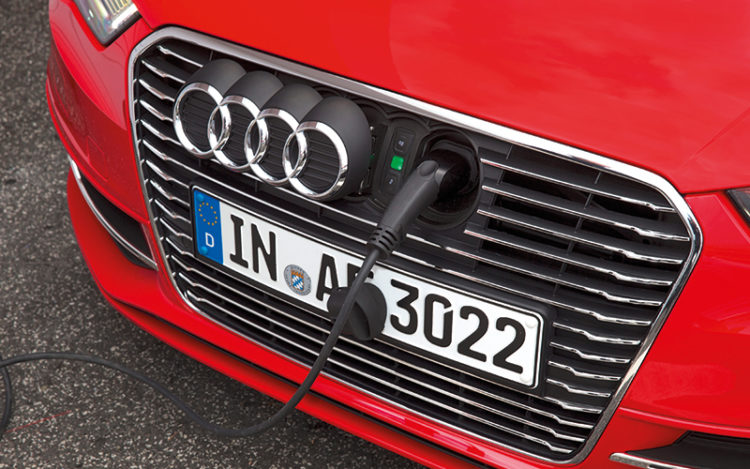 Even more impressive is how, in spite of hauling around an additional 169kg over a comparable A3 hatchback (no thanks to the electric motor, batteries and hybrid electronics), the A3 e-tron delivers an exceptionally well-damped ride, with its body movements resolutely controlled. It’s not particularly agile (on the other hand, it is pretty spry in the century sprint stakes, with a time of 7.6 seconds), but it’s also far from being a lumbering beast.

Yes, living with this car might entail a little more hassle than with a regular one. You have to adhere to a charging routine (to eke out the maximum amount of economy) and you’ll have to live with a smaller boot, as it has 100 litres less luggage space than the regular A3 hatchback’s 380-litre trunk.

That aside, the A3 e-tron is a far more appealing prospect than a pure EV with “range anxiety” (to say nothing of a dearth of public charging stations here), and against “lesser” hybrid cars, it’s a good deal more frugal. Where overall performance, efficiency and convenience are concerned, it’s really like having your cake and eating it. 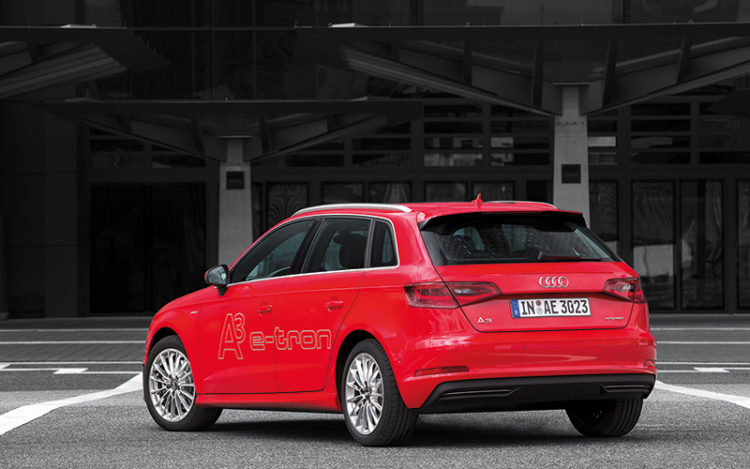 One of the easiest ways to identify an A3 e-tron is its lack of visible tailpipes.