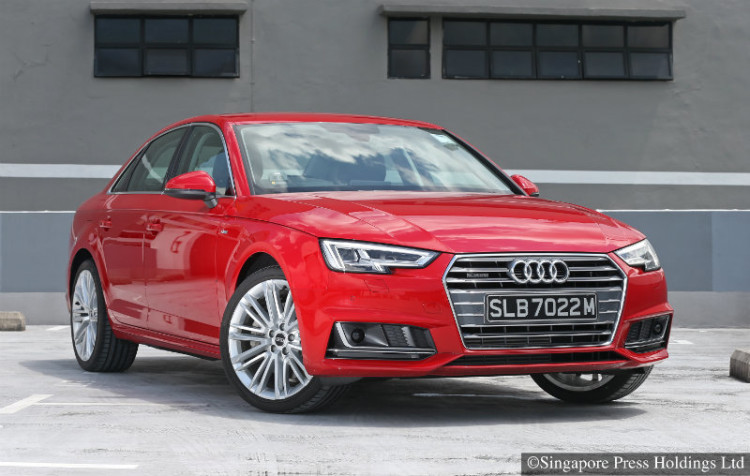 During an Audi driving event last month, most people assumed that the new and rarefied R8 supercar would steal the show.

But actually, the A4 2.0 lined up for the slalom course offered the most fun.

The twin row of cones lined up on the seafront tarmac in Changi demonstrated the dexterity of the all-wheel-drive A4 2.0 brilliantly. Although a big car for its segment, the A4 was not in the least unwieldy.

In fact, even if it was carrying too much speed, it stuck stubbornly to the course, albeit with a tad of judder as rubber and tarmac tried to divorce. The car’s electronic differential, however, prevented the split.

The car’s steering was flawless – quick, tight and sharp. And its brakes bit with the ferocity of a pitbull in combat.

So, when it was my turn to take the car out on a road-test, I knew I was in for more fun. And I was not disappointed.

The test-car is decked out in S-Line trim, with extra bits of chrome and body kit to make it stand out. (The retail car, in Design trim, looks handsome too.)

Inside, it is adorned with a host of high-tech features which are superfluous but interesting. These include head-up display, adaptive cruise control with active lane assistant and high-beam assistant.

The car will also advise you – gently with a shoe-shaped icon on the head-up display – to lift your foot off the throttle if, say, you are approaching an intersection too fast.

But the most intriguing feature is Traffic Jam Assist, which drives the car autonomously in slow traffic. It takes the chore out of crawling in a congested road, as steering, throttle and brakes are taken care of by an onboard computer and a slew of sensors. The only thing it does not do (yet) is to flash/horn when a car cuts abruptly into its path without signalling.

With the exception of head-up display, all these gadgets are not standard fare in the A4 2.0, though.

But it is still a very well-equipped carriage. LED headlamps, Audi Connect with Google map, ApplePlay, Wi-Fi for up to eight devices, electric parking brakes with auto-hold and self-release, and keyless system with sensor on each door – all these make the A4 2.0 stand out among its peers.

The cabin is tastefully done up and spacious. Longer and wider than the Mercedes-Benz C-class, the A4 also offers plenty of stowage. We carried a 40-inch TV in the boot – without flipping down the seats.

On the go, the A4 enchants with its effortless progress, cushy ride and superb insulation. These are traits you do not notice on the slalom course, but are quite evident on public roads.

So, even if all high-tech drive assist systems were standard issue, you would probably not use any of them.

The car has more power to get you out of trouble than the A4 1.4, which is no laggard itself. So, you feel more confident with it and you enter a corner without shifting down, knowing that the car has enough grunt to exit cleanly.

Likewise, overtaking and lane- merging are executed with no qualms.

But you are also aware that it is a sizeable car. You do not feel it in a slalom circuit because you are all charged up.

On a twisty road with backseats occupied, or in older carparks with narrow ramps, you feel its stature. On an open road, the A4 shines by offering the comfort and luxury of cars above its station.

And with its new 2-litre engine, it has substance to back up its form.