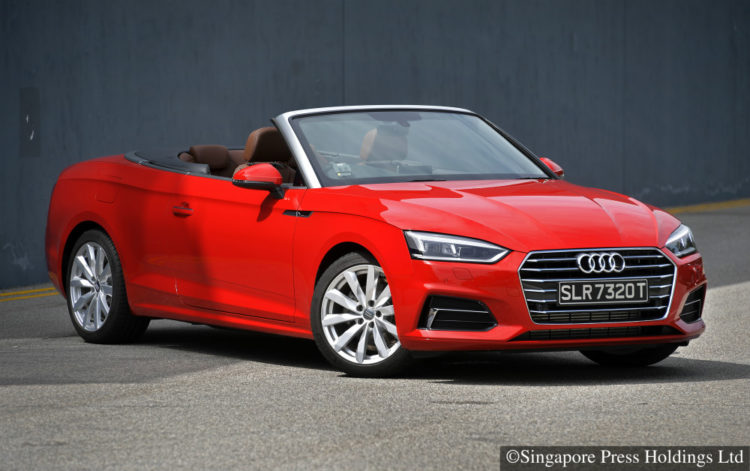 Cabriolets can be both easy and difficult to evaluate at the same time.

Reviews of cabriolets can be summed up like this: They are drop-top variants of existing sedans or coupes. They cost more and the extra money buys the joy of alfresco motoring, which is largely an acquired taste in urbanised Singapore, with its year-long humid and wet weather.

The A5 Cabriolet follows the same script. It is based on the second-generation A5 Sportback launched in January and the A5 Coupe unveiled here in July.

The cabrio has all the strengths of its siblings – a new punchy and fuel-efficient engine and the motoring equivalent of supermodel looks.

These attributes were already noted in earlier reviews by The Straits Times, which meant that I have to find new things to say about the cabrio, hence the difficulty in reviewing it.

That said, these are the main things you need to know about the Audi cabrio.

While the extra money does not translate to more oomph in performance, it buys loads of style.

The rag-top makes the already gorgeous A5 even more stunning. The top opens in 15 seconds and closes in 18 seconds and it can operate at speeds of up to 50km/h. 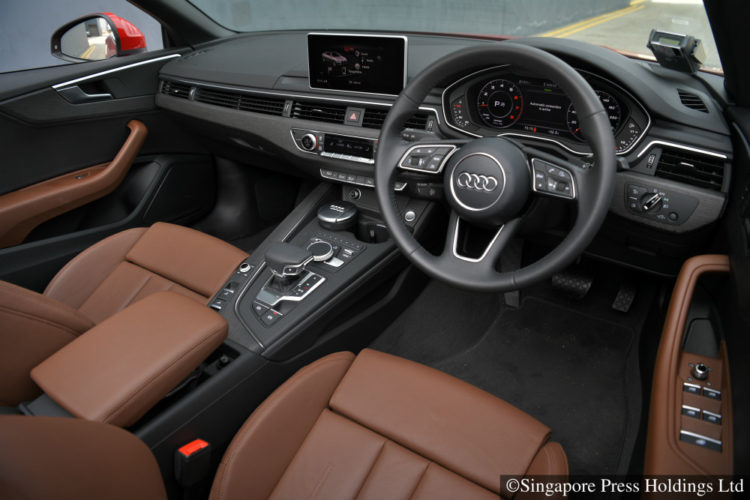 At a traffic light during my test-drive, the right-turn green arrow came on when I was about halfway through opening the roof. I was able to move off slowly and complete the opening without holding up traffic.

The car has a touch of practicality too. Its 380-litre boot, while smaller than the Sportback’s 465-litre stowage, can be expanded by folding the rear seats down. This way, it will accommodate two full-size golf bags easily.

The rear seats are snug. Yet, my wife and 19-year-old son were able to ride in them for about half an hour without complaining. Their feet did not turn numb from poor blood circulation.

This means that while the A5 Cabriolet is not a family car, it can be called upon for some family duties when necessary.

The layout of the dashboard is exactly the same as the Sportback and Coupe’s – modern and classy, with a 12.3-inch display and a digital cockpit as centrepieces.

The most impressive aspect of the car is its fuel economy. The car is powered by a new family of engines that runs at high compression ratios with variable air intake valves.

Over a four-day, 494km test-drive, the car turned in between 11.1km per litre and 12.5km per litre. It does not match the claimed 16.9km per litre (no test car ever does), but it was still credible considering that I did not drive in the most fuel-efficient manner most of the time.

Overall, the A5 Cabriolet is a niche car. Many will swoon over its looks, but few will actually buy it, passing it over for its more practical Sportback sibling in the A5 stable.

The car does not have many rivals. The BMW 420i Convertible costs about $12,000 more, but has a retractable hard top. The Mercedes-Benz C200 Cabriolet is about $4000 cheaper, but the Audi looks more alluring.

Those shopping for a premium Continental convertible will do well to consider the Audi.