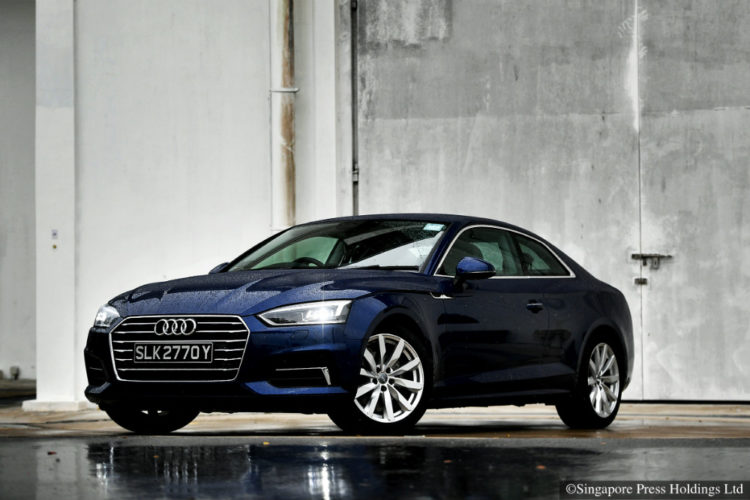 New cars are usually touted to have this and that, and to be able to do this, that and more. But often, they fail to deliver.

Audi’s new A5 Coupe is one pleasant exception. The car is powered by a turbocharged 2-litre 4-cylinder engine that delivers exceptional performance and economy.

It churns out 190bhp and 320Nm of torque from 1450rpm, making it as punchy as turbo-diesels of a comparable size.

On the go, the A5 Coupe – the first of the A5 range built on a new modular platform – certainly feels energetic. The nice thing is that its performance is delivered in a smooth and linear fashion, allowing pace and comfort to co-exist beautifully.

Equipped with a 7-speed dual-clutch transmission programmed for efficiency, the A5 Coupe clocks a brisk but not blistering 7.3-second century sprint. But because of its generous spread of torque, you are rarely left wanting in any situation.

Despite its prowess, the car matches the fuel economy of the 1-litre A3 Sedan, a far smaller sibling. Over a three-day test-drive, it averaged 12.5km per litre – very commendable for such a sizeable and sporty car, even if the figure is far from Audi’s claimed 18.2km per litre.

For a comparison, the slightly smaller Volkswagen Golf GTD Variant, powered by a 2-litre turbo-diesel, has a stated consumption of 20.8km per litre and does 0-100km/h in 7.9 seconds.

The secret to the A5’s seemingly improbable combination lies in its so-called B-cycle engine. Named after Audi engineer Ralf Budack, who developed the technology, the engine makes use of a new design that facilitates high compression ratios (close to 12). It is complemented by a valve system that varies air intake according to load (or urgency).

The A5 is the first Audi here to have the B-cycle engine and the test-car’s performance is proof of the pudding.

The car is also fitted with a coasting function that is now also available when cruise control is turned on. In Efficiency drive mode, the car will coast without applying the throttle when situations allow it.

Clearly, a coupe cannot be merely efficient. It has to be beautiful, well furnished and an improvement over the last one. The new A5 Coupe is all that.

It has a well-proportioned body with a wide, planted stance. New creases and bulges accentuate its sportiness, with the most dramatic being a character line that forms up from its clamshell bonnet and runs the entire length of its side.

It has the latest infotainment system and its cabin is 17mm longer, with 26mm more front shoulder room and 12mm more headroom. Although larger than its predecessor, it is up to 60kg lighter.

Automatic seat belt extenders and a one-touch button to return a seat back to its set position add convenience. The passenger seat can also be adjusted via controls on the driver’s side.

The front-wheel-drive variant here may not be a sizzler, but it is still a fairly entertaining and engaging car to behold. It is a relaxed and comfortable grand tourer, with uncommon efficiency to boot.

You can also amplify its engine note through the speakers. But the way the car is configured, it is best enjoyed with a quiet and well-insulated cabin, which the A5 has.