The Audi e-tron is the marque's first pure-electric vehicle with 356hp
Loading posts...
0 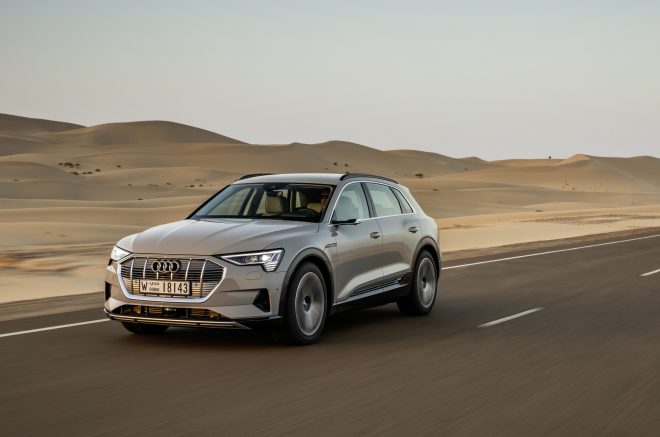 Two new SUVs will join the Audi model lineup in 2019. The first one is the second-generation Q3.

But what will arrive in the third quarter of 2019 will be far more exciting. Audi calls it the “e-tron”, and it is the German carmaker’s first-ever pure
electric vehicle.

The e-tron is not a petrol-electric hybrid or a plug-in hybrid, but a battery powered, electric motor-driven, five-seater SUV (sports utility vehicle).

The e-tron’s size is between that of a Q5 and a Q7. The e-tron’s styling, both inside and out, resembles that of Audi’s other Q models. However, the e-tron does have some bespoke exterior features, such as the semi-blanked grille, pronounced fender bulges and wide rocker panel profiles along its flanks. It is not as sleek as the recently launched Q8, but it is definitely a handsome SUV. Two electric motors power the Audi e-tron. Each one is located transversely between the left and right wheels, with the motor shaft concentric with the output drive shafts.

A compact planetary transmission on one side of the motor provides both speed reduction and differential functions. Electric motors do not need a gearbox of any sort because their torque output is constant throughout the speed range.

However, because motors typically spin between 10,000rpm and 15,000rpm, a one-step reduction is necessary to achieve conventional wheel and road speeds.

The complete modular assembly is so compact that you would not believe that the power unit in front produces 168hp and the one in the rear produces 188hp, for a total of 356hp. 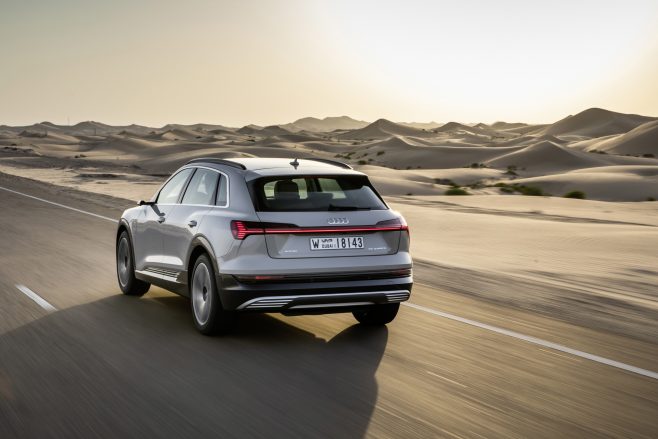 Torque-wise, the front motor develops 247Nm and there is another 314Nm available from the rear motor. Altogether, the Audi e-tron has 561Nm of torque that’s instantly available.

That’s quite a feat when you consider that the Audi e-tron weighs 2.5 tonnes, a figure which makes even the 2250kg Bentley Continental GT seem relatively light. The e-tron’s battery set comprises of lithium-ion cell modules that sit below the passenger compartment.

Contributing to roughly 25 per cent of the SUV’s total weight, this 95kWh battery also plays an important role in terms of weight balance, and helps keep the Audi e-tron’s centre-of-mass low. 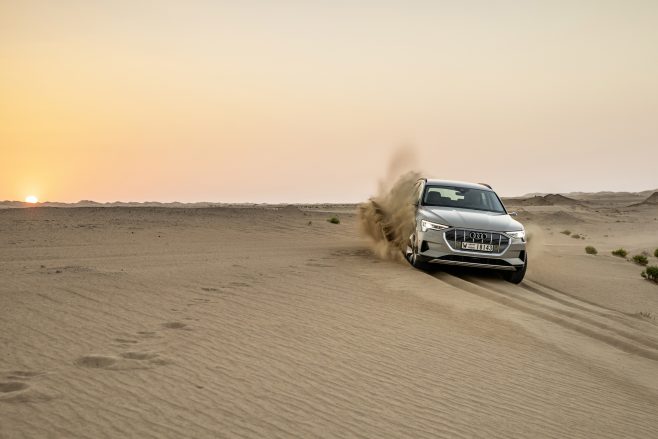 The e-tron is the first production Audi with an electric quattro (all-wheel-drive) drivetrain, too. The rear motor is the primary power unit. A power control system constantly monitors power and traction demands, and decides when to activate the front motor.

All-wheel-drive is therefore available whenever necessary. Meanwhile, torque distribution from left to right is managed by selective braking instead of complex differential control. The car has adaptive air suspension as standard

Driving up Abu Dhabi’s Jebel Hafeet Mountain Road proved that the Audi e-tron’s systems all work remarkably well. Through sweeping turns and tight hairpins, the e-tron kept all four tyres firmly planted and exhibited no signs of losing grip at either end.

Despite having to move 2.5 tonnes, the motors’ instant torque was comfortably up to the task, and accelerated the e-tron eagerly out of every corner. 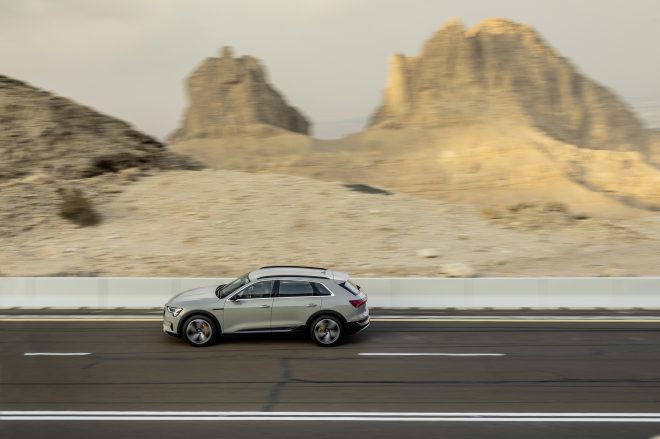 Apart from driving up the aforementioned mountain road, I also did a few highway runs at 160kmh and drove across desert strips comprised of gravel and soft sand. Although I only started with an 80 per cent full battery, I was still able to cover about 265km during this drive without emptying it.

Audi claims that the e-tron’s unique energy recuperation technology gives it a maximum range of 400km when fully charged.

The e-tron will serve most Singapore drivers comfortably. On average, it should only require a recharge once every two days.

Anyone interested in electric cars and has about $400,000 to spend should rush down to the Audi showroom when it arrives. Seriously.