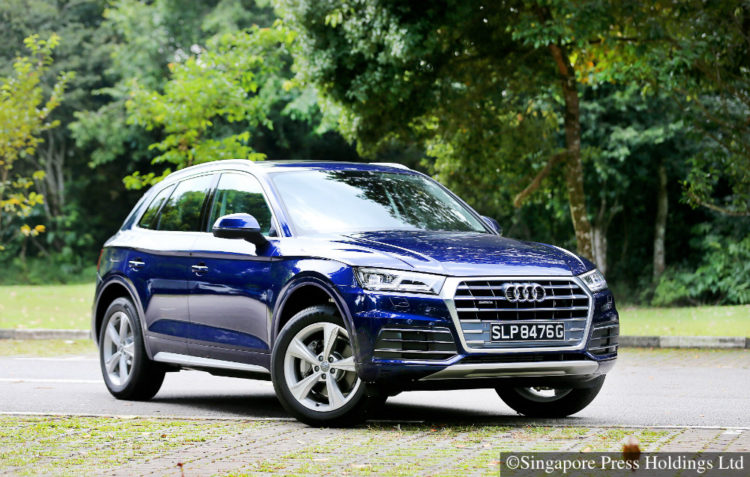 There are cars that have grown, but you are not quite sure where the extra millimetres have gone to.

This is evident as you approach the car, and even more so when you step inside. Legroom in the second row is noticeably more generous. Flip open its motorised tailgate and you will see a larger luggage area.

At the wheel, however, the Q5 does not feel like it has been upsized. For a car with such a long wheelbase (in relation to its overall length), it is incredibly nimble.

Making three-point turns in tight spaces is easier in the Q5 than, say, in the new Toyota Harrier – a longer vehicle with a shorter wheelbase.

The Audi is also a mite more reassuring around fast bends and has a wee bit neater turn-in. The car’s all-wheel-drive drivetrain might have contributed to its composure.

Unlike previously, this system completely disengages the rear axle under most driving conditions and re-engages it in an instant when it is needed.

But if you are the 0.1 percent of drivers who buy an all-wheel-drive SUV because you want to go off-road, the Q5 – like 99.9 per cent of all new SUVs – is unlikely to take you very far away from the tarmac.

Perhaps the driver before me had taken the test unit off the beaten path. An intermittent clunking noise emanates from somewhere near its front axle when I am taking off and its brake pedal makes a “thung” sound in its spring action.

Other than these minor issues, the Q5 is pretty peachy. Lighter than its predecessor and endowed with a more powerful engine, it leaves most cars behind at the lights. Zero to a hundred is accomplished in 6.3 seconds, making it even quicker than the Volkswagen Golf GTI.

The Q5’s prowess, however, is not as easily accessible as the Harrier’s. There is a small but noticeable void in the first few degrees of its throttle. This makes it less linear and predictable to drive than the Toyota.

But when its turbo spools up, the Q5 blasts off like a rocket ship. Without a long and clear stretch ahead, it is a tad scary when it does this.

Design-wise, the car is slightly sleeker, with tweaks made to its C-pillar, rear roof line and character lines. Its side profile has a hint of coupe.

Inside, the cabin displays more plastic than the Harrier’s, but its infotainment system has as always, one of the most intuitive formats of its kind.

Seats are upholstered in rugged Milano leather. And you can choose different colours for your ambient lighting. Audi’s “virtual cockpit” presents all instrumentation readings, as well as navigation information, right in the driver’s line of sight. And its luggage area is more versatile than the Toyota’s.

The car’s suspension has damper control, allowing you to pick a variety of ride characteristics.

Clearly, the Q5 has more engineering, is more powerful and offers more space than many of its peers. If these three features rank high on your list, it may well be the SUV for you.