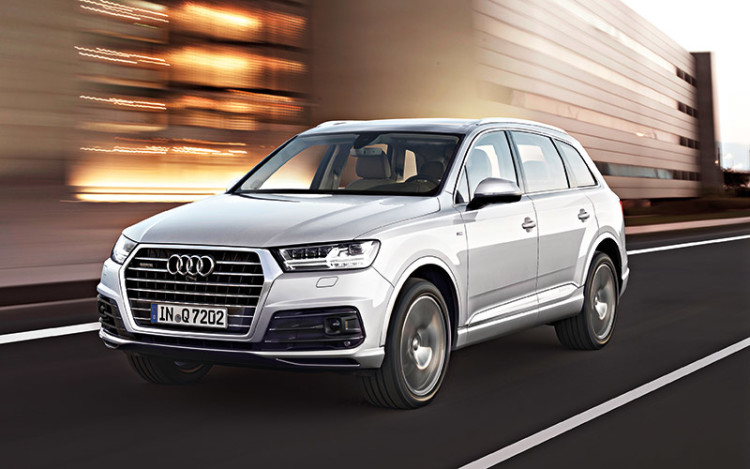 Having driven the last Audi Q7 extensively over the course of its nine-year lifespan in Singapore, as well as in a number of other places, I am quite familiar with the car.

I find it to be a versatile seven-seater, with a level of trustiness on the tarmac that I would easily assign to some of the better sports utility vehicles today. It is a big vehicle, but only relatively so.

The bulbous old Audi is manoeuvrable despite its girth, nimble despite its heft, and possesses a driveability that is three parts effortlessness and one part excitement.

Still, it pales in comparison to what I consider to be its closest rival: the BMW X5. The Bavarian excels in the fun-to-drive department. Like most BMWs, it feels like a BMW at the helm, its dimensions notwithstanding.

Now, the second-generation Q7 is upon us, and it looks like Audi has addressed the only thing that separated the original car from the excellent X5. Uncanny.

The new car is not quite as long or broad as its predecessor, and stands a wee bit taller. But to the eye, it appears to sit lower to the ground, striking more of a wagon pose than an SUV stance.

Its design is noticeably more angular, with its sheet metal now adorned with busy folds and creases. That inescapable shield-like grille is now almost a standalone styling element. It juts out a little, with the four-ring emblem actually protruding outwards by several millimetres. Any person having the misfortune of making contact with a moving Q7 will be “branded” an Audi forever. 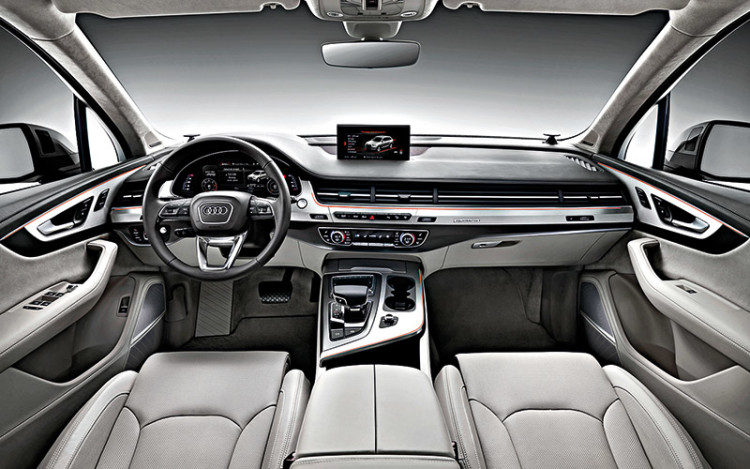 But the likelihood of that is less now, as the latest version has some of the most sophisticated active safety features around (more of that later).

The most startling thing about this car after its design is its weight. Variant for variant, the 3.0 TFSI tested here is 210kg or 9.4 percent lighter than its predecessor – which is quite amazing. The body, seats, doors, engine cooling system and even the cabling are now lighter.

If lightness is next to sportiness, then the new SUV has got its setup right. Along with its slightly more compact stature, shorter wheelbase, 20-inch wheels, newly designed suspension, and all-wheel steering (a highly recommended cost option), the car proves to be delightfully agile on the alpine roads that dominate the test route.

At the wheel, I can take liberties I would not have in the previous model. The Q7’s new chassis, which will be used for the next Porsche Cayenne, handles the size and weight of its moving mass with confidence and calmness.

Along the mountain roads here that seem to go on forever, there are moments when it actually performs more like a plus-size hatchback than an SUV with seven seats. On occasional hairpins designed by sadists, the rear-biased quattro does not lose a step, with its massive bitumen-biting Pirellis working perfectly with the chassis’ balanced architecture.

Never once do those (285/45 R20) tyres complain – not even when peak torque of 440Nm is sent forth by the car’s familiar 3-litre supercharged V6 that surely qualifies as an Audi family heirloom by now. 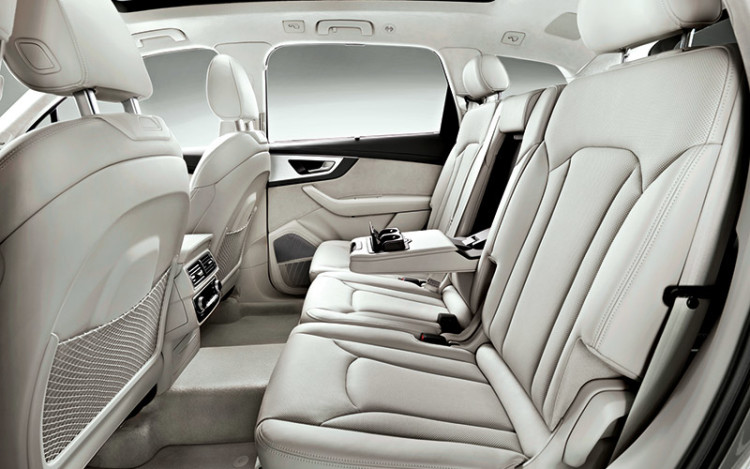 The engine is paired with an 8-speed Tiptronic transmission that has similarities with what you find in some Porsches. Its spread of ratios optimises efficiency without sacrificing responsiveness. It also incorporates a new centre differential, which replaces the separate transfer case in the first-generation Q7.

This setup may have contributed to the car being 37 percent more economical, which is significant.

On less giddy stretches, it impresses with its comfort. It tracks like an arrow, and betrays far less body movement than I would expect of an SUV. Even in Dynamic mode, the air suspension insulates the cabin from the nastiness of badly paved roads, which I might add, are as rare as a broken clock in this land of fondue and snow-capped peaks.

Occupants are also shielded well against external noises, thanks in part to double-glazed windows. Clearly, Audi has found this glass to be worth its extra weight.

The cabin is a nice sanctuary, with a level of luxury above what you experience in an A6 and just below what you see in an A8. The gearlever is the same slim, aeronautically inspired unit first found in the A8. The fascia has a unique row of air-con vents that stretches from the centre console to the door.

The sporty multi-function steering wheel and “virtual cockpit” would be familiar to those who have sat in the latest TT. The overall finishing is much more premium than that of the previous Q7. The doors have soft-closing servos. 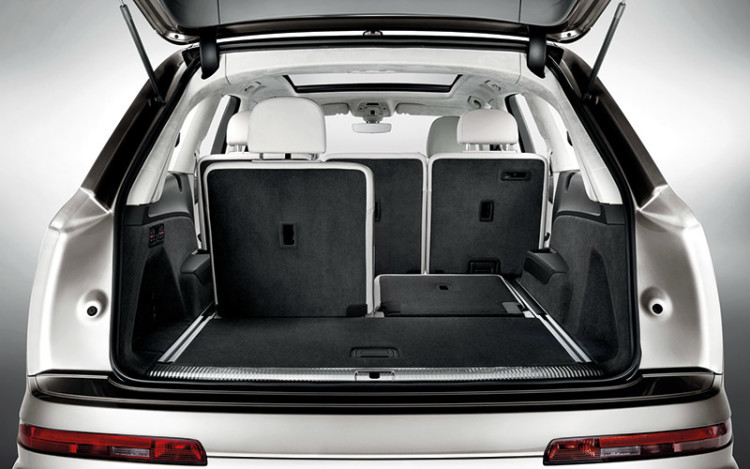 But the one thing that lifts the ambience of the well-appointed interior is the hi-fi. Whether you pick the 19-speaker 558-watt Bose system or the 23-speaker 1920-watt Bang & Olufsen set, you get “3D sound”, which employs an adaptive equaliser to reproduce rich and textured music that seems to envelope you. This is why the double-glazed glass is worth it.

So, the Q7’s handling and fun factor have been enhanced, and so has its level of luxury, comfort and ambience. On this score, it now stands shoulder to shoulder against the X5. But there is more.

The new model showcases a suite of safety features that will no doubt be extended to other Audi models soon. They include adaptive cruise control with traffic jam assist (allows the car to convoy in crawling traffic without steering or throttle inputs), and rear cross-traffic assist (warns driver of an approaching vehicle when he is reversing out of a blind spot).

At up to 40km/h, the car will also apply emergency braking to avoid hitting a pedestrian. At higher speeds, it slows down enough to mitigate injury. Warning lights on the doors will flash if an occupant opens them in the path of an oncoming vehicle.

The one feature that tops them all is predictive efficiency assistant. This GPS-aided system works with adaptive cruise control to actually slow the car down ahead of a turn.

And like its other premium German rivals, the car can also sense imminent danger through erratic or violent movements. It will then tighten seatbelts, close windows (including sunroof) and activate the hazard lights.

At the moment, no other car matches this comprehensive list of safety and assistance systems. Audi Singapore says it plans to introduce these features to Q7s imported here. 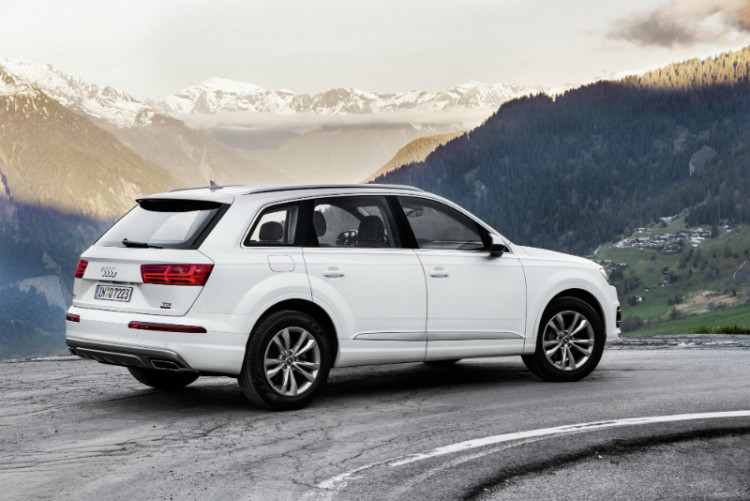 It is obvious this car has improved remarkably in the areas of driving dynamism, luxury, comfort and safety.

The only thing Audi has not improved much on is the useability of the third row. While it claims that interior space has not been compromised by the car’s reduced dimensions, this is not evident.

While electric motors assist in the folding and unfolding of the third-row seats, passengers still need to exert their forearms to move the second-row seats away (with at least two movements to gain access to the last row).

The new automobile is available initially with V6 engines: a 3-litre petrol TFSI or a 3-litre diesel TDI. There is also a plug-in hybrid with 700Nm and an all-electric range of up to 56km.

For now, only the 3-litre TFSI Q7 will come to Singapore, in September. It will be followed by a 2-litre 4-cylinder TFSI version, slated to debut by year end. With a lower equipment level, it could go for less than $300,000.

Because it is the first new Q7 in such a long time, and because it is so jam-packed with eye-popping goodies and newfound capabilities, Audi’s second-generation flagship SUV will have a steady stream of buyers lining up for it.

But I suspect it will not drastically diminish the appeal of the previous model, which should hold its value in the secondary market. After all, the old horse has proven itself to be sturdy, dependable and versatile, even if it has far fewer bells and whistles than its successor.