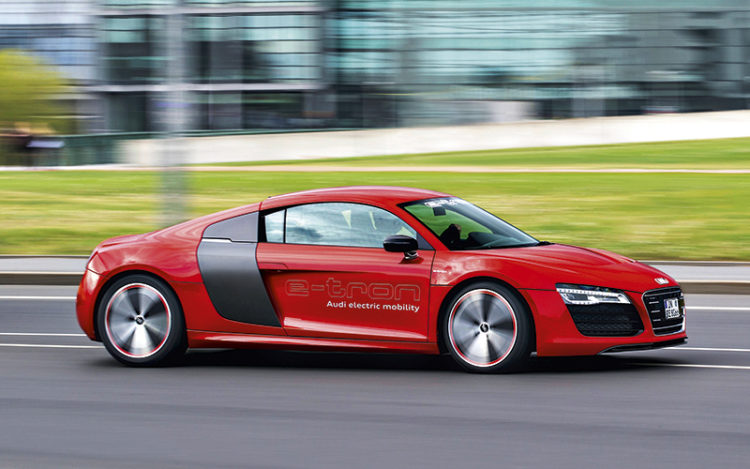 The Audi R8 e-tron is a full-size copy of the Audi R8 V10, but the R8 e-tron is actually a totally different product. In fact, it shares only nine components with the regular R8. Everything else is bespoke and, technologically, on a different plane.

Originally called “e-tron” in its 2009 concept form, Audi’s electric sports car was slated for production in 2013. But for some reason, and much to everyone’s disappointment, Audi has announced that it won’t be selling the R8 e-tron to the general public after all. Instead, the automaker has built 10 development units and registered them for road use in Europe. This, it seems, is sufficient to call them production cars, but you cannot buy one and drive it home (unless your name is Tony Stark or something). 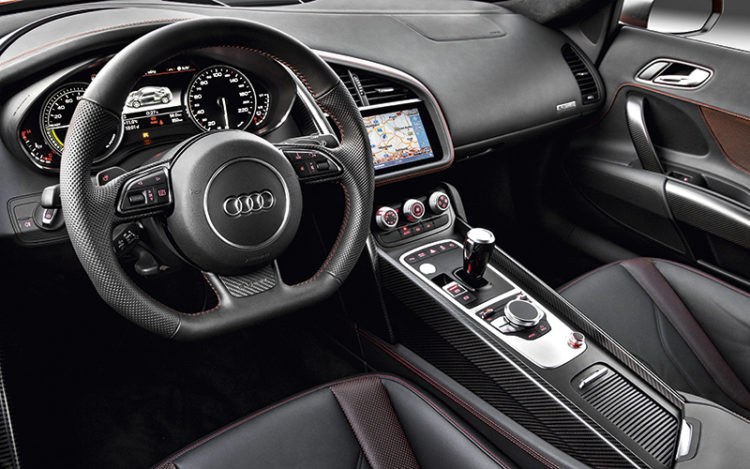 The R8 e-tron is a car built with so much high technology, its price would easily run into seven digits (euros). The superstructure and body panels are constructed using a combination of ASF (Audi Space Frame) and carbon fibre reinforced plastic (CFRP), while the four-wheel fully aluminium, double-wishbone suspension is sprung by coil springs made from glass-fibre reinforced polymer (GFRP). There is an additional high-tech feature in the front – the anti-roll bar is made from lightweight aluminium and sheathed in CFRP.

During the development of the R-8 e-tron, weight was considered to be a primary criterion, in order to optimise the combination of motor power and battery life. Electric vehicles need to be as light as possible, because their batteries contribute significantly to the total mass, which in turn has a direct effect on energy consumption and useable range. 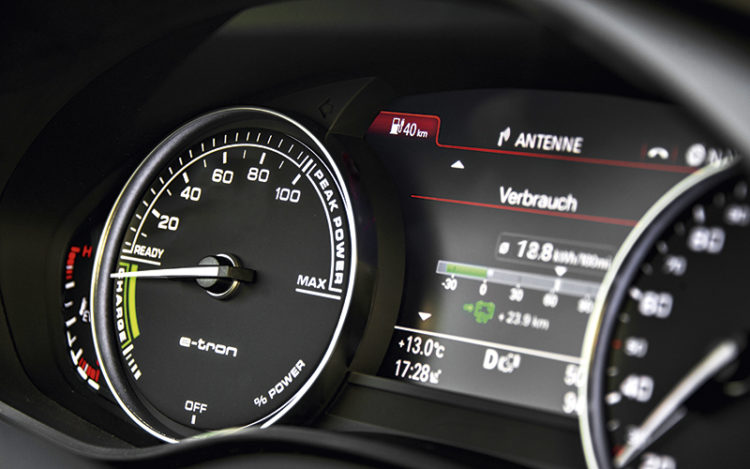 The R-8’s energy storage is an assembly of lithium-ion cells in a T-shaped, 2.3m-long housing that forms the central backbone of the car but plays no part in structural integrity. By itself, the lithium-ion battery pack weighs 580kg, while the car’s total weight is 1780kg, which is 210kg more than the R8 V10 Plus.

Inside the cockpit, it’s familiar R8 territory, put together with Audi’s usual attention to detail. Most of the instruments and switches are shared with the standard R8, with the main exceptions being the large “powermeter” (which shows the power output and energy recovery on a scale from 0 to 100 per cent) and the “digital” rear view mirror. The latter uses a small Amoled (active matrix organic light emitting diode – think Samsung smartphone) screen linked to a digital camera, which feeds a “live rear view” to said screen from the top of the “engine” cover. 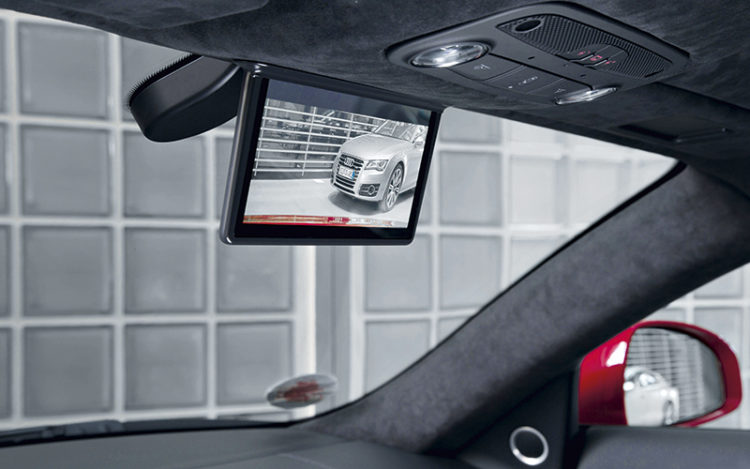 Located mid-ship is the car’s powertrain, which comprises two 140kW (190bhp) AC synchronous motors sitting along the rear axle line. Each motor has its own planetary reduction box and transmits up to 410Nm of torque to its “assigned” rear wheel (the motors have no mechanical connection to one another). As is typical of electric motors, their maximum torque is available from start-up, which means the driver need never wait for maximum thrust to arrive.

Accelerating in the R8 e-tron with full “throttle” from a standstill is an incredible experience. All that torque is electronically modulated to such a fine degree that, despite the massive and seamless shove (0-100km/h in 4.2 seconds), the rear tyres never lose traction. A nice touch is the artificially generated engine noise – called “e-sound”, it’s not too loud, not too irritating, but noisy enough to hide the “radio-control toy car” whine. 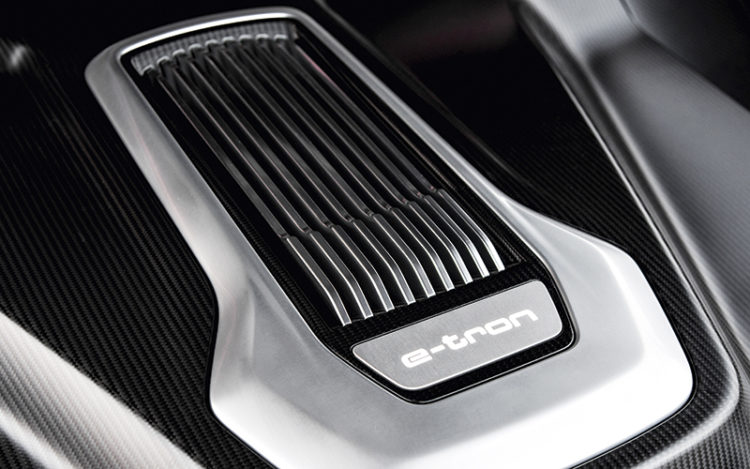 Unlike the V8 and V10 petrol R8s, the e-tron doesn’t have quattro all-wheel-drive, partly to reduce the overall weight of the drivetrain. Besides, any space in front under the “boot” lid is occupied by the complex climate control system, which provides air-conditioning for the cabin and cooling/heating for the batteries and motors.

The rear-drive motors are individually computer-controlled, so they can deliver torque to the appropriate wheel according to the car’s behaviour. At the same time, electro-mechanical rear brakes (the front brakes are hydraulic affairs) can be activated accurately and in fractions of a second to provide decelerating torque to either wheel. Together, the system is capable of managing the car’s high-speed stability and controllability. Audi calls it e-vectoring, which theoretically makes conventional selective-braking ESP (electronic stability programme) or a good old LSD (limited-slip differential) seem rather crude. There are three driving modes to select from (Normal, Auto and Sport), each with its own software and settings that alter the driving characteristics. There is even an ESP that can be switched off to sharpen turn-in response and allow a small degree of oversteer. Whatever the driving mode, the electric R8 is astonishingly grippy and remarkably responsive to steering, braking and accelerator input. The car simply refuses to misbehave, no matter how aggressively it is driven. It would have been interesting to thrash the car on mud or snow just to see how clever its e-vectoring system can be.

What’s truly amazing about the R8 e-tron is that despite its electronic trickery, it offers immense driver satisfaction like a properly sorted supercar. It’s a practical electric vehicle, too, with a range of over 200 kilometres (dependent on motoring conditions, ambient temperature and other parameters) after a 12-hour recharge from the domestic mains (230-volt alternating current). Iron Man’s machine, indeed.