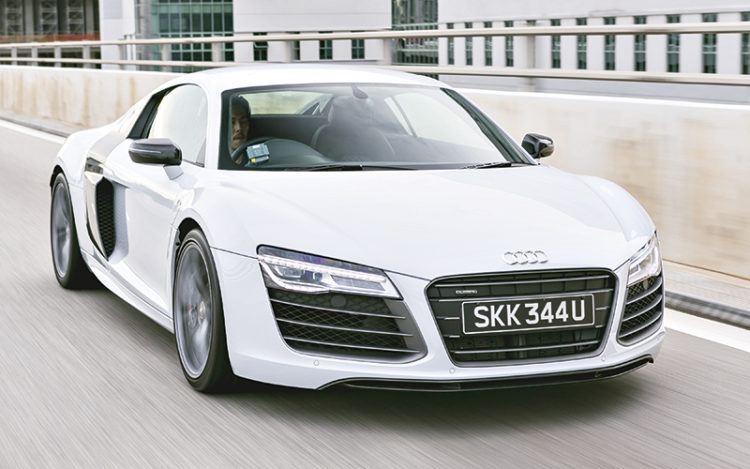 Once the most common engine format in Formula One racing, the V10 is now a rare production motor. In fact, there are just four current performance cars in the world with V10s, and two of them actually share the same powerplant (the others are the Lexus LFA and Dodge Viper). These, of course, would be the Lamborghini Gallardo and its cousin-by-marriage, the Audi R8 V10.

Audi’s first supercar was initially launched with one engine, the charismatic 4.2-litre V8 that had earlier made the RS4 such a stonking performer. It also gives the mid-engined R8 plenty of oomph, but then, Audi had a proven V10 readily available from the Italian side of the extended family. 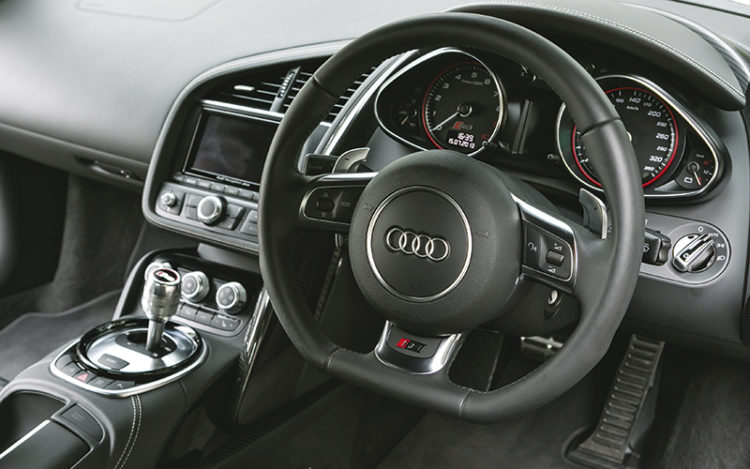 True supercar architecture, ambience and materials in the R8, which is no harder to drive than the TT.

There was room in the R8’s mid-engine bay to take the slightly longer V10, which would be a tad lighter and a smidgen more economical than a V12. It seemed the logical thing to do. Thus was born the R8 V10 (not “R10”), with the rest of the R8 left largely unaltered.

Now in its sixth year, the R8 V10 Plus still looks as fresh as the day it arrived and continues to turn heads everywhere it goes. With its large Audi grille, unusual full-height air intake panel behind each door, and gently curved sheet metal, the R8 V10 Plus is immediately distinguishable from any other mid-engined supercar. It looks smooth, uncluttered and, some would say, timeless. Still, the customary industry practice is to perform at least a nip/tuck on any model once it’s past the age of three, no matter how good it looks. Sometimes, during a car’s initial development, certain styling elements aren’t introduced at launch but reserved for the facelift. The idea is to make the car look just a little bit better to take it another two to three years, although there have been cases where automotive facelifts, like botched plastic surgery, have gone horribly wrong.

The Audi designers must have had a tough time deciding just what to tweak, as the R8 is one of those “perfect-from-the-start” models. What a relief, then, that the changes made to the exterior of the “renew” R8 V10 Plus (and regular R8) are so incredibly subtle that the “old” original continues to look current. 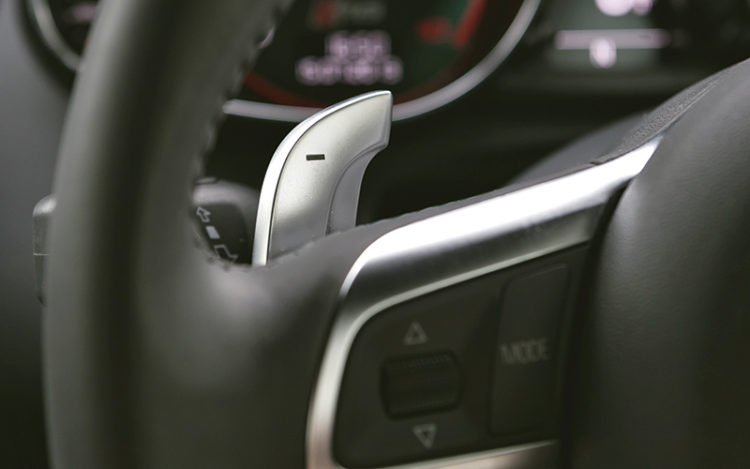 Most obvious are the R8 GT-style alloy wheels finished in dark grey. If you look close enough at the front end, you’ll see new, full-LED headlights sitting above matte (instead of glossy) intake grilles. The same theme is applied at the rear – LED lamps and matte “titanium” grilles. The original R8’s “Star Wars X-wing fighter” tail-lights are no more, but the new ones are even cooler because when they’re lit, red illuminates the perimeter of the cluster and the “black hole” within is where the even brighter brake lamps sit.

At the bottom of the lamp unit, the slim amber indicator strips are the highlight of the refreshed rear end – the LEDs “run” outwards like on neon advertisements. Won’t be long before you see these “dynamic turn indicators” on other cars. 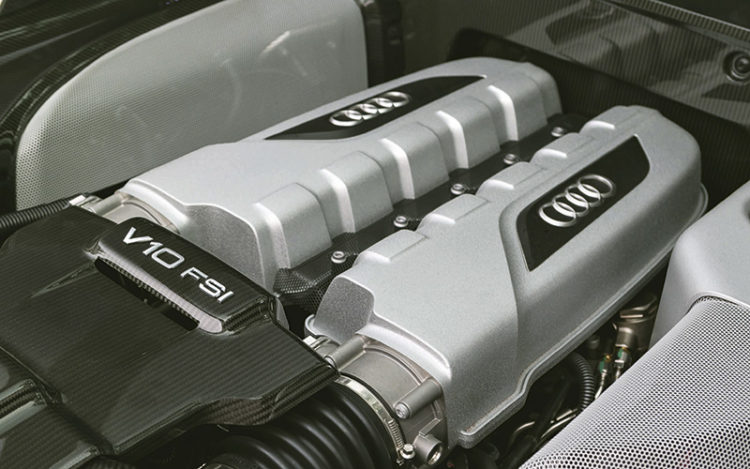 R8 Plus’ 5.2-litre V10 from the Lamborghini Gallardo produces a furious 550hp and a glorious 10-piston soundtrack.

The Audi Space Frame and aluminium body panels remain as before, but more composite materials have been used, particularly carbon fibre reinforced plastic (CFRP), in order to trim the weight. Most noticeable are the exquisitely finished CFRP covers that are laid out around the V10 engine to expose only the twin, parallel anodised aluminium intake plenums. It is a visual treat indeed, and for show-offs, there are white LEDs to illuminate the engine bay in the night.

The really smart changes, however, aren’t visible, so they must be experienced from behind the wheel. The V10 Plus is so-called because among other additions, the engine has an extra 25bhp, bringing the horsepower tally to a cool 550bhp. That 10-cylinder sounds as good as it always has, and spins to 8700rpm. Being naturally aspirated, the torque peaks at a somewhat high 6500rpm, but thanks partly to the 12.5:1 compression ratio, the V10 Plus delivers 540Nm. 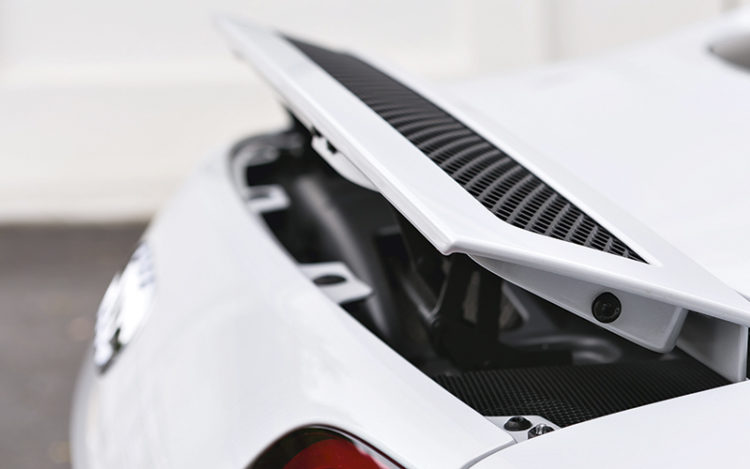 One flaw the R8 has lived with since its introduction is the erratic, automated 6-speed transmission. It requires some getting used to and is most unhappy if treated with even a modicum of aggression. In fact, it demands carefully matched actions of the right foot and hands in manual mode. Even left to its own devices (auto), it could get quite jerky unless the accelerator pressure is eased for upshifts. Frankly, it would have taken some practice to get the old R8 V10 to sprint from rest to 100km/h in the claimed 3.9 seconds.

That problem has been fully addressed in the new V10 Plus. The old automated single-clutch 6-speed gearbox (that actually came from Lamborghini) has, as far as the Audi R8 is concerned, been retired. In its place is one of the best automatics in existence – the Dual Clutch Transmission (DCT). One of the very first production cars with a DCT was an Audi (TT), so it’s rather surprising that the R8 has had to wait this long to get one. 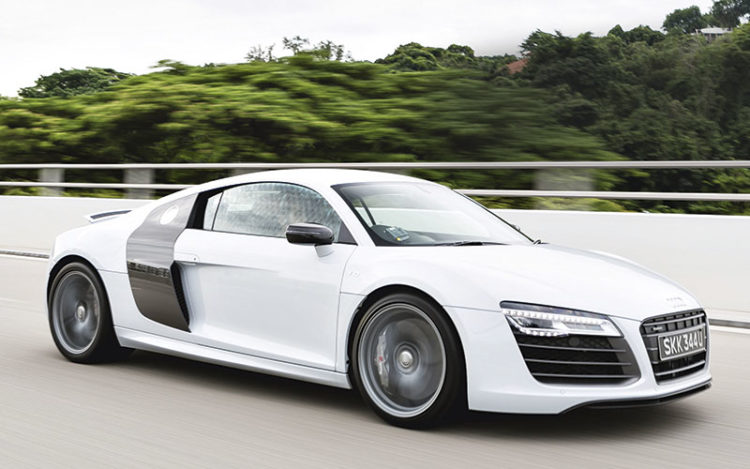 Any businessman can “fly” like Iron Man when he’s piloting Audi’s greatest vehicle.

The new 7-speed dual-clutch S tronic gearbox is so good, owners of the old R tronic cars will be rather depressed reading this. Accelerate with a wide-open throttle and you can bet the R8 V10 Plus will do the 0-100km/h sprint in 3.5 seconds, as claimed. It’s easy, effortless and seamless.

Because the gearshifts are so clean, sharp and immediate, they encourage the use of the manual paddles, whether to shift up or down. All those slick-and-quick gearchanges will no doubt help with fuel efficiency. Audi claims that the R8 V10’s petrol consumption has been improved by as much as 0.9 of a litre per 100km, while carbon dioxide emission has dropped by 22 grams per kilometre. 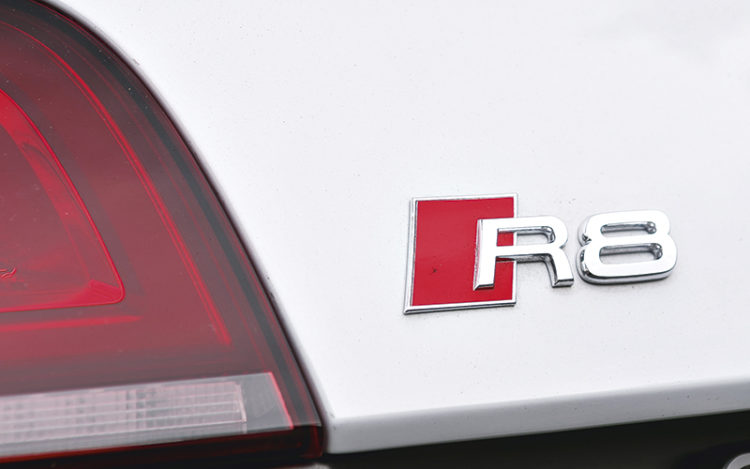 Only minor changes have been made to the suspension, and the R8 remains one of the best-riding high-performance cars in the world. Even in slightly harder Plus specification, the R8 takes every road we throw at it with a smile, and these include some appalling work-in-progress streets in Tuas. It’s a testimony to the car’s sound suspension design that you can accelerate, corner and brake hard (very hard indeed) without ever ruffling its stability on badly surfaced roads. Standard brakes for the R8 V10 Plus are 6-pot callipers in front and 4-pot in the rear, all acting on lightweight carbon-ceramic discs. It stops brilliantly!

The quattro all-wheel-drive is one of the perks of R8 ownership. It is biased 85 per cent to the rear, but in the extreme, the viscous centre differential can transmit up to 30 per cent of the torque to the front wheels. The front-rear torque split is passive and relies on the differential fluid’s viscous adhesion. When one pair of wheels begins to spin faster than the other, the multi-disc front-rear coupling starts to slip, but the fluid’s strong resistance to “shear” would effect the torque transfer. The viscous differential is really a fascinating device and, yes, its function is actually as simple as it sounds. 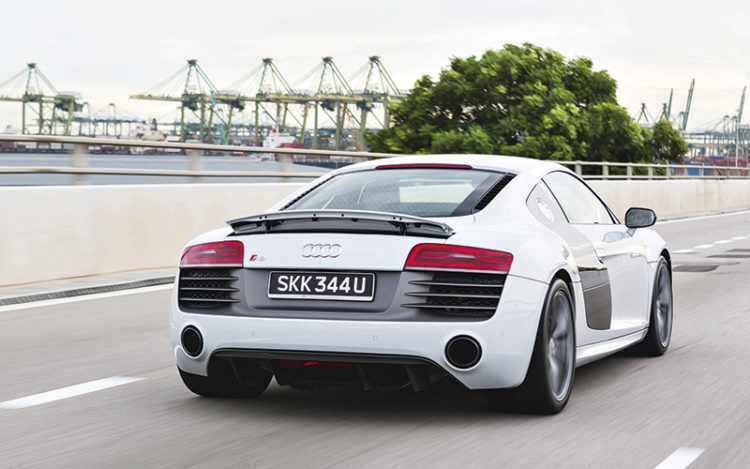 Where the quattro does its magic is on wet roads. The R8 can perform full-throttle acceleration and deliver thrust coming out of a curve without any hint of traction loss, oversteer or understeer. Try that in any 500bhp rear-drive car and the traction control lights will flash excitedly, instantly followed by an abrupt throttle cut-off. Deactivate traction control in said car and perhaps you might have more fun than in an R8, but only if you have the space and skill to do so.

No doubt, the R8 V10 Plus is an awesome performance machine. It is built to the highest standards, offers loads of driving pleasure with its easily accessible performance, and possesses all the comfort and convenience needed for daily use. Only problem is, with Singapore’s car tax structure made more punitive recently, the ultra-Audi’s pricing has been pushed into the “small condo” category.