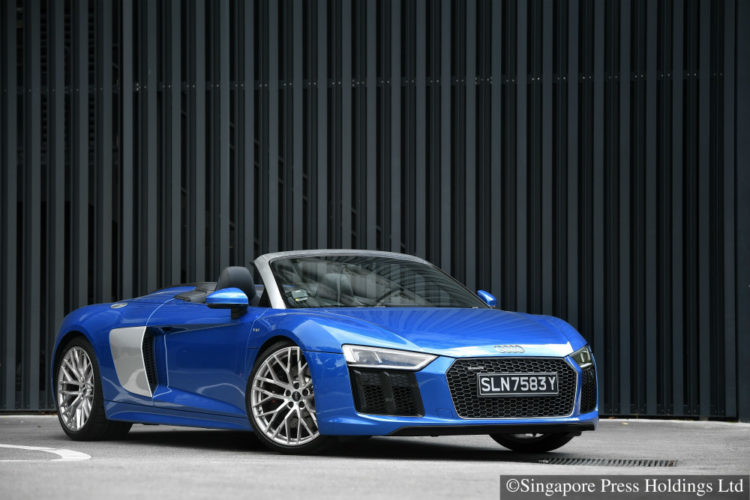 The world is so full of turbocharged engines that we have lost our way to a place where the joys of natural aspiration can be found.

The Audi R8 V10 Spyder leads us back to that place. And as anyone who has driven a big, naturally aspirated V10, been in one or merely heard one go by will attest, nothing comes close to raising the hair on your neck.

The 5.2-litre V10 powering the second-generation R8 Spyder can also be found in the Lamborghini Huracan. It remains the only non-turbo engine in the Audi family.

In song and vigour, it matches the other memorable V10 – the Lexus LFA’s 4.8-litre gem. But the R8 is far more attainable than the exotic limited production LFA, even if it is the most expensive Audi in town.

If you have some $900,000 in spare change, there are worse ways to spend it than on this lovely open-top V10 rocket.

For starters, it looks like a million bucks (so you are already in the money if one rolls into your garage). Audi has made it slightly shorter but wider than its predecessor. Hence, it appears to hug the tarmac more.

Wearing massive 20-inch wheels with hardly any rubber on them, the car has a seriously sporty stance.

Its visual appeal aside, the extra width translates to a slightly wider rear track. Compared with the previous car, this R8 seems to pivot around a centre you can feel more acutely. It takes to sharp bends with menacing curbs with aplomb, often with no need for mid-stream steering correction. It feels like a smaller car, something like a roadster. And, of course, the performance afforded by its sweet and stout V10 is astounding. With 540bhp and 540Nm of torque carrying a body that is 25kg lighter, the century sprint is dispensed with in 3.6 seconds (versus the last model’s 4.1 seconds). It hits a top speed of 318km/h (up from 313km/h).

Some of the credit goes to its 7-speed dual-clutch transmission, which makes the R8 a whole lot more comfortable than before.

Under light load, the V10 shuts off one bank of its cylinders to conserve fuel. It thus drives (and sounds) a little like a five-cylinder car when you are tooling about in town.

But if you want to live well, put the car in Sport mode and its chassis in Dynamic, and activate the woofers in its exhaust system. This way, you get to savour the splendour and glory of the 10-cylinder R8 Spyder.

You can roll down its rear windscreen for a more intimate aural performance. Or better still, drop its top for an unequalled mix of heavy metal symphony and sheer wind-in-your-face speed.

Drive it hard through a tunnel and you get a bigger blast than you would at next month’s Singapore Grand Prix. But it will be a very brief blast, seeing how the car breaches speed limits here within three seconds.

Lethal as it is, the new R8 Spyder is surprisingly comfy. Its ride is very firm but far from harsh. Its sports seat offers the best support among seats of its kind, with the entire structure feeling like it is foam- formed around your spine.

The cockpit is as ergonomic as before, with new switches and dials to make the cockpit more modern and and smarter. For instance, a chequered-flag button on the steering wheel allows you easy access to the beast within the R8.

There are now digital readouts that track G-forces, as well as the amount of power and torque being dispensed. But you do not need them to know that the V10 sitting right behind you is a phenomenal piece of engineering.