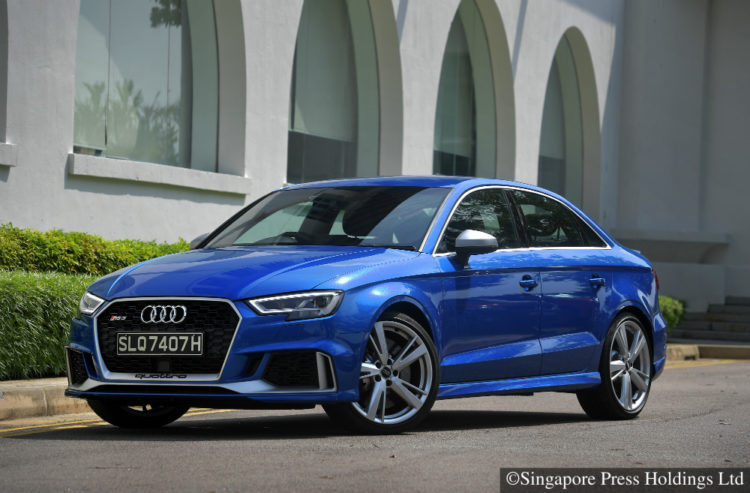 Consistency is an underrated quality. You may be a creditable performer whom your company and co-workers can count on year in and year out, for instance. But come assessment time, your bosses are still going to ask: “Yeah, but what else can he do?”

In the automotive world, carmakers often find themselves having to continually come up with better products. It is what is expected of them. Which is why a new product is invariably bigger, faster, fancier and yet somehow more efficient than the previous one.

An example of this is Audi’s RS3 Sedan, the latest in Ingolstadt’s exemplary line-up of sizzling sports cars that can be enjoyed on as well as off a racetrack.

It is powered by the same 2.5-litre five-cylinder turbo found in the pre-facelift RS3 Sportback introduced here just a little over a year ago. But its maximum power has risen by 33bhp to 400bhp, and peak torque has crept up by 15Nm to 480Nm. As a consequence, it is a quicker car, with the century sprint accomplished in 4.1 seconds – versus 4.3 by the Sportback.

Mind you, it is only a tad lighter. Yet it is 30 per cent more economical, returning 11.9km per litre.

Whether you believe this seemingly improbable ability on Audi’s part to bend the laws of physics, one thing is for sure: the RS3 is one heck of a car to drive.

Like all the preceding models bearing the RS badge, this pocket rocket feels like it is tailor-made for you. Much of this can be attributed to its effortless steering and unshakeable traction.

As much as you feel its ballistic output, there is rarely a moment when you think it is going to overwhelm you. In fact, you will be hard put to come up with another 400-horsepower, 4.1-second racer that feels so civilised, so controllable and yet so electrifiying. 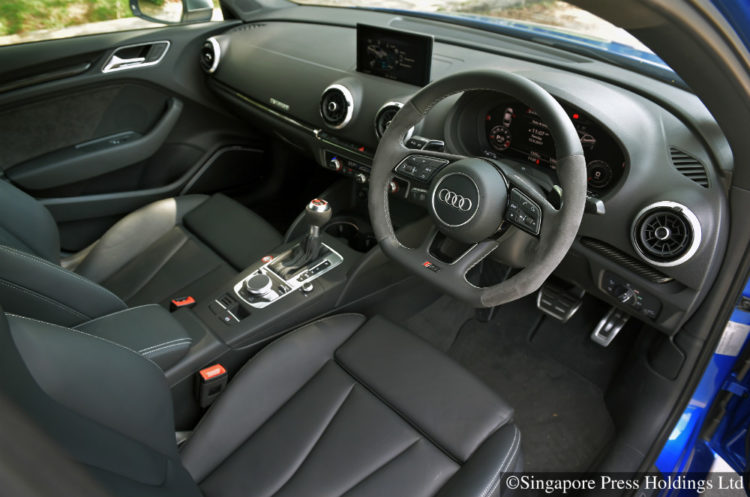 As with all previous RS cars, it makes wonderful noises, from the moment you crank up its engine. Open up for a quick getaway and the five-cylinder makes a good imitation of a V8. Slow down for a corner and the dual-clutch gearbox downshifts with smile-inducing throttle blips.

To dial up the fun, pull the gear lever down to activate Sport mode.

That the car is derived from the modest A3 just makes it more impressive. Then again, seeing how big cars have become over the years, the RS3’s size adds to its strength.

Nevertheless, it is still an immensely impressive engine, which makes for an immensely satisfying drive. While there may be more powerful cars out there, the beauty of the RS3 Sedan lies in the fact that it is not a bronco, but a well-trained thoroughbred.

In short, you do not have to work very hard to enjoy its prowess.

The only thing is that Audi has made its S-series cars (which are a notch below the rarefied RS) so good that it becomes a little excessive to get an RS3 when an S3 is almost as enjoyable to drive.

As if to tell the world it is special – indeed, more special than the S3 – the car’s large shield-like grille is embossed with a big “quattro”.

Again, it is superfluous and queer, since several Audi cars have quattro all-wheel-drive too. It is trying a little too hard. Then again, you cannot blame Audi, since being consistent – which RS cars have been – is no longer good enough.