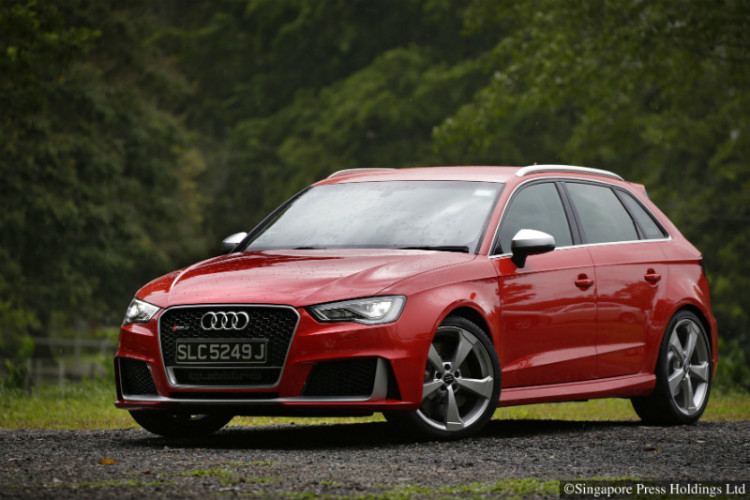 The new RS3 is the most hardcore RS car from Audi yet. Not in terms of sheer output, but in the way it delivers speed, the way it handles and the way it makes you feel at the wheel.

On the go, the compact hatch comes across clearly as being set up first and foremost for performance. Its ride is rock-hard, with a fixed-rate steel suspension calibrated specifically for carving up the tarmac.

Its brakes exert the bite pressure of a T-Rex – great for bringing the 367bhp car from three-digit velocities down to single-digits in a jiffy, but often jolting earpieces out of place in the process.

Speaking of earpieces, you would be able to hear the RS3’s pounding metallic bark even if you had AC/DC playing millimetres from your eardrums.

Its 2.5-litre 20-valve five-cylinder engine wakes up with a series of seismic blasts emanating from its bazooka-like tailpipes. Even with the windows up, they sound like cannon shots – a little overdramatic, but completely in line with the car’s image and proposition.

Pull its seven-speed dual-clutch transmission lever to D and the car catapults from its position with the gentlest throttle pressure.

Acceleration is dished out by the buckets. If you are in possession of sufficient guts and road, maintaining pedal pressure will see the car relegating the scenery into a blur fairly quickly.

A heavy shove of the right foot is quite capable of sending shivers down your spine. The turbo engine goes from a soft deep rumble to a full-scale aural assault as the gearbox downshifts by a couple of cogs to deliver urgency with frightening flourish.

With 465Nm on tap (up from its predecessor’s 450Nm), the beastly Sportback completes the 0-100km/h sprint in 4.3 seconds. That is 0.3 seconds quicker than the previous RS3, which was already a very ballistic car.

Besides the heightened output, the new RS3 benefits from a 55kg weight loss. Its power-to-weight ratio improves from 203bhp per tonne to 230bhp per tonne.

For something so fast and furious, the car is surprisingly easy to drive. Yet, there is never a dull moment at the wheel.

Its steering is super sharp and its chassis is balanced and planted, while at the same time affording the neutrality of an all-wheel drive.

The ride, however, is too punishing for non-track use. Combined with its 19-inch wheels and vice-like brake callipers, the RS3 is not exactly your first choice if you want a relaxing drive.

But if you are a red-blooded, young and enjoy pounding the bitumen (literally, in this case) in a high-adrenaline racer masquerading as a practical five-seater, there are very few cars that will do the job as convincingly as the RS3.

It is a rather well-furnished machine too. It has navigation (a first for the RS3 Sportback), full LED headlights and tail-lights, a partial Alcantara flat-bottom steering wheel, Nappa leather upholstery and a Bang & Olufsen sound system (previously, Bose) which gives the small car the ambience of a concert hall.

The hi-fi is best enjoyed when the engine is kept well below 3000rpm – which is possible because it has so much torque, but not probable because of the immense excitement that comes with high revs.