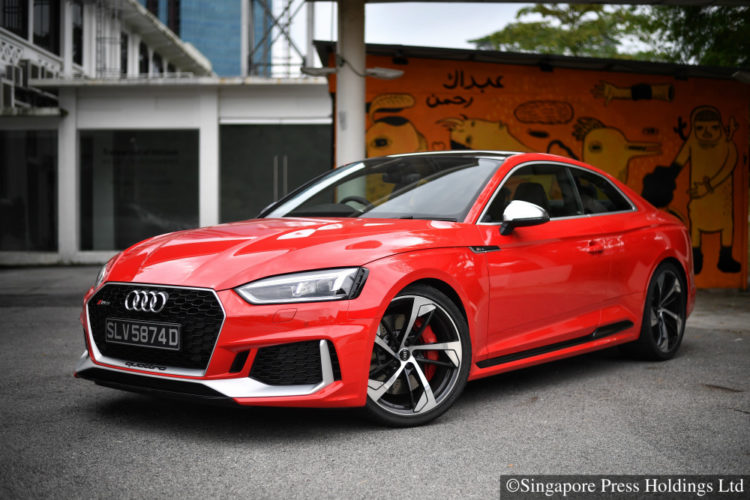 The all-new Audi RS5 Coupe is the first RS to have a 2.9-litre turbocharged V6, and it is all the better for it.

It is punchier than the previous 4.2-litre normally aspirated V8, and right from a low rev range. While many turbocharged sports cars lose their aural appeal because they operate with such leisurely engine speeds, the new RS5 manages to sound rich and creamy throughout.

The car’s acceleration is ballistic, hurtling to 100kmh in 3.9 seconds – making it almost as quick as the Ferrari California and a whole lot quicker than the previous 4.2-litre RS5.

If one is not prepared, a hefty shove of the right pedal will bring on a blackout-inducing G-force. Its rocketing prowess is not adequately captured by the benchmark century sprint. With 600Nm of torque available from 1900rpm to 5000rpm, access to Porsche-shaming performance is instantaneous and sustainable at almost any speed.

The downsized engine is interestingly smaller than the Audi S5’s 2.9-litre (2894cc versus 2995cc). They share the same block, but the valve lift within the RS5’s unit has been shortened to deal with the higher pressures whipped by its two turbochargers.

The new car is bigger all round, but is lower slung. There is more room inside as a result, qualifying the RS5 to be a little better as a grand tourer than before.

The status is not enhanced just by space, but also by how the car drives. With access to insane output at low revs, it has a far higher degree of effortlessness in day to day journeys. 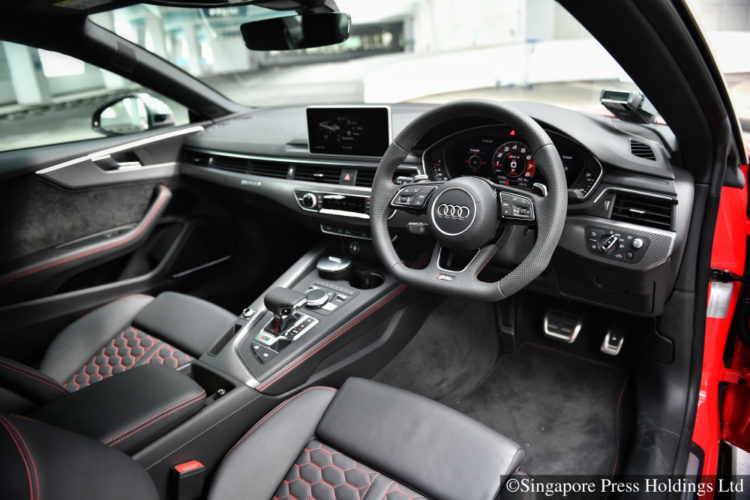 The car’s 8-speed automatic (versus the previous 7-speed dual-clutch) contributes to this sensation. Even though it is set to channel explosive power to its rear-biased all-wheel-drive system, its eighth gear has a relaxed long-leggedness to it.

The transmission is extremely throttle-sensitive and will drop a cog or two the moment it senses an increase in pedal pressure. This makes the two paddle shifters a little redundant except for the demonic cornering manoeuvres.

And even though RS cars are never lacking in the cornering department, this one still manages to surprise. Around fast and sharp bends, it displays extraordinary stickiness and poise.

Yet, the ride remains well within the comfort range – even when the car is in dynamic drive mode.

As with most modern Audis, a tug at the gear lever will bring on a noticeably higher level of sportiness. It is here that the RS5 sounds most rousing, with its exhaust sounding almost as deep and stirring as the V8’s. I do not have to rev it intensely to get it to sing.

Occasionally, I do so anyway, just to revel in the car’s monumental performance. To rein in this new suited monster, the brakes are bigger. And they really bite and, at times, a little too hard.

Just as Audi’s S models are a little sportier than before, the RS5 shows a more comfy and luxurious side of the RS range never seen before. The car is also dishy to look at.

The best thing is the price, though. From close to half a million dollars, the RS5 Coupe is now more accessible at below $390,000.