Audi RS6 Avant is an estate with the warp factor | Torque
Loading posts...
0 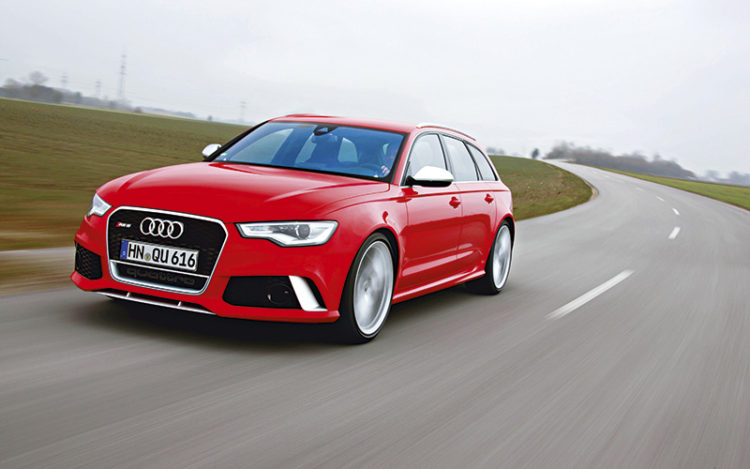 There really is something quite perverse about Audi’s RS6 Avant. True enough, any car equipped with a weapons-grade 560bhp, 4-litre twin-turbo V8 that gets it from a standstill to 100km/h in 3.9 seconds, and which goes on to do 305km/h (after the 250km/h electronic limiter is removed), can seem a little, well, excessive.

But anyone would be hard-pressed to deny that it does indeed take a truly twisted mind to pair said engine with a manufacturer’s most practical car, as in the case of the RS6. Incidentally, that epic motor is also Audi’s most powerful engine today, even eclipsing its R8 performance flagship’s V10 which boasts 525bhp. The RS6 is so rapid, it nearly puts the R8 in the shade. For a handy frame of reference, the R8 accelerates to 100km/h in 3.6 seconds, and its top whack is 314km/h.

This sort of insanity could only come from the fevered minds at Audi’s skunkworks division, quattro GmbH, who saw fit to debut the hallowed RS badge, now reserved for Audi’s most manic vehicles, on the RS2 Avant estate in 1993. 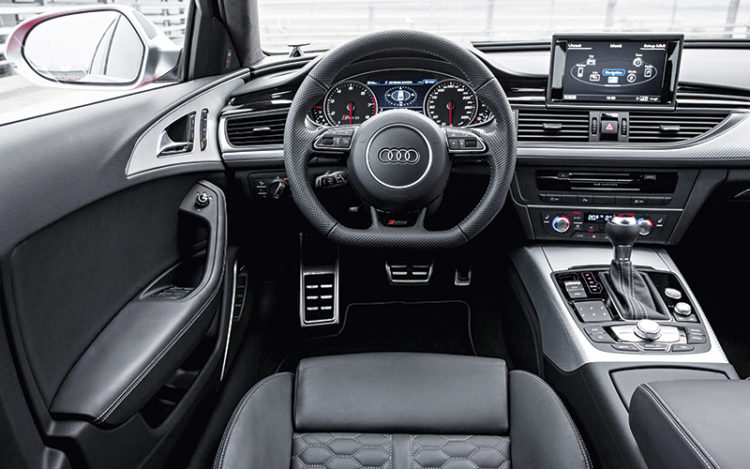 So with two decades’ experience building ridiculously rapid load-haulers, the results here are quite impressive indeed. When the throttle/gearbox map is set to the most aggressive Dynamic mode via Audi’s familiar Drive Select system, the RS6 feels almost like there’s an atomic bomb wired to the throttle.

Its mid-range is equally impressive, seeing as how it has 700Nm of torque available from 1750rpm to 5500rpm.

Teamed with a superlatively slick 8-speed automatic “with shortened shift times”, the RS6’s drivetrain is an object of rare beauty. It seems to develop power anytime, anywhere, with little delay between throttle inputs and a firm shove in the kidneys as it sends you hurtling (with alarming speed) towards the horizon. 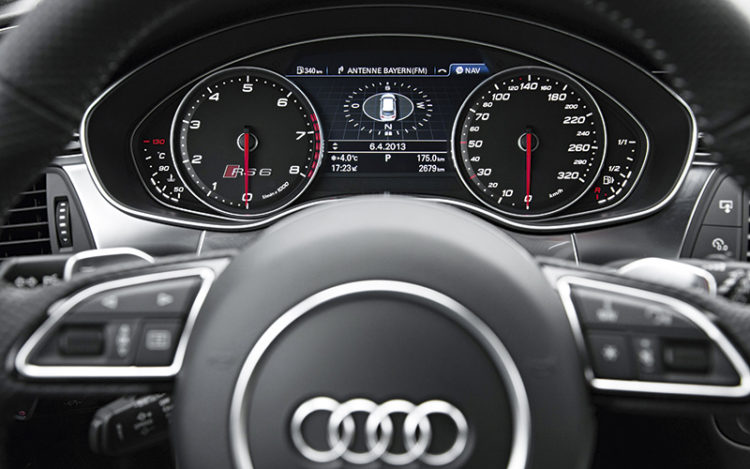 That sort of accelerative mania and the unrelenting manner in which it gains and holds onto speed, plus the addictive way its optional RS sports exhaust crackles on downshifts, mean this drivetrain wouldn’t be entirely unwelcome on a big GT.

Indeed, like a GT, it quite easily (and greedily) gobbles up the miles. 120km/h barely rates as a canter, and the car feels utterly composed even above 200km/h. The only clues as to how fast the RS6 is actually going are the increasing blurriness of the passing scenery, the more insistent rushing of the wind by the door mirrors and the looming thought of how large a greasy stain one would leave on the countryside should one hit an object at that sort of speed (a speck of dust, for instance). 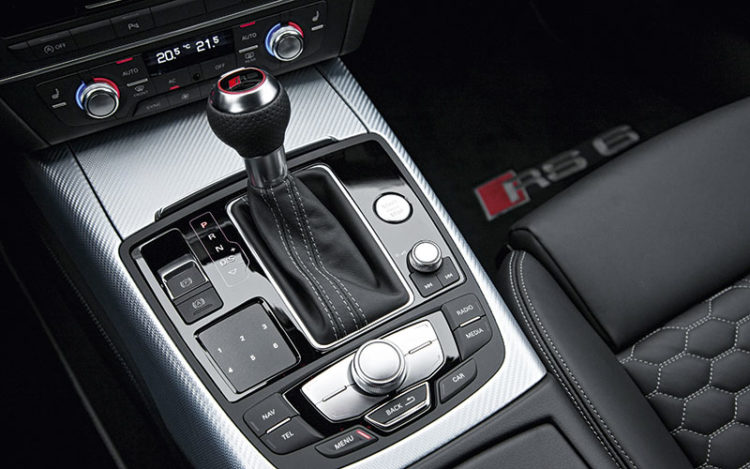 Carbon fibre inlays are standard, but decorative wood and aluminium are available, too.

But unlike a GT, the RS6 can also accept up to 1680 litres of cargo (basically a medium-sized sofa) via a tailgate approximately the size of a barn door (remember what we said about perverse?).

But again, unlike a GT, which according to archetype is pretty comfortable on twisty back roads, the RS6’s dynamic range is quite a bit narrower, in contrast to its broad practical range. Against its portly predecessor, this RS6 is nearly 100kg lighter, with a more compact engine and an improved quattro all-wheel drive sytem. 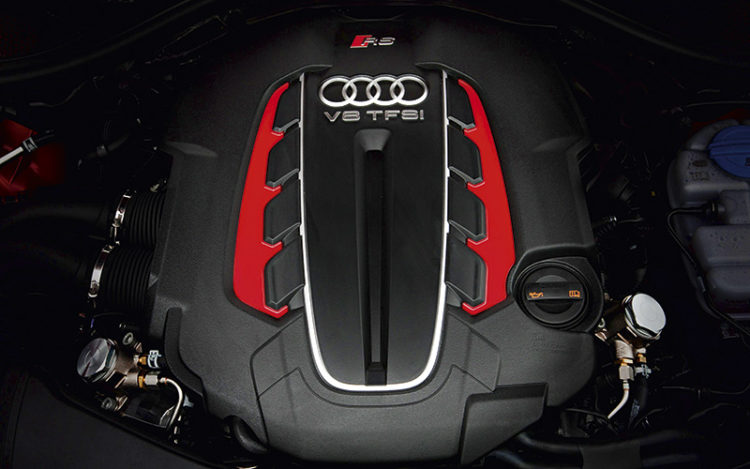 Twin-turbo V8 delivers 560hp and a crushing 700Nm of torque.

Insofar as we can tell, all the above works. The weight loss makes it ride a whole lot lighter on its feet, and its nose darts with more keenness into corners.

Also, the new four-wheel drive system can brake the inside wheels during cornering and now features torque vectoring to send rear wheel power to where it’s needed, to aid in more neutral handling. It also comes with an adaptive steering system that can perform “tiny steering corrections autonomously”, according to Audi. 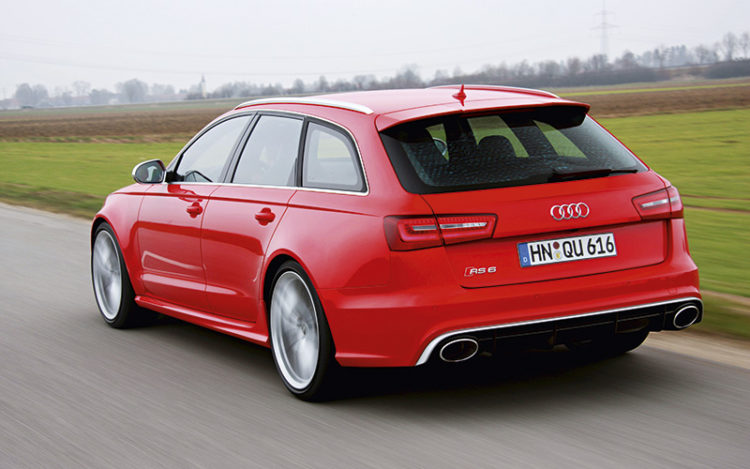 That’s something we’ll have to take their word for. Coming close to “the cornering limit” when the autonomous steering system is active will take plenty of faith in the mechanical grip generated by the four-wheel drive, the expansive 285-section Pirelli P Zero tyres, and the deity of your choosing. In short, it’s pretty much the same story as its predecessor, mostly – stupidly powerful in a straight line but more than a little flummoxed by corners, because it’s hard to inspire confidence with inert steering and a kerb weight nigh-on two tonnes.

For all its dynamic shortcomings, and its perverse price tag (we’re thinking at least $600,000 when it arrives at year end, which will be inflated even more should one option such toys as carbon-ceramic brakes, LED headlights and various carbon fibre bits), the RS6 is still hugely desirable.

It’s difficult to rationalise purchasing an estate with the potential to leave all but the most hardcore supercars a rapidly disappearing speck in its rear view mirror, and crucially, one that costs almost as much. Paradoxically enough, that might be the crux of the RS6’s appeal. And that might be the most perverse thing of all.