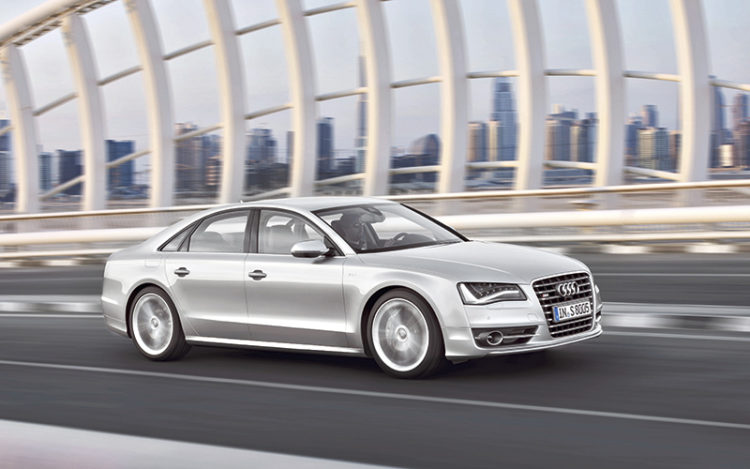 When the current A8 was launched in late 2010, my first thought was that it looks like an overgrown A4. I was a little disappointed that Audi’s top-of-the-line saloon would look so generically Audi, with sheer size rather than clever details setting it apart from its lesser siblings. But I have to admit that the styling of the A8 has grown on me since then. Its dimensions and elegance give it a definite presence.

With the arrival of the S8, I couldn’t help thinking this is the sort of design impact the A8 should have had from the start. Transforming the limousine into an automotive Jennifer Lopez (in a sexy evening gown) are a double eight-bar grille, polished alloy-look door mirror housings, a rear diffuser insert with two-layer aluminium finish, two pairs of huge exhaust tailpipes and a set of striking 21-inch wheels (upsized from standard 20-inch and with optional carbon-ceramic brakes). 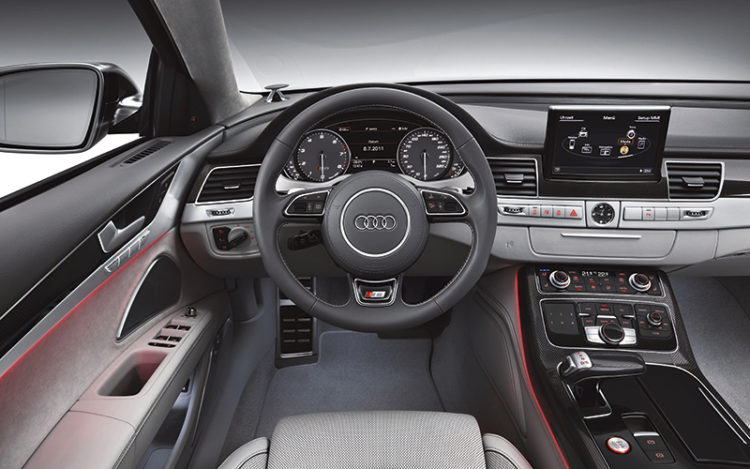 Sporty trim, shapely seats, advanced amenities and indulgent luxuries are all inside this cabin.

These exterior delights are complemented by an interior befitting a luxury sports saloon – “exclusive” seat upholstery in quilted Lunar Silver, gorgeous Carbon Atlas inlays for the instrument panel and Tiptronic lever, and Audi S-style grey dials. This is truly a premium German four-door, but the omission of a sunroof (it’s a $1860 option) is surprising.

The multi-function 9-inch screen offers state-of-the-art Navigation Plus and intuitive MMI Touch operation. The default stereo is a 14-speaker surround sound Bose, but the technopreneur might as well go all the way and specify the extravagant Bang & Olufsen hi-fi with 19 loudspeakers, a 1,400-watt amplifier and a price tag of $24k. 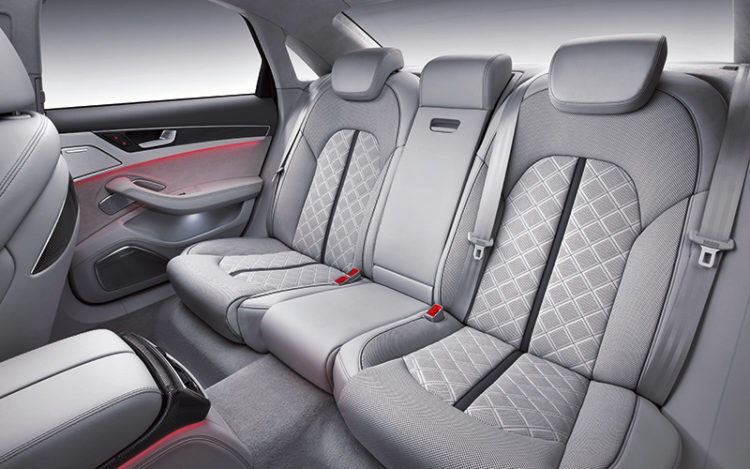 On the go, the S8 is not just fast – it is seriously fast. In fact, it’s fast enough to match many an exoticar. Key to this storming performance is Audi’s superb new 4-litre twin-turbocharged V8, which delivers an astounding 520bhp and 650Nm to all four wheels. This output catapults the S8 from rest to 100km/h in just 4.2 seconds – same as BMW’s mighty M6 Coupe, and even quicker than the BMW 760Li and the Mercedes S63 AMG. Incidentally, either of the two 544bhp flagships cost a cool $100,000 more than the S8. 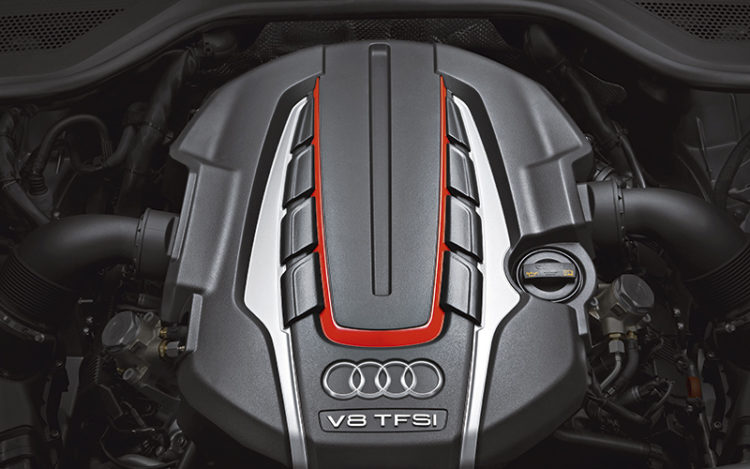 This high-tech twin-turbo V8 can operate as a temporary “V4” to save petrol.

Besides out-and-out performance, the S8 also boasts outstanding fuel efficiency for a car of its calibre. At almost 10 kilometres per litre, it’s nearly 25 per cent less thirsty than the previous V10-powered S8. The magic trick here is “cylinder on demand” technology. Under partial load, four of the eight cylinders are deactivated, in effect converting the V8 to a “V4”. Cruising on our expressway at the posted speed limit, the S8 runs on only four cylinders. Accelerate hard and all the pistons are firing again to give the car instant acceleration. A package of measures, including Active Noise Control and vibration-dampening active engine mounts, ensure that the V8 always sounds like one even when it’s temporarily four cylinders “short”. The transition between the two operating modes is seamless, too. 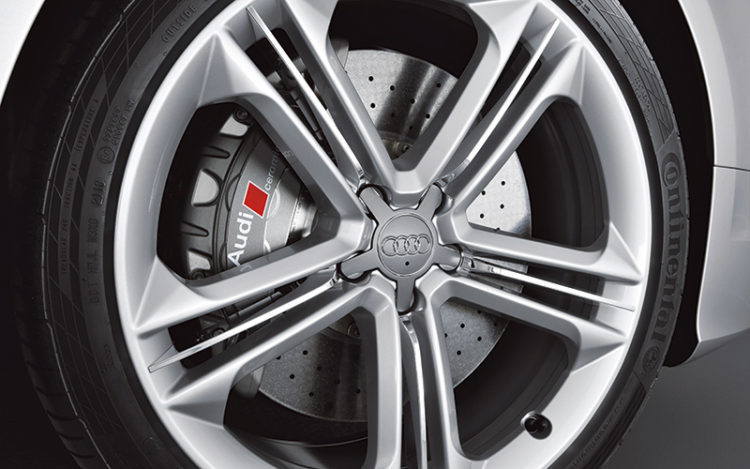 The 8-speed automatic transmission uses tall ratios and low revs whenever possible to maximise fuel savings. When called upon, the downshifts are rapid and jerk-free. In Sport mode, the gearchange times match those of high-performance sports cars.

While the A8 has always been respected for its fine handling, the S8 is on a different level altogether. The sublime, specially tuned adaptive air suspension offers variable damping plus a choice of three ride heights. The drive select programme proffers five different modes – Comfort, Auto, Dynamic, Individual and Efficiency. 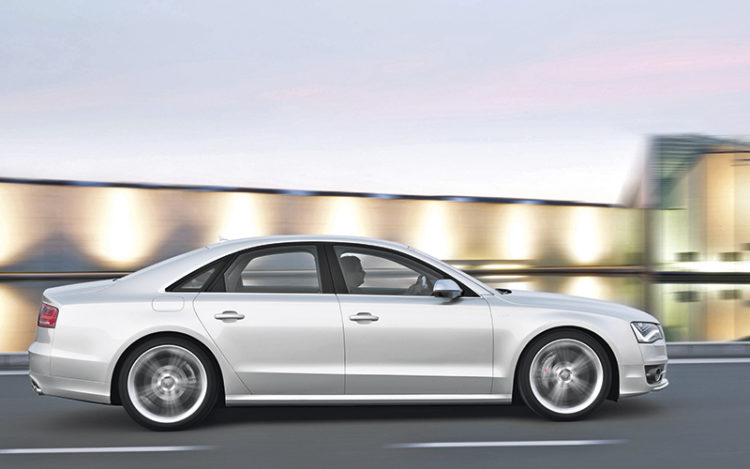 The best way to sum up the brilliant chassis is to say the S8 handles remarkably well even in Comfort mode, while the ride is never harsh in Dynamic mode. The rear sport differential, fitted as standard, feeds extra power to the outside wheel during hard cornering, thus minimising understeer. This gives the S8 an even more agile feel.

Contributing to this sense of agility is the car’s relatively low weight. Despite measuring over five metres long and almost two metres wide, and equipped with loads of equipment and luxurious fittings, the S8 weighs a reasonable 1975kg, thanks to a body made almost entirely out of aluminium (apart from the B-pillars which use ultra high-strength steel). Among the S8’s obvious competitors, only the aluminium-bodied Jaguar XJ 5.0 Supersport is lighter at just over 1.9 tonnes. 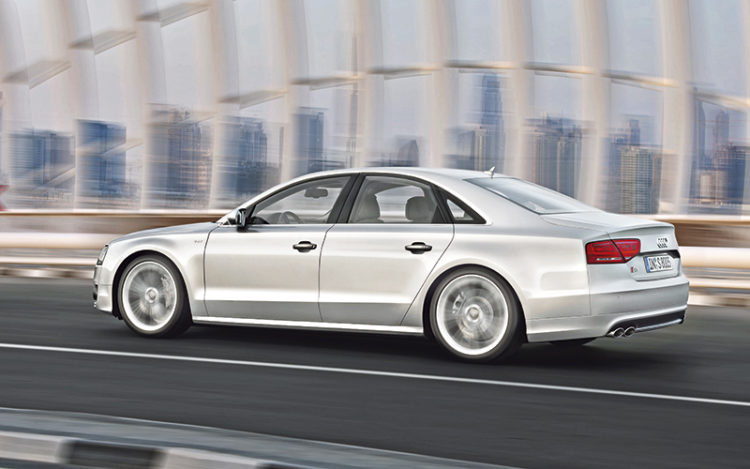 For the well-heeled in the market for a $500k+ deluxe express, the S8 would rank as one of the top contenders. Classy, comfy and devastatingly quick, this superlative limo has precious few peers.