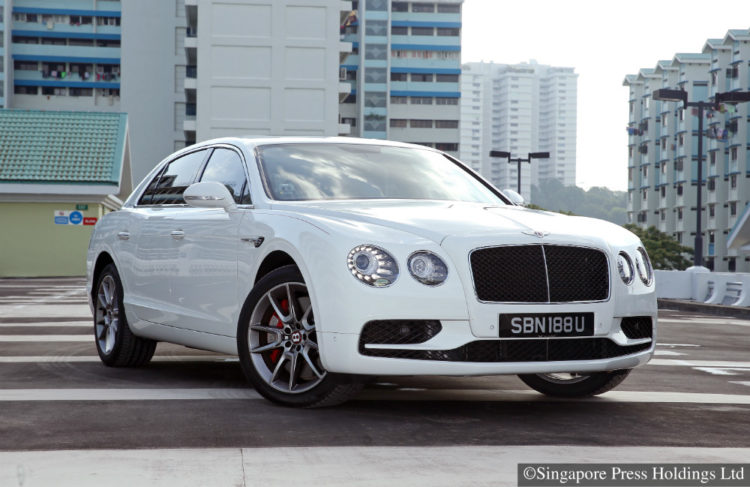 Bentley’s forte has long been in making plus-size cars that drive like a dream. Its Flying Spur V8S is yet another testimony of that capability.

To the uninitiated, the car might come across as somewhat fuddy-duddy, with plain old-school styling, especially in its cockpit.

There is plenty of chrome, wood and leather, presented in an inimitable lip-stiffening fashion.

Those circular nautical-type air-con vents, for one, are not exactly easy to adjust. But, oh, do they look grand, like the rest of the 5.3m by 2m limo.

But once you get behind the wheel, you notice at once how everything fits as snugly as a well-crafted modern sports car.

Fire up the engine and the promise of performance fills the air. You hear the V8’s burbling percussion, but you do not feel a trace of it on your fingertips, nor anywhere else on your body.

The luxurious Flying Spur is insulated like a vault and the fact that you can make out its engine notes is an engineering wonder. Because everything else outside is muted.

Driving this juggernaut is not as daunting as you would imagine.

Behind the wheel, the car’s size is not obvious, thanks to superb visibility, thoughtful ergonomics and a well-judged helm.

Steering response is exquisite, allowing you to negotiate paint-stripping carpark ramps and other murderously tight spots with impunity.

The all-wheel-drive Bentley never puts a foot wrong and stays its course even if you are carrying a little too much speed into a corner, or the contours of the tarmac change midway in a turn. 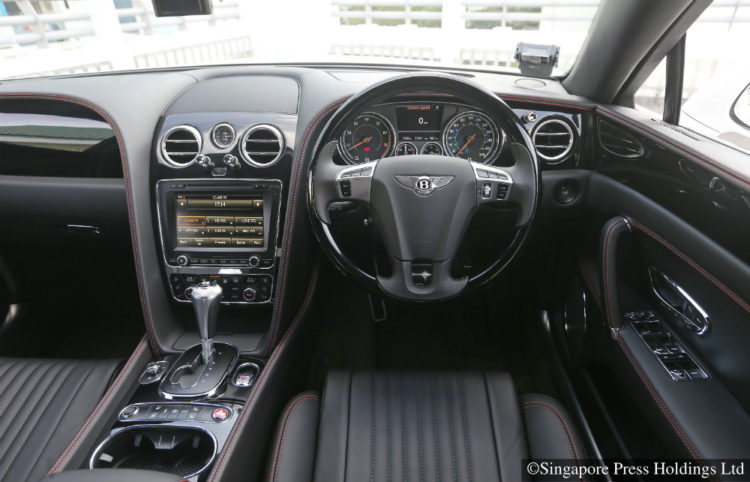 Its ability to keep an even keel comes with no compromise to ride comfort.

Its adaptive air-suspension system, which Bentley says is more sports-focused than the Flying Spur V8’s, irons out all but the nastiest bumps on the road.

The one thing that makes the V8S stand out from the V8 is under the car’s immense bonnet.

It is the same twin-turbocharged 4-litre 8-cylinder block as in the Flying Spur V8, but is tuned to produce 21bhp and 20Nm more.

The increased output of 521bhp and 680Nm arrive at the same engine speeds of 6000rpm and 1700rpm respectively.

Because there is more shove at the same low revs, the V8S feels more effortless (not that the V8 was sluggish at all) in everyday situations.

And since you hardly ever need to rev to 6000rpm, the car’s computed fuel consumption is unchanged from the V8’s.

They are insane figures for a vehicle weighing in excess of 2.4 tonnes. In fact, the V8S is so adequate across such a wide rev band that its oversized shift paddles are redundant.

The paddles are also a tad incongruous in a cabin which exudes fine craftsmanship and conservative ambience. They are like lava lamps in the bed chambers of a Victorian mansion.

The other thing that is incongruous is the car’s navigation system. It has perhaps the most rudimentary graphics available in any car here.

It is so poorly done that you might not want to turn to it even if you are lost.

Thankfully, getting lost in a car like the Flying Spur V8S is less painful than in many other cars.