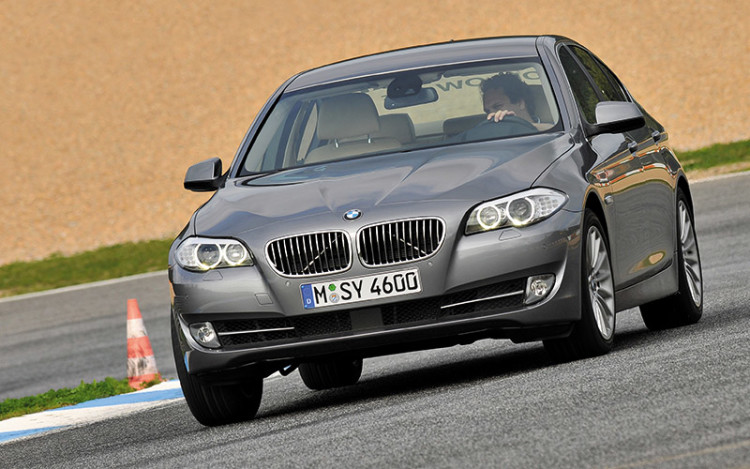 BMW has been something of a niche-master of late; inventing new models that satisfy demand that no one knew existed. At this point, the relevancy of something like the 5 GT may be obscure to some, but the point of the 5 Series, which is a staple model in the BMW line-up, is clear to all.

Stating the obvious, the 5 Series is basically BMW’s answer to the Mercedes-Benz E-Class. Playing the game of tit for tat, as the two marques have been doing for 23 years, Mercedes launched the new E-Class (W212) last year, so BMW hatches its new 5 Series. 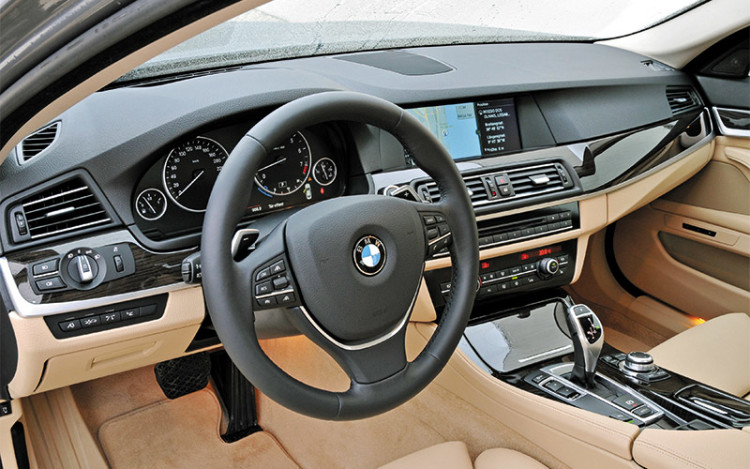 A race track does not feature on the designated test route for the E-Class, but it certainly does for the 5 Series. This is not a failing on Mercedes’ part, but reveals an emphasis that BMW is making.

The Estoril Autodrome is the final destination after an extensively long driving course that starts somewhere in Cascais, west of the capital of Portugal.

Up till 1996, the track was on the F1 calendar, but it has since been modified to host MotoGP races. Interpreting that nugget of knowledge, a twisty circuit optimised for Valentino Rossi and his ilk to scrape their kneepads on will certainly trouble a luxury road car. 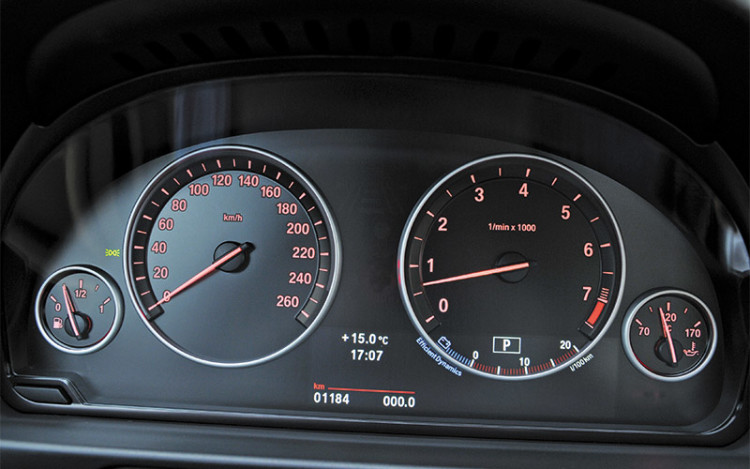 To further tip against the car’s favour, the new 5 Series sedan codenamed F10 (BMW has ditched the old nomenclature that starts with E) is big. Its wheelbase is some 80mm longer than its predecessor’s and just 22mm less than the previous 7 Series.

While the cabin is correspondingly bigger, it hasn’t grown by quite the same magnitude. Knee room for rear passengers has increased by just 13mm. Then again, the old 5 Series wasn’t exactly cramped to begin with, so the gains are welcomed but not a dire necessity. 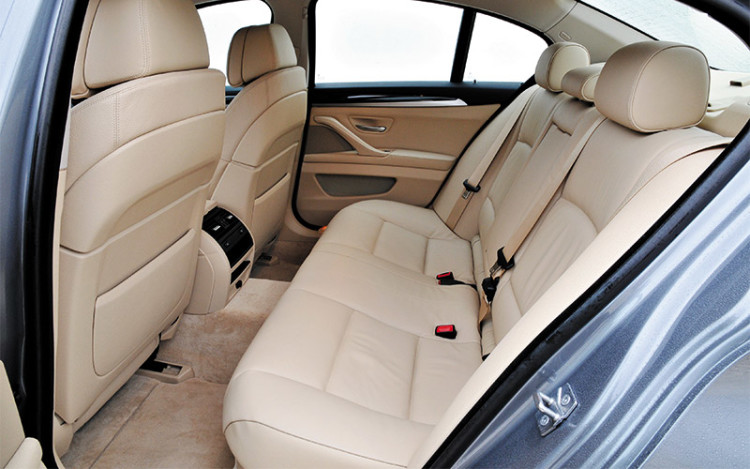 New cabin is roomier than before, with its amenities and qualities closer than ever to the 7 Series.

What this all means is that the new 5 Series’ cabin is set further behind than in the old car. The overall proportion reveals a more coupe-like silhouette, which is nice.

The car’s best angle, though, has to be from the rear, where the tapered lamp clusters help exaggerate the flare of the wheel arches (they echo the strong hunches at the front). Combined, the cues broadcast the 5 Series’ sporty rear-wheel drive underpinnings and it’s definitely handsome, even if there are murmurs of BMWs looking a bit bland in the post-Bangle era.

Part of the reason why the cabin doesn’t “feel” much bigger has to do with its styling. The furnishing seems to have put on serious girth and visual weight, taking cues from the current 7 Series. Besides feeling more robust and tactile, the more formal design gives the 5 Series a greater sense of “class” in contrast to the minimalist (read: sparse) approach on the old model. 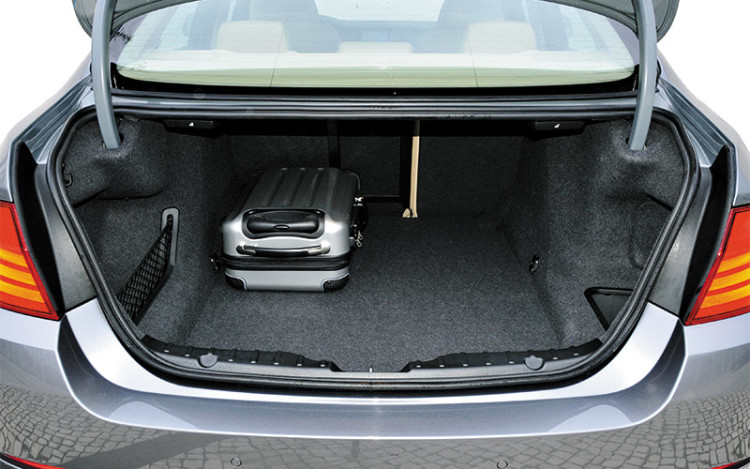 Luggage compartment unchanged in capacity, but the layout is more cargo-friendly.

BMW spoke at length to detail how light the body is (23kg less than if they were to bang the whole thing out of steel), but the front end is not made from aluminium like the E60. The lighter material is now restricted to the doors, bonnet and fenders. Considering the increased dimensions and reduced reliance on aluminium, the average 10kg gain over the old car is still commendable. The new steel body is comparatively stronger too – 55 percent stiffer than the smaller E60 shell.

One of the main benefits of a platform that’s high in rigidity, on top of the obvious safety benefits in a crash, is how it makes it easier to set up a car’s dynamics.

Lesser chassis flopping means that the suspension can be more acutely tuned to respond to the driver and road, whether it’s to make it ride more comfortably or to handle more sharply.

We can’t be absolutely sure about the standard car. The 535i tested came fitted with the 18-inch run-flat tyres (instead of 225/55 R17) and adjustable dampers, among other cost options. The ride is almost supple, so finally, when the suspension is set to “Comfort”, it actually is.

The suspension forms part of the Adaptive Drive option, which  also incorporates Integral Active Steering that debuted on the current 7 Series. 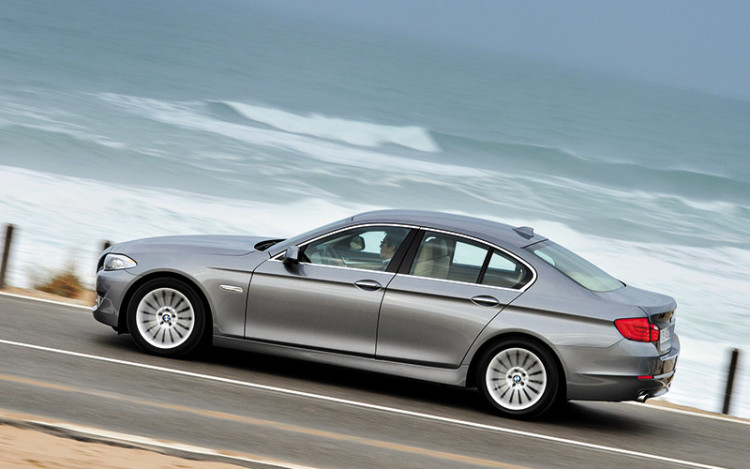 On top of varying the steering rack ratio, the system also actively manipulates the angle of the rear tyres by up to 2.5 degrees – in the same direction to increase high-speed stability during lane change, or pointing it in the opposite way to increase the steering effect, dramatically increasing the car’s agility.

Google Maps say that the Estoril track should be less than 20 minutes away from the hotel, but the test route plotted on the car’s navigation system is an adventure that takes nearly two hours to complete. It covers a suite of driving conditions, including some of the most winding stretches of tarmac that Portugal has to offer. Narrow lanes that connect the quaint little towns give Integral Active Steer plenty of opportunity to prove its mettle.

The car largely delivers. Even on the really twisty bits, where the road seems to coil back to itself like a hairpin, you rarely need to cross your arms over the steering to plot the 5 Series through. On the faster bends, the car has an uncannily flat stance as the active dampers dial out excessive body movement.

This being a BMW, “535i” doesn’t mean that there’s a 3.5-litre engine under its bonnet. Instead, it’s a turbocharged 3-litre. While output is similar to the twin-turbo lump in the 335i, this engine is fed by a single turbocharger, featuring what’s called a twin-scroll design instead of two conventional ones. It also incorporates direct injection and Valvetronic (which is able to infinitely vary intake valve lift and does away with the conventional throttle butterfly). 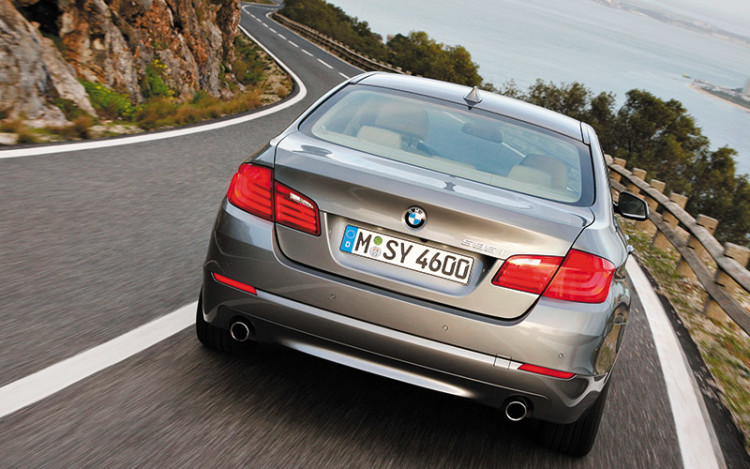 This is said to be the first engine to feature this combo of techno-garble. Power delivery is so linear that it doesn’t feel like a turbocharged engine, even if the torque is immensely strong as only forced induction can provide. Paired to the 8-speed automatic gearbox first seen on the 760Li and 7 ActiveHybrid, the 535i is highly responsive without even trying and virtually explosive when needed.

Almost to reinforce the point, the 535i is equipped with (optional) shift paddles. Yes, that’s shift paddles in the usual left for downshift, right for upshift format like the M cars. It’s a whole lot easier to master than the push-pull “triggers” that BMW has insisted to use on the regular models.

By the time the navigation led the car to the Estoril Autodrome, it was drizzling and the track was wet. This puts a cap on how keenly one can push the 535i, but it doesn’t dampen the car’s enthusiasm to be flogged.

At some points, as you brake earlier to tackle a potentially slippery corner with caution, the gearbox doesn’t allow downshifts quite as immediately as a more overtly sporty car would. The engine, which feels and sounds great on the winding roads, starts to feel flat and sound boomy as it stretches past 6000rpm (you rarely need so many revs, actually). Good then that the autobox has so many ratios to help keep the engine spinning happily in its sweet spot. Even with the reduced traction, the car has a delicious readiness to switch directions on command. Locating the engine as far into the cabin as BMW did obviously helps as it means less weight over the front axle to corrupt steering alacrity, but the agility attributed to the Integral Active Steer makes the car’s uncanny ability seem, well, uncanny.

Of course, the controls are still a bit on the softer side, while the brakes and tyres probably won’t hold up quite as well if driven at full pelt on a dry track. But overall, the 535i feels more capable tackling the 13 turns of the Autodrome than a non-M car has any right to. Remember that the car is meant as an executive express like the E-Class.