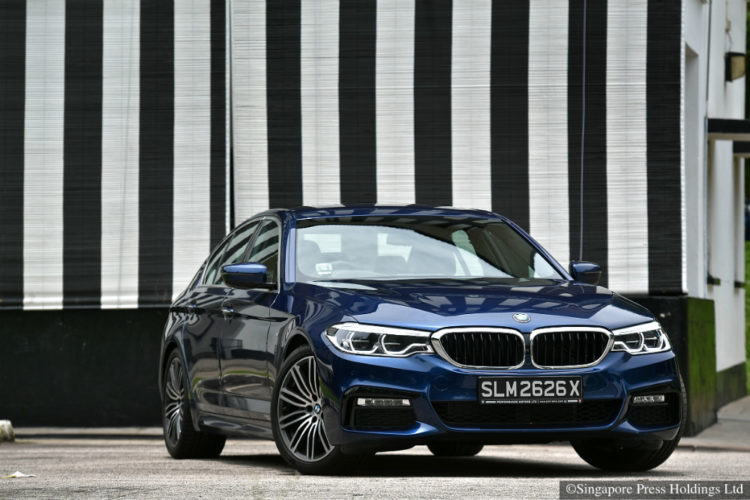 The BMW 530i’s steering is effortlessly responsive and its chassis reacts to changes in terrain and dynamic forces with finesse.

Is it possible for a smaller-engined car to feel sportier than a bigger-engined sibling?

But in day-to-day commutes, the 530i feels breezier and sharper in its throttle response. It is hard to explain this anomaly, except to attribute the test car’s uncommon verve to how the previous driver or drivers had been driving it.

If they had been especially enthusiastic, the car would have “learnt” that as the preferred pattern and respond accordingly.

Other than that, the only other possible reason is that the 530i weighs a little less than the 540i. This will not show up in a century sprint, where the full potential of the engine is brought to bear.

But when a car starts off from the lights or accelerates to fill a gap in traffic, the ease in which it overcomes inertia can be correlated to its weight.

The way the 530i moves is quite a surprise – a pleasant one. It is light-footed and ever ready to pick up the pace.

In absolute terms, its peak torque value of 350Nm is more than generous. And its 6.2-second century sprint timing is nothing to sniff at. (It is, in fact, quicker than the Volkswagen Golf GTI.)

It is also endowed with the 5 Series’ impeccable road manners. The car is immensely tractable, with a steering that is effortlessly responsive and a chassis that reacts to changes in terrain and dynamic forces with finesse.

Its steel spring suspension has a sporty edge and yet affords a pliant response to speed humps and tarmac blemishes.

Its demeanour encourages you to drive like you were 10 years younger.

And, more often than not, you are richly rewarded. Even a mundane task such as turning into a side lane is executed with flourish.

The 530i is not without pampering features, though. Standard issue equipment include doors with auto soft-closing function, an instrument panel with gesture control, a motorised tailgate and BMW’s phone-size display key (which does not come with a remote parking function).

But it gets a two-zone climate control instead of the 540i’s four-zone system. Its steering is not leather- clad like its sibling’s, and the head-up display, glass roof and Harman Kardon hi-fi are not standard.

There are some differences in interior and exterior trim as well.

But these exclusions matter less when a car drives as well as the 530i.