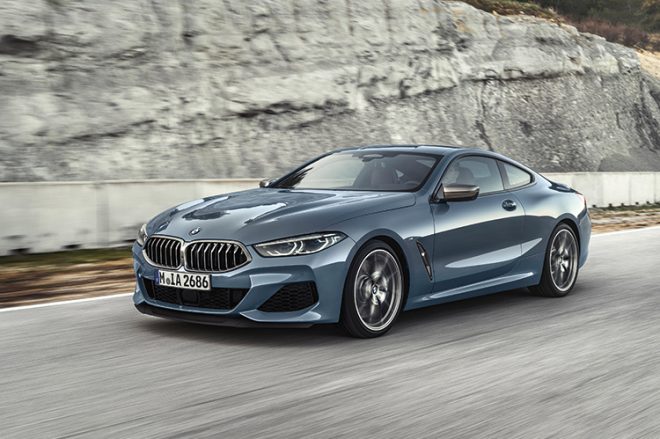 The previous BMW 8 Series breathed its last breath in 1999. After two decades, it has returned.

During its 20-year absence, the gran turismo (GT) badge of honour was passed to the second generation E63/E64 6 Series model that was produced between 2003 and 2010.

Now that the fourth-generation 6 Series has morphed into a large fastback, the GT baton has been passed back to the new 8 Series, codenamed G15.

The 8 Series looks like a bigger and more muscular 4 Series Coupe. But it is more streamlined, and cuts a sleeker and sportier profile than its smaller sibling.

Its front headlamps are the slimmest in the BMW family. The signature kidney grille has been re-interpreted and refreshed.

The 8 Series roofline is contoured like a “double bubble”, as seen in some classic cars. At the rear, a pair of trapezoid tailpipes and non-functional air ducts take centre stage.

Overall, the second-generation 8 Series looks more like a muscle car than the svelte third-generation 6 Series. With more presence and purpose, it provides the base for the M8 take on the aggressive-looking AMGs when it is launched.

Inside, the dashboard resembles the ones in the latest X5 and 3 Series models, albeit with subtle differences. 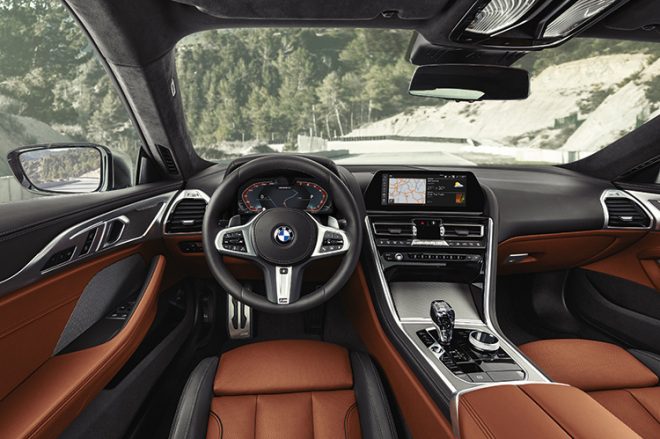 8 Series cockpit is definitely high-tech, but needs to feel more special considering the model’s position in the lineup.

This is a shame given the 8 Series standing in the family hierarchy – a grand tourer should have a grand dashboard. However, this is a deliberate move as BMW wanted a minimalist design.

The front and rear seats are upholstered in BMW’s premium Merino leather as standard. The rear seat backrests can be folded to expand the 420-litre boot’s capacity.

There are two variants of the 8 Series for now: the M850i xDrive and the 840d xDrive (the latter will not be sold in Singapore). Though the M8 is still in the making, the M850i does not disappoint in the interim.

The 4395cc V8 with two twin-scroll turbochargers is not a new engine, but it has been updated. The crankcase is new and torsional vibration is reduced with the employment of a viscous damper on the crankshaft.

With several other revised parts, the powerplant did not put on any weight.

The revamped V8 roars to life with the characteristic rumble at the push of the start/stop button located next to the gear lever – a first in a BMW. The latter is topped by a crystal knob, which should please Feng Shui believers if it is actually sited at the right spot and angle. 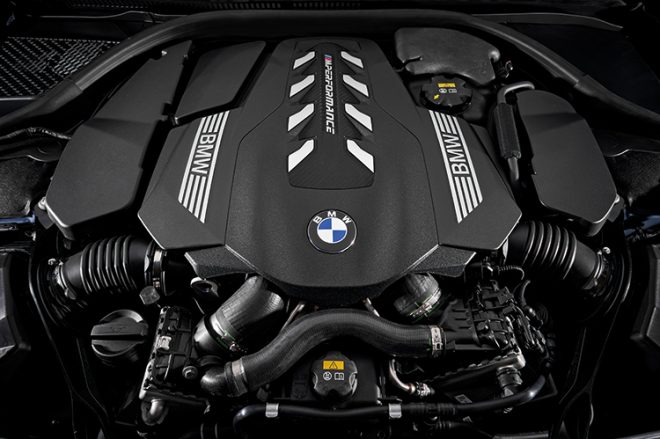 Turbocharged 4.4-litre V8 is likely to have a big appetite for high-octane unleaded.

The engine’s output is transmitted through BMW’s now ubiquitous 8-speed automatic gearbox. A new transmission controller has given it an improved gear ratio spread.

In Sport+ mode, the V8’s baritone voice is accompanied by pops and crackles as the gearbox downshifts when braking from high speeds.

I suspect the soundtrack is amplified by synthesisers, which are common these days. But unlike a 4-cylinder engine, a V8 motor doesn’t require these things.

Just like the M5, the M850i has all-wheel-drive. The torque split between the front and rear axles are continuously variable, so that the system can better respond to various road and driving conditions.

The xDrive system has a rear axle bias, though. Unless extra traction is required, only the rear wheels are driven. 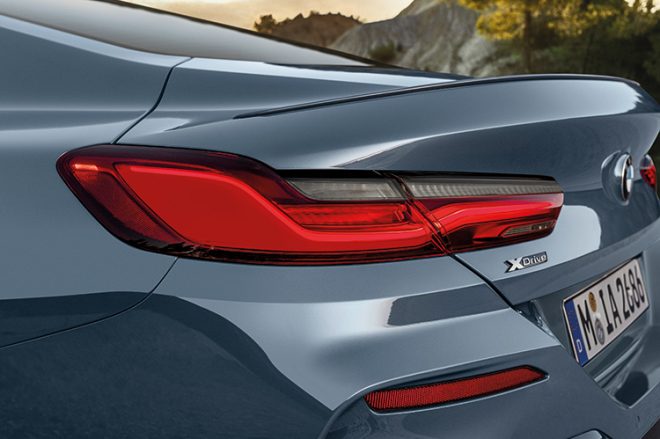 The standard Integral Active Steering (rear-wheel-steering) reduces the car’s turning circle at low speeds because the rear wheels are steered in the opposite direction to the front wheels at up to 72km/h.

It does not feel unnatural or unnerving, and I think all cars should have it to make parking easier, especially for the parking inept.

Steering feel, though a tad light, is thankfully uniform and communicative, which made it easier to hurl the coupe along the snaking mountain roads of Colares.
The 1890kg coupe responds swiftly and nimbly to inputs with little body roll.

Enhancing the coupe’s handling are the 20-inch Bridgestone Potenza S007 tyres that were specially developed for it.

The car’s brake discs, which at 395mm are bigger than dinner plates, peer out from behind each of the wheels.

Yes, for the first time in a BMW, the rear brake discs are the same size as the front discs. They held up well with no fade and did not protest during my five laps around the Estoril racetrack.

Indeed, I must say that the M850i handles better and has more composure than an Aston Martin DB11 V8. 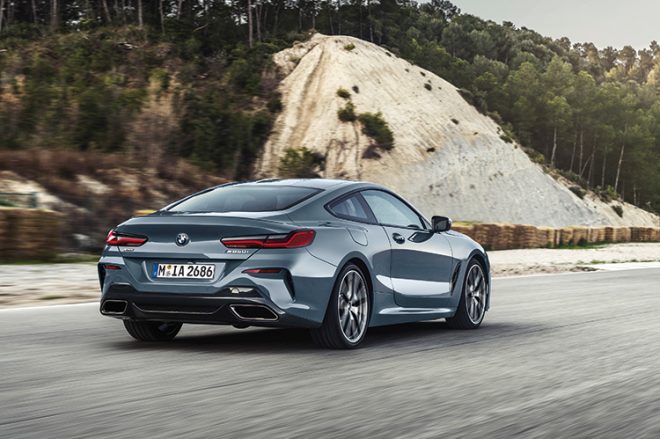 The well-sorted suspension, all-wheel-drive and rear-wheel-steering give this sizeable GT a surprising nimbleness.

But to be fair, the DB11 does not have all-wheel-drive and the badge-conscious would say that I am comparing apples and oranges.

Despite its considerable girth and weight, putting the M850i in Sport+ mode makes it a doddle to slam through the tight single lanes and dual carriageways typically found in suburban Europe.

The car’s adaptive suspension electronically adjusts the compression and rebound of each of the four dampers continuously to maintain your cornering lines. Nothing seems to faze it.

The cabin has superlative refinement. It feels like there is double the soundproofing that is ordinarily applied in premium cars.

The only downside is that your wife’s nagging from the passenger seat will be more distinct in the absence of NVH (noise, vibration and harshness). 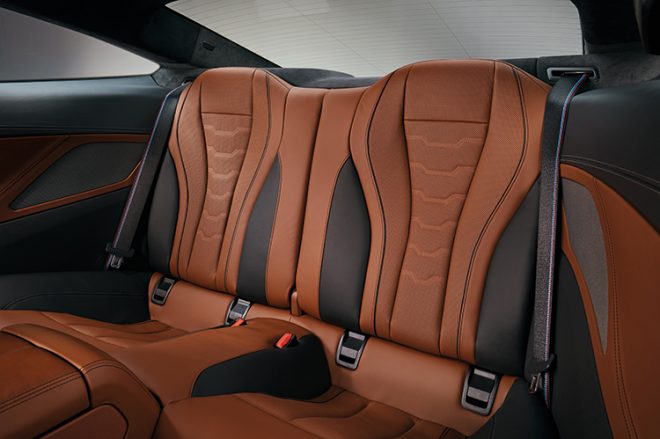 The M850i is as close as you can get to something that’s both a sports car and a grand tourer (the M8 will probably be both).

It should therefore be able to keep up with “base” Porsche 911s on Sunday morning breakfast drives along the back roads of Johor. But even if it doesn’t, it shouldn’t be too far behind.

This year, a convertible and a four-door Gran Coupe will spawn and expand the 8 Series to three variants.

When the M version arrives for the Coupe, Convertible and Gran Coupe, the crown could well be on the head of the 8 Series.

I suspect that this model will probably command Aston Martin-like prices.