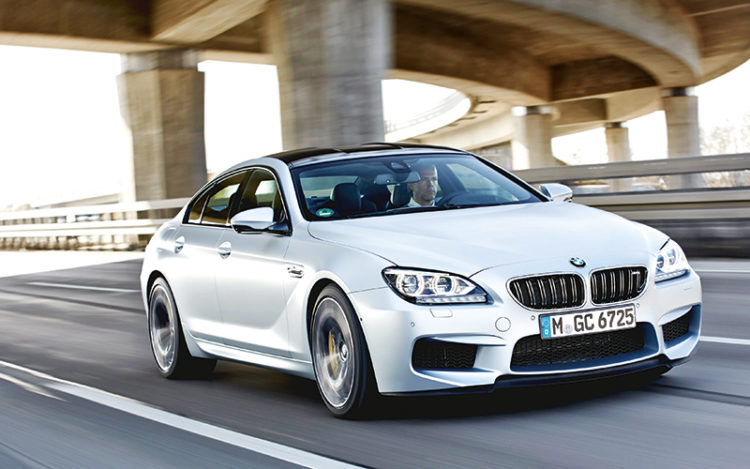 The M6 Gran Coupe demolishes the century sprint even more quickly than the mighty M5.

What happens when you combine the practicality of the M5 with the beauty of its sportier two-door sibling, the M6? The result is the new M6 Gran Coupe – a high-performance four-door coupe described by BMW as M-car motoring at its most exclusive.

Resembling a regular 6 Series Gran Coupe put on styling steroids, the M6 GC sports enough M design elements to distinguish it from the rest of the range – flared wheel arches, gaping air intakes, aerodynamically sculpted side sills, two pairs of exhaust tailpipes and, exclusive to this model, 20-inch double-spoked M light alloy wheels (the standard wheels on the M5 and M6 coupe are 19-inch) and a bespoke M kidney grille. 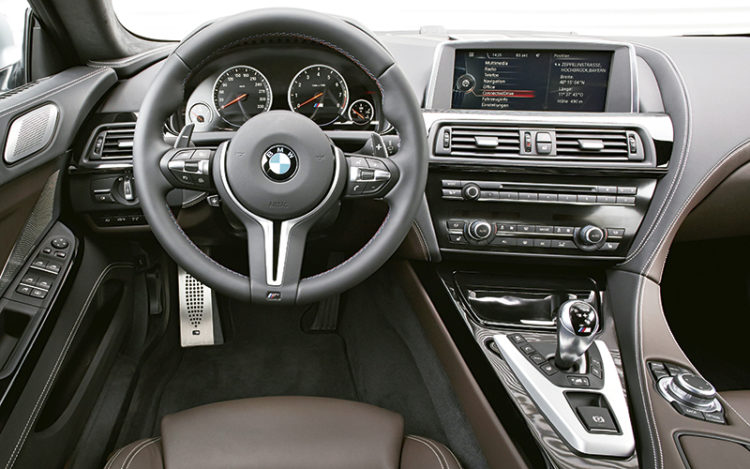 More special than the M5 cockpit, but also less spacious.

That’s not all. Carbon fibre has been employed for the roof to lower the car’s centre of gravity, and like on the M6 coupe, it features what BMW calls a “dynamic recess” in the centre of the roof – in layman terms, it’s there purely for aesthetics. It’s easy for passers-by to admire, considering the vehicle’s low height, while shorter people can look to the rear diffuser panel, which is also made from carbon fibre.

And admire this Bimmer they will. The M6 GC’s roofline is lower and more stylishly sloped than that of the M5, while the 113mm longer wheelbase and extra 120mm in body length over a M6 coupe “stretch” the silhouette’s elegance. The 6 Series Gran Coupe is already very attractive, but festooned with design-and-engineering goodies from the M division, it looks even better. This is arguably the prettiest saloon to have come out of Munich in a long time. 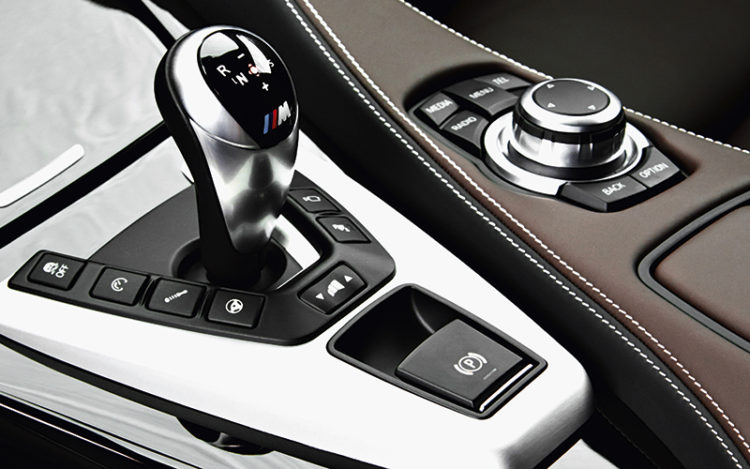 Control cluster around the gear knob lets you modify the motoring magic of the M6.

The cabin drips with poshness and high-quality materials. Thankfully, the cockpit layout is shared with the M6 rather than the M5 (whose interior is starting to look a little dated), which means you get the same lavish dash that sweeps from the passenger side to join up with the centre console – very dramatic, very nice.

The extra features not found in the 650i Gran Coupe include Merino leather everywhere, M-spec sport seats and steering wheel, and anthracite-coloured Alcantara rooflining which, for good measure, is referenced stylistically to the recess “overhead”. As a whole, the cabin’s aesthetics and trim quality surpass even that of the flagship 7 Series. Driver and passengers alike are guaranteed a sense of occasion every time they step foot inside.

But has the luxurious route taken by the M6 GC compromised the M brand’s “motorsport” reputation? Fortunately, no. This saloon still packs the incredible driveability of the M5 and M6, albeit with subtle differences.

While the M6 GC shares the same fearsome 4.4-litre, twin-turbo V-8 powerplant as its M siblings, the steering, throttle maps and Dynamic Stability Control (DSC) have been tweaked. Also revised are the damper settings in Comfort mode, which promises a plusher ride compared to the M5. 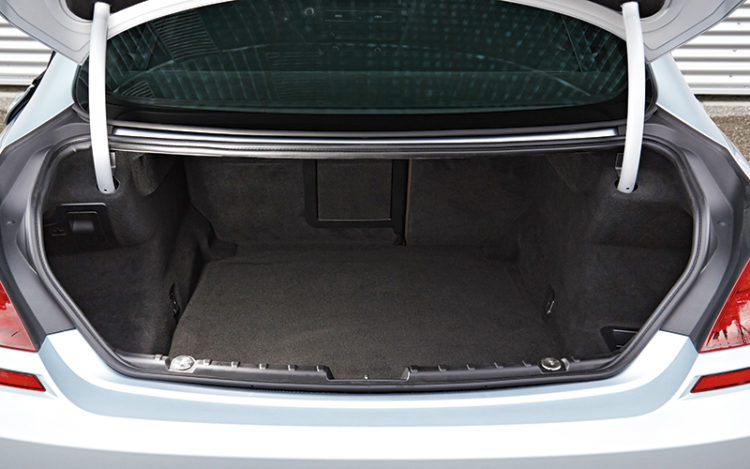 The end result is a capable machine that slots perfectly between the touring-oriented M5 and the single-minded, track-ready M6. The wheelbase is identical to the M5’s, but because the M6 GC’s centre of gravity is lower (thanks mostly to the carbon roof and partly to the “dropped” driving position), it handles and steers a little more sweetly than the M5, without being as tense on tarmac as the M6.

It’s not all perfect, though. Visibility from behind the wheel is an issue, particularly when placing the car on a narrow German dual-carriageway. The rakish A-pillars, swooping bonnet and nearly 1.9m width combine to make me flinch a little whenever another vehicle comes the other way at speed.

Not helping the situation is the car’s steering system. While nicely weighted and responsive, it can feel rather remote when tackling tighter, curvier sections of tarmac. That being said, it’s still an improvement over the M5’s seemingly “detached” steering feel. Show the M6 GC a wide, flowing road and it sweeps from corner to corner with astounding speed and composure that ignore the almost 1.9-tonne kerb weight. 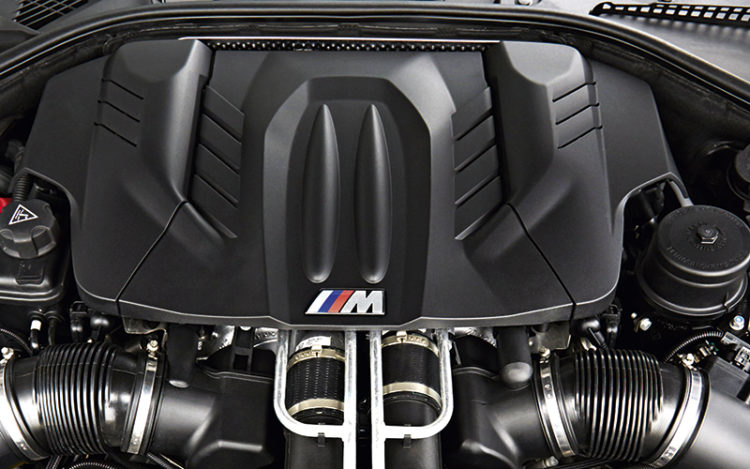 Like its M siblings, the M6 GC has three drive modes for the driver to choose from, depending on his level of skill/bravery – Comfort, Sport and Sport Plus. Each comes with its own settings for engine eagerness, gearchange ferocity, suspension firmness, steering responsiveness and DSC “self control”, with the option to customise all these presets to your liking.

I personally favour leaving everything in “max”, except for the ride, whose Comfort mode is best suited to the demands of German back roads. Set to Comfort, the suspension is noticeably more compliant than the M5’s in the same mode, yet the M6 GC can still give an involving drive without the need to switch to the stiffer, more uncomfortable Sport or Sport Plus setting. 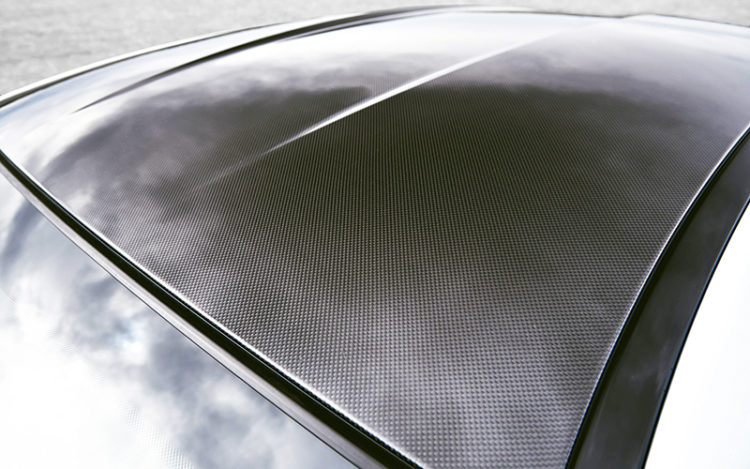 Light, stiff carbon fibre has been used for the roof; it’s mere steel on the M5.

The M5/M6’s 4.4-litre turbocharged V8 engine continues to be an absolute treat. Devastatingly potent, it produces a hearty 560bhp and a meaty 680Nm (from just 1500rpm), ensuring that your neck muscles get a thorough workout whenever the throttle is depressed. The M6 GC weighs 5kg more than the M5, but manages to be 0.2 of a second faster to 100km/h (4.2sec versus 4.4sec). Press on and it can reach an “I’ll see you in prison” top speed of just over 300km/h.

The 7-speed M DCT (Double Clutch Transmission) is nothing short of amazing, especially in Sport Plus mode, whose lightning-quick gearchanges are punctuated by a jolting thump every time you flick the right shift lever behind the wheel. Enhancing the arcade-like experience is a deep, throaty roar from the V8 motor after 5000rpm and short, urgent blips of throttle rumble each time you downshift manually.

The test car was fitted with the optional carbon-ceramic brakes, which are noticeably stronger than the standard steel brakes and work well even when cold. But I suggest saving the money and sticking to the original stoppers, which are more than sufficient for day-to-day driving and the occasional racetrack session. 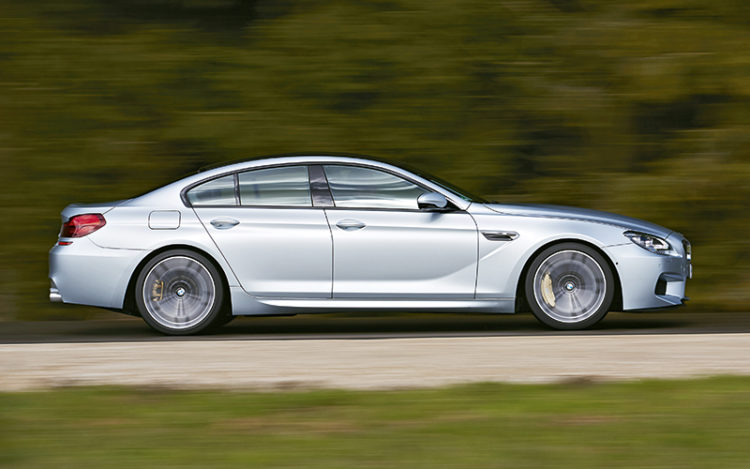 In the back, the M6 GC can seat two passengers in relative comfort, although a M5 provides far more space for heads and legs. Using my sophisticated thumb-and-index finger technique, I measured roughly 7.6cm between my scalp and the ceiling when seated upright (I’m 181cm tall), while the legroom is only marginally more than in a 3 Series. The 460-litre boot space is 60 litres smaller than the M5, but if needed, the back-rests can be folded down in a 40:60 ratio to increase cargo capacity to an ample 1265 litres.

So, why would anyone choose the M6 Gran Coupe over the roomier, more practical and more cost-effective M5? Well, the newcomer looks much prettier, boasts even better dynamics and offers a level of refined luxury that the M5 cannot match. 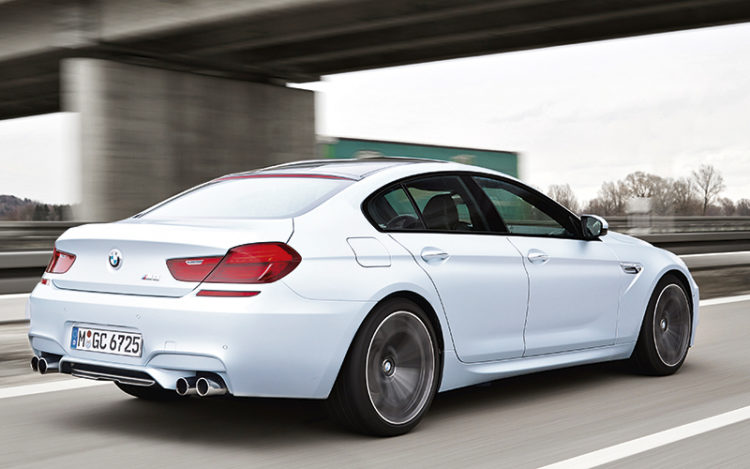