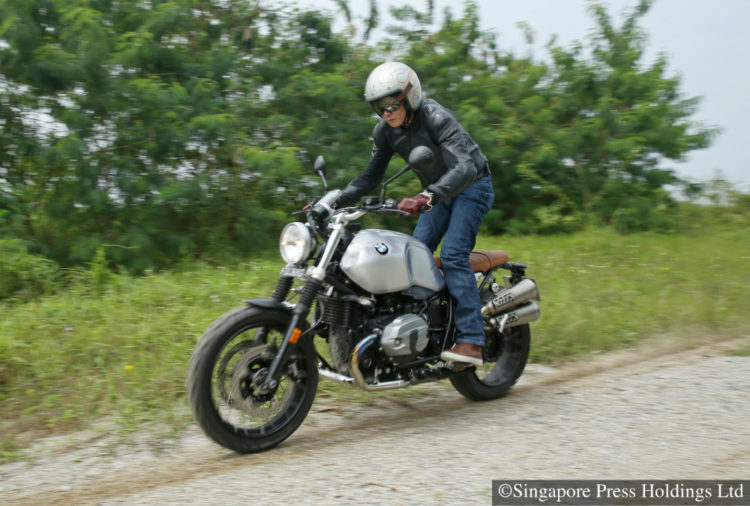 The new BMW R nineT Scrambler has retro good looks and a robust engine. It can take you places, from winding roads to even the occasional rough terrain, if you can bear the thought of getting dirt on this beauty.

There are two versions available here – one with road tyres and the other with semi off-road tyres.

The latter looks more rugged while retaining a classic appeal. Tan mock-leather seat, wire-spoked wheels and beautiful weld marks running down the spine of its aluminium fuel tank make this Scrambler an ideal stunt bike for any Mad Max movie.

The former is dapper too, but more low-key. It comes in a matte grey fuel tank and mag wheels.

The other difference between the two is ride height. At 820mm, the semi-offroad version is a tad taller.

The Scrambler is the first of BMW’s “Heritage” bikes harking back to the 1970s. These include the R nineT GS and R nineT Racer, which have not arrived in Singapore.

Like all the bikes in this lifestyle range, the Scrambler has a powerful engine in the form of an air- cooled 1170cc Boxer powerplant. It spits out 110bhp at 7750rpm and 116Nm at 6000rpm.

The power delivery is punchy and starts low down the rev range. A wide spread of this power makes it ideal for street riding.

With protruding engine cylinders at the front of your feet, you will learn to avoid tight spots.

Its comfortable but wide dirtbike handlebar is another reason to be mindful of car mirrors when squeezing past stalled traffic.

In slow-speed manoeuvres, you will be conscious of the six-speed BMW’s claimed 220kg fully fuelled weight.

The shaft-driven bike has a habit of “straightening up” at the blip of the throttle. It is a trait you will soon get used to, along with heat generated from the engine.

But get it going on open roads and the simple-to-operate bike is a breeze to ride despite a flat seat which lacks cushioning.

A plus point is there is no confusing electronic wizardry. You will only have to worry about the Scrambler’s disarmable one-button traction control and anti-lock braking system (ABS).

Its single speedometer (there is an option to add a rev counter) has a digital window for other gauge readings.

Part of the bike’s charm is not only its thoughtful bare-bones design, but also the notion that it can take you places. The fun begins on gravel tracks as you slide the rear wheel into turns. Just do not forget to disarm the traction control and ABS while you are at it. With the electronic aids “on”, the engine sputters as it tries to cut power to the rear wheel when the throttle is pinned.

Anyway, most Scrambler owners would shy away from offroad forays. The thought of getting dirt on its garter-type fork protectors, steering damper or the satin-finish dual titanium Akrapovic end cans, may be too much to bear.

The bike is equally adept on roads. It has powerful steel-braided dual Brembo front and rear brakes for confident stopping, as well as plush suspension that can deal with most road bumps. However, there is a handling trait you should be aware of.

As the bike has a taller riding profile on 19-inch front and 17-inch rear wheels adorned with tubeless semi-offroad tyres, leaning into turns may feel a little odd.

You just tip the handlebar, but your riding profile remains upright. It is a little counter-intuitive at first, but you will get used to it.