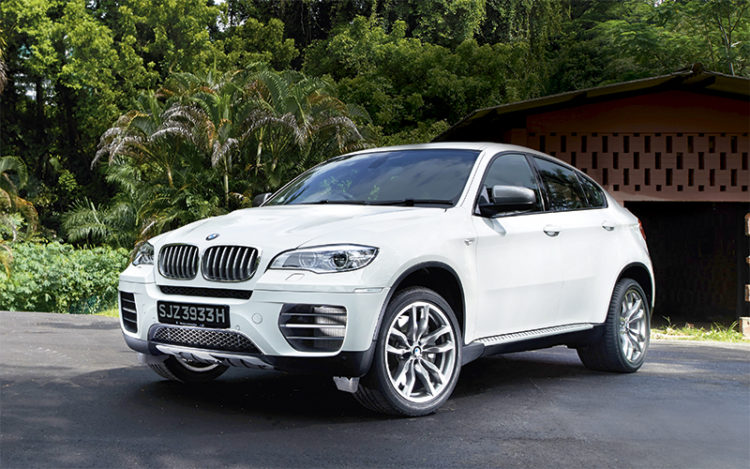 The X6 has always been something of a misunderstood Bimmer, and not without reason. It is an absolute giant of a car, yet it can accommodate only four people (five in recent customer cars that come without the rear centre console), and its exterior design (a combination of SUV and coupe, hence the “Sport Activity Coupe” label) has often been a point of contention. It is easy to see why most people would prefer the X6’s mechanically identical sibling, the X5, which not only looks more “normal” but also costs less and offers space for seven.

But this is precisely why those who buy the X6, do so. They love the very qualities that turn most people off. It’s an acquired taste (like kopi-o kosong) and there’s a new, piping hot flavour in town – the M50d. This X6 variant is part of BMW’s M Performance range, which sport technical and design modifications by M GmbH. Alongside the X6 M50d is the X5 M50d, and both are the first diesel BMWs to be officially sold in Singapore. 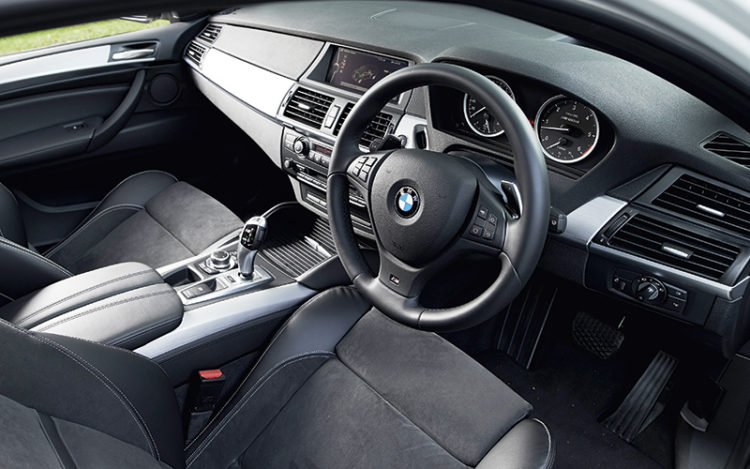 The cockpit’s “M” branding is less overpowering than the engine’s almighty torque.

Externally, the diesel X6 looks much like the petrol version. Short of reading the “M50d” badge on the rear, the most telling differences are the air intakes (which have replaced the fog lamps) and the power dome, the latter being the first big clue to what goodies lay under the bonnet. Other distinguishing elements include mirror caps in metallic Ferric Grey, 20-inch M light-alloy wheels in double-spoke design, and black trapezoidal twin tailpipes. A peek through the oversized kidney grille will reveal yet another tell-tale sign that this is a “performance” BM – an intercooler that is in-your-face big.

Seated behind the wheel, you probably won’t realise immediately that this is a special X6. It takes a while to pick up on cues such as the “M50d” inscription on the instrument cluster, the “M” logos on the gearshift and steering wheel, as well as the “M50d” scuff plates. The Alcantara-and-Nappa sports seats (by M again, of course) lend a nice touch to the cockpit and emphasise the suggestion of sportiness. 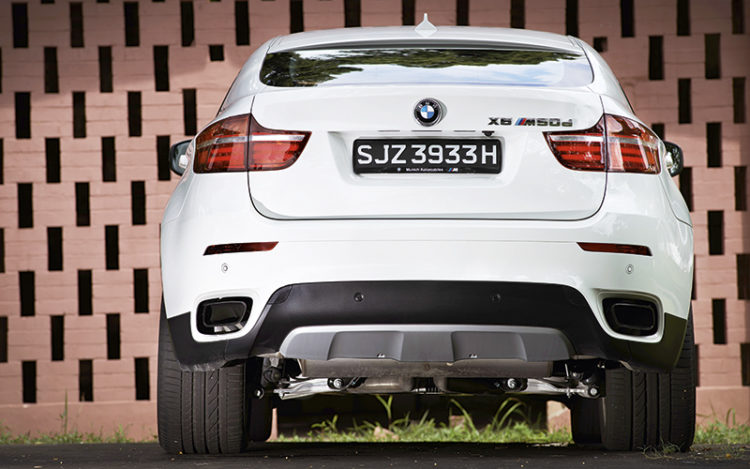 What really sets the X6 M50d apart from the rest of the pack is its engine – the most powerful diesel unit in the current BMW lineup. And it doesn’t take much encouragement for the TwinPower, triple-turbo 6-cylinder to show its true colours.

This car is fast – not gazelle-fast but rhino-fast. Imagine a charging rhinoceros. For a 2.2-tonne behemoth to clock 5.3 seconds from a standstill to 100km/h is no mean feat. In terms of sheer size, weight and power (rhino-ness, in other words), this is a monster. 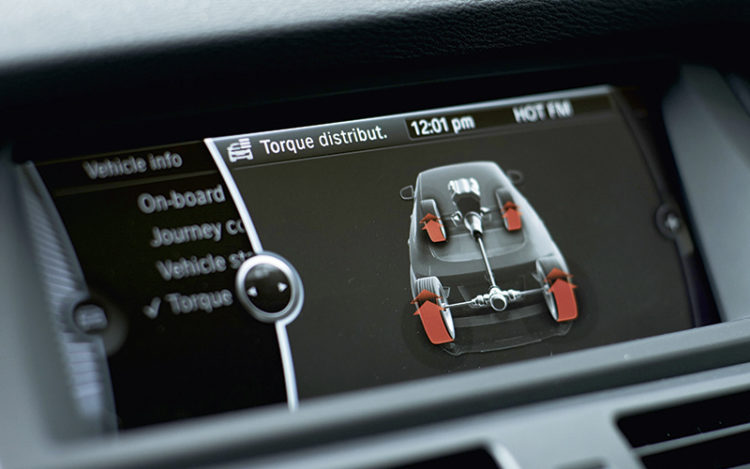 Sub-menu is for kaypoh co-drivers who want to know how the torque is being distributed.

With just the slightest tap of the accelerator, I can feel the torque being unleashed, and the M50d has plenty of it – 740Nm, to be exact, almost double the pulling power of the X6 35i, which has a similar 3-litre displacement. When idling, or driving with less than 1500rpm on the dial, the M50d sounds like a giant panel van (that costs $440k), but rev it above the 2000rpm mark and the engine roars – it’s music to the ears of an enthusiast. There’s no perceptible lag either, thanks to the orchestration of the three turbochargers that kick in at different rev points.

This is a car that begs to be driven hard. It is in its element doing short sprints at higher speeds – perfect for overtaking traffic that remains obstinately undeterred by this huge thing closing in on their rear end along the expressway. Off the highway and onto twisty empty roads, the M-modified chassis comes into its own. Larger wheels and lower-profile tyres than the standard X6 mean a firmer ride, but this is part of the sporty persona. 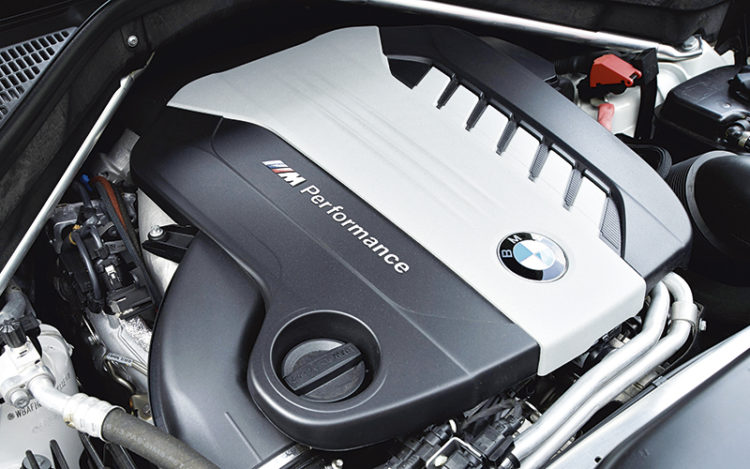 In my hands, the M50d averaged almost 13km per litre, but this dropped to just over 8km per litre when driven enthusiastically in Sport mode. (I get around 9.9km per litre in my dad’s X6 35i.)

The physical size of the X6 might be a “big” deterrent, especially when it comes to manoeuvering your way around narrow carparks and tight parking lots. The elevated driving position affords a good outward view, but the tapering rear windows and small rear windscreen compromise visibility. Where cabin space and boot capacity are concerned, the X6 remains fairly practical. The rear headroom, despite the “coupe” roofline, should be adequate for most Asians. 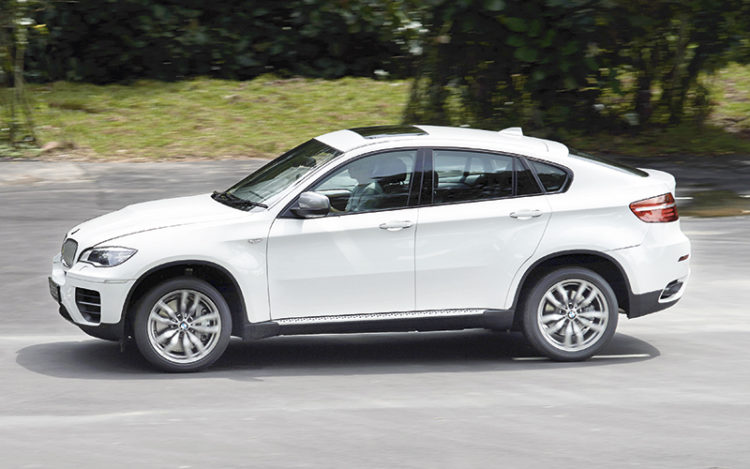 The X6 has always been a car that garners extreme reactions – you either love it or hate it; there is simply no in-between opinion. With the introduction of the X6 M50d, positioned neatly between the regular X6 and the full-blown X6M, there could be more converts from the “hate it” camp, I reckon.