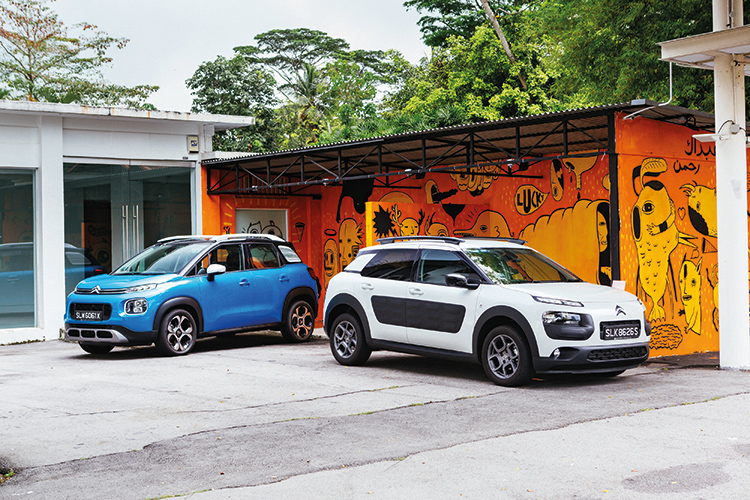 The Citroen C3 Aircross ann C4 Cactus are quirky rides with a unique sense of vehicular humour, which starts with their exterior designs.

When I collected the C3 Aircross and C4 Cactus from C&C France at Alexandra Road, their respective press packs were already placed, thoughtfully, on their front passenger seats for my reference. But the Aircross got the Cactus’ press pack, and vice versa.

This minor mix-up is less confusing than how the two French vehicles fit within the Citroen scheme of things – from Paris to Pasir Ris and every city street in between.

The C3 is a smaller “number” than the C4, but it’s a slightly bigger and significantly heavier (+153kg) hatchback that sits on a marginally longer wheelbase (+9mm).

Both are crossovers with SUV cues, but the Aircross is the more convincing soft-roader for the hard concrete jungle, because it’s taller (+97mm) and equipped with skid plates, along with a chunkier rear bumper that looks ready to bump molehills off as the Aircross crosses the countryside.

My confusion continues with the lineage of the two Citroen newcomers. 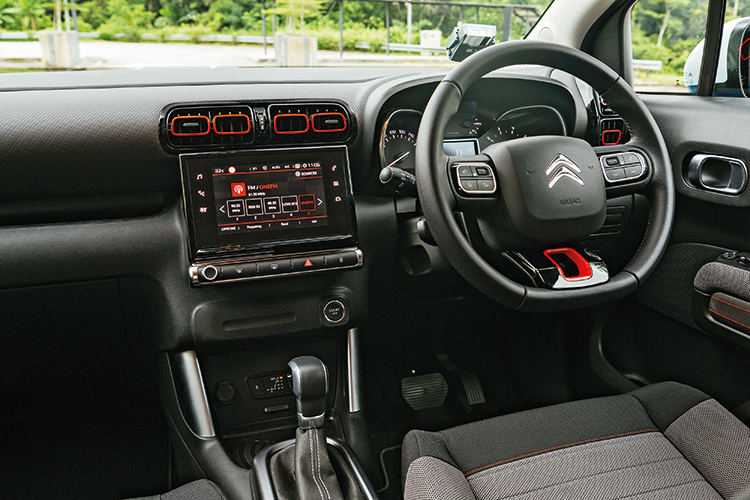 Citroen C3 Aircross has more equipment than the C4 Cactus.

The C3 Aircross is a new SUV that supersedes the old C3 Picasso MPV, which wasn’t sold in Singapore, but there was a C3 marketed here as a neoclassical supermini.

The C4 Cactus uses the platform of the C3/DS3 instead of the one underpinning the C4/DS4 and is unrelated to the C4 Picasso/SpaceTourer.

Learning conversational French in Singapore might be easier than figuring this out.

One thing I know for sure is, these are quirky rides with a unique sense of vehicular humour, which starts with their exterior designs.

They qualify as French-style automotive art, almost worthy of display in the Louvre. 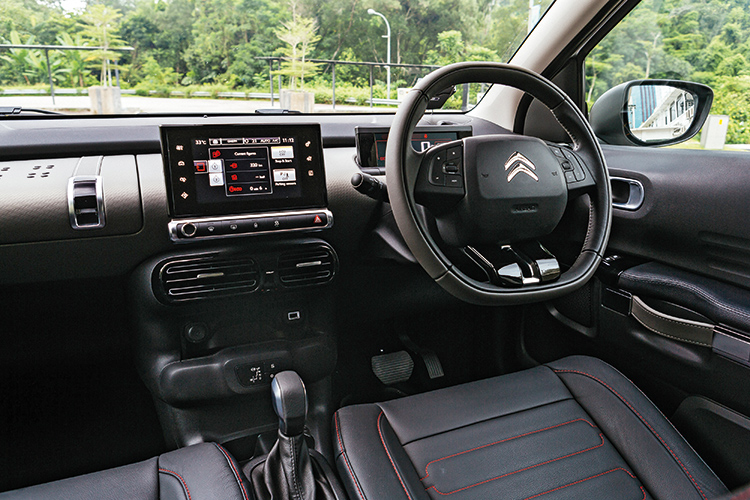 Citroen C4 Cactus is more grown-up than the C3 Aircross.

In a Singapore sea of Honda HR-Vezels, these two Citroens are like a breath of fresh French air.

If common compact crossovers were the kopitiam bread and butter-kaya of grassroots motoring, these two Citroens would be the delicious, buttery croissants of Delifrance.

Candy colours are on the Citroen menu, too, and they’re colourful enough to make the standard body colours offered by the other European mass-market brands (except Peugeot and Renault perhaps) look either blah or bland.

Two of the Cactus’ paint jobs are Hello Yellow and Jelly Red, and the Aircross’ paintwork palette includes Soft Sand and Breathing Blue. 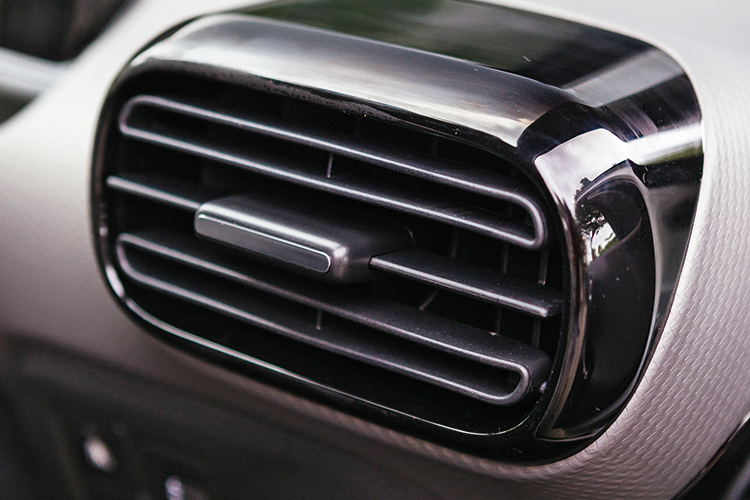 The details adding specialness to the styling are the “Venetian blinds” of the Aircross and the “Airbumps” of the Cactus.

The Aircross’ “screen slats” are actually sheets of coloured film within the polycarbonate rear quarterlight-windows, which provide distinctive graphics as well as greater privacy (glass).

The Cactus’ “capsules” are air-filled panels that protect the doors from dings.

Opening the front doors of both cars and peering into the cockpits, my mind’s eye is transported to a Champs-Elysees patisserie with rainbow macarons on greyscale trays. Delectable eye candy, yummy.

The dashboard of the C3 Aircross has cheery bursts of orange trim on the air-con vents and the steering wheel’s bottom spoke, with the bright colour repeated as thick lines across the seats and above the seatback pockets, and as thin lines across the seat squabs and on the front door-pulls. Orangey and groovy. 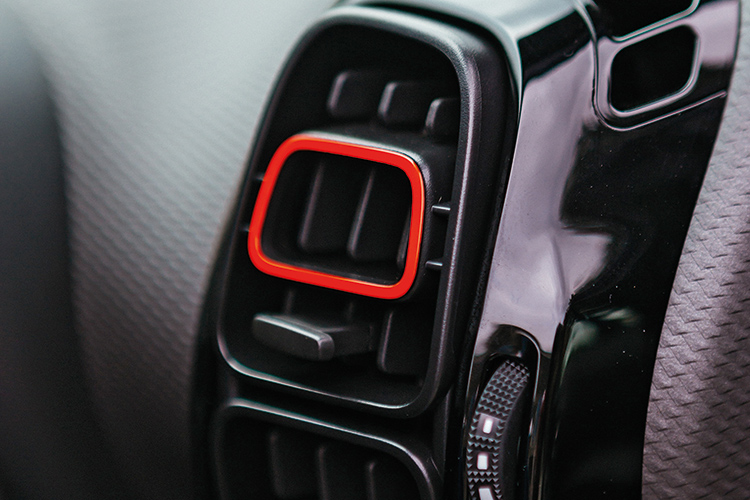 The Aircross cabin comes with fabric upholstery, which suits the funky character of the chunky car.

The Cactus cabin used to be upholstered in fantastic fabric, but it has been replaced with leather of the cheap-chic kind for the 2018 model.

This year’s update also swopped the Cactus’ unusual and comfy two-seater “couch” for a pair of ordinary front chairs and ditched the gigantic, fascinating handbrake for a skinny, uninteresting stick between the seats.

The Aircross’ handbrake looks so much cuter and yet works just as well.

Luckily for the failed artist in me who appreciates random pieces of art, the Cactus has retained the likeable leather straps that pull the front doors closed, the terrific dash-top “trunk” glovebox and the delightfully asymmetric air vents. 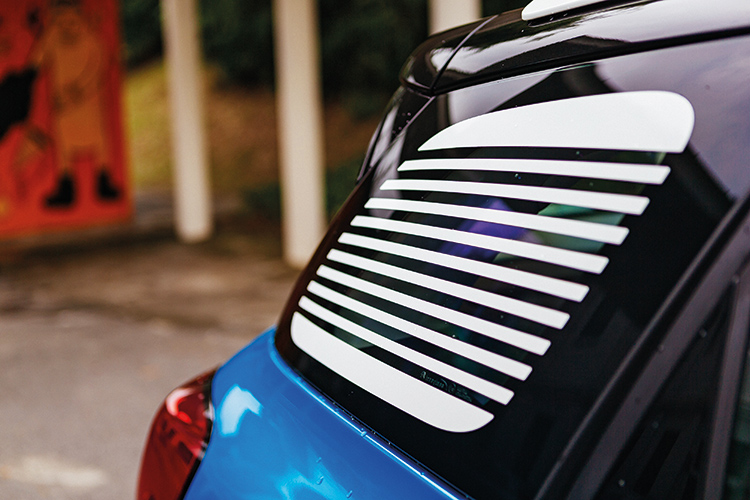 Far less delightful is seeing how the Cactus clearly loses to the Aircross in onboard amenities.

For instance, the Cactus provides a sunvisor mirror only for the driver (the Aircross provides another for the co-driver), and its cabin lamps are measly compared to the interior lighting of the Aircross.

Even the Cactus’ ignition keyhole and adjuster for the side mirrors are unlit. As for keyless access, only the Aircross offers the option, together with push-button start.

Another amenity available in the Aircross and missing from the Cactus is power operation of the rear windows. Incidentally, they are not your usual wind-down windows in the Cactus, which has push-out glass panes instead.

This may cause inconvenience to a Cactus backseat occupant in certain situations, such as when he needs to pass something to someone at door- or kerb-side. Designer details on these uncommon Citroens are sensible features, actually.

The Aircross has a pair of grab handles for the rear passengers, whereas the Cactus has none, but this is less of an issue than the latter’s air-conditioning, which doesn’t reach sweaty folks seated behind as adequately as the Aircross’ more effective air-con system.

Both Citroen interiors use basic plastics in several shades of black and grey, but the Aircross dashboard has rubbery portions that should please the middle-class hipster.

I know a cactus is supposed to be an austere plant, but the austerity measures adopted by Citroen’s bean counters for the Cactus cabin are pretty prickly.

Somehow, though, the penny-pinching accountants found a few francs underneath their desks to purchase a multi-function “tablet” and an instrumentation “phablet” for the dashboard of the Cactus.

Both devices are useful and easy to use, but the 7-inch central touchscreen could respond more quickly to fingertip input and the two displays’ brightness should have been individually adjustable. 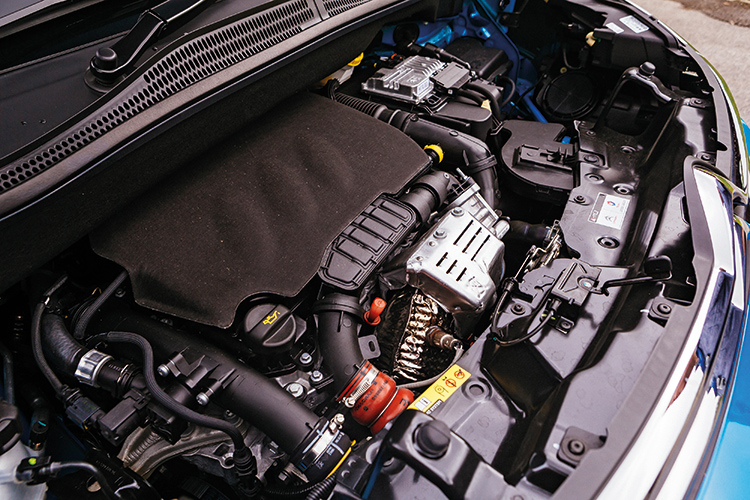 The Aircross has all of the above and also allows some personalisation of certain settings, which is not possible in the other Citroen.

The Aircross’ conventional instrument meters with physical needles and numbers are easier to read, too, and there’s a proper tachometer instead of the Cactus’ impractical rpm readout.

Counting the revs of either engine won’t be a happy hobby for the driver, anyway. It’s the same 1.2-litre turbo 3-pot powering both cars and showing the same disinterest towards driving zest.

Disinterested, too, is the 6-speed automatic transmission, which seems to have been programmed to keep the revs low, the gear high and any kickdown half-hearted. 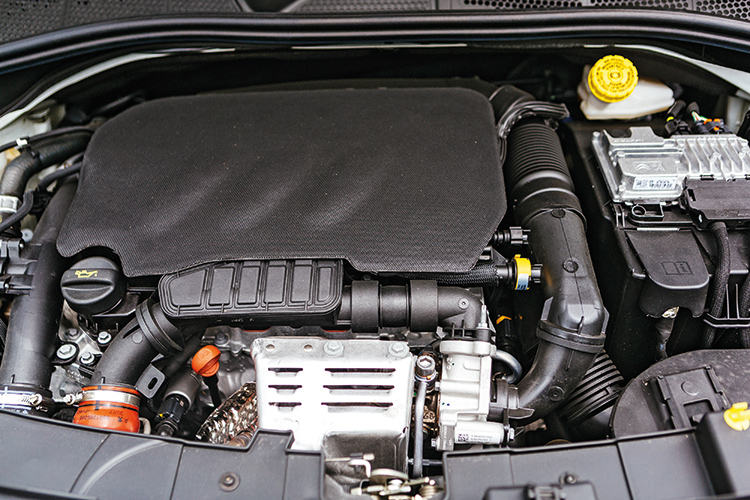 With its 50-litre fuel tank, the Cactus has a theoretical range of about a thousand kilometres before needing a refuel.

The two motors sound a little offbeat on the move and exhibit a slightly off-kilter vibration during idling, but these characteristics are incidental rather than intriguing.

Compared to the previous Cactus that came to Singapore in 2015 with a weak 80hp/118Nm non-turbo 1.2-litre engine and an even weaker 5-speed automated manual gearbox, the current Cactus is a much better performer.

It also performs better than the Aircross, because of the Cactus’ power-to-weight advantage, with the same 110 French ponies getting a 150kg workload “discount”. 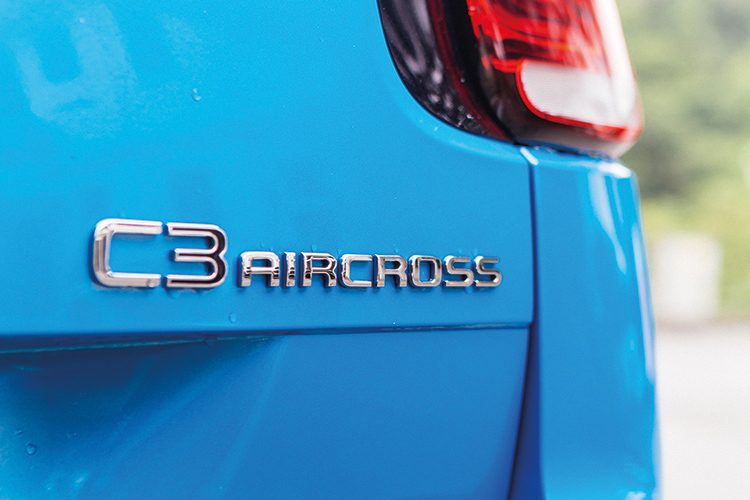 Either way, with most of the work done by their engines’ decent low-end torque, both Citroens are nippy enough in city traffic and built-up areas, and just about “express” enough for expressways if I mash the throttle pedal.

As for ride quality, the Aircross absorbs tarmac imperfections more gently and also more quietly than the Cactus, despite having larger wheels with lower sidewalls (215/50 R17 Bridgestones, versus 205/55 R16 Goodyears).

The stickier tyres of the Aircross give it a bit more grip, but the Cactus cuts every corner with a Gallic gusto that eludes its compatriot.

The comfort level of the Cactus’ suspension over rough road patches is closer to cactus than to carpet, with the bumps felt closely and the thumps heard clearly. The Aircross feels like it’s comfortably airborne when traversing the same patches of rough road. 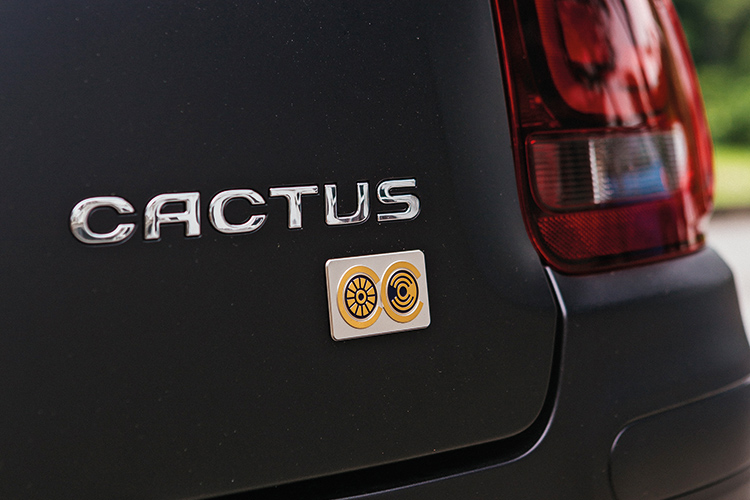 The Aircross also gives its occupants more airspace inside, especially those on the backseat, where the “Venetian” C/D-pillar windows and bigger (than Cactus’) rear windscreen reinforce the positive impression of spaciousness.

The driver and front passenger also enjoy generous headroom, with the headlining and sunvisors located further away from their faces than in the other cockpit.

However, there is noticeably more clearance for the knees parked in the back of the Cactus, plus firmer under-thigh support by the backseat cushion.

According to the spec sheets, the Aircross has more boot space than the Cactus – 410 litres and 358 litres respectively.

According to my unscientific but realistic scenario of a Changi Airport run to catch a flight (Air France in this case), the Cactus can lug as much luggage as the Aircross. 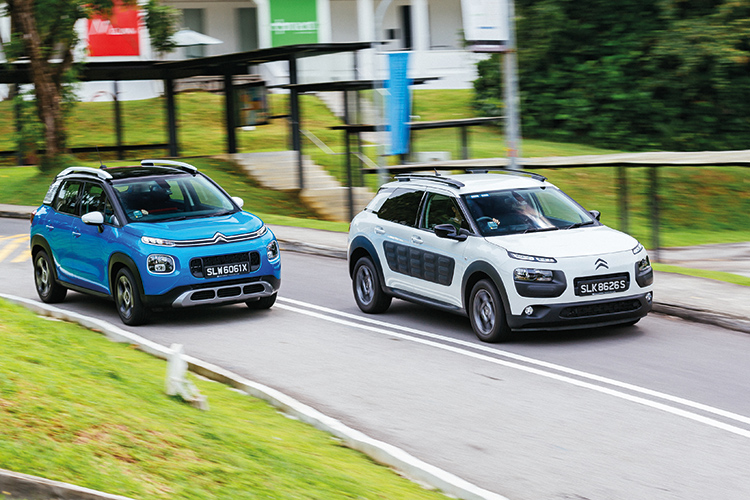 Citroen C4 Cactus (right) is quicker and more fuel-efficient, while the C3 Aircross is cuter, comfier and easier to manoeuvre.

The latter is more versatile as a land transfer, though, thanks to its fold-down centre armrest with a dual-cupholder recess, roomier seatback pockets and more practical parcel shelf, which can be stowed vertically to maximise the cargo hold.

But the Aircross’ glovebox compartment is poorly shaped and quite useless, unlike the Cactus’ stylish yet spacious dash-top box, and the Aircross’ doorbins store less junk than those in the Cactus.

I hereby wave goodbye to the C3 Aircross and say “allo” again to the C4 Cactus.

Both are eccentric city-cars which transform me into a peculiar hipster driver, turn every Singapore journey into a French fashion parade, and transport me from Pasir Ris to Paris and from Marsiling to Marseille, but the C4 Cactus is more cost-effective and less childish than the C3 Aircross. 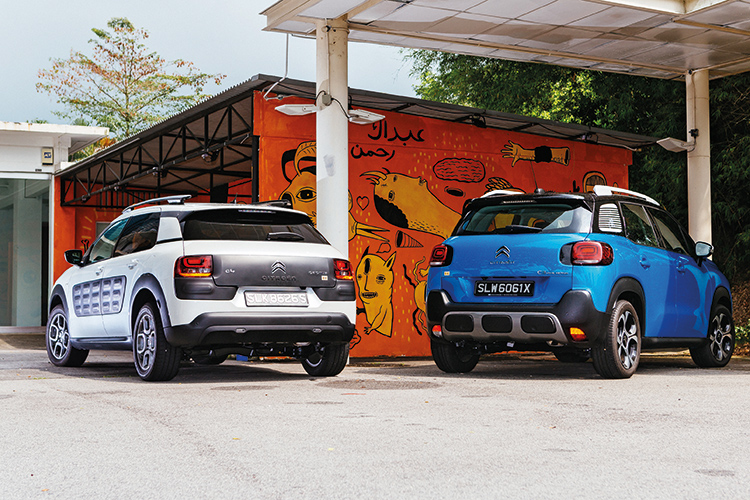