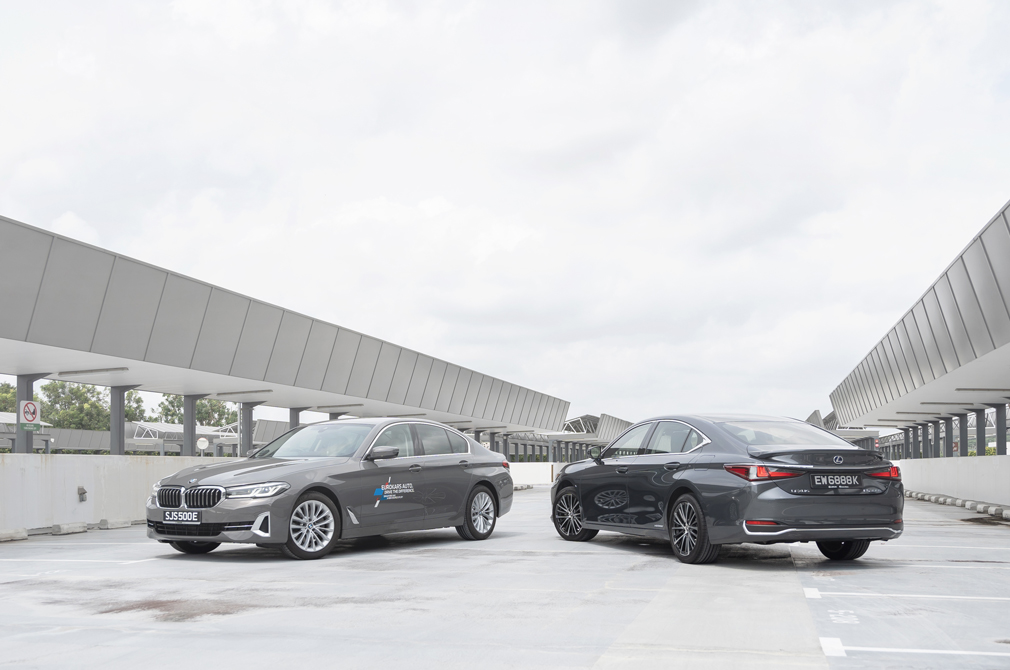 When it comes to executive transport, the traditional large saloon remains the choice for those who wish to project an image of power. Luxury SUVs are all the rage, but in the corporate world, having an executive sedan still says something about its owner.

One of the top choices in the market is the BMW 5 Series. Facelifted two years ago, this quintessential German saloon not only looks sharper – it’s also comfier and comes with even more advanced technology than before.

Aiming to knock the 5 Series off its perch is the Lexus ES. The Japanese brand’s penchant for quality and luxury are on full display, along with its hybrid expertise.

Now, the powertrains are not identical, but since the 520i and ES300h are closely matched in performance and price, it’s likely that buyers interested in one would also consider the other. 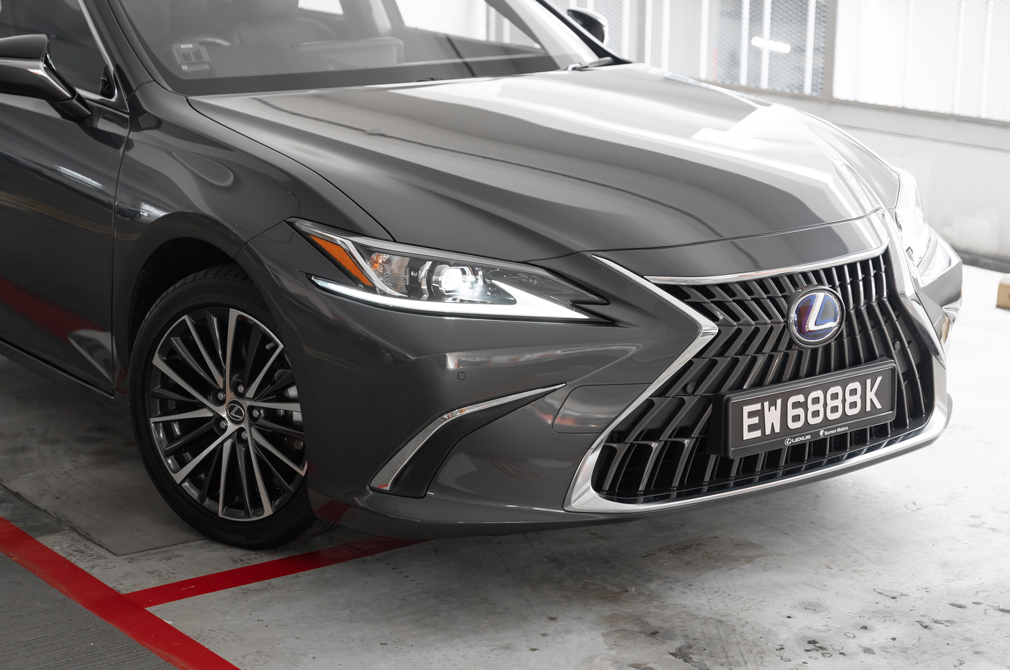 If making a big impression is a priority, then you’ll want to show up to work in the ES300h. Lexus, once known for its inoffensive styling, has eschewed this philosophy for bolder designs.

The ES’s large ‘Spindle’ grille, flanked by sharp headlights and arrow-shaped daytime running lights make the car look more aggressive than its rival. At the rear, the L-shaped taillights and short boot lid add to the dynamic character.

The 520i takes the opposite approach to its rival. If you prefer keeping a lower profile, the 5 Series’ more understated styling will be your cup of tea. Besides, subtle doesn’t always mean boring. 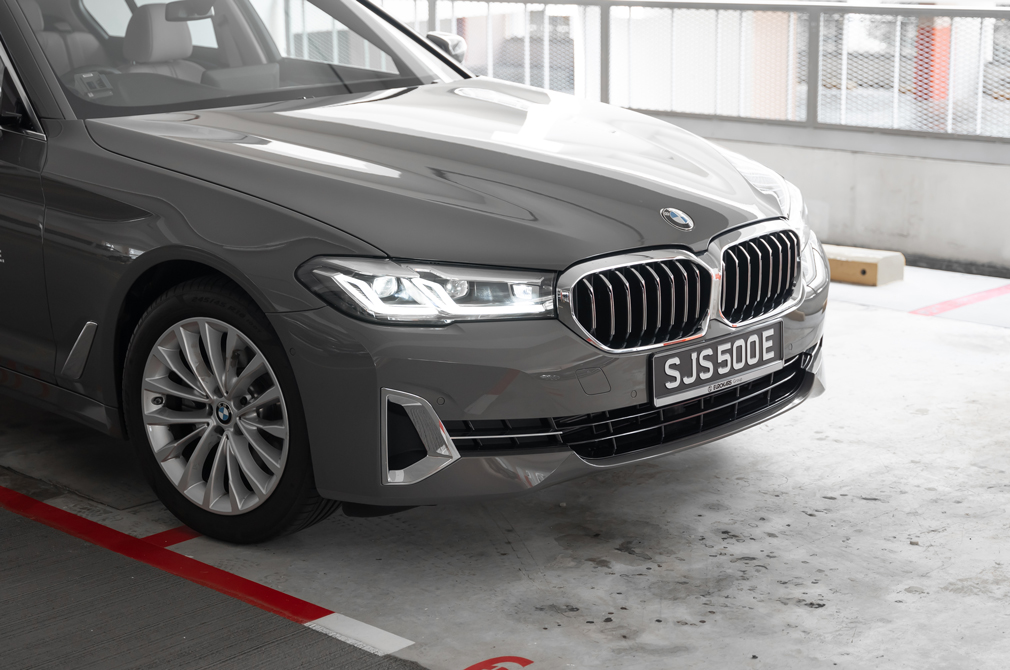 Its slimmer headlights, conventional kidney grilles and clean lines are just some of the design elements that many expect from BMW. At the rear, the 3D-effect external lenses give the tail lamps added pop.

Between the two, I’m more drawn to the 520i’s quiet yet muscular styling. It draws less attention than the ES300h, which complements my reserved character.

Executive saloons are expected to offer space, comfort and technology, and both contenders promise to deliver these in spades. But if the former two characteristics are the ones you must absolutely have, then it’s the ES300h you should consider.

Lexus has a solid reputation for cushy interiors, and the one in the ES is no exception. Plush leather seats and soft surfaces are everywhere in this car.

Making the front passengers feel even more comfortable are the ventilated seats, which when combined with the wintry air-con, will ensure that our tropical climate is always the last thing on your mind in here. 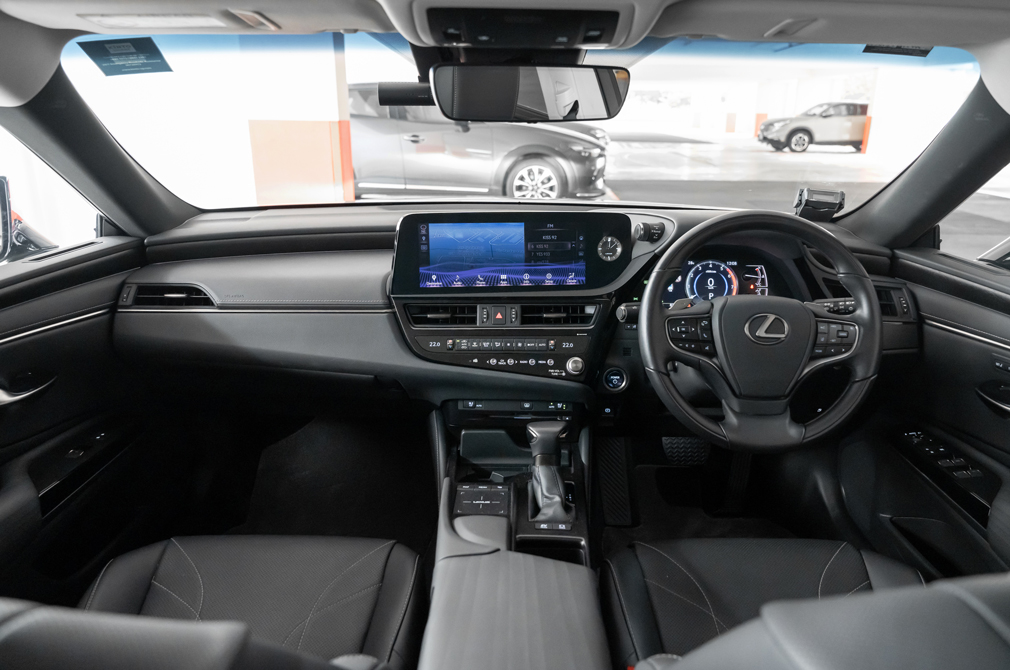 The ES300h isn’t short on technology either, with a 12.3-inch touchscreen display for the infotainment. It’s more accurate than the much-disliked Remote Touch Interface (the touchpad), but menu navigation could be more intuitive.

If you need to ferry (and impress) clients, then the ES300h will help you achieve this. The backseat offers more legroom and foot space than the 520i, and occupants can control the audio, climate, and deploy/retract the rear sunshade.

Now, this doesn’t mean that the 520i has less to offer, for in fact, it is a very resolved executive sedan. BMW has spent decades making 5 Series models, which is why the 520i is polished and well-rounded.

In the driver’s seat, the first thing you’ll notice is that the driving position is spot on – it takes experience to get this right. The thick-rim steering wheel has a more positive feel, and the gearshift lever, though not new, looks like it came out of an aeroplane’s cockpit. Cool. 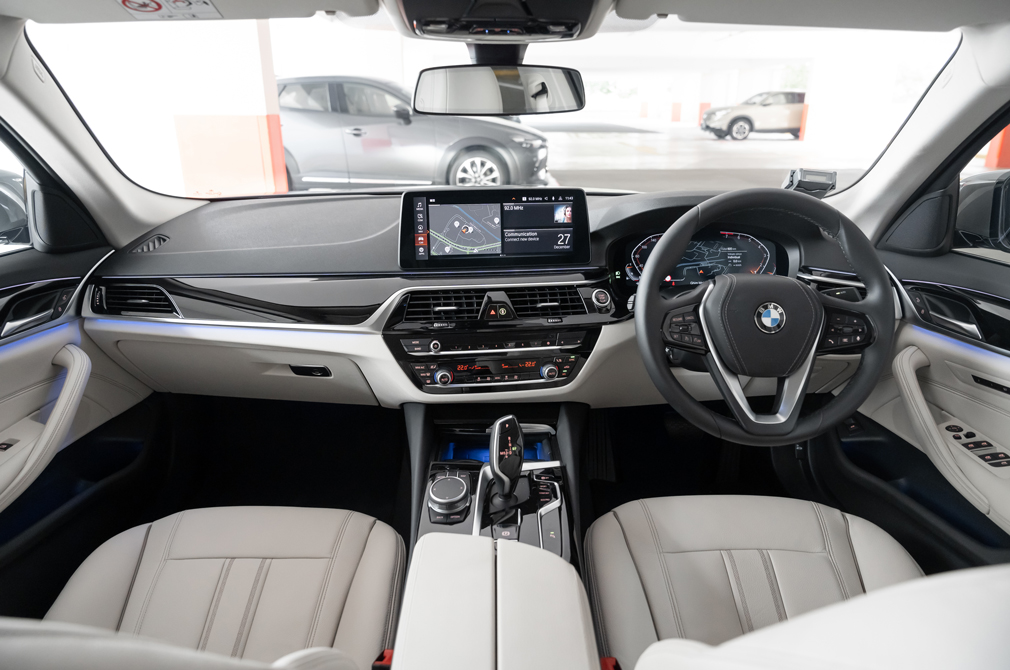 Usefully, the infotainment display is now larger than before and is powered by an updated operating system (OS). Although it’s not the current OS 8, the user experience is very user-friendly.

Even if you don’t use the touchscreen, the handy iDrive knob makes quick work of menu navigation. Speaking of which, the layout is intuitive, so the learning curve for new users is relatively short.

Also relatively short is the 520i’s rear legroom. Considering the car’s 2,975mm wheelbase (the ES300h’s wheelbase is 2,870mm), you’d expect it to be roomier. That said, the seats are supportive and good for long journeys, while the door bins are also larger, helping make the space more practical.

Powering the ES300h is a naturally aspirated 2.5-litre in-line-four and an electric motor. Their combined output is 214bhp and 221Nm of torque, figures that give the car a century sprint time of 8.9 seconds.

This performance is only half the story, though. Thanks to the hybrid powertrain, the ES300h can average up to 21.7km/L. In my experience, it was easy to hit 18km/L, which is efficient for a car of this size.

The electric motor has another advantage: By providing instant torque, the car’s off-the-line performance is smoother, and there’s a nice boost at low-end speeds. 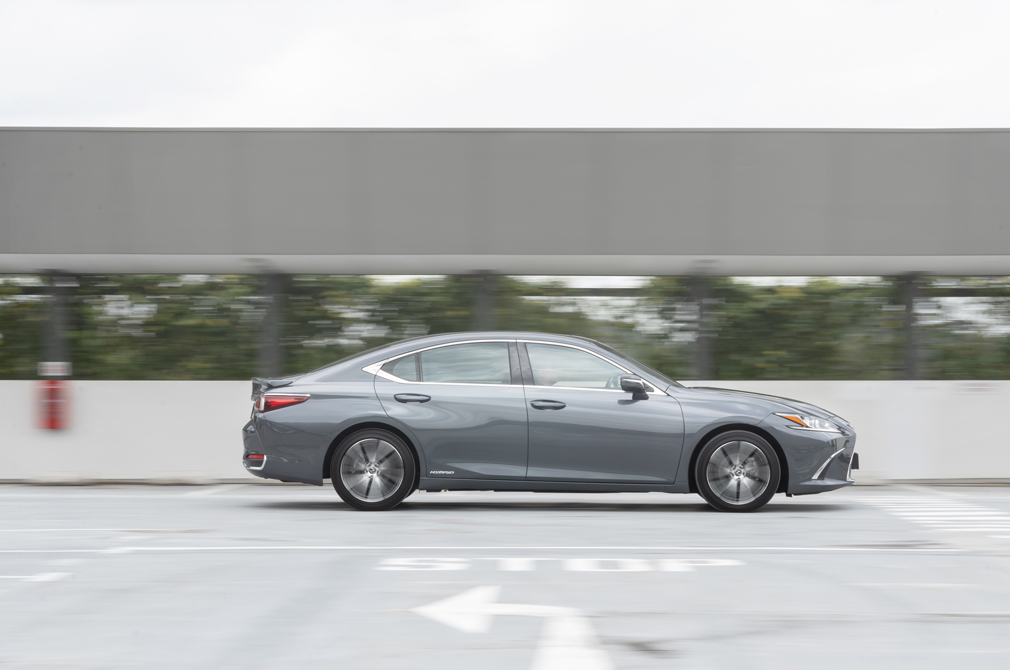 Overall, the ES300h is quiet on the go, making it a comfortable cruiser. It handles better than the previous ES, too, after Lexus engineers focussed on making this generation model more driveable than before. Coupled with the roomy and cushy backseat, the ES300h is ideal for senior managers who have chauffeurs.

Now, although the 520i is not a hybrid, it does have a 48-volt mild hybrid system to help provide smoother starts and better efficiency. The stop-start system operates seamlessly and quietly as well.

The turbocharged 2-litre four-cylinder is sportier than its rival. Producing 184bhp and a healthy 290Nm of torque, the 520i can hit the century mark in 7.9 seconds. It’s not as thirsty as you’d expect either, as it does cover 16.3km per litre of unleaded.

As expected, the 520i shines when it comes to handling. Compared to the ES300h, it is clearly engineered to cater to enthusiastic pilots, and rewards those who know what they’re doing.

The 5 Series’ trademark agility is obvious from the first bend, and establishing a flow through corners comes naturally. It’s a delight to take on a longer route home, yet at the same time, it’s happy to do laid-back expressway runs when asked to. 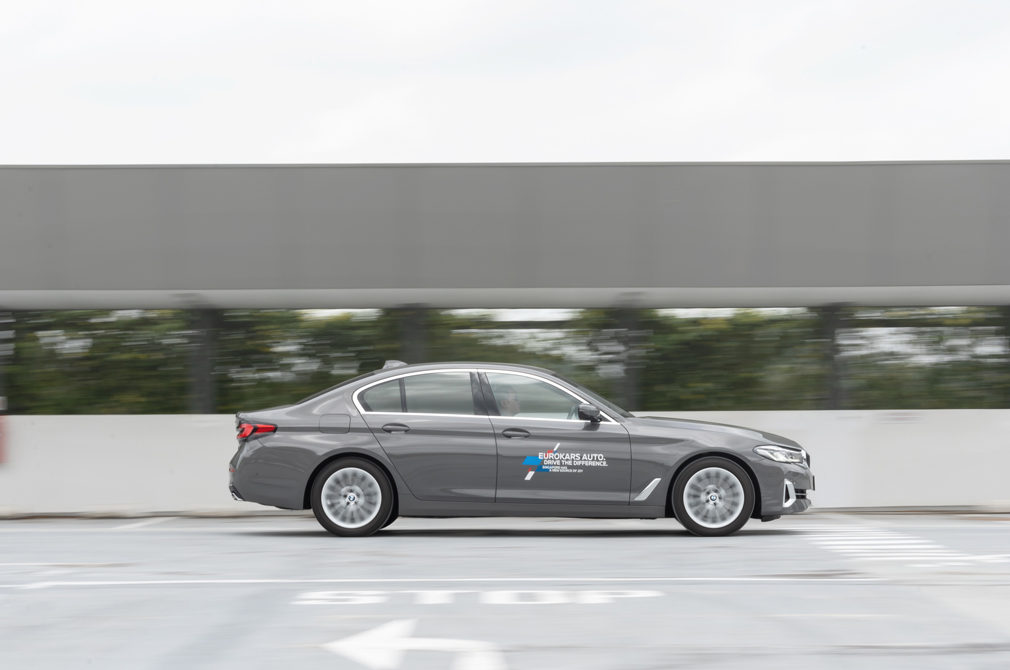 The ES300h is a very complete and convincing luxury saloon. From its posh cabin fittings, plush seats and quiet ambience, it’s easy to see why the ES has been the choice of many a manager and towkay alike.

Plus, with its hybrid powertrain, the ES excels in the efficiency department. Fewer trips to the petrol kiosk mean greater convenience to the owner, who now has more time to dedicate to the numerous pressing business matters awaiting his or her attention.

That said, the infotainment’s user experience could be better still, and while the drive is faultless, keen drivers will be more drawn to the 5 Series.

The 520i does not have the ES300h’s bold design, soft fittings or roomy backseat, but the cabin is well-made, and the infotainment is more intuitive. Add its engaging performance to the list, and it proves even harder to resist. 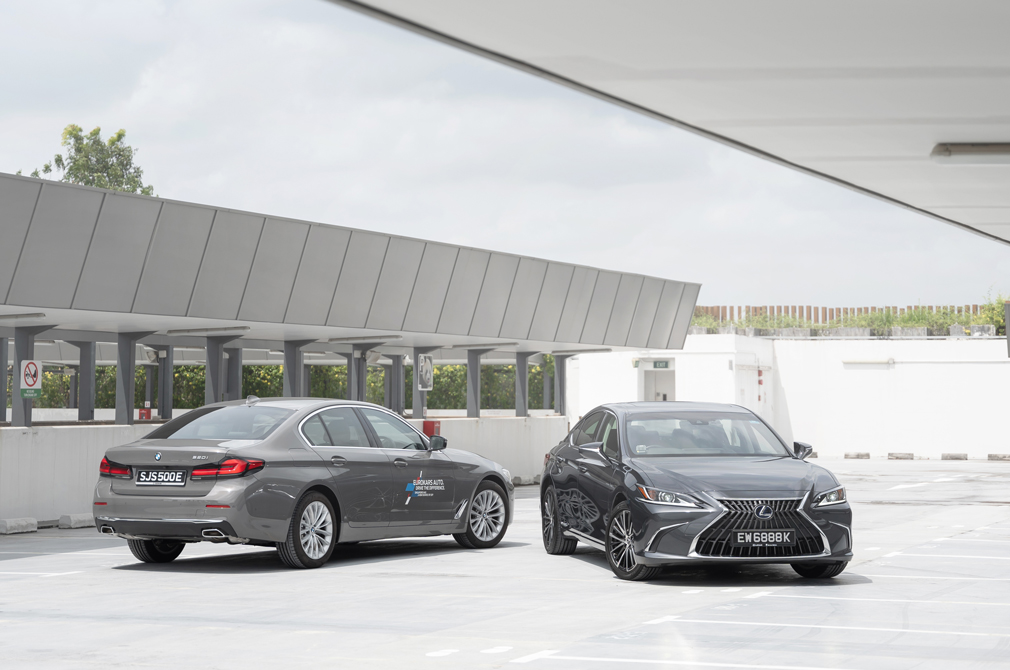