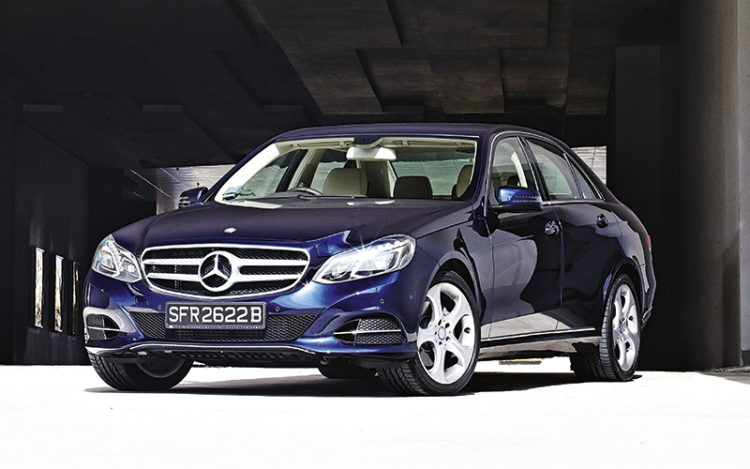 You know a car’s styling has been a flop when, come the mid-life revamp, the ensuing facelift is so substantial that the revised vehicle is almost unrecognisable. And so it is with Mercedes’ updated E-Class – it’s more of a face transplant like the one John Travolta’s character had in the movie Face/Off.

Unusual for a mid-life revision, Mercedes has also chosen to reshape some of the bodywork, eliminating the oddly curved bulge line in the rear doors (which was a pointless attempt to replicate the similar design feature from the 1950s “Ponton” Mercedes saloon) and replacing it with a much tidier straight line. 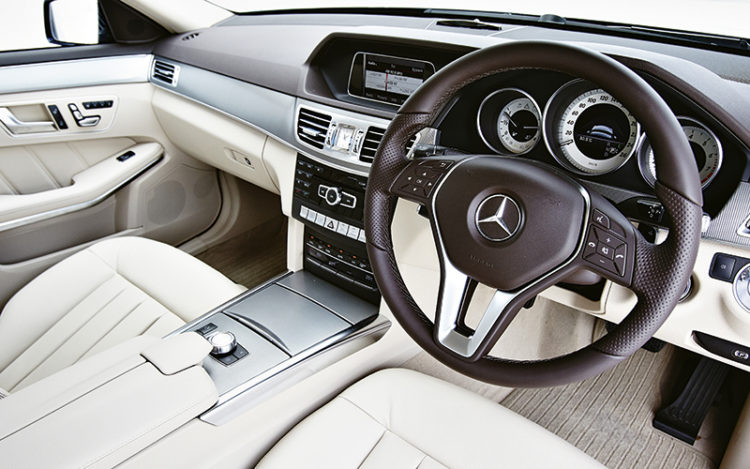 In Avantgarde spec as tested here, there are further cosmetic goodies. Apart from the aforementioned grille, the headlights are an all-LED affair, the sports suspension is firmer and 15mm lower, and there are 18-inch five-spoke rims (over the 17-inch ones on the Elegance variant).

Inside, the big change is that the gearlever has now migrated from its traditional place on the centre console, to a right-hand stalk on the steering column (once the purview of upper-range V6s and V8s). This frees up some room on the centre console for an extra cubbyhole. 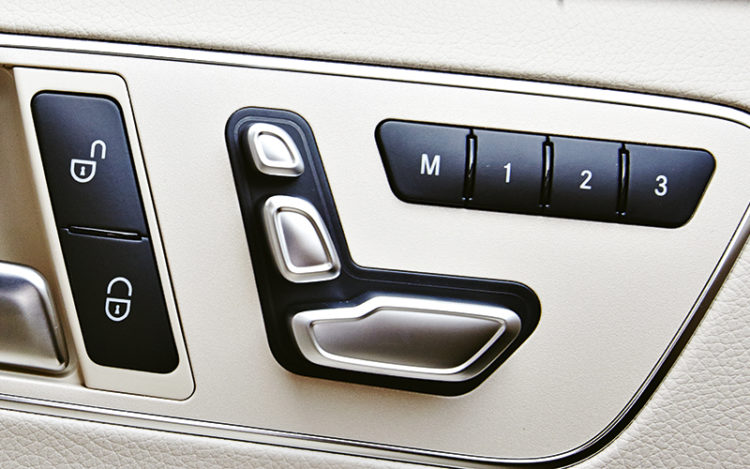 Apart from that, the air-conditioning vents have a sleeker new shape, and an analogue clock has appeared between the two central fascia vents (where the hazard light switch used to sit). On a more subtle note, the cabin colours and materials have been revised, so the interior now looks and feels more upmarket and inviting.

That apart, the cabin is as it was – an airy, spacious and comfortable place, although the lack of folding rear seats as standard (again) does hamper the car’s versatility somewhat. 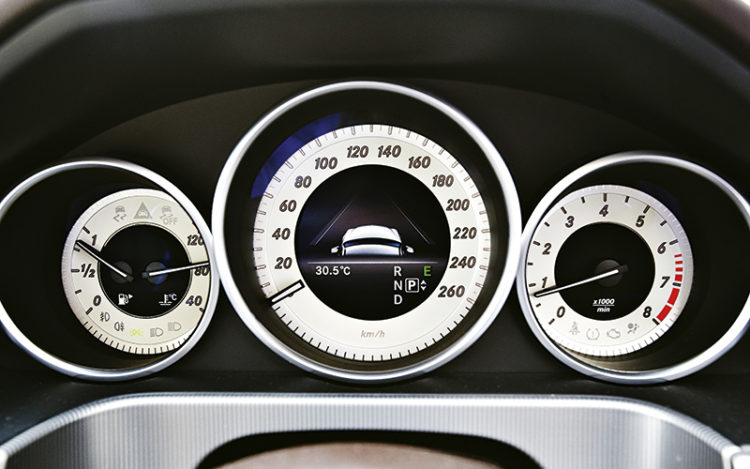 The other significant change is the new powerplant in the two base models. The E200 and E250 come with an all-new 2-litre turbocharged direct-injection 4-pot in place of the old 1.8-litre unit, and it’s a vast improvement. On the E250, power is up marginally by 7bhp to 211bhp, but torque climbs handsomely to 350Nm (from 310Nm). This increased verve is discernible, even if the century sprint timing only drops by 0.1 of a second.

Power reaches the rear wheels via Mercedes’ now-familiar 7G-Tronic 7-speed automatic. It’s a smooth, friendly unit, delivering slick gearshifts, but it’s also slightly hesitant to kick down a gear, which can be frustrating on the occasions when you need immediate overtaking urge. Resorting to the wheel-mounted paddles helps, but even then, the gearbox sacrifices outright speed for smoothness (read: some slushiness is on the menu). 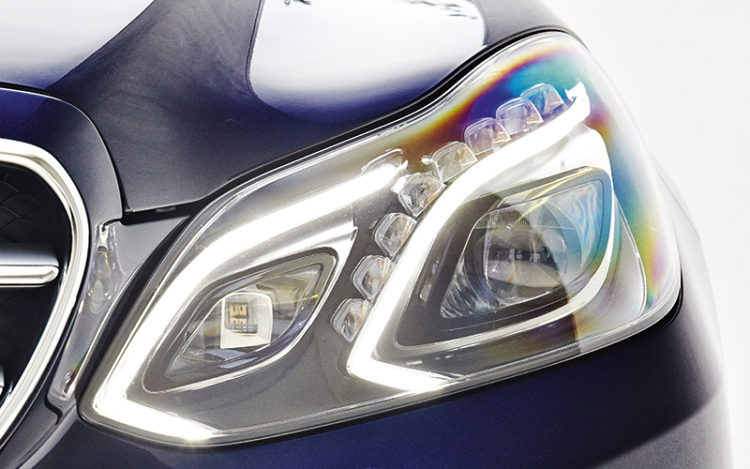 New headlights have beautified this “face”.

But more importantly, this engine feels markedly better – creamier, more rev-happy, and keener-sounding than before.

The new unit is also more efficient, with a claimed combined figure of 16.3km/L instead of 13.7km/L before. This is partly due to direct injection, but more from the stop-start technology that the new model features as standard fare. 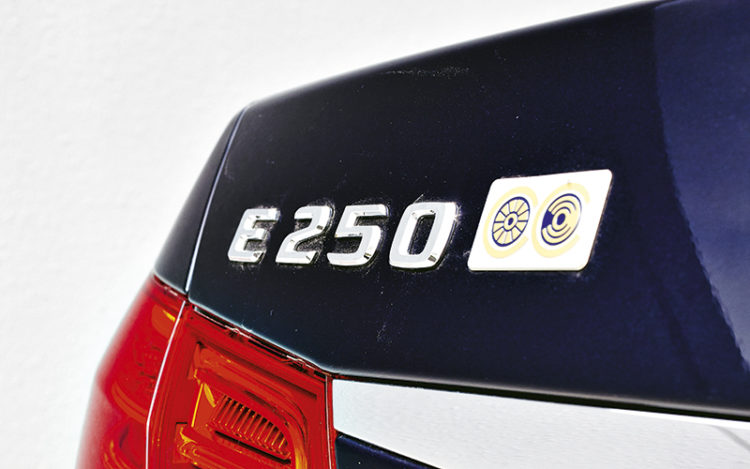 The chassis is noticeably improved, too. The ride (even on the Avantgarde model’s firmer sports suspension) feels better than before – more settled and composed, with very good big- and small-bump absorption and well-judged body control, except perhaps over severe undulations when there is still a hint of float. But the unsettling hint of bump-steer at the rear is now absent.

The car retains its composure around the bends, with good body roll resistance and strong grip. Braking action is excellent, too, with a reassuringly firm and progressive pedal feel. 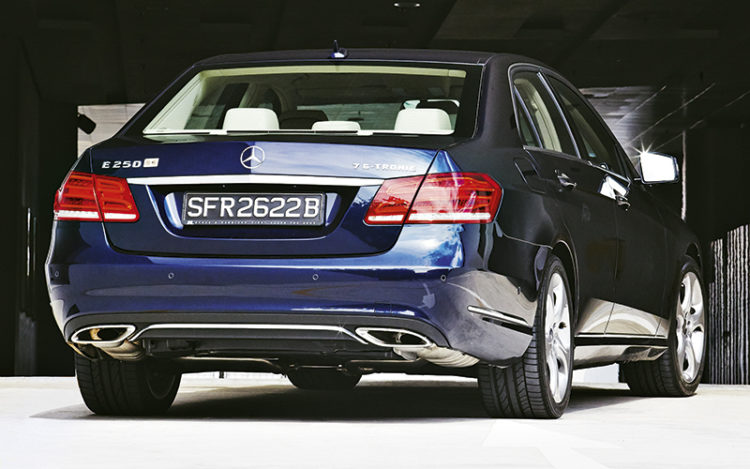 Steering is now electrically rather than hydraulically assisted, and it’s a step-change from the old setup. It’s well weighted and fluid, with decent feel to boot – not sports car-sharp, but nonetheless very well judged for a luxury saloon’s helm, gelling with the vehicle’s effortlessly competent, relaxed dynamics.

Mercedes owners love their gadgets, and the revised E-Class is packed to the hilt with them – some standard and some optional, most of them safety-related. One that helps you to keep to your own lane, blind spot warnings, automatic braking to avoid collisions below 50km/h… the list goes on. 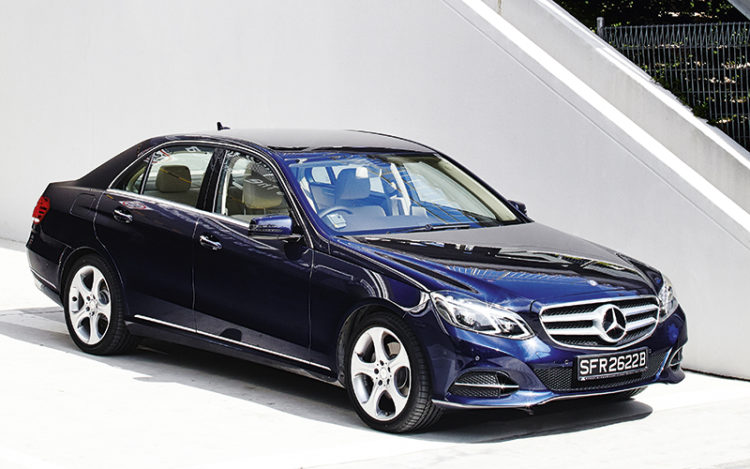 Ironically, the multitude of chimes, warnings and flashes that these various systems generate can, ironically, themselves be dangerously distracting. You hear some urgent beeping while navigating through heavy traffic and end up frantically checking the instrument panel, side mirrors or whatnot to see what exactly the emergency is, in the process taking your eyes off the road. You can turn some of them off but infuriatingly enough, they’re switched on again the next time you start the car.

But try to overlook the fact that this car nags you more than your mother-in-law, because the comprehensive mid-life revisions have made the E-Class a true contender in the luxury saloon arena on pure merit again, instead of it having to bank solely on its badge. The excellent new engine gives it the firepower to stand head to head with its rivals, it’s been improved on almost every other front as well, and with its vastly prettier face, it now looks the part, too.