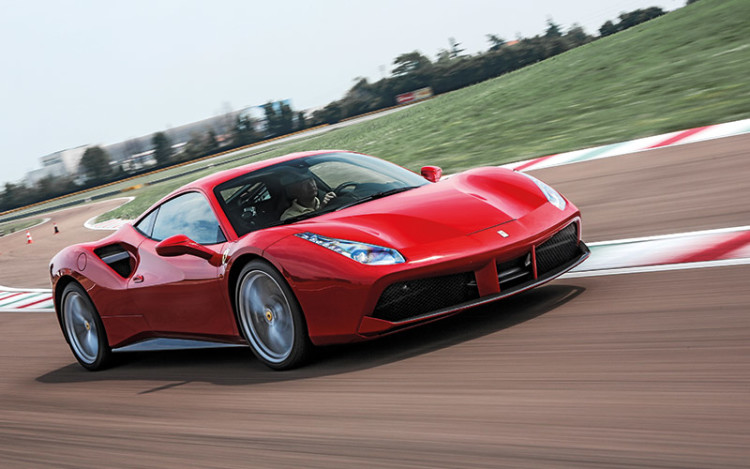 Ferrari purists consider models powered by naturally aspirated engines to be the purest expression of the brand’s DNA, despite the fact that the Italian carmaker never strictly adhered to this formula.

Ferrari utilised turbocharging twice before – once in the iconic F40 and another time in the lesser-known 208 GTB. The former was designed to make huge lumps of power (478bhp to be exact), while the latter was created to dodge car taxes in Italy with its 2-litre V8.

But by and large, Ferrari championed natural aspiration in its road cars over the past decades. The Prancing Horse even took naturally aspirated engines to the loftiest heights of the automotive world, when it produced the 458 Speciale, which has a 4.5-litre V8 rated at 135bhp per litre and a 9000rpm redline. But that was before ever-tightening environmental regulations forced it to grow a conscience and adopt turbocharging.

Ecological concerns aside, Ferrari exists to race, and in order to win, the manufacturer has to embrace the latest technologies to shave that extra tenth of a second – even if it means eschewing its naturally aspirated formula. For the Italian company, it is all about being the quickest.

To get more out of an engine while reducing its CO2 footprint could not be achieved by going further down the naturally aspirated path. It meant joining the current trend of turbocharging and downsizing. This move also lets Ferrari allude to the (tenuous) link between its road cars and its current Formula One machines, which have turbocharged hybrid powertrains. Thankfully, there is no hybrid technology in the 488 GTB, just turbocharging.

The 488 GTB’s 3902cc V8 is over 500cc less than that of the aforementioned 4.5-litre V8, but the former gains two ultra-lightweight turbochargers, which feature compressor wheels made from a titanium-aluminium alloy and ball-bearing-mounted shafts.

The turbochargers’ impellers fit more snugly in their housings, thanks to “abrade-able” polymer seals that can be scraped away as the turbos bed in, thereby increasing their efficiency. 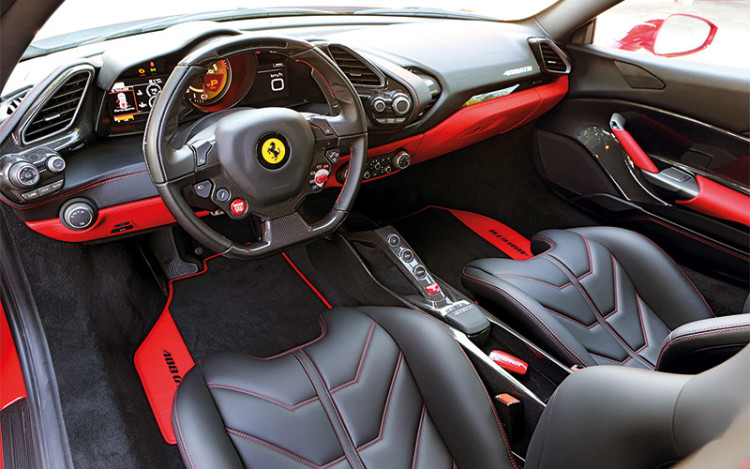 The powerplant’s compression ratio is kept relatively high at 9.4:1 to improve combustion and achieve good part-throttle characteristics. Exceeding the 458 Italia’s 570bhp is easy with turbocharging, but Ferrari wanted to have at least an 8000rpm operating range, in lieu of the 9000rpm previously.

That said, the 488 GTB’s output of 670bhp isn’t exactly fantastic in the world of turbocharged motors. However, the way Ferrari has applied this technology, is.

In the first three gears, the 488 GTB’s torque curve mimics that of a naturally aspirated engine, rising along with the revs and increasing incrementally with each upshift. This progressive nature also saves the traction control from working overtime. Since the V8 doesn’t deliver maximum torque at lower revs, turbo lag isn’t palpable. Only from gears four to seven is the full torque figure available.

However, the downside to having a pair of turbos blocking the exhaust flow is the attenuation of the high-pitch scream that characterises naturally aspirated Ferraris.

So to give the 488 GTB its “voice”, the engineers have replaced the Ferrari “wail” with a loud, flat-plane tenor roar. It’s not bad, but it also doesn’t sound like any Ferrari I know. This is exactly what happened to F1 cars when they switched from naturally aspirated to turbocharged engines.

Now, while the soundtrack isn’t titillating, this automobile’s performance certainly is. Floor the throttle and the 488 GTB will accelerate from rest to 100km/h in three seconds. Keep your foot on the loud pedal and 200km/h will arrive 5.3 seconds later. If you select Race mode, the surge of acceleration will pin you to the seat even if you’re in fourth gear. 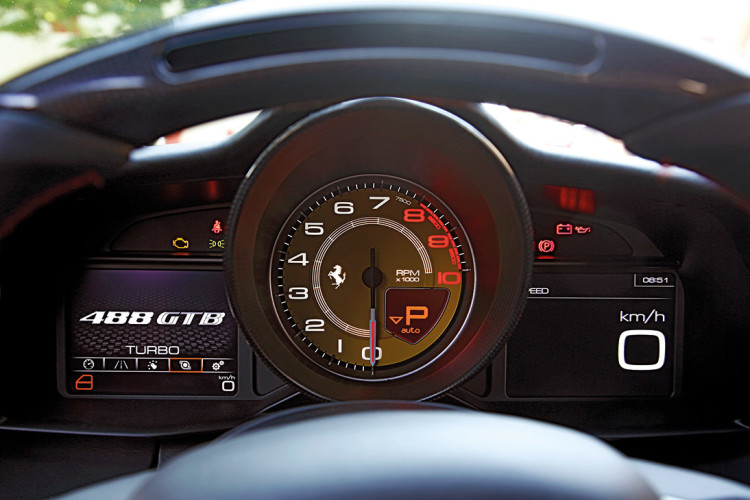 Complementing the powerplant is the 7-speed dual-clutch gearbox, which has shorter sequential shift times compared to the dual-clutch transmission in the 458 Italia. In this car, all the driver has to do is hold the “-” paddle and the gearbox will continuously downshift until the ideal gear ratio is chosen. There’s no need to pull back on the paddle multiple times to achieve this.

Helping the driver carve through corners is its stability control system, which is called Side Slip Control 2. The new algorithms in said system are focused on yaw control and help keep the vehicle in a neutral handling state by diverting power via the Active E-Diff, selective braking and active roll stiffening via the rapid-responding SCM 3 magneto-rheological dampers.