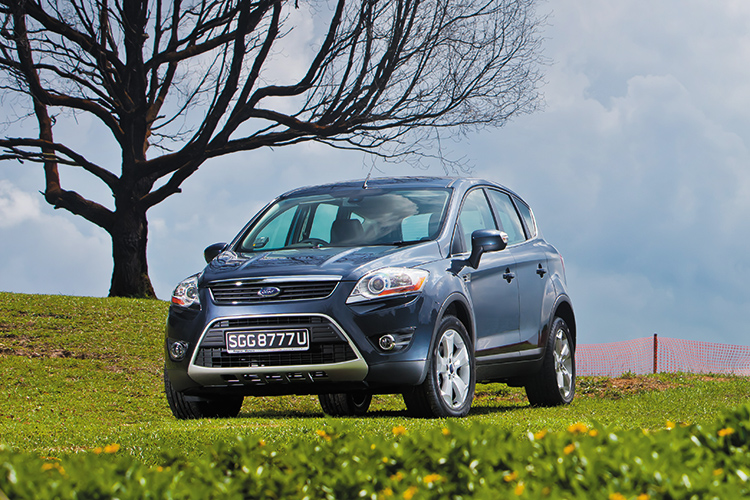 The marketing experts who named the Ford Kuga must have been the same guys who gave us the Ka, which is a nice car. This “cougar”, by the way, is not the first feline model name from Ford – back in the late 1990s, there was the kittenish Puma.

Less cat-like but still animalistic is the Kuga, which looks like the taller and brawnier Focus hatchback it basically is. Chunky 18-inch alloys are its big paws, flared fenders are its muscular shoulders, and bi-xenon headlights are its bright eyes. Sharp teeth ready to bite are represented by the lower trapezoidal grille, which has slats aplenty. Of the six “fur” colours available for this animal, the most appropriate would be Panther Black. 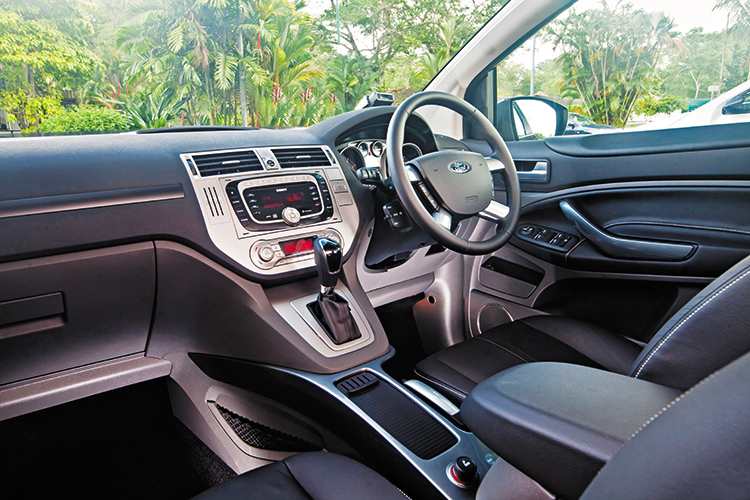 Logical layout means foolproof operation, but front seats really ought to be larger and more comfortable; plastic quality is average.

Enabling the Kuga to play predator in suburbia is an ex-Volvo 2.5-litre turbo 5-cylinder. The prey in question would be the Volkswagen Tiguan, the Ford’s primary target, with turbocharged Japanese rivals – Subaru Forester and Mazda CX-7 – being secondary quarry.

The Kuga powerplant might be a remnant of Ford’s Volvo legacy, but it is modern and relevant to the job. Its 200bhp of power matches the Tiguan Sport and its 320Nm of torque is significantly higher (by 40Nm), but the 5-speed Durashift automatic is less efficient than the VW’s 7-speed dual-clutch affair, which translates into slower acceleration and higher consumption. 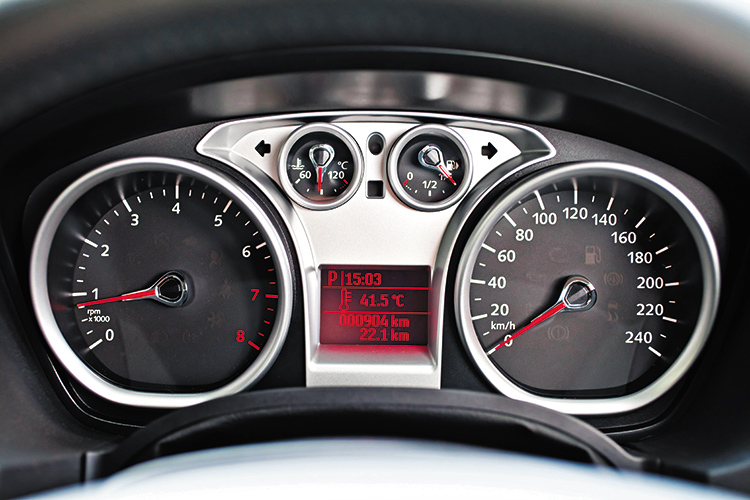 But compared to the 6-speed manual Kuga, the auto version is just four percent thirstier, which is pretty impressive.

Also admirable is its driving performance. The low end is strong enough to keep the Kuga ahead in downtown traffic with minimal effort from the driver, while the amply turbocharged mid-range makes overtaking similarly effortless. Every part of the robust output is served out smoothly. The engine sounds good even when stretched, with a lovely burble that enlivens every trip to the 6500rpm redline.

Thumbnail-sized ignition button is one of the cutest in the business, but the engine it starts is serious stuff.

The gearbox is slick swopping between ratios, but its manual “plus-minus” action could be quicker. Another minor problem is the drive mode’s in-dash indicator, which has to compete for attention with the same display for the time, temperature, trip computer and also the odometer.

The car’s commendable performance comes complete with capable handling. Compact SUVs tend to be clumsier than their lower and lighter hatchback cousins, but the Kuga is surprisingly nimble. Whatever corner you point its nose into, the all-wheel drive chassis just grips and goes, with nary a protest from the tortured tyres. Some roll is present, but body control is otherwise excellent, while the accurate and well-communicated electro-hydraulic steering is always on top of the situation. The brakes are great, too, hauling the car down from speed in good time. Anti-lock and Brake Assist are standard fit, along with ESP (Electronic Stability Programme) customised to prevent a potential rollover. 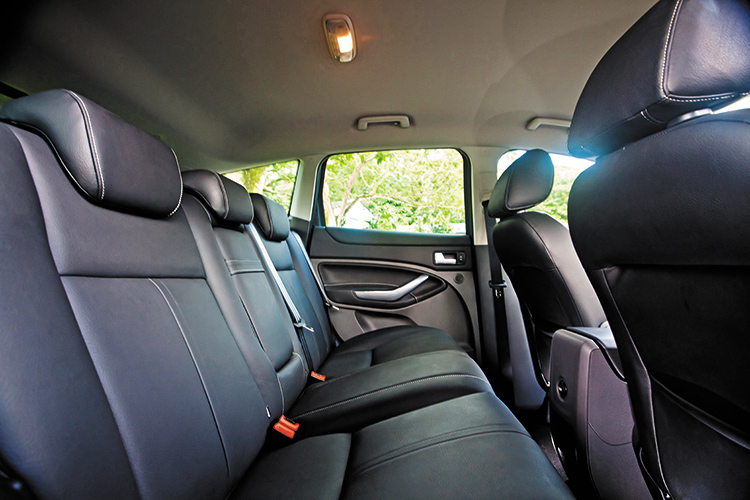 Two occupants can be accommodated in here without complaint; storage areas are cleverly hidden beneath the rear seats.

So, the Kuga is warm enough on the move for the enthusiastic driver. Not cold enough, though, is the dual-zone air-con, at least on the test car we drove. It needs to be set at no more than 20 degrees Celsius for the front occupants to feel anything, and it also takes a short while to start working hard in our hot weather.

The rest of the Kuga cabin is more difficult to fault. Major and minor controls are neatly organised and readily accessible, particularly the oversized switchgear for the audio remote and cruise control. The factory-specified Sony six-CD, eight-speaker hi-fi system is very user-friendly, ready for your iPod/iPhone and loud enough for non-audiophiles. 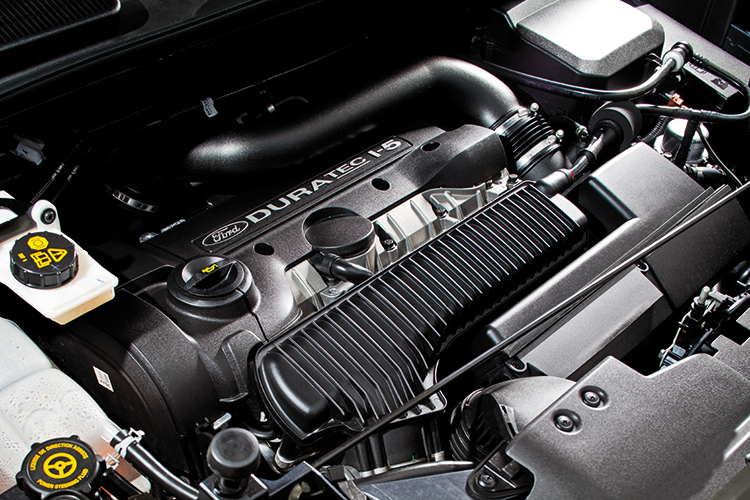 Ford Kuga’s turbocharged 2.5-litre engine is smooth and melodic, and its healthy torque is spread cleanly across most of the rev range, making daily driving fuss-free.

Silver appliques provide some visual interest, but the most interesting element is the keyless “Ford Power” ignition button, which is cute in its size (barely bigger than your thumbnail) and position (right below the hazard switch). Apparently, the less than 500 milliseconds it takes to start the engine is one of the quickest in the Kuga segment.

A useful array of storage compartments in various sizes and places, together with a well-shaped 360-litre boot (whose versatility is boosted by the split-fold seats and two-piece tailgate), fulfil the vehicle’s promise of utility. Quality-wise, despite the Kuga being made in Germany and all, most of the hard plastics are harder than in a 2011 Tiguan and the way the centre box cover flops down is decidedly downmarket. 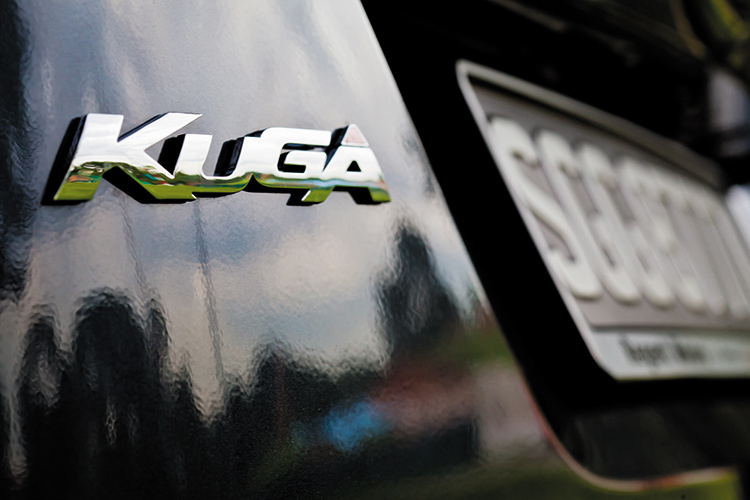 Space for average-sized passengers is adequate, although the rear seats might be too upright for those who prefer to slouch. These “low-profile” people won’t enjoy their blue-tinted vantage point, but they will like the generally refined ride on the highway. The front occupants, however, will probably dislike their so-called “sports style” seats, which are simply too small and quite uncomfortable. They are not even supportive to begin with.

Ford’s suburban wild cat is not perfect, then. But it is a powerful attack on the current class leader, the Volkswagen Tiguan, thanks to its more accomplished drivetrain and striking exterior and interior design. 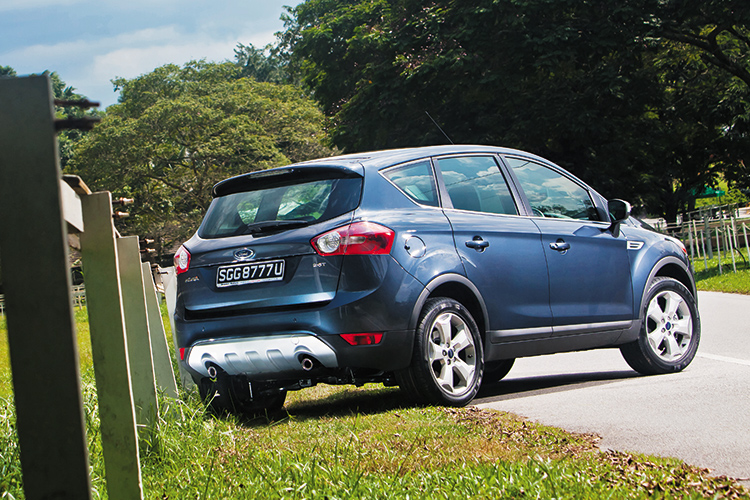 The Ford Kuga is essentially a taller and brawnier Ford Focus hatchback with a stylish lifestyle slant.

Check out the latest Ford Kuga