For some people, the usual German limousines just won’t do. Even the German manufacturers themselves acknowledge that. How else can you explain Porsche’s creation of the Panamera? This is a car that was obviously conceived to not be another 7 Series or S-Class.

And you’ll have to count on the Italians to do things differently in this field. No discourse on unconventional limos will be complete without the Maserati Quattroporte. 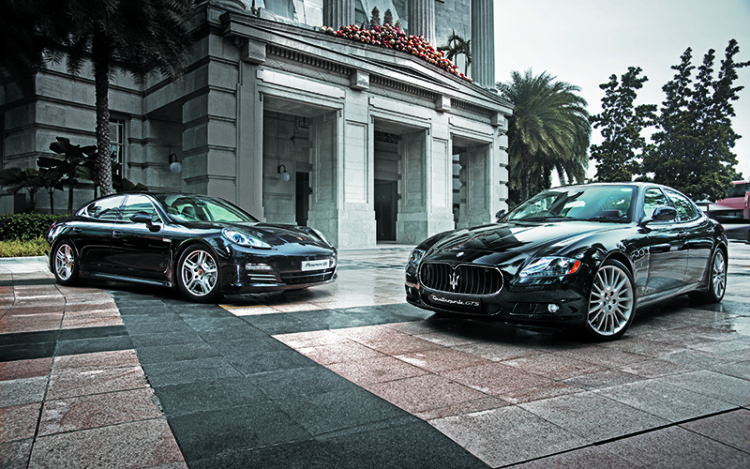 Coming from the land of la dolce vita, where cars tend to be either exotic (think Ferrari, Lamborghini, Pagani) or very chic (Fiat 500 and Alfa Romeo Mito), the Quattroporte stands as Italy’s plushest “four-door” (the name’s literal translation). The next most luxe Italian saloon is many rungs down, like the archaic Alfa Romeo 166 or something from Lancia that no one outside of Europe knows about.

Porsche and Maserati will have us know that their cars aren’t direct competitors. But any suitably budgeted gentleman  who doesn’t want his carriage to blend into the sea of the usual suspects will surely give both equal consideration. 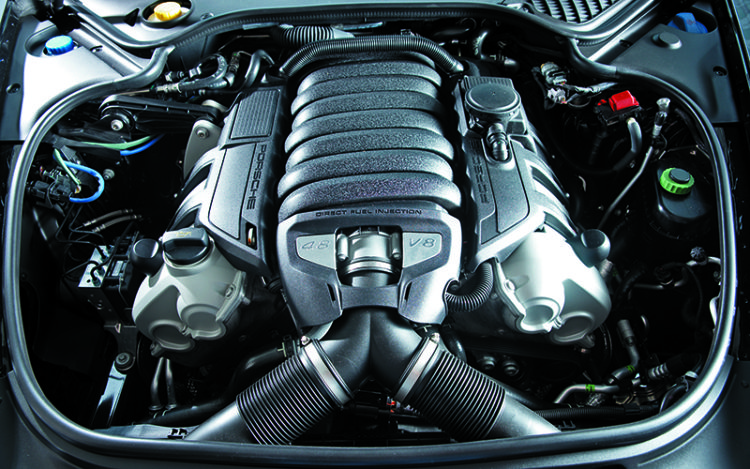 Although Porsche doesn’t have much experience penning front ends to house engines (apart from the Cayenne and the old 928, Porsches have their powerplants set behind the driver), the Panamera has a convincingly good looking snout, one that doesn’t shame its golden Stuttgart crest.

Viewed from the front, the Porsche 911 genes are clear to see and it’s hard to imagine anyone having problems with the inspiration here. It’s probably everywhere else on the car’s design that people will have problems coming to terms with. While the generous wheelbase (2920mm, but still shy of the Maserati’s 3064mm) helps to visually set the car down, gifting the 911’s silhouette and hunchback tail meant ending up with a rather generous posterior. That unique behind also happens to be a liftback, making the Panamera the world’s only luxury hatch – of sorts.

The car is best in metallic hues; better than black (shown here), as it conceals the cues that help break up the visual bulk. 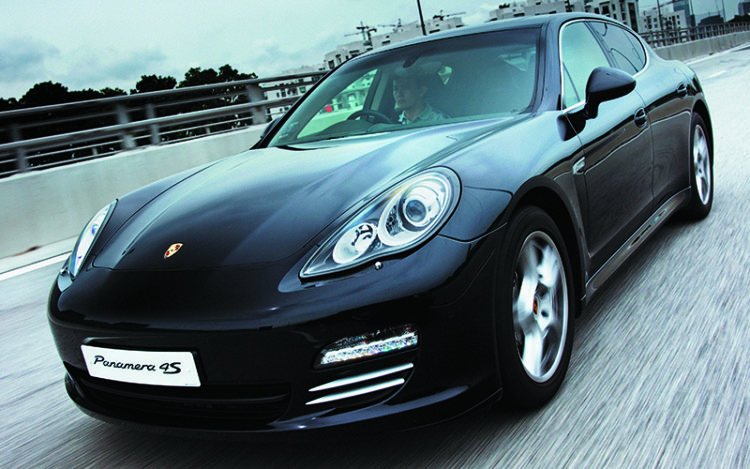 No such justification needed with the Quattroporte. It’s not immediately obvious that the Pininfarina design is already into its sixth year. The choice of colours is down to the buyer’s personality, because the Maser is as comfortable being posh in light champagne as it is being a menacing bad boy dressed in ebony.

There are now three versions of the Quattroporte and the one selected for this face-off is the range-topping Sport GT S.

To achieve the sporty look, the car does without the brightwork around the windows and exhausts found on other Quattroportes. It’s also shod with dedicated 20-inch alloy wheels, shielding red brake callipers. Most unusual though, is the blue tint over the headlights. 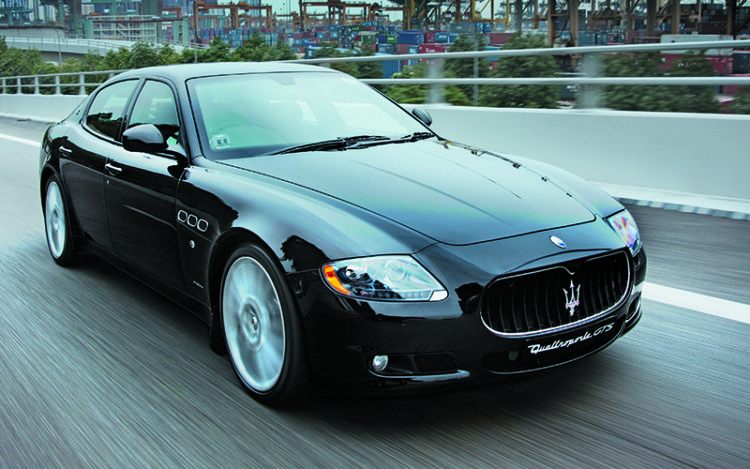 While the basic dash architecture is very traditional, there’s an obvious bias for the driver. There’s even an extra piece of aluminium on the right of the driver’s footwell, to protect the carpet from vigorous use.

In Sport GT S trim, the tiller and gear knob are finished in Alcantara, as are part of the seats. (Also available in subtler tones, if you insist.) 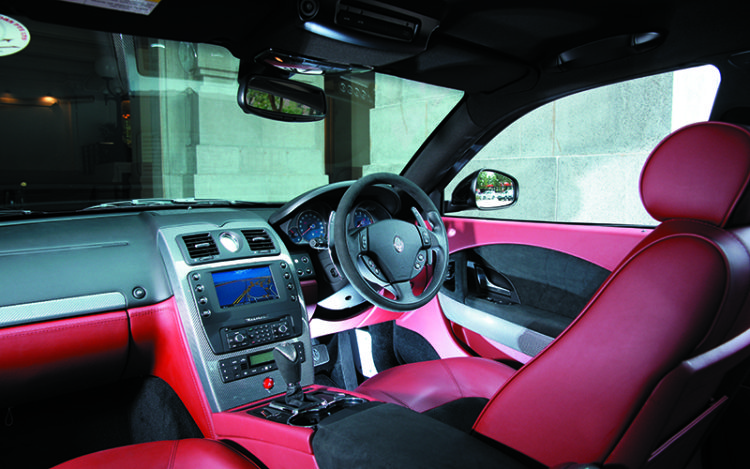 But it’s the shift paddles that really define the Sport GT S aspirations as the driver’s car among limousines. These metallic items each stretch nearly a third of the way around the steering wheel, making them extremely accessible. In the best of Italian saloon fashion, the driver’s perch is really a plump sofa disguised as a sport seat – impossibly supple and comfortable, yet uncannily supportive.

Seating in the rear quarters befits a car in this class, with plenty of opulent leather and room to pamper for the rare occasions when you choose to not take the wheel.

Plush as the Quattroporte’s cabin is, the Panamera’s blazes the trail when it comes to creating an ambience to set a man off on a driving mission. First off, it’s a strict four-seater. The arrangement came about from having to accommodate the transmission tunnel while setting the seats low. As a treat, the perches behind are essentially bucket seats, just like the ones in front.

The big channel that bisects the cabin not only partitions the cabin neatly into four sizeable cubbies, it also hosts a bank of switches. This is quite unlike what the other German marques have done, rationalising controls into a single dial.

Admittedly, mastering the rows of buttons surrounding the Panamera’s gear lever can be daunting on first acquaintance. But there’s no denying the layout’s sense of occasion. Matched with the five-dial instrument pack (a distinct Porsche trait) and the compact steering wheel that would look more at home in a nimble little Boxster, the driver’s quarters really feel like a bona fide cockpit. Of course, this being a car in the new PDK dual-clutch transmission era, the Panamera’s steering is equipped with the finger-boggling shift toggles. The more conventional paddles that debuted on the updated 911 Turbo (Dec 2009 issue) can’t arrive too soon.

Ironically, the Maserati, for all the ergonomic foibles that Italian carmakers have a reputation for, is easy to master; apart from configuring the trip computer, which is clumsily complicated. 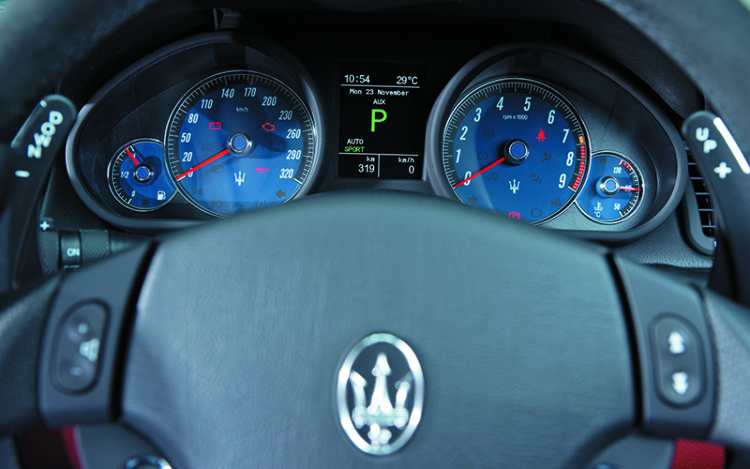 As the sportiest of the Quattroporte models, the Sport GT S places priority on being a sharp handler over being a plushy limousine (that’s the job of the Quattroporte S). So it does without the Skyhook adaptive suspension, relying instead on a fixed setting.

Damping is definitely firmer than the average limo’s, but the car’s generous wheelbase easily soaks up all hints of harshness. On top of that, it also exudes very precise body control. This accuracy is echoed by the steering and the result is a very flowing handling characteristic that’s a joy to exploit.

Complementing the very active handling stance is the engine and gearbox combo. The wet-sump 4.7-litre engine is tuned for strong low-end torque to handle the daily grind, but it obviously enjoys being strung out towards its redline, with a creamy power delivery right through.

Its performance is bolstered by the 6-speed automatic, which is faster and sharper-acting than in other Quattroportes, thanks to its MC-Auto Shift mapping. There’s even a built-in launch control feature and the box will actively blip the throttle during downshifts, adding to the car’s athletic persona. 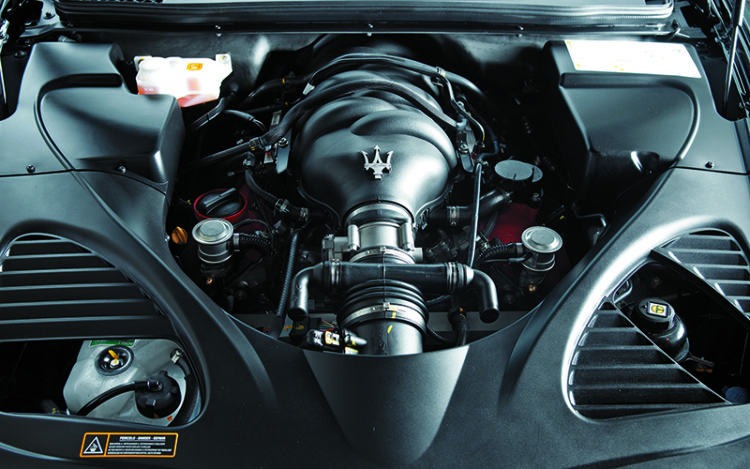 Amplified by the sports exhaust, the V8 has a loud and slightly high-pitched “voice”, not unlike the offerings from Ferrari which supplies the Maser’s engine. It’s hard to find a more sonorous performer with four doors.

After the Sport GT S’ rowdy song and dance, the Panamera 4S experience, even when tested with the optional sport exhaust, seems more subdued. That’s entirely relative because the Porsche’s  4.8-litre V8 will still out-sing and out-charm any regular limousine. 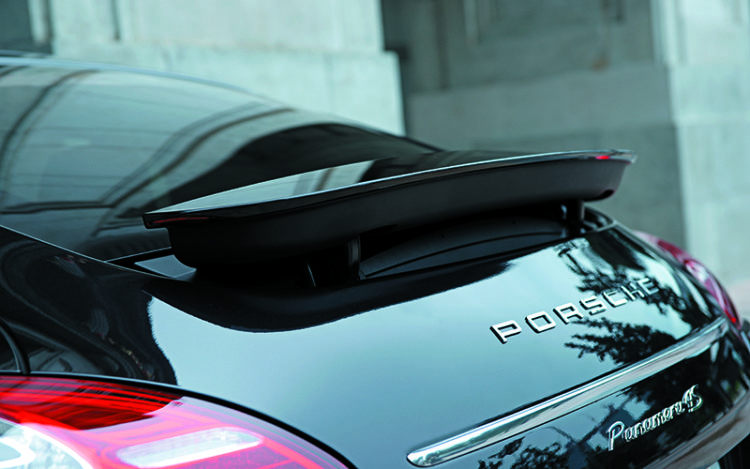 The PDK transmission’s seamless cog changes easily disguise the effect of the 400bhp available on tap. To experience the full gusto of the V8, the optional Sport Chrono Package option is a must, if only for the aggressive shifts in the Sport or the more extreme Sport Plus setting.

Suiting its “limo” role, the PDK, even in its most extreme mode, never reaches the same level of brutality as in the 911 or Cayman. As a bonus, the Chrono option also includes a dastardly effective launch control function that’s worth 0.2 second against the claimed 5 seconds. Never mind that you’ll probably never use it.

Bear in mind that the 4S is intended to be for the chauffeured set first, with the option to self-drive as a bonus. This helps explain why the ride is supple, even when the active suspension is set to its firmest. But while it certainly feels a bit cushy, the 4S’ absolute limits are arguably higher than the GT S. 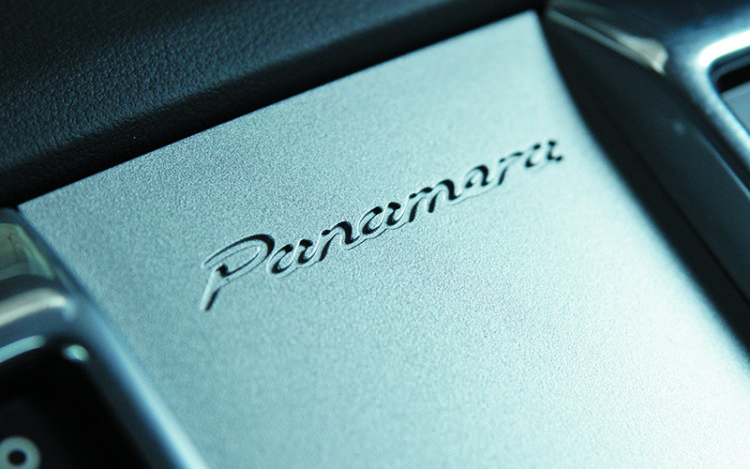 Operating between the clever all-wheel drive, the suspension geometry and the basic chassis set-up, the 4S is extremely capable at translating the driver’s wishes to the road succinctly, paying little attention to such distractions as its size or weight. It does this while feeding back strong assurances of grip and resolute poise. It shows just what technology can do.

In contrast, the Sport GT S feels more organic. Maybe it is its age showing or maybe it’s just the way Masererati had intended it to be. The GT S certainly cannot deny that it’s portlier and bulkier than the 4S. On more challenging roads, it certainly can’t “shrink” around the driver as much as the Porsche can. 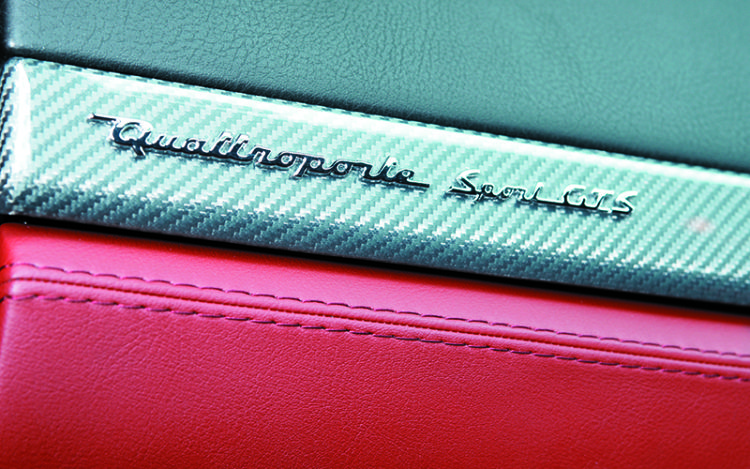 Elements like its engine and gearbox characteristics and the traditional real-wheel drive format also guarantee that a similarly skilled driver will have to work harder to keep up with the 4S. Mind you, the Porsche does this despite the slight power disadvantage. The 500bhp Turbo will surely dust the Sport GT S (but it’ll also cost a whole lot more, of course).

But kilometres covered per hour don’t equate to smiles with the distance covered. If nothing else, a quick tug at the downshift paddle to provoke the roar of that Italian V8 should do so… nicely. 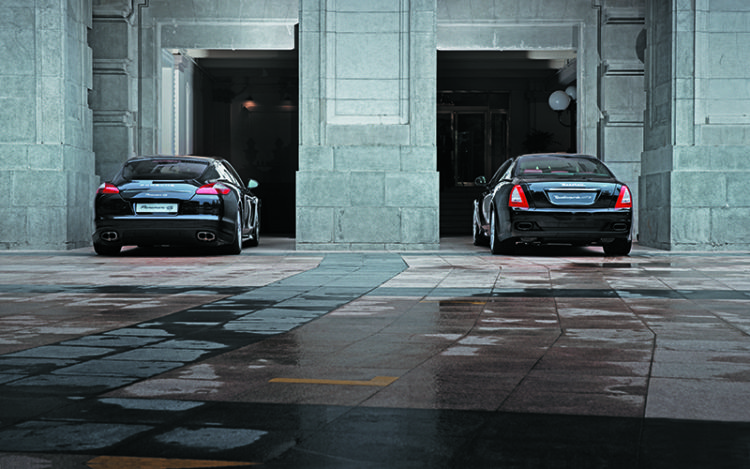