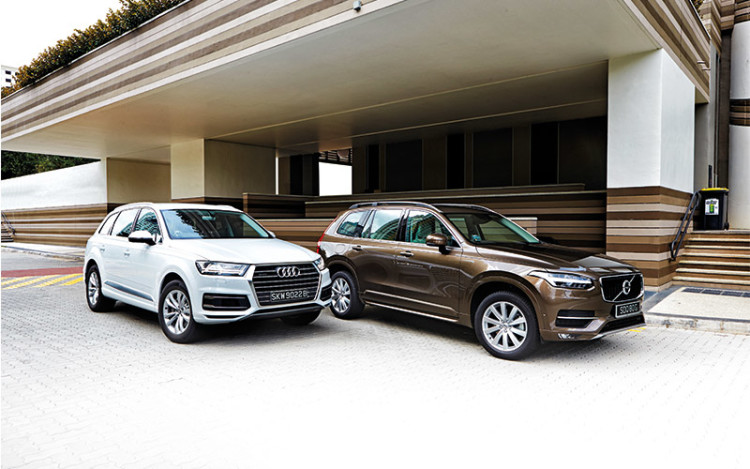 Ten years ago, the term “base model” had very negative connotations. It referred to the least expensive car in a carmaker’s lineup – the one with the lowest performance and fewest standard features.

These days, however, base models are relatively well-equipped, even when compared to their higher-end siblings. Getting an entry-level model from a premium brand no longer means ending up with a car that’s “all atas badge and no substance”.

These two contenders we’ve gathered here are the newest and arguably most competent seven-seater SUVs in their segment. The trophies under their respective belts are proof of this – the Audi Q7 and Volvo XC90 were named the “Best 3-litre Sports Utility Vehicle” and “Best 2-litre Sports Utility Vehicle” respectively at the 2015 ST-Torque Awards. The Q7 is newly available as a 2-litre, and is tested here.

It’s hard not be awed as you walk up to the Audi Q7. At over 5m in length, this vehicle is not only longer than the XC90, its length even rivals that of flagship saloons. Its road presence is further magnified by its chunky and muscular design. There’s nothing about the exterior of this Audi SUV that says “basic”. 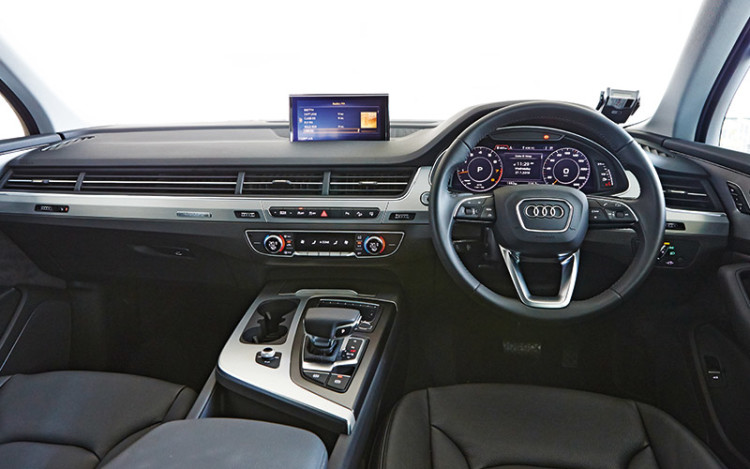 The Q7’s cockpit has a higher build quality.

The same is true for the Volvo XC90. Like its German rival, you can’t tell that this XC90 is the base variant just by gazing at it from afar. You’d have to spot the “T5” badge on its tailgate to know for sure.

Climb into the cockpit of this automobile and the only hints of its entry-level status are its smaller, simpler instrument cluster and the absence of a sunroof. And unless you’re a leather expert, you wouldn’t know that the upholstery is regular cowhide instead of finer Nappa.

The ginormous touchscreen that controls the infotainment and other vehicle functions is identical to the ones in costlier XC90 variants. This system, called Sensus, is also more intuitive than the Multi Media Interface (MMI) in the Q7.

One of the Volvo system’s niftiest features is the voice control function that lets you lower/raise the air-con temperature by saying “I’m hot” or “I’m cold”. Other standard amenities include four climate zones and adaptive cruise control. The latter function isn’t even standard on the top-end Q7 3.0.

Climb into the Q7 2.0 and the most obvious indicators that it is not the Q7 3.0 are the “missing” panoramic sunroof and analogue meters in place of Audi’s snazzy, all-digital virtual cockpit system. 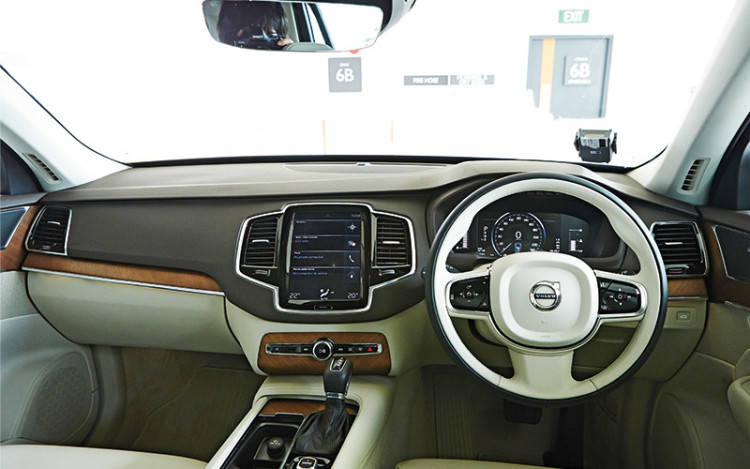 However, the Q7’s interior quality is superior to that of the XC90. The switches have a pleasing tactility and the knurled finish on the control knobs is a particularly luxurious touch.

More importantly, the Q7 is roomier and even more practical than the XC90. The Audi has larger storage points for knick-knacks, and more legroom in the second and third rows as well.

And the access to seats No. 6 and 7 is less tricky in the Q7 than in the XC90, because the former has a bigger gap for children (or petite adults) to squeeze through. 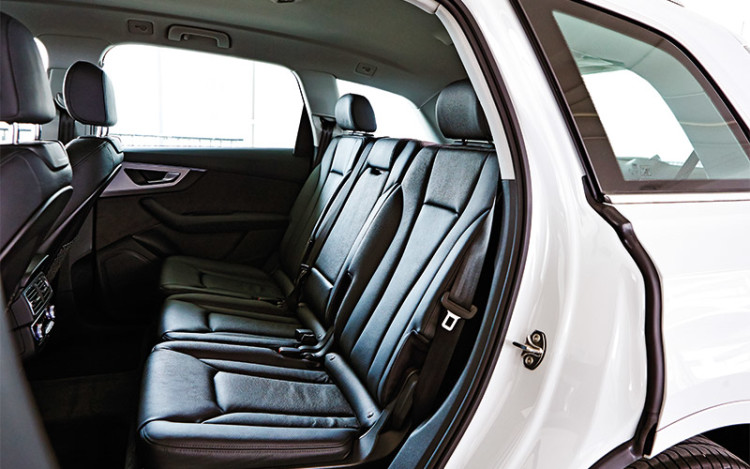 But when it comes to third-row comfort, the XC90 is marginally better because it has air-con vents back here. The Q7 offers no such amenity. Given our weather, third-row passengers in the Audi are going to be less happy than those in the Volvo.

The Q7, however, makes it easier for the driver (or head of the household) to switch between five- and seven-seater layouts. Thanks to the powered third-row seats, a button press is all it takes to stow/deploy the rearmost pair of seats. For added convenience, these controls are located in the boot area and “duplicated” behind the second-row bench.

It’s less convenient for the XC90 driver, who is either going to have to be fit or will become fitter, because the folding/unfolding of the third-row seats has to be done manually. It takes a bit of effort to accomplish this, especially if the driver in question is a parent with kids who happen to be screaming for attention. 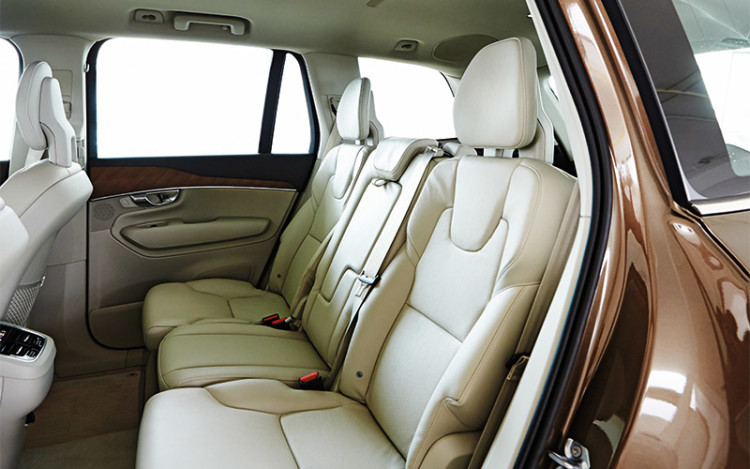 The XC90’s rear bench has a shorter squab for the middle occupant.

When it comes to driving excitement, it’s again the Q7 that leads the XC90. The Audi’s turbocharged 2-litre motor cranks out 252bhp and 370Nm, and romps the 0-100km/h dash in 7.1 seconds – just over a second quicker than the Volvo.

The Audi’s faster century-sprint time is primarily due to the fact that its kerb weight of 1975kg is 78kg lighter than the XC90’s. That’s one fewer “adult on board” at all times.

Working with the lighter weight to outsprint the Volvo is the Q7’s 20Nm higher torque. The XC90’s T5 engine is a bit more powerful (by 2bhp), but it’s the torque output, especially at lower revs, that really gets these huge cars going. 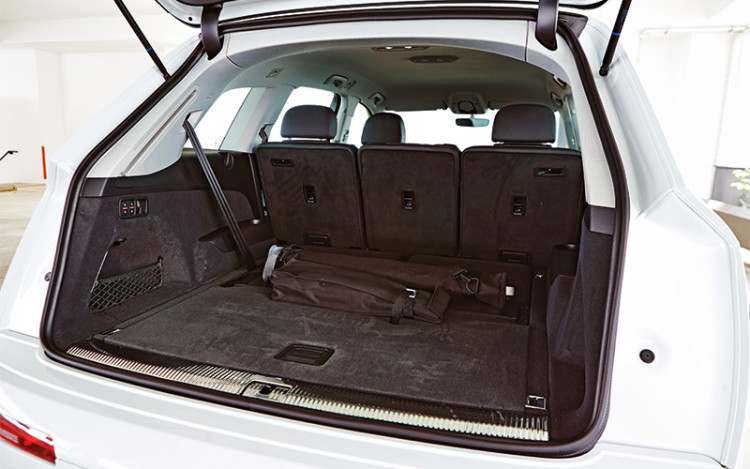 That said, the XC90 has more progressive power delivery than the Q7. Whether it’s moving off from a standstill or cruising down expressways, the Volvo’s more linear performance makes it more predictable.

The Audi displays palpable turbo lag when you nail the throttle – the turbocharger takes just a bit longer to spool up before the boost arrives. But when it does, the acceleration feels stronger than what the XC90 can do.

When it comes to handling, the longer Q7 feels surprisingly more manoeuvrable than the XC90. Whether you’re in a tight carpark or going round your favourite corners, the Audi is more hatch-like to drive than the Volvo. This is despite the fact that the 2-litre Audi is not equipped with air suspension and rear-wheel-steering, both of which are standard on the range-topping 3-litre Q7. 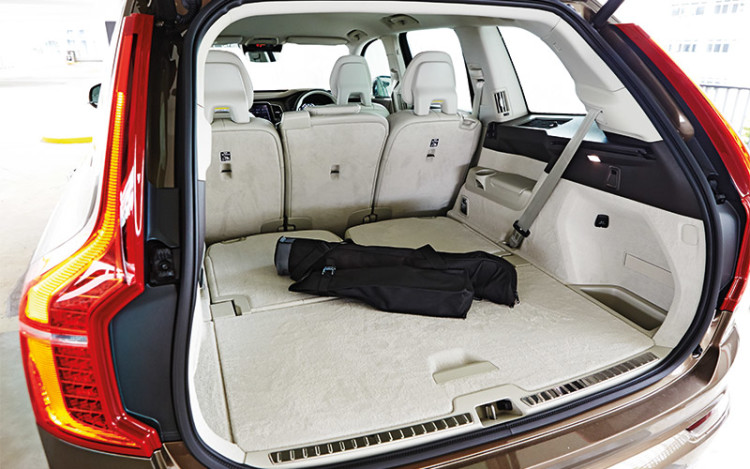 While the XC90 feels less hatch-like to drive, this automobile also happens to be more suited to road trips, thanks to its fantastic seats.

The Swedish carmaker is an expert when it comes to making seats, and the ones in the XC90 are tops in cosseting their occupants. Volvo really ought to consider establishing a division that manufactures office chairs.

Further adding to its long-distance motoring comfort is the aforementioned adaptive cruise control system. Said function operates seamlessly, automatically slowing down the vehicle when it detects cars ahead filtering into your lane.

The only bugbear with this system is that the speed settings can only be adjusted in 5km/h increments rather than 1km/h ones, which would have been even more useful.

Clearly, the Q7 2.0 is better suited to family men who do all their driving within Singapore and rarely venture across the Causeway, whereas the XC90 T5 is more suitable for families who enjoy road trips up north.

I could hardly call these two SUVs base models, except in terms of outright performance. In my opinion, both the Audi Q7 and Volvo XC90 offer more than just premium badging – each one has plenty of substance, too.