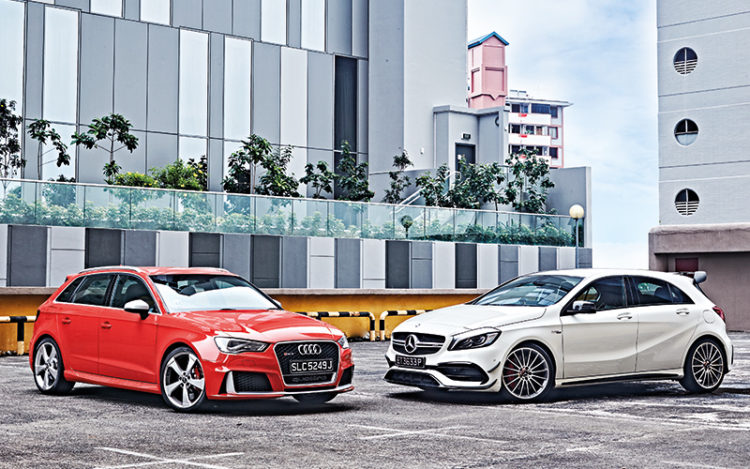 Dear neighbour, I apologise for waking you up at 6am. I had to go to work, as usual, but this time I drove one of the most antisocial hatchbacks ever made, Mercedes’ freshly updated AMG A45.

Not that it hasn’t earned the right to shout. No sooner had Audi’s RS3 ascended the podium as the world’s most powerful hatchback, AMG’s renewed A45 arrived with 381bhp and 475Nm to flick the Audi down a notch. This it achieves with a violently turbocharged 4-cylinder engine, against Audi’s unique 5-cylinder producing 367bhp and 465Nm.

Another technical distinction worth noting is the RS3’s centre differential, which has the ability to route 100 percent of torque to the rear wheels, whereas the A45 makes do with a maximum torque diversion of 50 percent.

Otherwise, these four-wheel-drive monster hatches are very similar in mechanical concept and, therefore, ripe for a nose-thumbing game of Top Trumps.

Audi’s RS3 looks purposeful and handsome, like all A3s do. Next to the A45, however, it is a paragon of restraint, apart from the unusual orange paintwork of our test car. 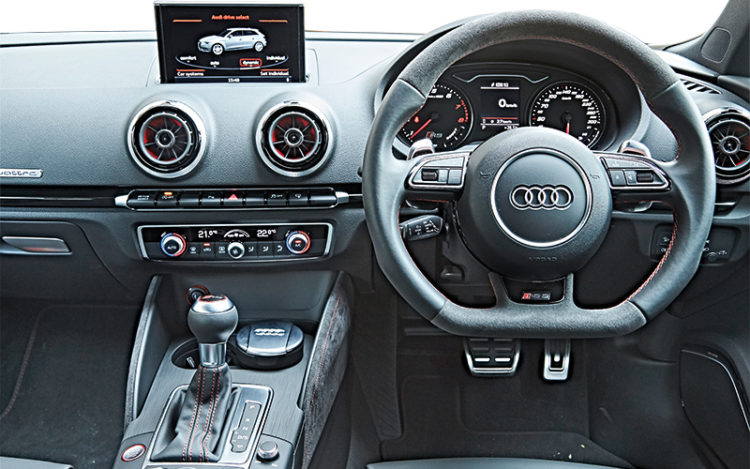 To my eyes, the A45 looks like an angry puppy. The little, yipping type that will never shut up. I don’t mean that in a bad way, for in the A45’s wedge-shaped, shoe-like silhouette and squat stance lies the suggestion of energy bubbling over, waiting to be unwound.

The AMG straddles the line between cuteness, with its myriad “Hot Wheels” aero appendages, and teeth-baring ferocity. Even the casual observer will have absolutely no trouble telling that this is not your garden-variety A180.

Expect a similarly aggressive atmosphere inside the Mercedes and you’ll not be disappointed.
Inevitably, carbon fibre abounds and red accents are everywhere. AMGs come endowed with red-ringed air vents and a satisfyingly sculpted gearlever in the centre console, as opposed to a stalk on the steering column.

The speedometer is graduated for serious speeds, so in sunny Singapore, you’re unlikely to use more than a quarter of that meter.

Most functionally significant, and newly specified for the 2016 model, is a rotary dial that allows you to cycle through the A45’s drive modes in a single motion. 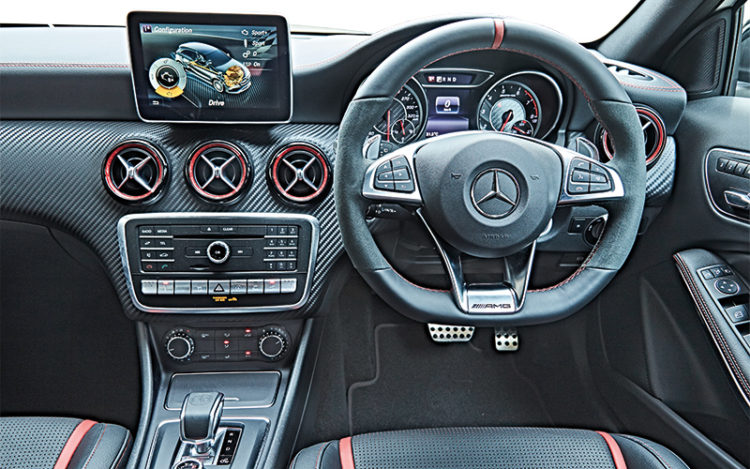 A45 cockpit has a racier design and sportier front seats.

All these flourishes risk vulgarity, but are perfectly appropriate. In fact, the A-Class looks like it was born with the AMG’s go-faster bits and then had them plucked out to make the regular versions.

This is a rare instance where a particular model, what with its tiny windows and chunky one-piece sports seats, appears to be more natural in its most extreme, souped-up form.

A different, and calmer, environment is to be found in the RS3, which does not stray too far from the aesthetic of ordinary A3s.

It’s an extremely classy place to be in, hints at the RS3’s high performance potential are there if you look for them, and the orange inserts within the air vents are playful yet tasteful.

Just don’t stick your fingers into them, because you’ll realise they’re not much more than flimsy plastic pieces. 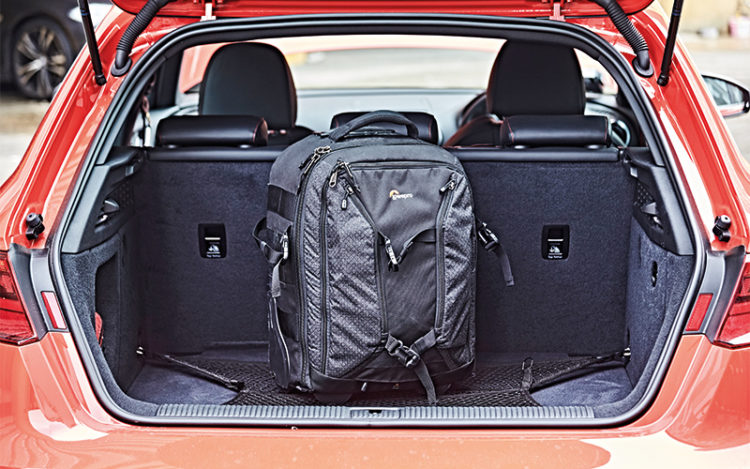 Audi’s solution for cycling through drive modes – a little toggle on the dashboard sharing space and appearance with the audio controls – is not as intuitive as Mercedes’ knob.

I usually start off in the soft settings, then work my way up. In the A45, however, it seems appropriate to go straight to S+ and begin scaring elderly ladies.

The thick, Alcantara-rimmed steering wheel feels great in the hands, but is completely devoid of feedback. This is despite the chassis doing its best to communicate the exact shape of every single lump on the road. The A45 regards said lumps as personal enemies and encounters them with such unyielding resolve that you’ll pogo between rapidly encountered road imperfections.

The car’s Comfort mode makes a mild attempt to chamfer the worst edges of the A45’s fiery attitude, but the RS3’s single setting is always more honeyed.

With the A45 paused at a traffic light, the dashboard and steering wheel constantly vibrate to convey the drivetrain’s annoyance at being made to do something as mundane as commuting. The frenzied A45 never stops hitting you over the head with the need for speed. 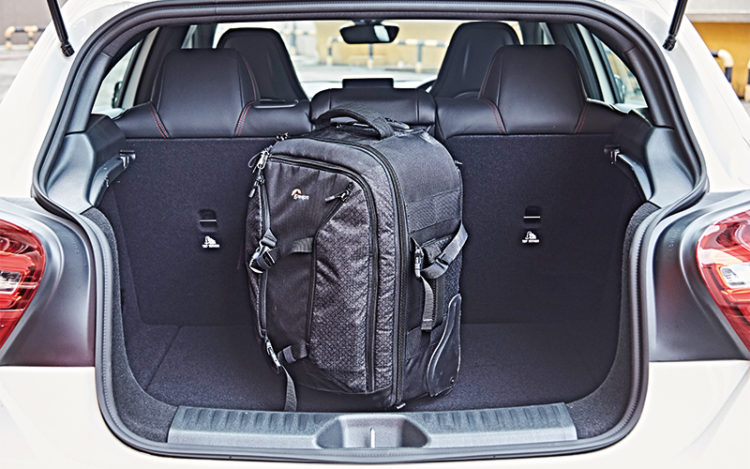 Tasked to tool around town, the AMG grumbles with impatience, demonstrating that while Mercedes can do ultimate serenity in the S-Class, the automaker doesn’t shy from delivering kicks up your backside.

Then you encounter a good stretch of empty, winding road. There is very little to fault about the A45’s dynamic ability or, for that matter, its character.

The sheer raucousness involves you wholly in the experience.  The car comes alive, the road comes alive, and you are filled with tingly excitement, enough to make you actually laugh out loud.

Initial impressions of a steering petulant enough to vibrate at idle, but which refuses to communicate real information, is banished by the realisation that it is perfectly weighted and scalpel-accurate. You actually come to appreciate not having to wrestle kickback to maintain your line.

The grip is astounding, and even full-bore throttle mashes do not overwhelm the 19-inch tyres. The A45 is utterly riveted to the tarmac when tossed about, and there is an incredible solidity to the chassis, with no part of the vehicle straining against another.

The A45 manages that physics-defying trick of feeling like the car is its entire centre of gravity, instead of pivoting around a point. There is none of that “balancing the front and rears on the throttle” nuance, and so it offers a more one-dimensional driving experience than, say, the BMW M2.

But which sane person drifts on a public road? When the AMG is so instinctive and so loud, and corners with such ludicrous alacrity, I promise you that it’s no less absorbing.

The A45 exhibits such confidence on its feet that, through a series of rapid bends and despite the massive amounts of power, you can eschew the usual fast-driving cornering routine. Instead of needing to brake straight and tiptoe through before powering out, you may employ a simpler and jollier foot-on-the-accelerator-throughout technique.

I found myself hurling steering lock and calling for instantaneously rewarded power whenever I wanted. Naturally, that’s only possible because I was well within the dynamic limits of the car, but those limits are so far beyond legality and my courage anyway that they might as well be infinite.

What, then, of Audi’s challenger to the crown of most bonkers hatchback? 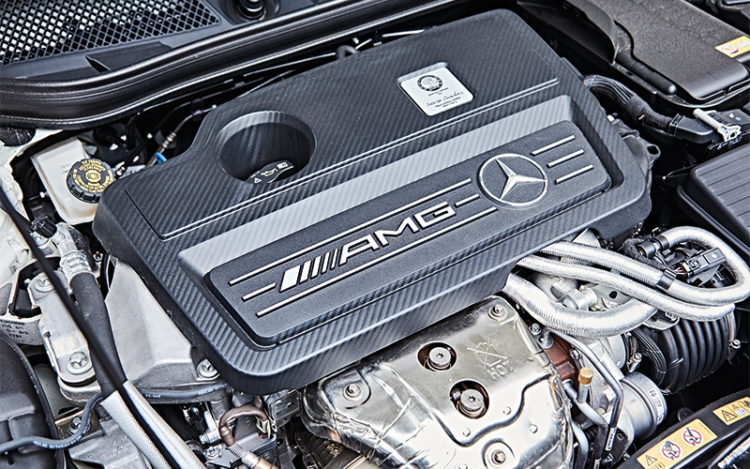 To be frank, you would not accuse the RS3 of being less planted or slower from point to point. In fact, bombing down a twisty road, much of the ample pleasure comes from marvelling at the nonchalant capability of it all, while revelling in the Audi’s soulful noise.

There is just a minuscule softness to every interaction vis-a-vis the A45, which means the RS3 doesn’t quite come alive in the corners like its rival does. It’s the minute difference between complete satisfaction and the wholesale ignition of all your nerve endings.

Audi’s super hatchback also suffers from a hint more body roll, which is almost impossible to detect in the A45. This makes you aware that you are, in fact, still in a vaguely cuboid object with mass. The A45 can, if you allow the suspension of disbelief, make you feel like you’re piloting a mouse cursor. 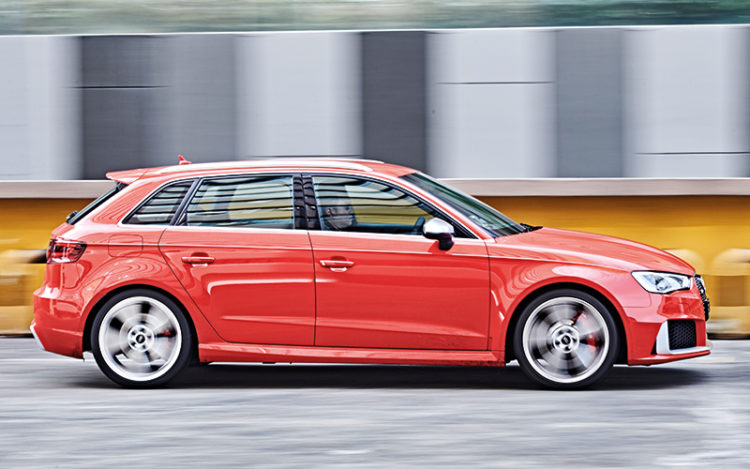 Ultimately, it’s hard to deny that the A45 is sharper. Is the Audi anodyne though? Heavens no. You cannot, in good conscience, call something this fast, accurate and with such a brilliant powertrain, boring.
That 2.48-litre 5-cylinder is the RS3’s glorious trump card.

The Mercedes motor makes more power on paper, and extracting 191bhp per litre out of an engine is a grand achievement. Yet, as anyone who has tried singing at the top of their lungs will tell you, it can feel like it’s stretching to deliver its bombastic output

As the saying goes, there’s no replacement for displacement, and the RS3’s engine is a wonderfully polished and endlessly delightful sojourn into a creamy, elastic world. 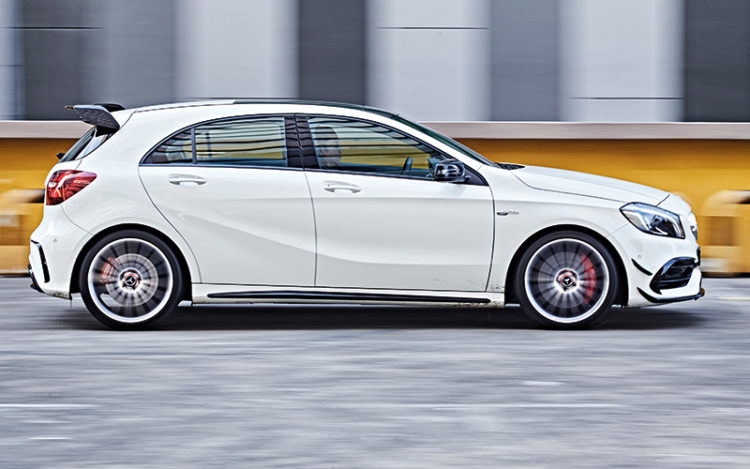 As a family hatchback, the A-Class was always compromised. But as an angry, snorting little devil, ah, suddenly it all comes together. It is unerringly and properly hilarious.

The same drawbacks continue to exist, but in the most bellicose incarnation of the A-Class, those drawbacks are part of the charm.

For all its undeniable ability, the RS3 has been made to go like a very fast A3. Audi deserves immense credit for making a hugely capable Sportback that runs the A45 close while remembering its primary job of being pleasant transportation, which it does much better than the AMG.

Still, there’ll be punters (such as those who buy the A45 as a second car) who give Mercedes-AMG even more credit for setting out to create, first and foremost, a firecracker. At this, the A45 is peerless. 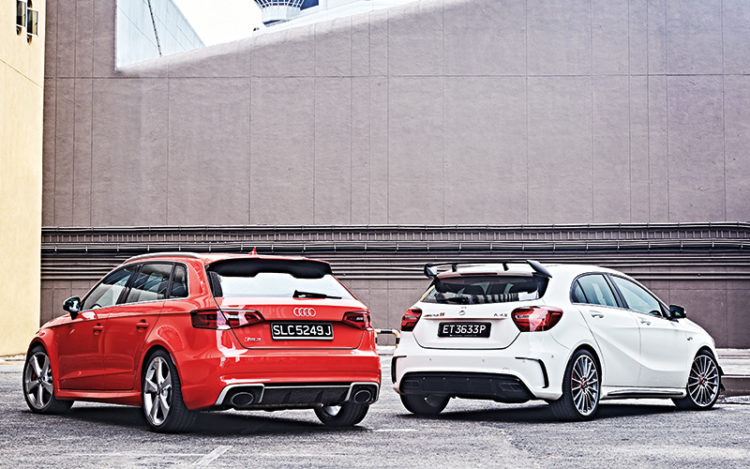