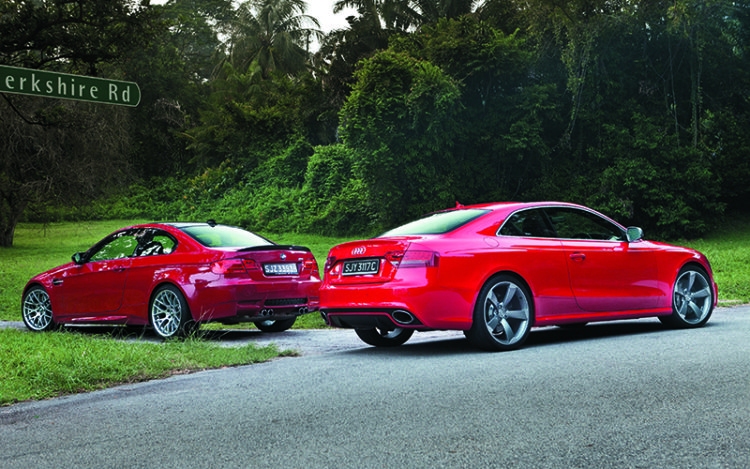 This one-upmanship extends to the Audi’s styling, too. The M3 has subtly flared arches, a bonnet bulge, a deep front air dam and quad tailpipes to signal its intent. The RS5, on its part, takes in-your-face aggression to new heights with even fatter fender blisters, immense air intakes distending the outer extremities of the front bumper, a silver front splitter, and a pseudo-diffuser flicking upwards under the rear bumper, punctuated by a pair of bazooka-sized exhaust tips. 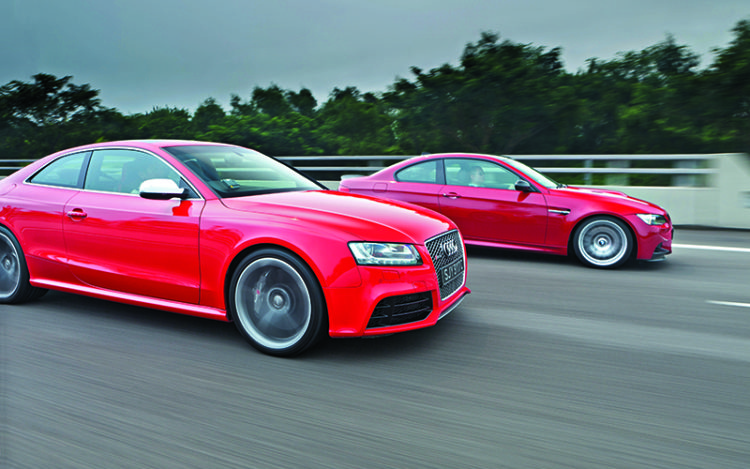 The M3 has a subtle lip on the trailing edge of its boot lid, the RS5 has a full-scale wing rising into the airflow at speed. The RS5 even outposes the M3 on footwear, with the Audi’s optional 20-inchers shading the M3’s standard 19-inchers. The gauntlet has been clearly thrown down.

And the M3 has unhesitatingly picked it up. Its riposte is the Competition Pack, now standard-fit on all M3s (saloon included) sold by authorised distributor Munich Automobiles. It boasts firmer, lower (by 10mm) suspension, revised electronic damper control and differential/traction control settings, and bespoke 19-inch rims (styled like the near-iconic items from the E46 M3 CSL). 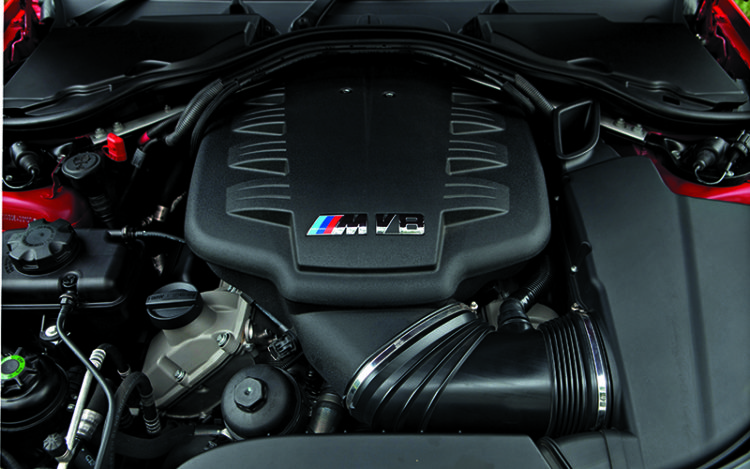 Both cars have electronically controlled dynamic settings the driver can customise with the stab of a button. The RS5’s Audi Drive Select system allows you to adjust steering weight and engine/gearbox mapping, and if you’ve specified your car with the optional adjustable dampers, Audi Drive Select will allow control of them, too. 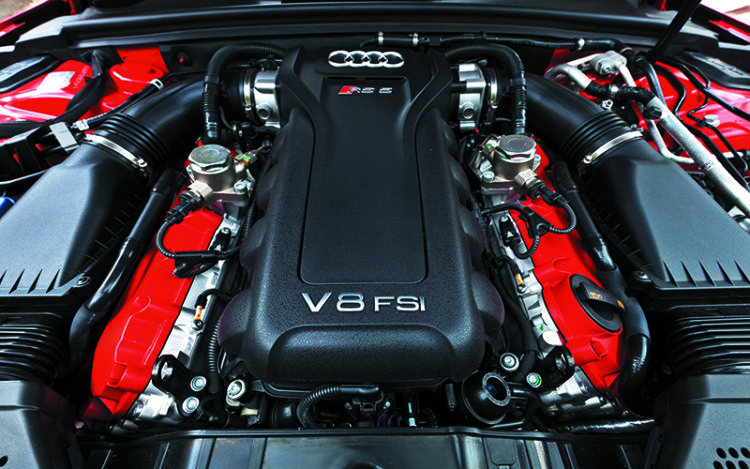 The M3 lets you vary more aspects of its dynamics – throttle response, traction control/differential, dampers, steering and gearbox can all be tailored. And each is adjustable to a far greater degree than the Audi where applicable. For instance, you can choose from six different levels of gearchange ferocity, whereas in the RS5 you only have two (three, if you include the Auto mode where the car figures things out itself). 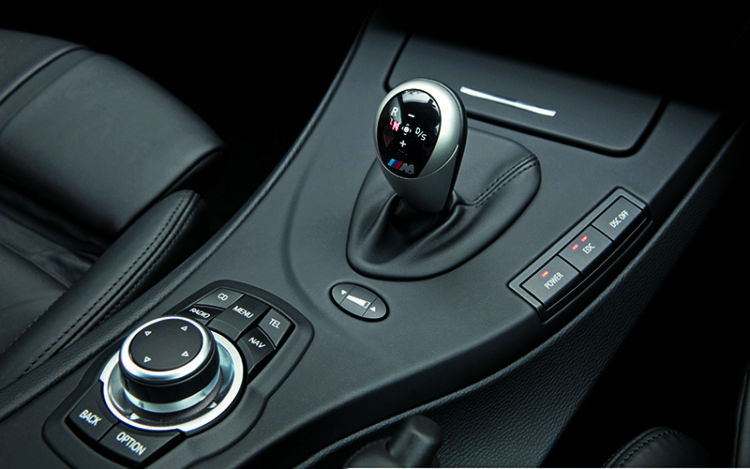 To top it off, the M3 allows you to adjust each function without affecting the others, which cannot be done in the RS5. Practically, this makes a big difference. Say you’re belting along a smooth road, which suddenly gets slightly bumpy. In the M3, you can press the EDC switch to soften the ride, while leaving throttle and gearbox in their most aggressive settings. In the RS5, if you hit Comfort to ease the ride, the steering, engine and gearbox all switch to granddad mode, too. 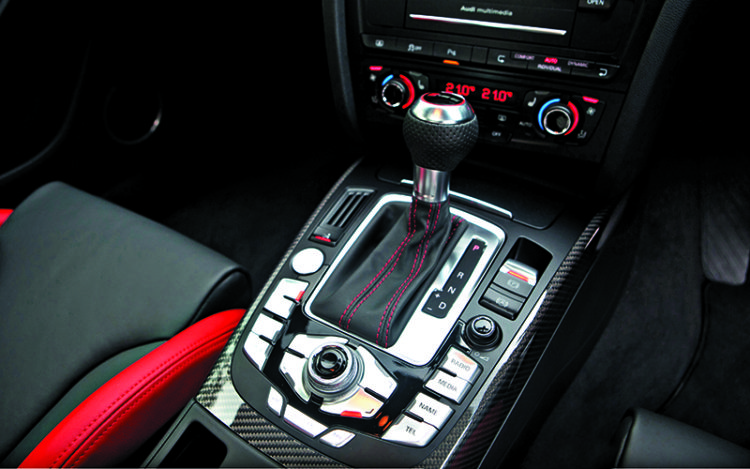 Both cars feature engines brilliant in their own right. The M3 fires up with a sharp bark, settling into a purposeful, slightly busy purr, full of intent. But starting up the RS5 is more of an event. It wakes with a rumble, its distinct V8 pulse leaving you in no doubt as to its cylinder count and just begging you to blip it. And when you do, there’s the most delicious hardening of that throbby V8 note as the revs flare. Switch the engine setting to Dynamic, and the sound becomes more pronounced. 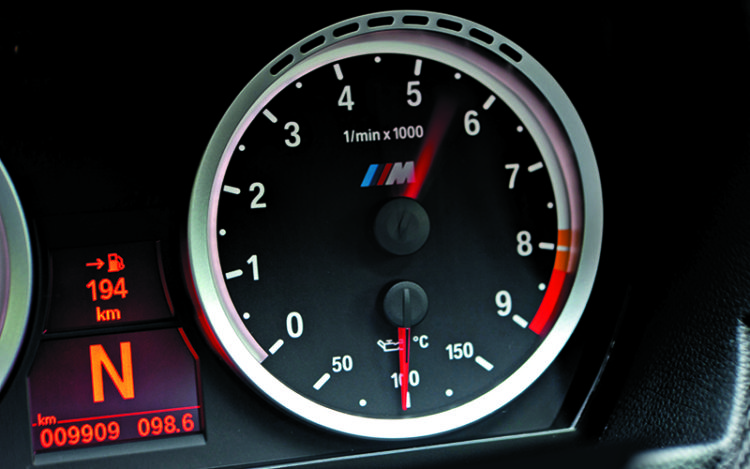 If you want the absolute in aural theatre, spec your RS5 with the optional sports exhaust, and you’ll be treated to the most stirring, Nascar-like burble every time you start up. It sounds, and feels, like a bruiser.

And the RS5 drives like it sounds, full of deep-chested urge as soon as you move off. It delivers belting acceleration without you needing to extend the engine, but when you do rev it to its 8500rpm limit, you’ll find even more punch at the top end. 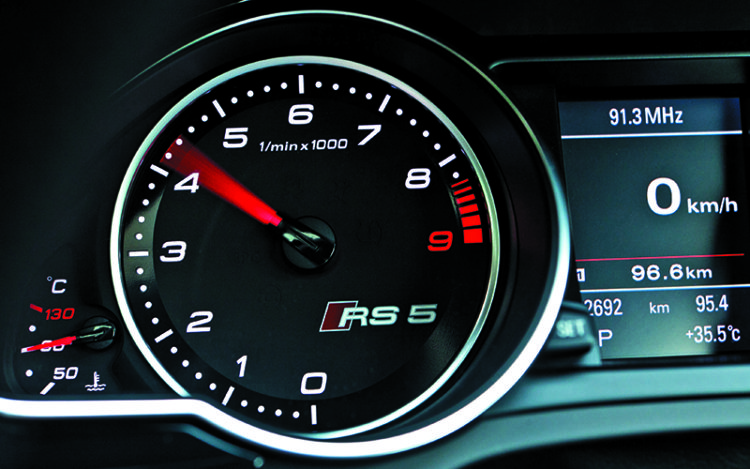 The M3 doesn’t have the low-end grunt of the RS5, but makes up for this with sharper throttle response and a high-rev delivery that’s nothing short of spectacular – both in the ballistic acceleration that erupts, as well as the spine-tingling snarl as the engine homes in on its 8400rpm redline. Audi and BMW both claim 0-100km/h sprint times of 4.6 seconds for their mounts, but subjectively it’s the M3 I would put my money on in a head-to-head drag race. 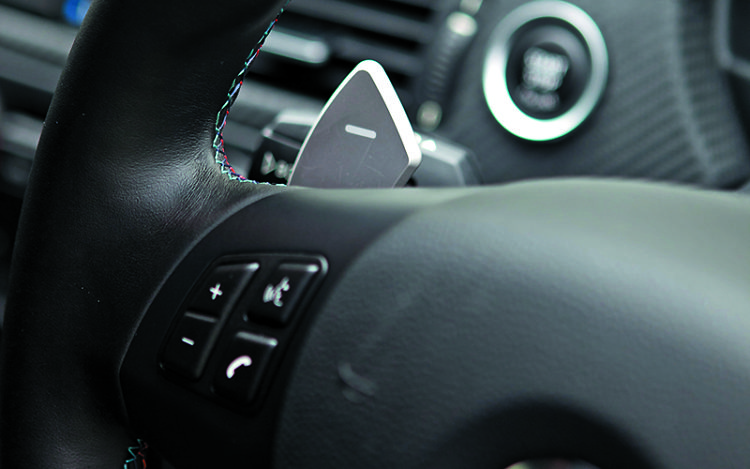 Both cars flaunt paddle shift-equipped 7-speed dual-clutch gearboxes, but even here they are distinctly different. The M3’s unit is more highly strung, hanging on to each gear longer, even with the gearbox in its gentlest setting. The RS5, on the other hand, shifts up at the earliest opportunity, unless the engine/gearbox setting is in Dynamic mode. 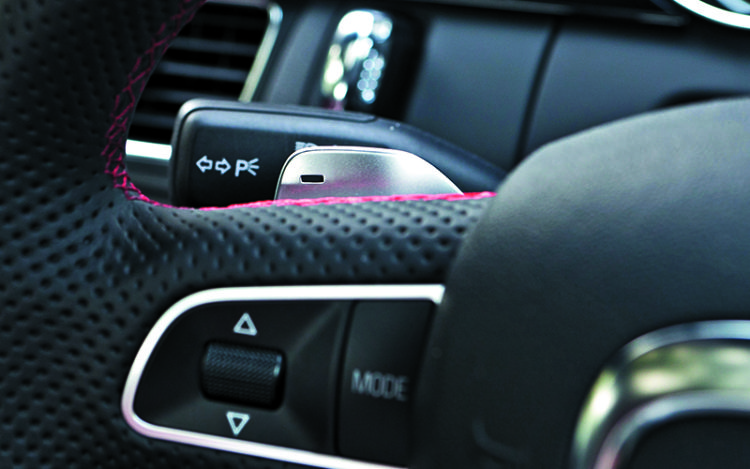 The RS5 also has longer legs, with top gear being an overdrive, making it a more relaxed cruiser as you waft along on the ample torque. The M3, in contrast, has closely stacked ratios that allow full access to that remarkable top end – even seventh gear is short enough for appropriately quick high-speed response. On a full-throttle acceleration run, the BM V8 whips to its limiter with such ferocity, you find yourself having to grab the next gear much sooner than you’d anticipated.

The RS5’s gearchanges are instantaneous and seamless, allowing the car to accelerate in one uninterrupted blast. The M3’s ’box feels more mechanical – you can hear it working, with some chuntering and other mechanical noises filtering through, and its gearchanges are more discernible, particularly at high revs where there’s noticeable shift shock as you fire through each gearchange. But if anything, this serves to emphasise the speed of the change and actually heightens the intimacy of the car-driver interface.

The M3’s ride is tensed and nervous, with a firm, busy character even with the dampers in their softest setting. It’s civilised over small-amplitude surface imperfections, but gets quite unsettled over bigger bumps – like it’s run out of suspension travel. There are four levels of damping on offer, and in the two firmest settings the M3 is clearly more at home on track than in town. On less-than-perfect roads, it’s best to leave it in Comfort or Normal, even when you’re belting it. 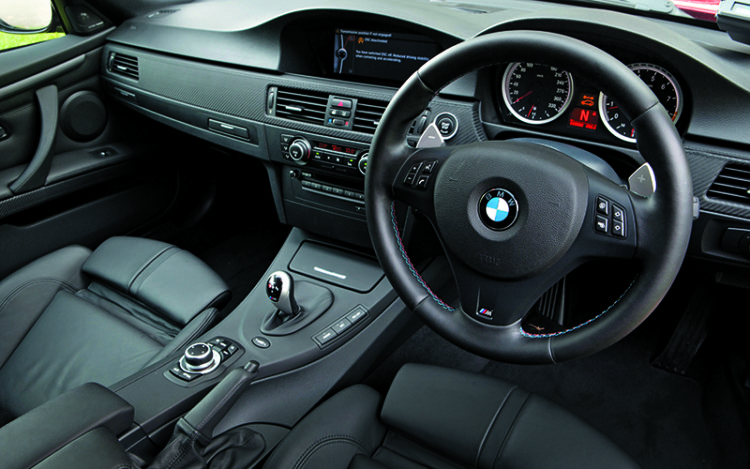 Stiff ride aside, there’s also more road noise filtering into the M3’s cabin than the RS5’s. But the RS5 isn’t a magic carpet either, especially with the optional 20-inch rims on our test car, which look great but introduce a degree of harshness not present with the stock 19-inchers. It isn’t as badly affected by larger bumps as the M3, though, so overall the RS5 proves more at ease if you’re wafting about town and not gunning for a lap time.

The trade-off is in the steering response. The M3’s helm is highly geared, incredibly sharp and it delivers greater feel, allowing you to edge the car into a fast bend with millimetric precision. In this regard, the Competition Pack has made a big difference. A non-Comp Pack M3 sampled previously offers nothing like this degree of response and precision. 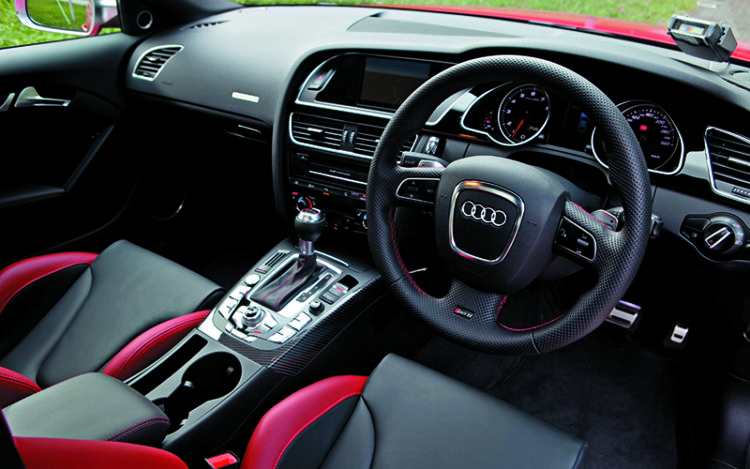 Step into the RS5 and it immediately feels more blunt. The steering is lower geared and lacks the M3’s razor-sharp initial turn-in; indeed, on tighter bends you find yourself having to apply more lock than expected. Switching the steering to Dynamic doesn’t help, either – it just becomes heavier without any corresponding increase in immediacy.

Both cars are very planted through bends and inspire great confidence, but the M3 has more front-end bite, its nose remaining pinned to the line whereas the RS5 starts to edge wide at really high speeds. 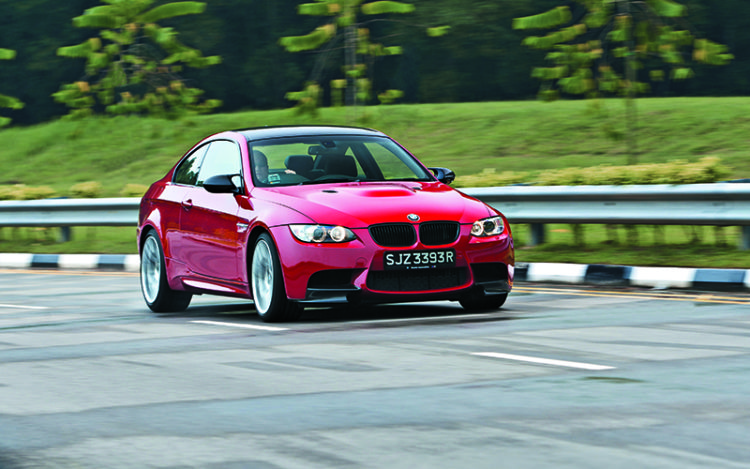 The M3 also has the more mobile tail, being rear-wheel driven, with the back end swinging out quite readily under power when exiting tighter bends. Ordinarily, the traction control would quell such antics, but apart from its On/Off setting, the M3’s DSC has an M Dynamic mode which allows an amusing degree of rear slip before it intervenes. The RS5 is hugely able, too. Boot it out of a tight bend and traction is total thanks to all-wheel drive, whereas in the M3 you have to be more judicious with the throttle as you feel for grip and modulate power to keep the rear in check. 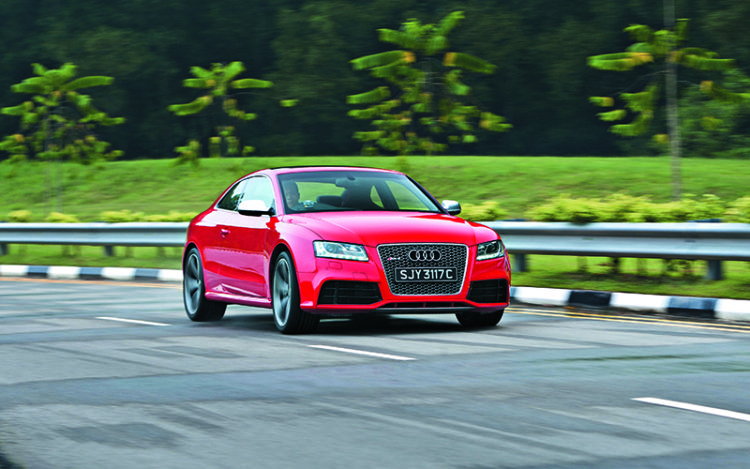 The RS5’s drivetrain already has a degree of rear bias dialled in, but there’s an optionally available Sport Differential for the RS5 that allows a greater degree of controllable slip when powering out of bends, to the extent the vehicle might almost feel rear-driven. The M3 still feels purer and sharper at the limit, but the Sport Diff adds an extra dimension of playfulness to the RS5’s behaviour.

So, which of these titans wins? The RS5 is newer, visually more exciting, and has a better-looking, higher-quality cabin. It matches its looks with a muscle car soundtrack and immense grunt from its mighty V8, and thanks to quattro, has the traction to deploy every ounce of its output. The RS5 is also the more able cruiser, the easier to waft around in, and indeed the more complete car. 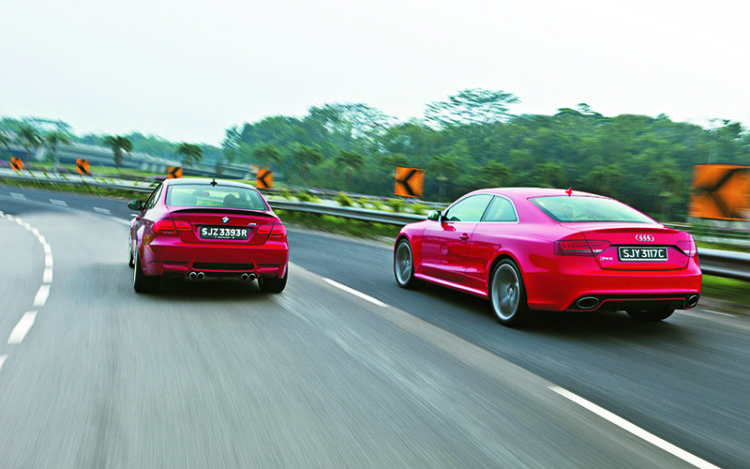 But the M3 is clearly the more focused driving machine, especially with the now-standard Competition Pack. It’s less comfortable and refined than the RS5, but it also sounds more spectacular and goes even harder than the RS5 at high revs. Importantly, it is also a tad more precise and involving, and for the red-blooded enthusiast, that just tips the scales in its favour. 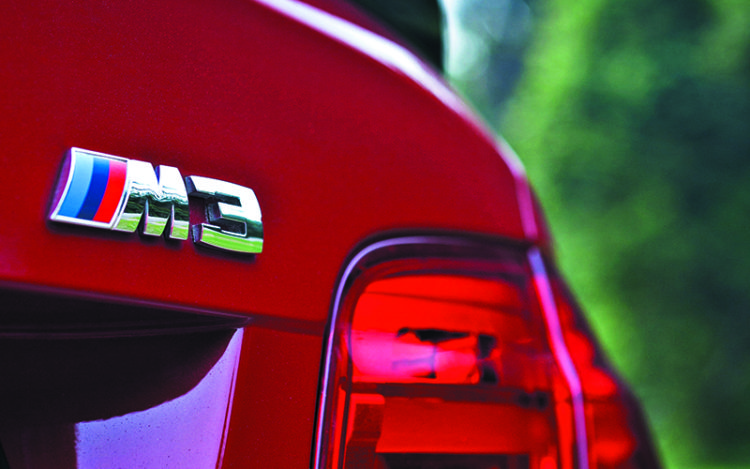 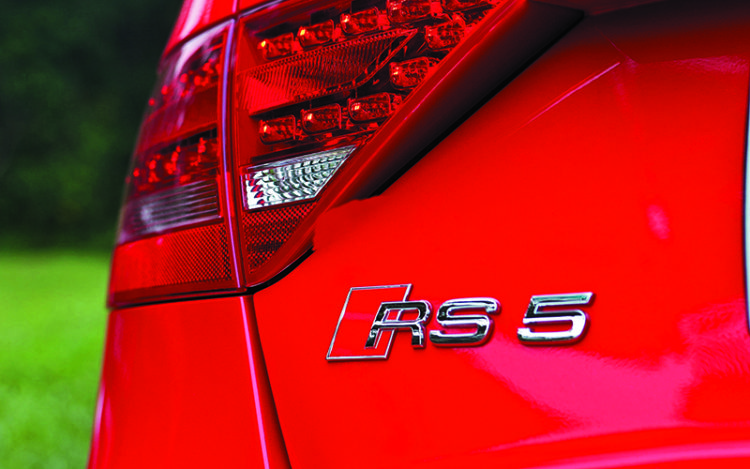