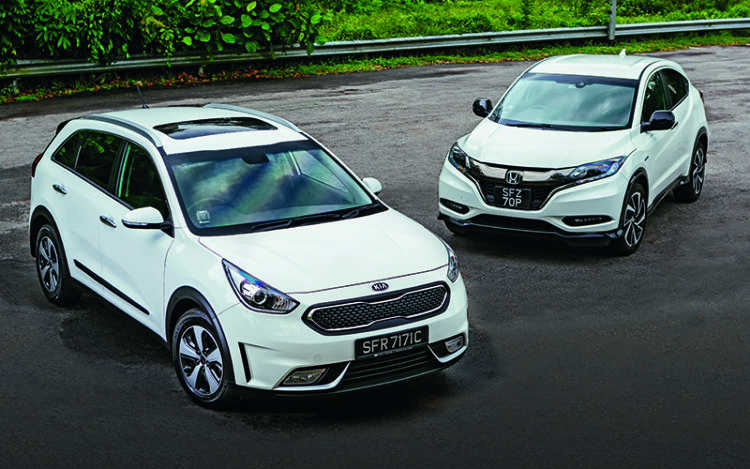 This pair of compact hybrid SUVs from Honda and Kia are well-equipped to tempt prospective buyers who want a fuel-sipping ride that doesn’t scream “Boring!”.

These similarities aside, the Honda Vezel Hybrid and Kia Niro are mutual rivals with different advantages and characteristics.

The hybrid version of the Vezel is equipped with a 1.5-litre 4-cylinder engine mated to a 22kW electric motor, giving a total system output of 150bhp. And a 7-speed dual-clutch transmission has replaced the CVT (continuously variable transmission) of the regular Vezel. 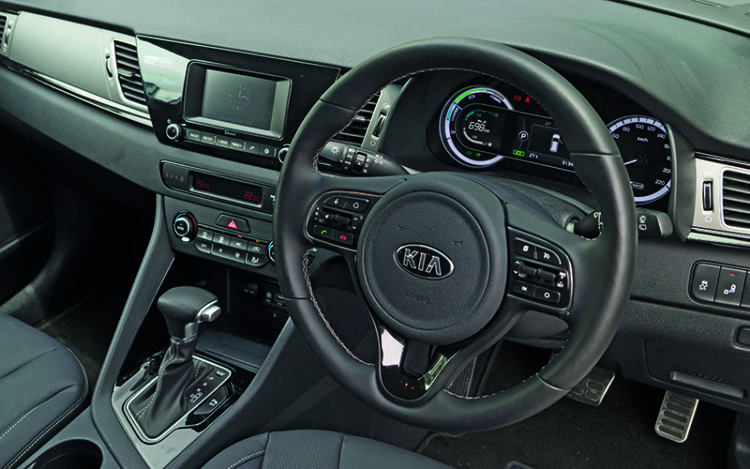 Both cockpits have useful gadgets and interesting hybrid-related infographics, but the Niro’s cockpit is more foolproof than the Vezel Hybrid’s.

The Sport Hybrid i-DCD drivetrain is said to produce 155Nm, but Honda Japan doesn’t mention the system’s total torque output. There is no official 0-100km/h timing either, but according to my G-Shock, the Vezel Hybrid does the century sprint in about 10 seconds.

The Kia Niro is powered by a slightly bigger 1.6-litre 4-cylinder engine with a higher-power (32kW) electric motor. The total system output of 140bhp is lower than the Honda’s, but there is 265Nm of torque. That instantaneous Korean torque and the stronger electric motor can provide an acceleration advantage in urban traffic conditions.

Driven back to back with the Vezel Hybrid, the Niro feels more eager off the line and also stays in its motor-driven mode longer/farther, whereas the Honda will only operate as an electrically driven car with very light throttle application.

Once up to expressway speed, though, the Vezel feels more responsive, especially during overtaking manoeuvres.

In terms of overall powertrain performance, the Niro gets the nod from this petrolhead. And the same goes for the balance between ride and handling. 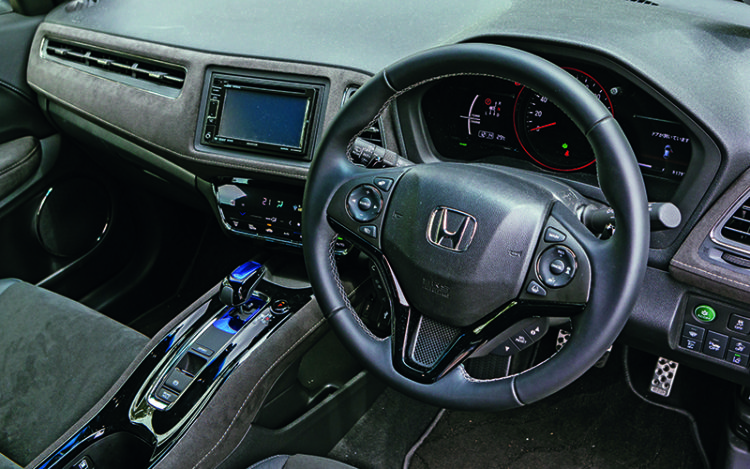 The Kia’s ride on its 205/60 R16 tyres is both pliant and composed, whereas the Vezel (in RS specification as tested) has an unnecessarily busy ride, which is due to the firmed-up suspension with 18-inch wheels and 225/50 R18 tyres.

Yes, there’s a positive effect on the Vezel’s steering response, but even so, there’s little to separate the Honda from the Kia in cornering ability. The Honda doesn’t ride badly, but it’s stiffer than the Kia when traversing the tarmac.

That being said, both cars are equally quiet on the move, with hardly any engine din or road noise disturbing the occupants.

The Vezel pummels the Niro when it comes to interior design and quality. The Kia’s cabin seems to have been built to a tight budget, with the fit-and-finish definitely a notch down from the Honda’s cabin.

To be fair, the Niro’s leather-trimmed interior isn’t terrible (and is equipped with a sunroof), but it clearly isn’t as nice as the Vezel’s, which comes with plenty of leather and suede. 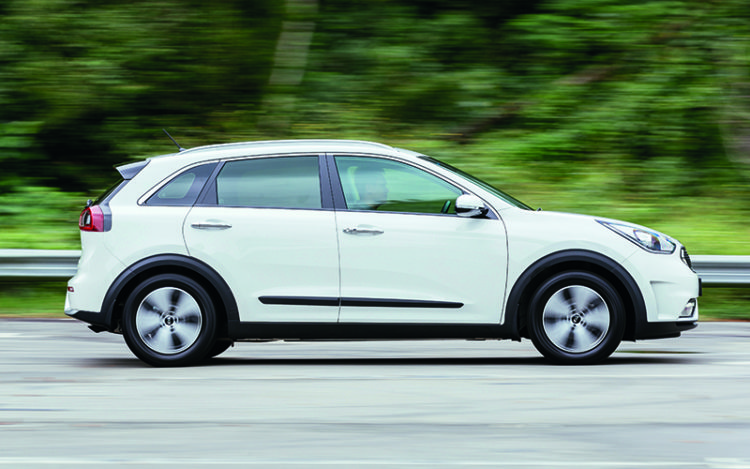 One downside in the JDM (Japan Domestic Model) Honda is the kanji used for the trip computer and driving assistance system. You’ll need to do some YouTube research to figure out the numerous functions. The Vezel’s analogue instrument cluster is otherwise legible and user-friendly, without trying too hard to look high-tech.

The Niro’s high-technology touch is a built-in inductive charging pad for your smartphone. The Kia also has heated front seats, which are as redundant here as those in the Honda, but the Kia’s seats provide a cooling function as well, which is more sensible in the Singapore context.

Both cabins have similar levels of space and utility, with similarly versatile split-fold cargo capacities (427 litres in the Kia and just over 400 litres in the Honda). But the Vezel feels more special, especially from behind the wheel. Incidentally, the driving position is more SUV-ish in the Vezel and lower, more car-like in the Niro.

In the style stakes, the Vezel beats the Niro, easily. The Vezel’s lines are 21st-century crisp without being overstyled, and the design is trendier than the Kia, whose styling is somewhere between conservative and dowdy. The Vezel’s easy victory in aesthetics is made even easier by the RS-spec side skirts, front/rear valances and LED foglamps. 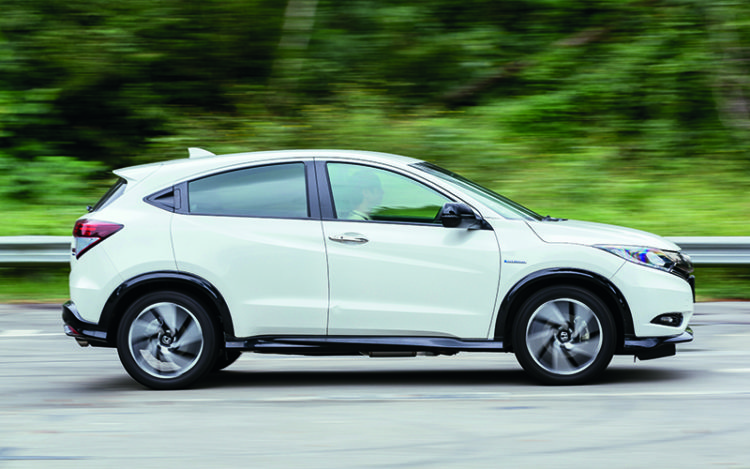 It’s a harder battle when comparing the two cars’ standard kit, but the Vezel prevails with Honda Sensing, a suite of eight active-safety features which include Collision Mitigation Braking System (to help brake the car when there’s a risk of collision with a vehicle or pedestrian in front) and Lane Keeping Assist System (to help keep the car within its traffic lane). The Niro’s active-safety gear is limited to Blind Spot Detection and Rear Cross Traffic Alert.

In theory and on paper, the Vezel Hybrid is even more fuel-efficient than the Niro hybrid – Honda claims 27 kilometres per litre in Japan’s JC08 cycle.

But over my three days and nearly 500 kilometres with both hybrids, the Vezel averaged about 18km per litre, versus the Niro’s 20km per litre. Therefore, the Korean is the real-world fuel economy champion in this contest.

It’s tricky comparing prices when one car (Niro) is an official model sold by the authorised agent and the other (Vezel) is a parallel import sold by over 70 different dealers. Assuming no major variance in COE rebates/results, the average buyer would probably pay around $10k less for a new Vezel Hybrid.

But he or she wouldn’t get the (conditional) extras bundled with a new Kia Niro bought from Leng Kee motor trade giant, Cycle & Carriage – a 10-year/200,000km engine warranty, a 10-year lithium-battery warranty and proper aftersales service with genuine parts. No parallel importer can ever offer anything like this.

If peace of mind is an important factor, the Kia Niro would beat the Honda Vezel Hybrid, after already beating it with a sweeter ride, healthier performance and greater efficiency. However, the Japanese SUV has a nicer interior, a snazzier exterior and additional safety features. 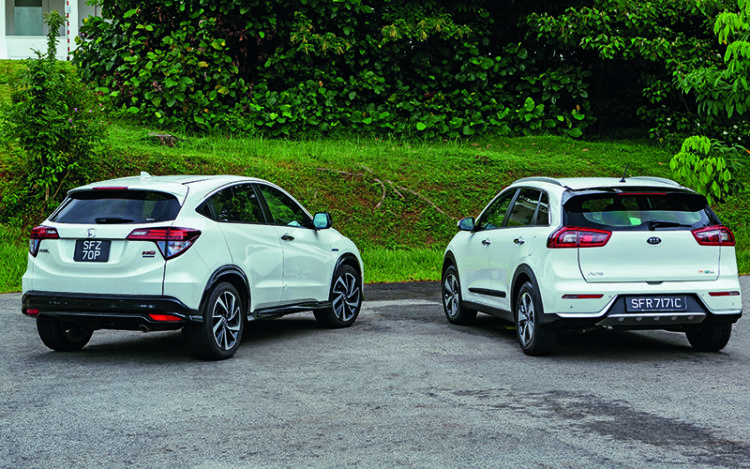