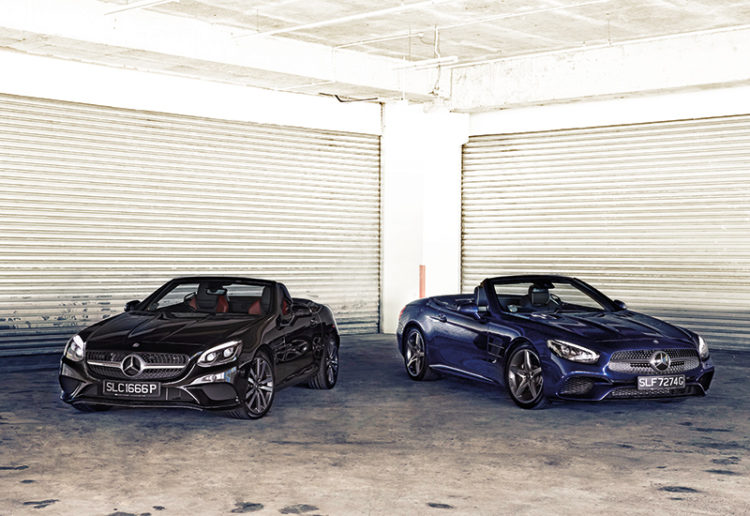 Nowadays, however, there’s a coupe-SUV-sports-car-yacht-kitchen-sink for every conceivable customer, and I don’t know what to think anymore.

The Mercedes-Benz SL-Class, to give it the dignity of its full title, is a reassuring constant amidst this sea of change, the bulwark against the erosion of Mercedes’ romantic splendour from the filling of ever more niches ever lower on the food chain.

For six unyielding generations, it has been the epicentre of Mercedes’ brand identity.

The SL is big, it is glamorous, it means you have arrived and in some style. No further explanation required. 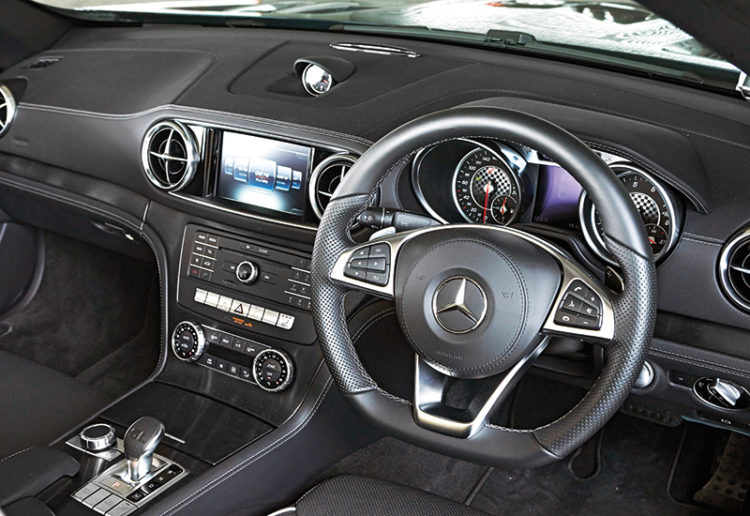 So how do you make a smaller one? As the size shifts, so do the goalposts. Enter the SLC, previously known as the SLK.

Broadly speaking, the SLC is one of many entrants in the premium compact roadster market. Its brief thus would seem simple enough: Be good to drive. Yet, the waters are muddied by its illustrious lineage.

Is it a smaller SL with similar charms, only adjusted for size and price? Or is it most appropriate when regarded as an out-and-out canyon carver? Is it forever “Fann Wong’s car”?

To find out, I meet these two road-star brothers after their mid-life facelifts, just as Mercedes is shifting its entire lineup’s aesthetic drastically from blocky angularity to sculpted, organic lines.

The SL is the bigger beneficiary of the surgery though, as the long, low, powerful stance of the pre-facelift model was spoiled somewhat by awkward, squarish eyes. Grafting on the face of the AMG GT has rescued it from being the family’s ugly duckling to being quite a magnificent swan. 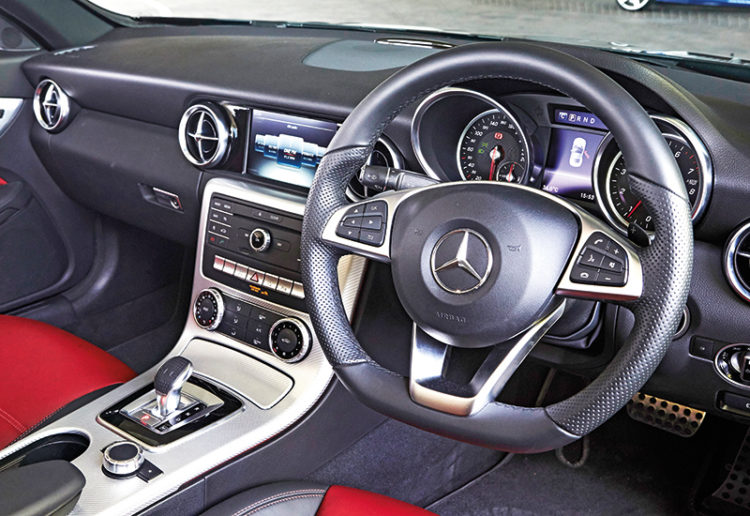 SLC cockpit is less classy and more cosy, and its seats aren’t as supportive as the SL’s.

I have taken all manner of exotic machinery home, but no other machine has engendered as much generous admiration. Yes, even more than a bright orangey red Audi R8. This is because the SL simply oozes class.

The SLC has been given a similar nose job. Yet, being born stubbier means it does not fully escape a slightly lumpen disposition – not words associated with  natural sports car proportions.  This is despite the family resemblance to its sultry sibling being undeniable.

The SL is the automotive equivalent of George Clooney – debonair and irresistibly handsome. Now imagine a version of Mr Clooney who is shorter, plumper and larger of bum, and you can see how elegance does not scale well.

On the inside, again the two cars’ general layouts come obviously from the same gene pool. This DNA, however, is donated by the discontinued SLS rather than the fresh AMG GT and thus looks slightly dated.

Inevitably, the SL interior feels more luxurious, owing mostly to greater spaciousness and a more three-dimensional dashboard structure. To knock the SLC for feeling less opulent than a car costing so much more would be grossly unfair. Recognition is therefore due for a classy and comfortable environment endowed with technology and material richness to spare. 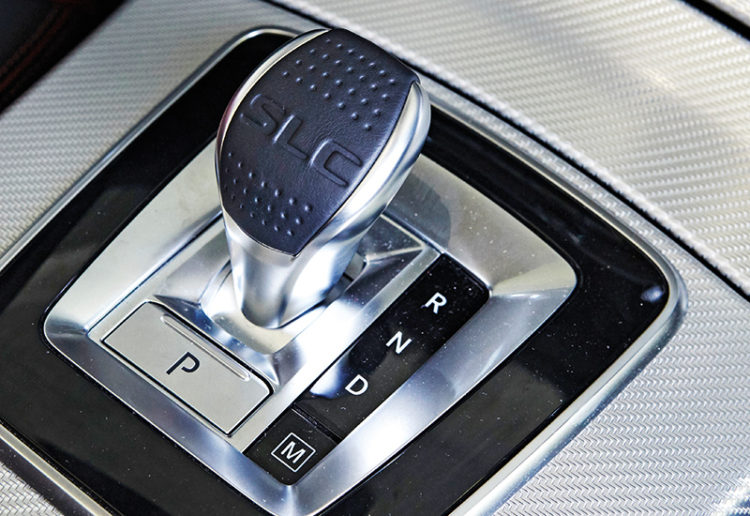 Just don’t brag about it to someone driving an Audi TT with its magnificent minimalism and spectacular Virtual Cockpit. Two things the SLC does noticeably miss from its larger sibling are the very effective retractable wind deflector and seats with adequate lumbar support.

Move out onto the open road and the SL completes my total seduction. The SL400 may have the base engine, a turbocharged 3-litre V6, but it is most definitely not lacking in motive force or throttle response.

Mated to a new 9-speed gearbox that operates mostly invisibly, unless you switch it to Sport mode and deliberately ask to feel the shifts, the big Mercedes is endowed with an addictive ability to surge forward as if being drawn by white steeds on ropes of silk.

In the turns, the SL is agile, with road-devouring composure. Turn-in is sharp and body control collected, despite a bonnet long enough to land drones on. Beneath you, grip is apportioned wonderfully between the wheels, and the centre of gravity is well contained within the axles.

Make no mistake, this big convertible can hustle. Not in the nervous, darting fashion of an MX-5, of course. No, that would be Mercedes heresy. Instead, the SL chews up flowing corners rapidly with a mature, graceful muscularity that reminds you of a blast in the European alps, towards the casinos of Monaco, bow-tie casually undone and a luscious blonde beside. 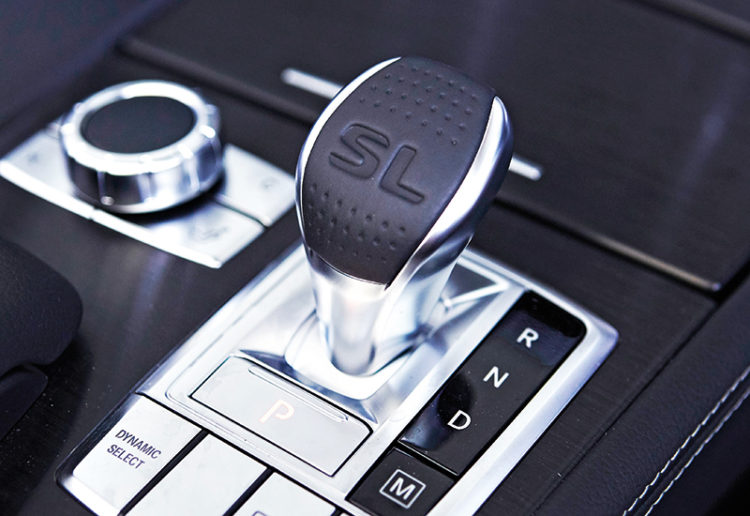 Should you deign to take the bow-tie off altogether, the SL will trouble its electronic nannies gently and predictably, thanks to its long wheelbase and accessible power.

Changing roadsters and charging back to the same roads, it is the SLC’s turn to prove itself.
Here, vertical body motions are disciplined, lateral grip is sufficient, and in broad strokes the car goes where it is told.

Understeer is also resisted well, while roll is progressive and properly controlled. More impressive still is the contact patches’ ability to maintain purchase over bumps mid-corner. My enduring impression of the SLC’s dynamic character is “Competent”.

Why such faint praise? Because the SLC plays in a crowded park, fending off competitors the SL can sail gracefully beyond. The SLC must aspire to Porsche’s 718 Boxster, whilst fending off attacks from Audi’s TT Roadster and even Mazda’s MX-5. It is at the point of this realisation that I must start examining the SLC’s dynamics with a finer-toothed comb.

You would think the SLC’s shorter wheelbase (2430mm) will grant it a noticeable edge in agility against its longer-wheelbase sibling (2585mm), and in some cases, such as very tight roads, that is true. The reality most of the time, however, is that the SLC does not come across as particularly eager to play. 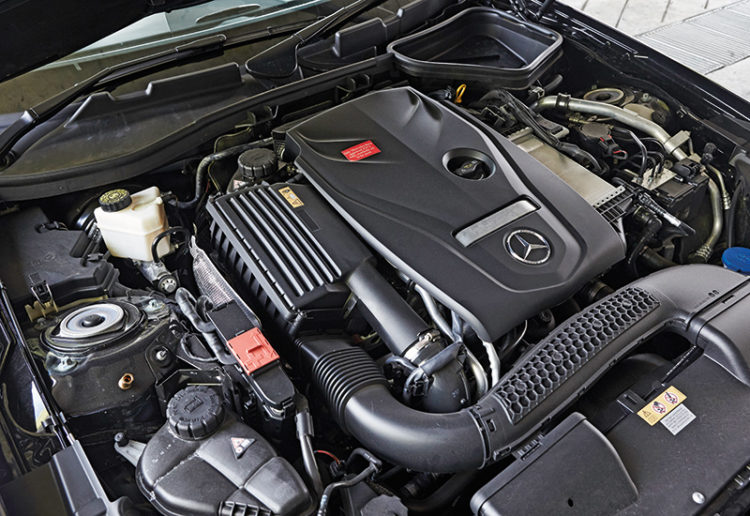 Prod the accelerator and the 2-litre SLC200 increases the volume of its bass boom, but requires a downshift and a pause before heaving forward.

Throw it into a quick left-right transition and the front end bites while the body takes a split second longer to settle, robbing the car of the nailed-down disposition that defines the best sports cars.

This heavyset character is no more apparent than in the steering, which is afflicted with an unfortunate rubbery elasticity.

Thus surprisingly, the SLC never escapes a sense of heft, and piloting it in anger can feel like work. All told, the TT has greater unflappable obedience, the MX-5 has much more effervescent eagerness and the Boxster has more sharpness. 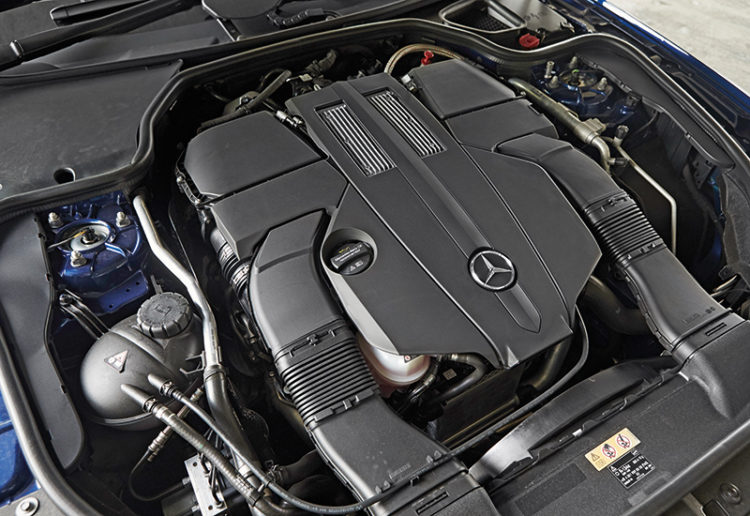 Even BMW’s now defunct Z4, another model similarly torn between boulevardier and sportster roles, is endowed with a more natural rear-driven disposition than the SLC.

Adopt a less hurried attitude, ease off the abrupt inputs and the SLC claws back some goodwill.
When stoked up, the engine feels stronger than its on-paper numbers (184bhp and 300Nm), making light work of city driving and happily gliding past slower traffic. You can hurry along quite briskly and happily at 7/10, even if the SLC lacks the fluency evident in such overflowing abundance in its sublime sibling.

Luxury cannot be truncated, so it is no surprise the SL at 1.6 times the SLC’s price feels and is the richer of the two road-stars. But it is remarkable as the superior sports car, too. 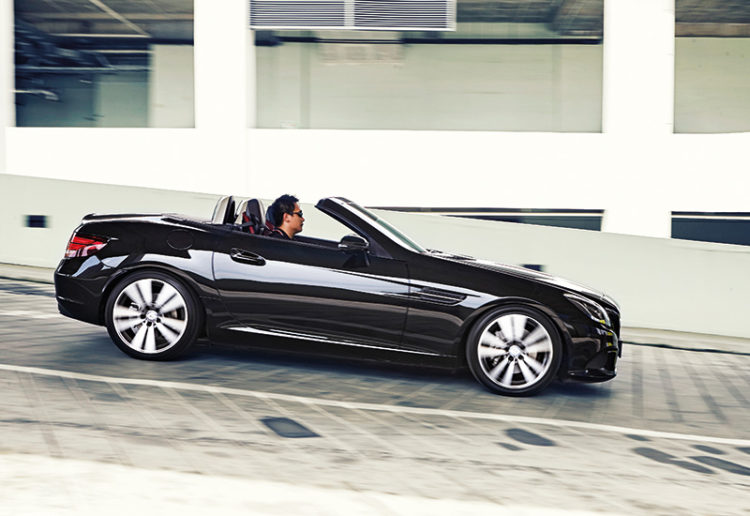 At the end of the day, I am utterly smitten with the SL. And so is everyone I showed it to.
Complaints, and we’re professional complainers, are few and insignificant. The SL’s stop-start system is a little too eager. Open the hard-top when it’s wet and it’ll spill some rainwater on your head. That’s about it.

Like Pierce Brosnan’s James  Bond, who can take out an island of bad guys and emerge suave and unruffled, the Mercedes SL is a car of lovely contradictions. 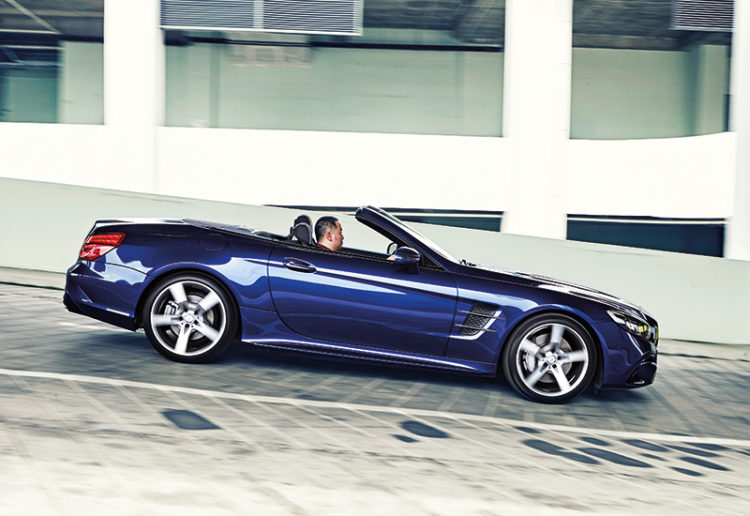 SL400 is silkier and more effortless than SLC200, which doesn’t perform the dual role of boulevardier-and-sportster as skilfully as its sibling does.

Something so large also has no right to move with such effortlessness or handle with such aplomb. The sheer breadth of ability on display means the SL balances beautifully the competing briefs of sports car and luxury car, cossetting and satisfying in equal measure.

With the SL’s strength of heritage and richness of character, few competitors approach its grace and majesty. You can burble up to a royal wedding wearing one of those preposterous hats or enter a racetrack wearing a pretentious helmet, and not look in the least out of place.

This newly facelifted model is a worthy continuation of a dignified line. It’s a road-star which announces not only that you have made it, but that you have excellent taste.

The SL400 is a truly great GT roadster, and in that light, one cannot really fault the SLC200 for not fully filling its big brother’s enormous shoes. 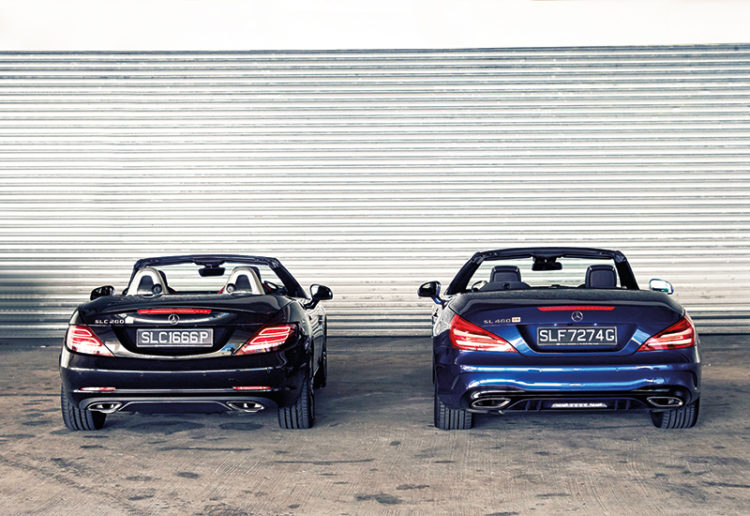