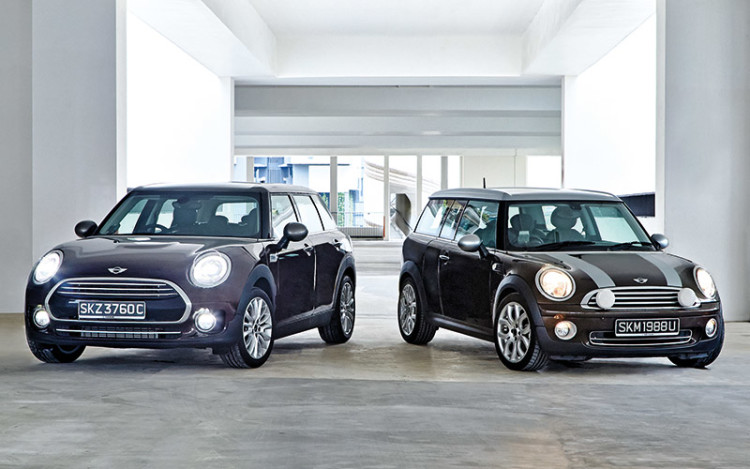 In Singapore’s premium compact hatchback class, the Audi A3 is the science teacher’s pet. Crushingly capable, but with an expression frozen in a stoic bookishness.

MINI’s first-generation R55 Clubman is more like the class clown. Cute, but sometimes takes the joke too far.

With its slightly lengthened wheelbase, curious single rear door and vestigial backseats, the old Clubman falls well outside the segment boundaries, being an oddity that’s a cursory nod towards the idea of motoring pragmatism. It’s for people who desperately wanted a modern MINI, but needed some way, any way, to rationalise the purchase.

Now with its bones from the BMW X1, the new F54 Clubman attempts to emerge from the niche wilderness and appeal as much to your head as your heart. There is also, as I’ll explore further, a pronounced effort at moving upmarket.

I pit it against its impish predecessor to see how stark the differences are, yet how familiar the whole package feels.

With the two Clubmans (or Clubmen, to be grammatically correct) parked side by side, the most obvious change is the fitment of conventional rear doors (on both sides this time) to the new model. 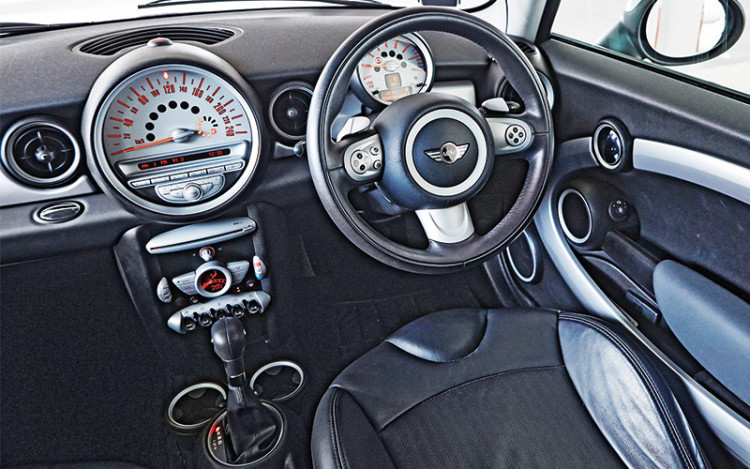 The older interior is less spacious, harder to access and clearly lower in quality, but both “clubs” are hip hangouts.

Step back, take a broader view, and if you still believe a “MINI” should be mini-sized, now is the time to finally abandon that concept.

For the new Clubman positively dwarfs the old one, particularly from behind, where the horizontally oriented design elements emphasise width over the previous car’s vertical style.

This has obvious benefits inside the cabin, where every seat, including the rear middle one, is now a tolerable proposition for most Singaporean-length journeys.

The rear passengers, finally out of purgatory and given their own doors on both sides, even enjoy air-con vents. But a comparatively higher window line makes the cabin feel more ensconced than before, and drivers shorter than 1.5m may wish for a higher seat.

The Clubman has kept its unique “barn door” tailgate, now with the added convenience of being openable with a kick of the foot under a sensor hidden beneath the bumper. Pleasantly surprising, too, are the significant gains in perceived quality. While the plastics in the old Clubman are inevitably moulded into interesting shapes, they’re like cheap furniture – generally hollow and pedestrian to the touch. No such complaints can be levelled at the interior decor of the new Clubman.

This is not to say the Clubman has simply morphed into a BMW 2 Series clubhouse. Union Jacks embossed onto the lock bolts, MINI logos projected onto the ground from the wing mirrors, deliciously quilted seats and, of course, that gigantic light show surrounding the central infotainment display – all these prove that MINI’s penchant to surprise and delight is very much alive.

Speaking of that central display, it is finally freed from pointless duty as a speedometer and now houses a 6.5-inch, prettied-up iDrive module. Value hunters should note that in base Cooper trim, as tested here, the car comes without satellite navigation or smartphone mirroring. In exchange, there’s a funky buffet of colours for the mood lighting, which is always enjoyable.

I pull up – orange light zipping across the dash and hip-hop thumping through the stereo system – next to a grey VW Golf, and never felt younger. 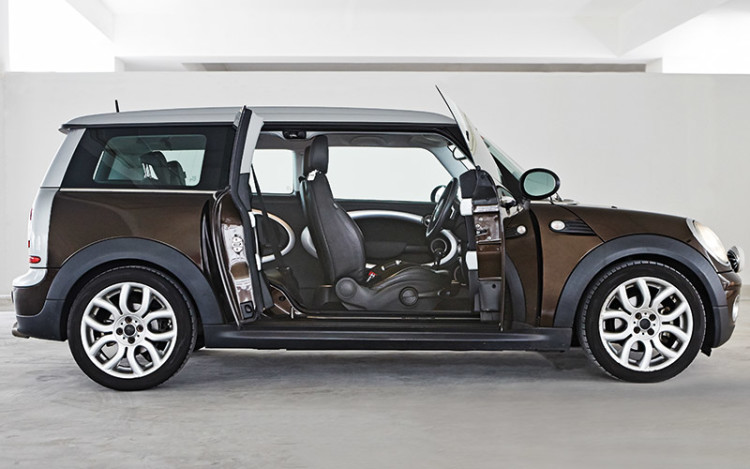 It’s great being fun to look at, but no MINI that isn’t fun to drive is worth its badge. The acid test comes on the road.

The old Clubman is a hoot to dart around town in. It entertains with a sense of irrepressible smallness, and a corresponding ability to go exactly where you want to squeeze it. Like an over-caffeinated Chihuahua, the hydraulically assisted steering and lightning quick reflexes give the car a hilarious, scurrying energy that defines the brand’s dynamic identity.

Inevitably, with the new Clubman’s gains in size and maturity, a bit of that naked hyperactivity has been lost. Instead, you get a comparatively well-damped, hushed ride that allows only sharper jolts to occasionally intrude. 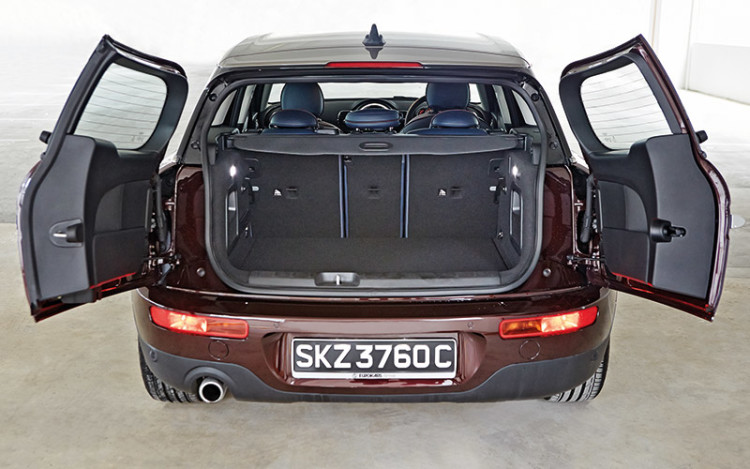 Current Clubman has retained the vertically split tailgate and replaced the old Clubdoor with a pair of proper rear doors.

An A3 conducts itself with a smidgen more nonchalant fluidity, but while your kids can now fall asleep quite comfortably in the back, the MINI’s characteristic willingness to scamper is intact.

The wheels remain pushed out to each corner, initial bite into turns is strong, and BMW’s expert hand is evident in the chassis’ more progressive neutrality while pivoting at higher speeds. No big deficit is therefore incurred in agility, and the new Clubman continues to feel perfectly happy being tossed about on our city streets.

A subtler but still amusing disposition means the new Clubman is a dynamic step forward, one that’s far less wearisome from prolonged exposure. 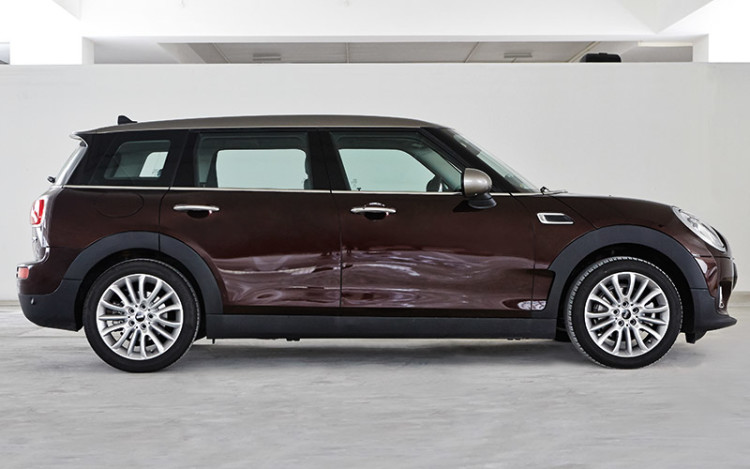 The new 1.5-litre turbocharged 3-pot performs as it does in its BMW 318i and 218i applications, exhibiting torque with authority once spooled up and showing scant shyness in zipping up the tachometer. It is a welcome upgrade on the old 1.6-litre naturally aspirated 4-pot, which, while eager and linear, does tend to generate more commotion than acceleration at full chat.

Endowed with greater practicality and sophistication, the Clubman can now be credibly cross-shopped against peers like the Audi A3 and its volume-brand brother, the Volkswagen Golf.

Does the Clubman beat the Golf and A3 at their own game? Not completely, perhaps, and as with lifestyle products, the Clubman commands a price premium for its aesthetics alone.

But when was the last time a Golf or A3 made you giggle? 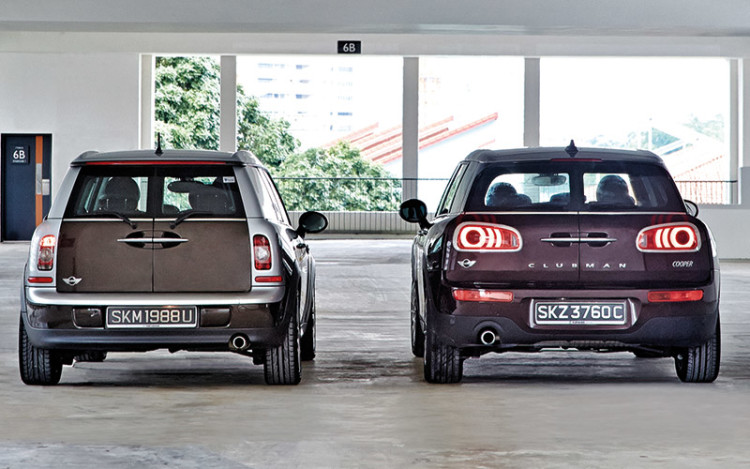