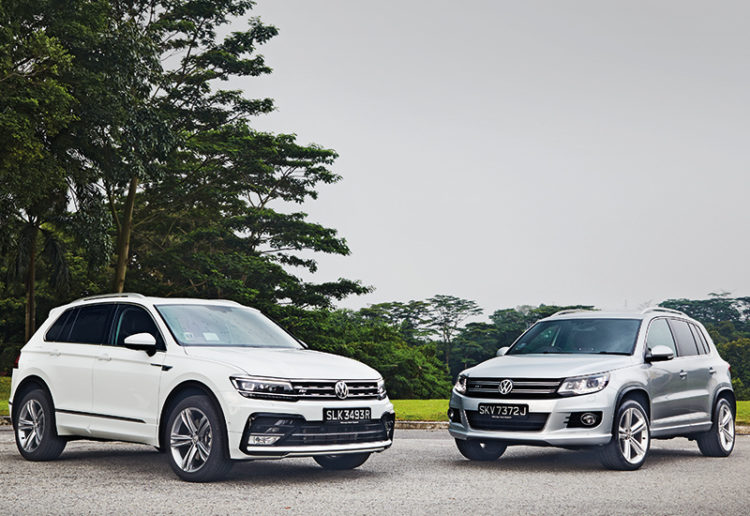 Now, while there are no exotic cars in the mass-market segment, there is one model whose name sounds rather outlandish: the Tiguan.

Introduced a decade ago, the Tiguan’s name is a combination of “tiger” and “iguana”. Hearing this immediately evokes images of a jungle-bashing sports utility vehicle (SUV).

With its tall stance, muscular body and square wheel arches, the first-gen Tiguan certainly looks the part. However, most Tiguan owners probably just use their SUV to conquer concrete forests, and perhaps an unpaved carpark or two.

Volkswagen concluded that since most Tiguans won’t be driven off-road, it would be better to make the second-gen model look more refined and less outwardly macho. This is not to say that the new Tiguan looks feminine. On the contrary, the Tiguan is still very masculine. Its wider grille, sharper lines and less bulbous wheel arches all contribute to this.

The latest Tiguan literally has more road presence, too, thanks to its larger dimensions. The new model is 60mm longer, 33mm lower and 30mm wider than before. Its wheelbase has also been stretched by 77mm for increased interior space.

Having driven the previous Tiguan over the years, it’s hard for me not to be impressed by the new one. The new and old models are as different as night and day.

Although the previous Tiguan’s cabin is durable and functional, it is also unexciting. Luckily, the R-Line model we tested has a flat-bottom steering wheel and alloy pedals, which enthusiasts will definitely appreciate. 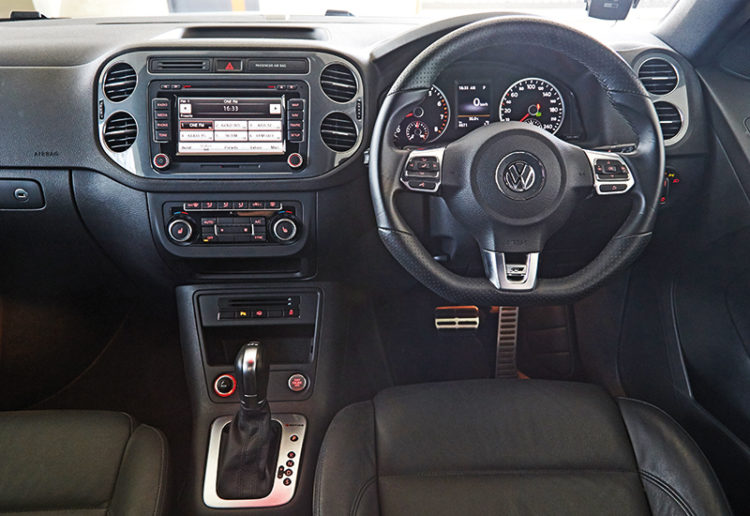 Very few among them, however, will like the old Tiguan’s seating position and air-con vents. Unless you’re around 1.8m tall, the previous Tiguan and its higher dashboard could be challenging.

More infuriating than challenging are the small round air-con vents. Even after constant fiddling, I could never get the airflow in the direction I wanted. They irked me the first time I drove the Tiguan back in 2008, and they still irk me today.

The new Tiguan, on the  other hand, is pleasing from  the moment I settle into the driver’s seat.
This R-Line variant (a 1.4-litre Highline version is also available) comes with a host of bells and whistles. The most impressive of these is the digital instrument panel called Active Info Display.

Instead of staring at analogue gauges, you’re mesmerised by sharp graphics and attractive colours There’s even adaptive cruise control and a head-up display (the first VW model in Singapore with this feature) for added convenience.

To help with parking manoeuvres, the car comes with an Area View function, which gives drivers a bird’s-eye view of the vehicle.

However, with more features come more settings to adjust. If you’re not too IT-savvy, it’ll take longer to get to grips with the new Tiguan than the previous one, which has simpler and more intuitive menus.

Space-wise, the latest Tiguan is more accommodating because of its roomier backseat. Thanks to the longer wheelbase, rear occupants get more legroom and increased backrest recline angles as well. 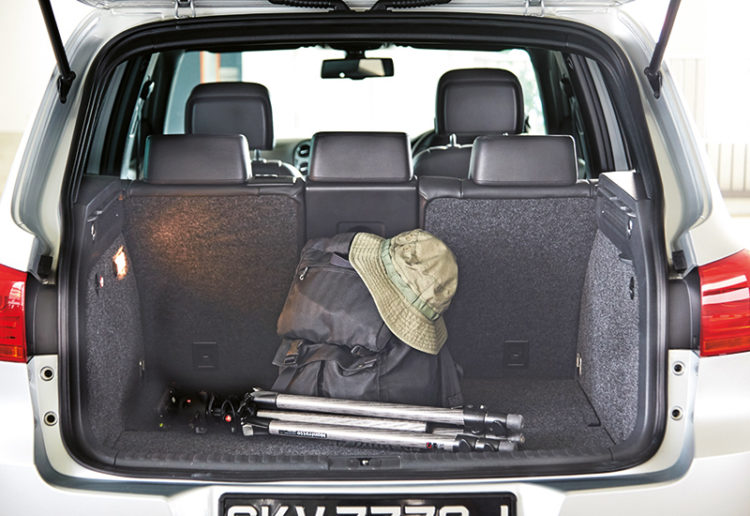 Further improving passenger comfort is the additional climate zone behind. Had VW added a fourth zone, the Tiguan would have been on a par with  luxury SUVs.

Although dated, the previous Tiguan is no slouch in the performance department. The test-car, which has a turbocharged 2-litre motor that churns out 210bhp and 280Nm, can sprint from zero to 100km/h in a respectable 7.3 seconds.

The latest model also has a turbocharged 2-litre 4-pot, but this unit delivers 220bhp and 350Nm, or 10bhp and a significant 70Nm more than before. This extra oomph lets the new VW SUV complete the century sprint in 6.5 seconds, or 0.8 of a second quicker  than before.

What’s really impressive, though, is that the new Tiguan is quicker than the older one despite weighing 173kg more. With all its standard goodies, the latest model tips the scales at a hefty 1862kg. New Tiguan’s 2-litre unit is surprisingly more efficient than before, despite having to pull more weight.

However, this added performance isn’t really felt by the driver, because the new Tiguan is a lot more refined than before. With its stiffer body and better sound insulation, you can’t even hear the engine unless you stretch it close to its rev limit.

In the previous model, the motor is audible once you rev it past 3000rpm.

Refinement aside, the new Tiguan’s power delivery is a lot smoother, too. Acceleration is progressive, unlike in the previous model which has some turbo lag.

The old model’s lighter mass, however, makes it more chuck-able around corners than the new one. In some ways, it sort of feels like a Mk 6 GTI – albeit on stilts.

True to its more gentlemanly nature, the new Tiguan doesn’t reward enthusiastic drivers. Although its lower centre of gravity and wider body make it feel more planted, the latest model is biased towards occupant comfort instead of driving pleasure.

For added flexibility, the new Tiguan has a drive mode selector, which offers Comfort, Normal, Sport and Custom settings.

I prefer the last mode, which is ideal for everyday driving, since I could leave the powertrain in a sportier and more responsive setting while opting for a more pliant setting for the dampers.

If you do have plans to take the Tiguan off-road, the latest model also offers Snow, Off-Road and Off-Road Custom drive settings.

Having driven this SUV on a specially constructed off-road course, I can safely say that with the right tyres and proper driving technique, it’ll be able to handle muddy hills and large potholes with ease.

In comparison, the previous model only has one other drive mode – “S” or Sport, so it’s clear that it is more at home on the road than off it.

The latest Tiguan is an “exotic animal” because it is rare for a mass-market SUV to be this polished. It builds on the strengths of its predecessor by being sportier, roomier and more refined than ever.

In fact, in R-Line spec, it is actually even more compelling than the 2-litre Audi Q3. 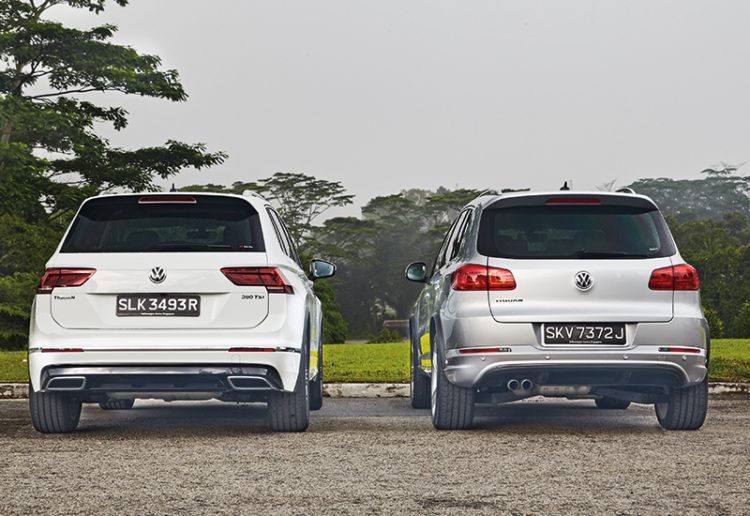