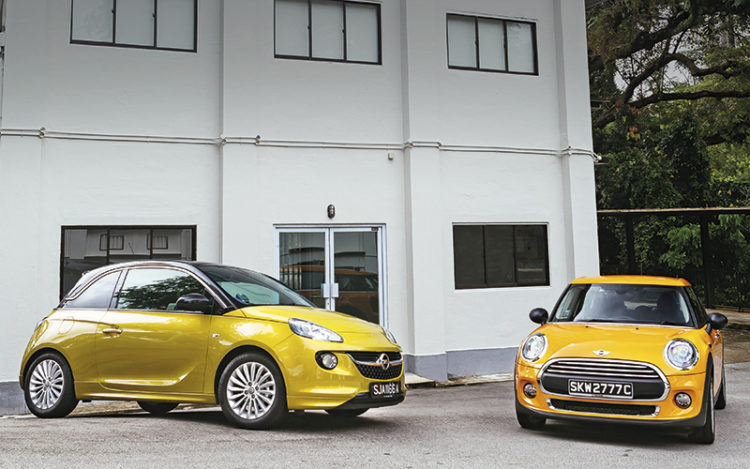 Babies are adorable by default, and so are small cars such as the Opel Adam and MINI One. But being the entry-level models in their respective product families doesn’t mean they can get away with infantile behaviour on the road, childish amenities and immature engineering.

These babies have to be well-developed urban runabouts, driven by adults who have to handle adult situations such as parking, traffic jams and motoring costs.

The pocket-sized Opel and pint-sized MINI help to keep those costs as low as possible with their efficient little engines (1.4-litre and 1.2-litre respectively), which not only save on fuel bills and road tax, but also earn a CEVS (Carbon Emissions-based Vehicle Scheme) rebate of $10,000 that reduces their base price.

But it’s not only the price gap between the Adam and One that will give potential buyers pause for thought. My focus here is the original One, even though these pages show the five-door version (the MINI dealership couldn’t arrange the three-door in time for this photoshoot).

Style is subjective, perhaps, so it’s up to you to decide whether the Adam looks more awesome or the One looks more wonderful. But objectively speaking/seeing, the Adam is the more eye-catching vehicle.

The Opel’s proportions are more toy-like (much shorter from bumper to bumper, a bit narrower and a lot taller than the One), its radiator grille “grins” more cheerfully and its bodywork has a lovelier variety of designer details (check out the creative bodyside creases, distinctive chrome-trimmed roofline and likeable rear lights).

The Adam is more colourful, too. The One comes with four paintwork choices, whereas the Opel is available with a rainbow palette of 12 colours, some of which have corny names which match the car’s kaleidoscopic personality – Greenspotting, Purple Fiction, Pink-Kong and Goldbusters (our test car’s colour). In addition, the Adam’s roof can be specified in either black or white for a two-tone appearance, so this “colouring contest” is easily won by the Opel.

But in the cabin competition, the Adam is clearly beaten by the MINI. Opel seems to have spent most of the design budget on the exterior, because the interior is far less interesting. 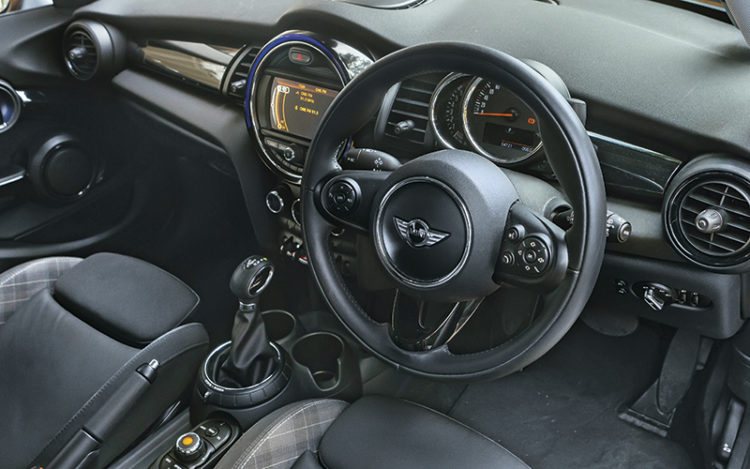 MINI One’s cabin is more spacious and more special than the Opel Adam’s.

Attempts to jazz up the cockpit are limited to bright scarlet illumination for the instrument cluster, red meter needles that swing clockwise and back again upon start-up, a few sparkly silver accents, and a funky texture for the dash-top.

The materials and switches are hijacked from ordinary Opel hatchbacks produced in the same factory, and the build quality is in the “shopping trolley” category (sturdy but nothing special).

The MINI’s interior is superior. There’s far more flair, a longer list of equipment and a noticeably higher standard of construction. It’s like comparing Orchard Road with Adam Road.

For instance, the MINI’s cloth-plus-leather seat upholstery feels classier and costlier than the full (locally done) leather trim of the Adam’s seats, every cockpit control in the MINI feels more solid than its equivalent in the Adam, and the MINI’s overhead grab bars slip back to their original position instead of snapping back like in the Adam.

The One is also better equipped than the Opel. For example, the MINI’s automatic air-con is a two-zone system (so the driver and co-driver can set their preferred individual temperatures) versus the Adam’s single-zone system, the MINI gives a choice of six ambient-lighting options (none in the Adam), and the MINI has keyless push-button ignition (the Adam’s engine is started with a key in a keyhole). 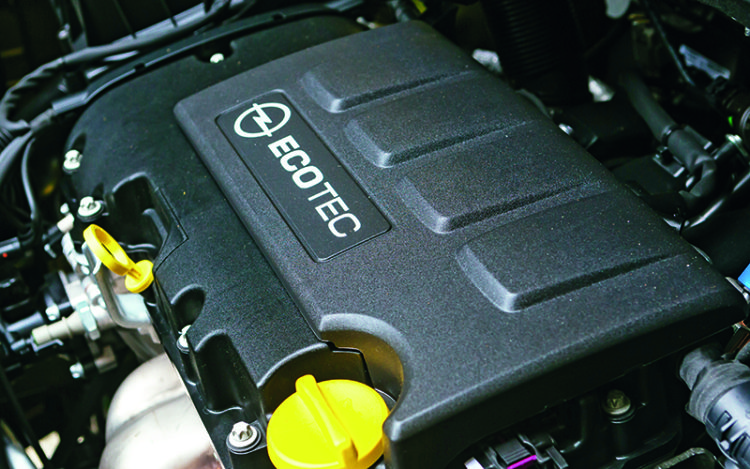 The infotainment battle between the two cars, however, is inconclusive. Both have Bluetooth, USB, AUX, a useful trip computer and a delightful, idiot-proof display. But the Opel’s touchscreen is easier for idiots to play with than the MINI’s multi-button system, the Opel has two more loudspeakers (six) which are also louder, and the Opel has a four-tyre pressure monitoring system instead of the MINI’s simpler run-flat indicator.

For some reason, the radio reception sounds patchy and the reverse sensors sound uncertain in the Adam.

Space-wise, the One is obviously one up on the Opel. Front occupants in either vehicle wouldn’t complain about headroom (decent) and leeway (adequate) in their section of the cabin, but rear occupants in the Adam would grumble about the tighter squeeze.

Squeezing a fifth adult onto the backseat would be terrible in the Adam and bearable in the roomier One, whose longer wheelbase (2495mm versus 2311mm) is an advantage.

The One has a bigger boot, too. It can carry 211 litres of stuff, compared to 170 litres in the Opel. Neither trunk is meant to transport a kitchen sink, but the One can take a few more kitchen appliances than the Adam. 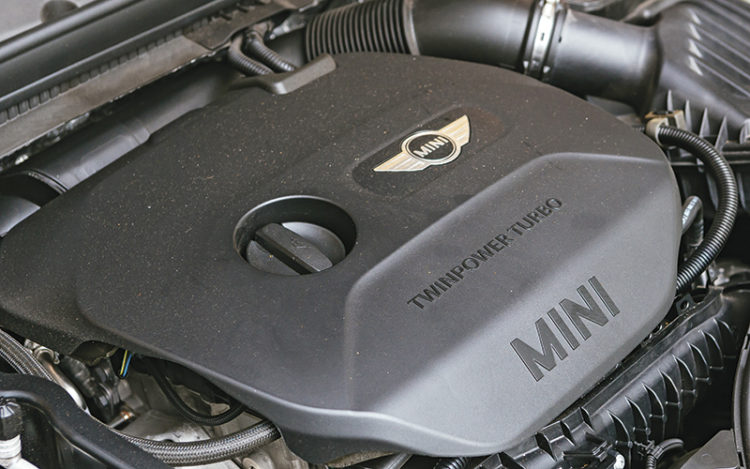 Both boots can be expanded by folding down the backseats, but the One, again, offers a larger cargo capacity (731 litres versus 633 litres). And the One’s rear seatbacks are velour-covered, whereas the Adam’s are metal, with unusual circular patterns to look less cheap.

The One has a bigger and more evenly shaped glovebox. But odds and ends can be stowed conveniently enough in the Adam’s cabin, which has sizeable storage bins, capacious seatback pockets and handy triple cupholders.

The MINI is the better “roadholder”, though, and it starts with a driver’s seat that is more supportive, right down to the thighs parked comfortably on the extendible squab (the Adam doesn’t have this feature). And the driver gets a footrest, which the Adam lacks.

Visibility from behind the wheel is clearer in the MINI, thanks to its squarer glasshouse and less blockage of lateral views by pillars and headrests. So it’s easier to see where you’re driving quickly and to sight round a quick corner.

The One is quicker, and merrier, than the Opel from point to point – unless said points are in cramped carparks which the Opel can tackle even more happily than the One, because it can turn on a 10-cent coin (9.8 metres), which is smaller than the 20-cent coin (10.8 metres) the One turns on. And with a press of a button, you can make the Opel’s power-assisted steering even lighter and, thus, facilitate speedy three-point turns. 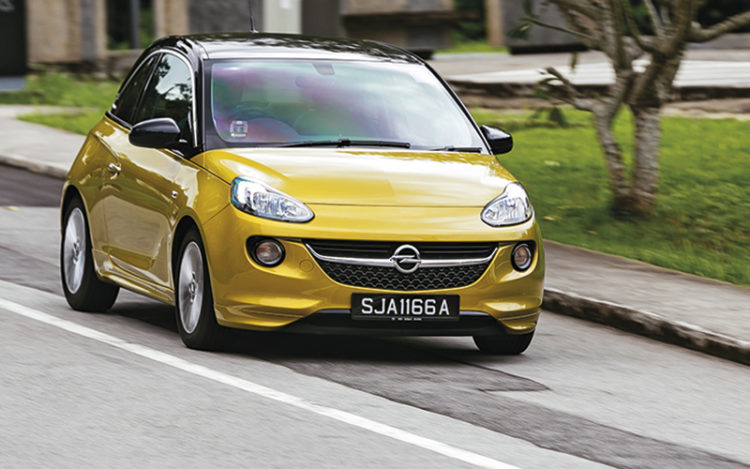 Out of the carparks and onto the streets, roads and highways, the MINI is a much nicer drive, with a much better gearbox that has one more gear (six versus five), greater responsiveness between and within gear ratios, and greater refinement when auto-driving in D.

But the Adam has its moments. Its robotised transmission works naturally well in manual mode; it revs cleanly, right up to 6500rpm where an “Engine Overspeed” warning would appear; and its 87 ponies pull the light carriage along with some enthusiasm, which seems to increase within the engine’s 3000-5000rpm sweet spot.

The Adam is also damn fun to punt through corners, even though it’s neither going fast nor gripping hard – it just hangs on and plays on, and on, and on.

The One is less playful, but more enjoyable as a whole. When the driver hits the time and place for playing, the One plays along and its turbo 3-pot performs, revving with an offbeat gusto that belies the motor’s 1.2 litres and 102bhp. The car steers neatly into every road bend, leans just enough to relay the cornering momentum, and exits the road bend as neatly as it entered.

When playtime is over, the One reverts readily to city-cruiser mode, which it does better than the Opel – the MINI’s ride is quieter and gentler on smooth and broken tarmac-surfaces alike, the MINI’s seats are more relaxing, and the MINI’s cabin air-conditioning is more effective.

After all that cuteness ruckus, which hatch is the better catch? The One, in my opinion. But the MINI costs $21k more than the baby Opel, so it’s understandable if the hip urbanite saves the cash and settles for the Adam. 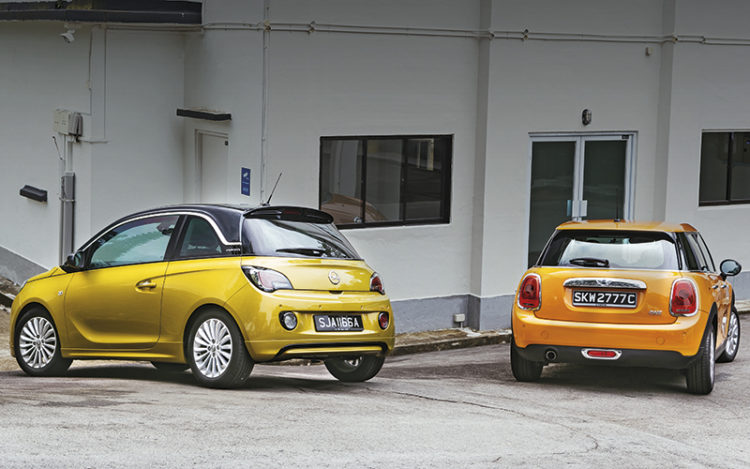