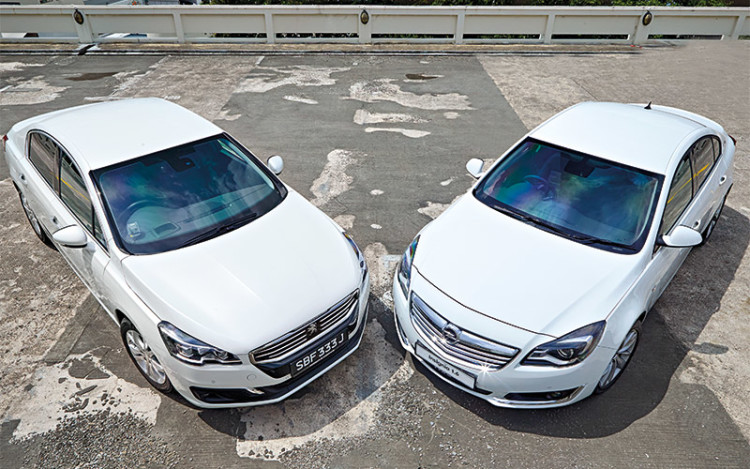 The French have always been famous for making stylish and quirky vehicles, whereas the Germans are more known for creating sensible but not always exciting cars.

When Peugeot launched the 508 saloon four years ago, it was a shock to many. But the jolt wasn’t because Peugeot had produced a mid-size saloon (the 508 replaces the smaller 407 and larger 607 models) – it was the fact that instead of looking avant-garde, the 508 actually has a conventional design that attracts rather than alienates buyers.

The Opel Insignia, launched in 2009, was also a breath of fresh air. Its “blade” styling language was not only unique but dynamic, too. It made older Opel models look staid, and caught the eye of buyers. But while the 508 was available with a turbo 1.6-litre, the Insignia’s sole powertrain in Singapore was a turbocharged 2-litre engine.

The updated Insignia, which arrived earlier this year, is now only offered with a turbocharged 1.6-litre 4-cylinder. The changes made to the car’s exterior are subtle – the front grille is now larger, while the chrome strip running across the boot lid is wider.

The styling tweaks to the 508, on the other hand, make it look more assertive compared to the older model. The front end features new LED headlights (which replace the HID units on the pre-facelift model) and a redesigned grille. 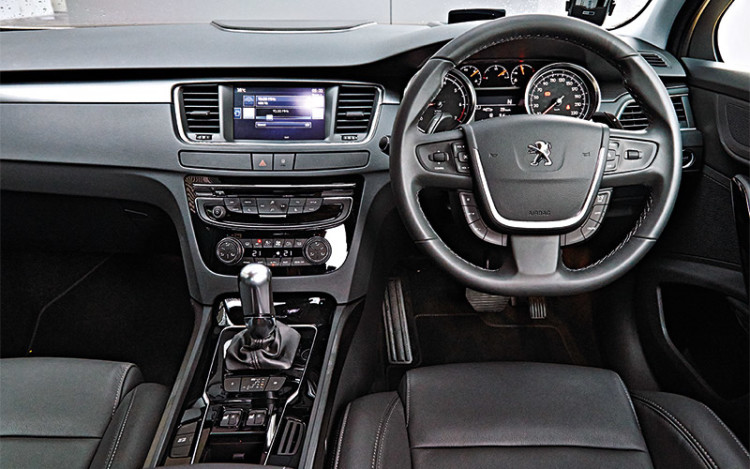 Even more significant than the exterior tweaks are the upgrades to both cars’ interiors.

The cabin of the pre-facelift 508 would have been impressive if its infotainment system isn’t so dated – the orange graphics and lack of a sat-nav function are the main bugbears.

The latest 508 is equipped with a much nicer infotainment unit, complete with a colourful 7-inch touchscreen and satellite navigation. Like its predecessor, this car also has a head-up display to make drivers feel like fighter pilots. 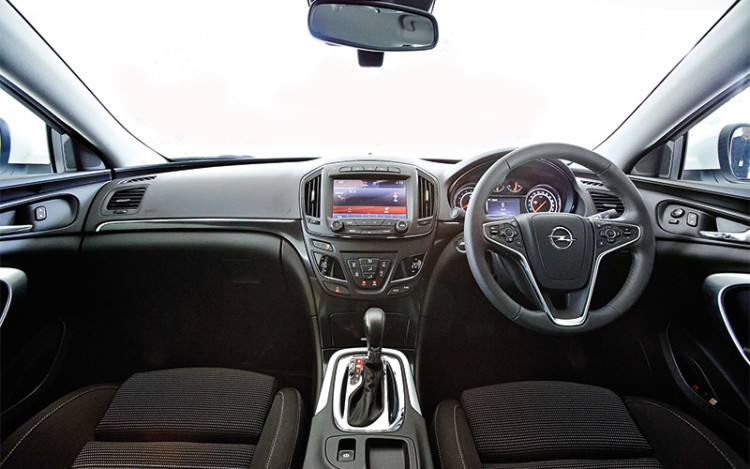 Like the Peugeot, the Insignia also sports a snazzy new infotainment system. In addition to that, the Opel also has a new instrument panel with a nifty 4.2-inch secondary display called the Driver Information Centre. Making the Insignia feel even more upmarket are its newly digitised air-con controls with dual climate zones. The preceding model sold here only has analogue controls and a single climate zone.

The 508 trumps the Insignia in terms of occupant space, though. Thanks to the former’s 80mm-longer wheelbase and flatter rear floorboard, backseat passengers in the Peugeot have more room to stretch out. The Opel, on the other hand, not only has less legroom but lower headroom, too, due to the sloped roofline. 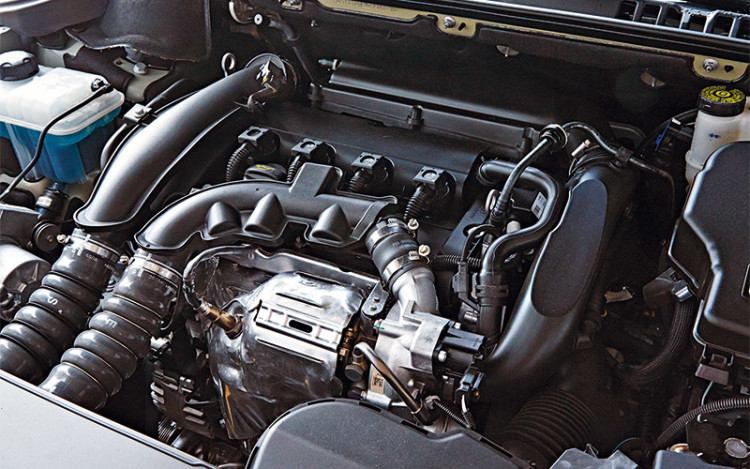 The Insignia’s seats, however, are more supportive than the 508’s, making it the more comfortable option for long drives.

Between these two contenders, it is the 508 which is more practical, as the storage points in its cabin are more generous than the Insignia’s. Further adding to the Peugeot’s usefulness is its boot capacity of 545 litres, which is 45 litres more than the Opel’s. 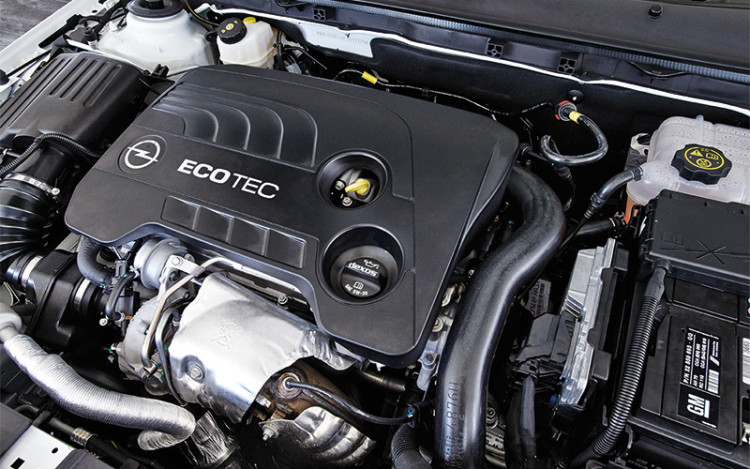 Although both cars are equipped with turbocharged 1.6-litre 4-cylinder engines with nearly similar outputs (163bhp for the 508 and 170bhp for the Insignia), it is the French car that is more athletic. Key to this Gallic saloon’s performance is its lighter kerb weight – 1410kg versus the Insignia’s 1580kg.

The 508 thus has a higher power-to-weight ratio, which also contributes to its better efficiency, with a claimed 17.2km per litre versus 15.2km for the Insignia.

Between the two cars, it’s the 508 that’s not only quicker from zero to 100km/h, but more agile when cornering as well.

While the Insignia isn’t as dynamic as the 508, it makes up for this by being more refined. The Opel’s 6-speed automatic is smoother than the Peugeot’s, and its ride quality is more pliant as well. 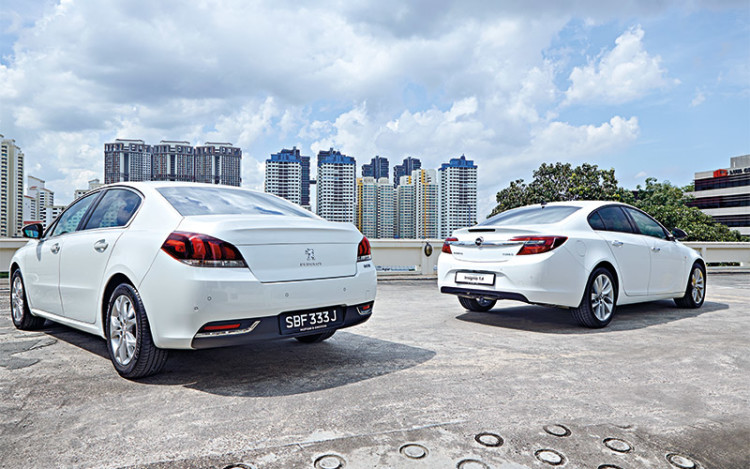 The Insignia’s cabin seems more solid, too – not only is it better insulated, its doors are heavier and require more effort to open/close.

All told, the 508 suits the keener driver, while the Insignia caters to the motorist who places greater priority on motoring refinement.

Ultimately, it doesn’t matter whether the buyer opts for the Gallic contender or its Teutonic competitor, as either choice is likely to be a fantastic one.